Heigl was labeled "difficult" and "unprofessional" after speaking out in 2009 about the extremely long production hours the cast and crew had to endure on "Grey's Anatomy."

After six seasons and one candid interview, Katherine Heigl found herself effectively “blacklisted” from the industry for perhaps speaking a truth no one was ready to hear or acknowledge?

That’s what Ellen Pompeo is suggesting on the latest episode of her “Tell Me with Ellen Pompeo” podcast with “Grey’s Anatomy” co-star Kate Walsh. Heigl worked alongside Pompeo on the first six seasons of the ABC medical drama and was one of the show’s breakout stars. 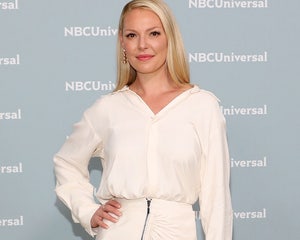 She was also one of its more outspoken stars, with Pompeo recalling the incident that would change the trajectory of Heigl’s career. It was in 2009, a year before Heigl would quit the series, during an appearance with David Letterman on “Late Night.”

“I remember Heigl said something on a talk show about the insane hours we were working,” Pompeo recalled. “And she was 100 percent right.”

During her appearance, the “difficult” (as she was pegged then) Heigl very candidly spoke out about the working conditions. She told Letterman, “I’m gonna keep saying this because I hope it embarrasses them,” per the New York Post.

She went on to say that she’d just finished a 17-hour work day, which she called “cruel and mean.”

“Had she said that today, she’d be a complete hero,” Pompeo said. “But she’s ahead of her time, made a statement about our crazy hours and, of course, let’s slam a woman and call her ungrateful.”

Further, Pompeo backed Heigl after all these years, saying that her former co-star right about those long hours. “And she was f—ing ballsy for saying it,” Pompeo said. “And she was telling the truth. She wasn’t lying.”

For decades, it’s almost been understood that many television and film productions have brutally long work schedules, but it was just something people glossed over or accepted as part of the price you pay to work in the industry.

Instead of being lauded a hero, Heigl would see her burgeoning film career dry up even as she said goodbye to “Grey’s Anatomy” to shift her focus there.

She was publicly labeled “difficult” and “unprofessional,” per The Hollywood Reporter in 2013, with it also being noted it was problematic the she publicly aired grievances. The upward trajectory of her career stalled, reversed and never recovered.

Heigl defended herself in an op/ed for The Washington Post in 2021. In the wake of the #MeToo movement, modern audiences had begun recontextualizing the experiences of women in Hollywood in light of exposed truths about the industry.

In it, she blames her public comments about the industry for her getting labeled first “ungrateful” and then escalating that to “difficult” and “unprofessional.” All of that equated to Heigl effectively getting “blacklisted” in Hollywood for speaking not just her truth, but according to Pompeo, the truth.

You can check out the full episode with Pompeo and fellow “Grey’s” co-star Kate Walsh below: