According to new reports, the E. coli outbreak linked to romaine lettuce has spread to 22 states, and the reach seems to be widening.. The U.S. Centers for Disease Control and Prevention announced on Friday that, so far, a total of 98 people across 22 states have gotten sick from eating contaminated romaine lettuce, BuzzFeed reported. Since last week, an additional 14 people and three new states — Wisconsin, Tennessee, and Mississippi — have been reported affected by the E. coli tainted greens, according to BuzzFeed.

The CDC reports that the most recent illness started on April 20, but that illnesses reported in the last two to three weeks may not have been tallied yet, so the number of people affected by the outbreak could be higher still. The CDC further states that all information collected to date indicates that the contaminated lettuce is coming from the Yuma, Arizona growing-region, and that this particular strain of E. coli is known as O157:H7, which causes vomiting, bloody diarrhea, and cramps within four days of eating contaminated food. CNN reports that, according to a CDC statement on Friday, “CDC laboratory testing has confirmed that the strain of Shiga-toxin producing E. coli O157:H7 causing this outbreak produces a type of toxin that tends to cause more severe illness, which may explain why there is a high hospitalization rate.” CNN stated that 46 of the ill patients — about 53 percent — have been hospitalized, which is a higher rate than the approximately 30 percent that’s typical for E. coli outbreaks. 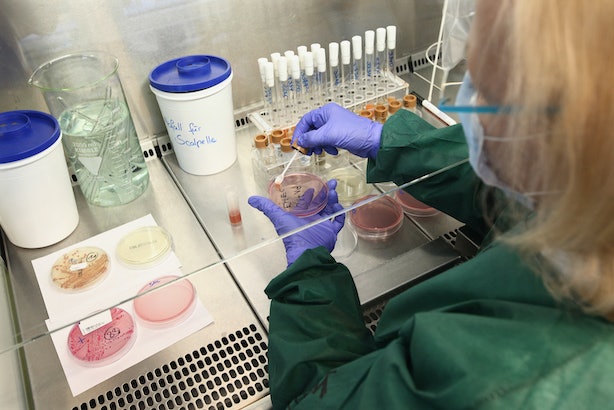 CNN further reports that ten of the hospitalized patients have developed hemolytic uremic syndrome — a type of kidney failure associated with E. coli infection. BuzzFeed notes that the symptoms of hemolytic uremic syndrome may include fever, fatigue, decreased urination, and bleeding or bruises; complications can include kidney failure, high blood pressure, and neurological problems. The affected patients range from ages 18 to 87, and three of them are children, the CDC reports.

While chopped romaine lettuce — sold alone, or as part of salad mixes — was initially thought to be the problem, the warning was expanded last week to include all types of romaine, including whole heads, baby romaine, organic varieties, and hearts of romaine, as well as any salads or salad mixes containing romaine lettuces, according to BuzzFeed. The warning was updated after a group of inmates at an Alaskan correctional facility got sick from eating meals containing whole romaine lettuce. Matthew Wise, deputy branch chief for outbreak response at the CDC said at a recent press conference that “people should still not eat any type of romaine lettuce unless they know for sure it does not come from the Yuma-growing region,” BuzzFeed reported. The CDC also notes that packaging labels don’t always identify the growing-region, and consumers are advised to exercise extreme caution.

The total list of affected states now includes Alaska, Arizona, California, Colorado, Connecticut, Georgia, Idaho, Illinois, Louisiana, Michigan, Mississippi, Missouri, Montana, New Jersey, New York, Ohio, Pennsylvania, South Dakota, Tennessee, Virginia, Washington, and Wisconsin, according to BuzzFeed. The CDC states that while the affected growing region has been identified, the exact source of the contamination is still unknown, and a lot of uncertainties remain — experts know the general location of the outbreak’s source, but they still haven’t determined the farm or farms responsible for the contamination. They also don’t know if the contamination occurred during the harvesting, packaging, or distribution stages of the greens.

This is the largest and most dangerous E. coli outbreak of its kind since the spinach-linked outbreak in 2006, but, as CNN notes, unlike spinach which is often cooked, romaine lettuce is a more common culprit in E. coli outbreaks since it’s eaten raw. Fortunately, there have been no deaths associated with this outbreak.