A 67-year-old man’s fleshy ‘balloon cyst’ releases ‘rusty water’ contents as he has it removed and popped on Dr Pimple Popper.

In tonight’s episode of the show, which airs on TLC, Dennis, from the US, explains how he has been living with four giant, fleshy bumps on his head for over 30 years.

‘This is the bump on the back of my head,’ he says, wobbling the enormous, ball of tissue.

‘As you can see, it is very loose. The bump on the top of my head has been there for 30 years, the big bump on the back is probably six years old.’ 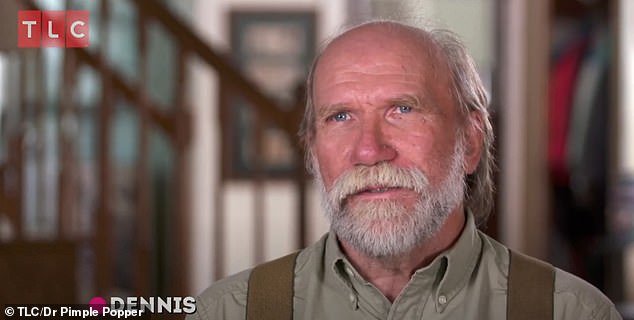 In tonight’s episode of TKC’s Dr Pimple Popper, Dennis, 67, from the US, explains how he has been living with four giant, fleshy bumps on his head for over 30 years 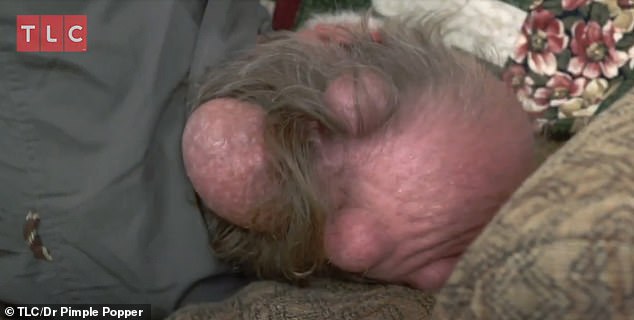 The largest of the bumps (pictured) is the growth that causes Dennis the most trouble, particularly at night

Looking like a swollen balloon, the largest of the bumps is the growth that causes Dennis the most trouble, particularly at night.

‘I bet it weighs every bit of a pound,’ he claims. ‘When I’m sleeping on my back, the pillow pushes on the bump on the back. I used to say I could sleep through anything. Today, laying down really hurts.’

To try and hide the bumps as best he can, Dennis reveals that he doesn’t leave the house without wearing a hat.

‘I have a good relationship with baseball hats because they cover the three bumps that I have real well,’ he explains. ‘The problem with that theory though is the bump on the back of my head is out there for everybody.’

While he’s tried to remain optimistic, Dennis admits that he can’t help but feel self-conscious when he goes out in public.

‘When people are staring, I feel vulnerable,’ he says. ‘One time I told a little kid that I had a second brain and he didn’t know what to think!’ 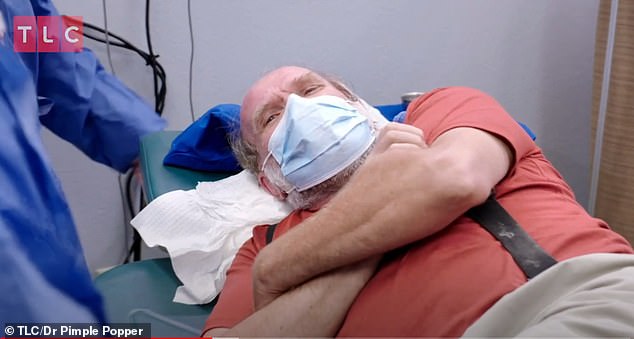 After 30 years of putting on a brave face, Dennis is finally ready to make a change – and goes to see Dr Pimple Popper 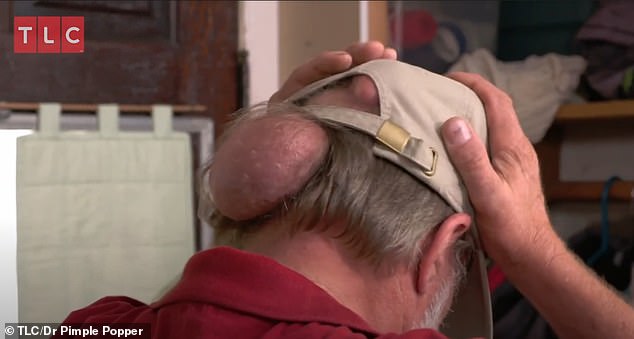 While he’s tried to remain optimistic, Dennis admits that he can’t help but feel self-conscious when he goes out in public (pictured)

After 30 years of putting on a brave face, Dennis is finally ready to make a change.

‘As much as you say it doesn’t bother you, you can only take so much,’ he says.

As well as the stress the bumps have put on himself and his doting wife Donna, one of the biggest obstacles the bumps pose for Dennis is that they stop him pursuing his biggest passion: motorcycling.

‘Motorcycles have been in my life since 1971, you can experience everything,’ he says. ‘I haven’t rode for a long time because the equipment doesn’t fit correctly. I should be enjoying things more than I am today.’

Despite only visiting the doctor a handful of times in his life, Dennis decides to put his faith into Dr Sandra Lee to see if she can put a stop to his 30-year-old headache.

‘I’m here today at Dr Lee’s office, with a little bit of anxiety,’ Dennis says. ‘My wife Donna, she’s been a real force to get me to have this done, and I don’t know if I’d be here if it wasn’t for her. I’ve waited 30 years so I hope that it ends up being taken care of.’

WHAT IS A PILAR CYST?

Pilar cysts are common growths that form around a hair follicle, and are typically found on the scalp.

They form because the cells in the top layer of skin produce keratin, the protein that gives skin its strength and flexibility.

Normally, these cells move up to the surface of the skin as they start to die, so they can be shed.

But sometimes, these cells can move deeper into the skin and multiply, forming a sac – a ‘bag’ filled with fluid.

They secrete keratin into the middle of the sac, which forms a thick, yellow paste. This can ooze out of the cyst if it is burst.

Unlike other types of cysts, pilar growths strongly run in families, and are largely harmless.

They typically affect middle-aged adults, and women more than men.

After introducing herself, Dr Lee gets right down to business and inspects Dennis’s lumps.

‘Even from six feet away, these bumps look bigger than they did on the call,’ Dr Lee says. ‘I think this is probably a pilar cyst, it’s just got softened.’

Looking at the biggest bump, located on the back of Dennis’s head, even Dr Lee, a veteran of the dermatology world, is taken aback by the sheer size and weight of it.

‘My goodness, I mean I don’t know what’s in there but if this is a pilar cyst then it’s the most giant pilar cyst that I have ever seen,’ she gasps.

Hoping to remove all of Dennis’s lumps, Dr Lee goes back inside her clinic to get scrubbed up.

While he’s excited to see what Dr Lee can do to help him, Dennis admits that his fear of the doctors is starting to creep up on him.

‘I would be lying if I said I didn’t have a little anxiety, because it’s still an operation.’

With Dennis numbed up, Dr Lee gets to work on removing the big, fleshy bump on the back of his head.

‘I think it’s a water balloon cyst,’ Dr Lee says as she makes the first incision.

As she snips away at the fibrous cyst tissue, Dr Lee soon realizes the extent in which the cyst is tethered to Dennis’ head, meaning this will be no easy procedure.

‘It’s not hooked to my brain, is it?’ Dennis asks, keeping calm.

Due to the delicate skin on Dennis’ head, there’s more bleeding and pus than Dr Lee would like to see.

‘When I am lifting this big tumour off of his scalp, I’m seeing a lot more bleeding there, so I am really trying to be very meticulous in cauterizing areas and even tying off blood vessels,’ Dr Lee comments.

After a tricky surgery, Dr Lee manages to free the giant, sagging lump from Dennis’ head.

‘I’m really pretty proud of myself that I removed it in one piece without rupturing it, even though this one was pretty big,’ Dr Lee says happily.

Popping the lump on the scales, Dr Lee is astounded by how heavy it is.

Feeling much better, Dennis will have to wait a few more days before Dr Lee can tackle the other lumps.

Showing off the dismembered lump to Donna, Dr Lee slices into the boulder of flesh, releasing a fountain of disgusting, rusty liquid. 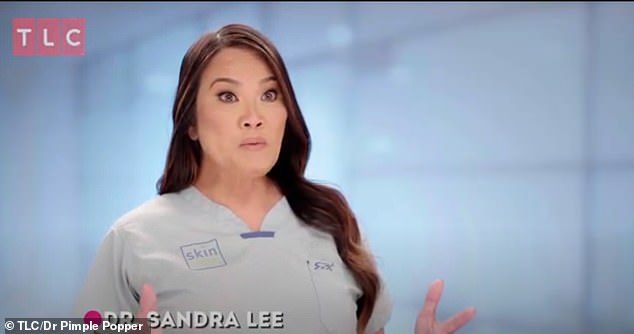 Looking at the biggest bump, located on the back of Dennis’s head, Dr Lee (pictured) is taken aback by the sheer size and weight of it

‘I told him he had a big water balloon back there and I was right!’ Donna says triumphantly.

Returning a few days later, it’s time for Dr Lee to remove the final trio of lumps. Scalpel in hand, the expert gets back to it, cutting and slicing into Dennis’s cysts. But again, it looks like Dr Lee is in for the long haul.

‘Dennis’ cyst is completely stuck to his head,’ she says. ‘I’m afraid this is not going to be the simple procedure I was hoping for.’

After popping one of the cysts, Dr Lee squeezes out it’s 30-year-old, gooey contents.

‘What are you gonna call this, old egg salad?’ she jokes.

Dr Lee even has to ask her assistant to provide another gauze, as the river of pus continues to flow from Dennis’s head.

‘It’s like honey mustard,’ Dr Lee’s assistant says, getting in on the action. Eventually, the expert manages to remove all of Dennis’s cysts, and Dennis is thrilled with the results.

‘Dr Lee changed my life because I don’t have to live with these bumps anymore,’ he says. ‘It’s an amazing sight just to see my head without the bumps.’ And a few weeks later, Dennis is even able to get back on his motorbike!