Cyber experts have warned foreign state actors may have infiltrated critical Australian infrastructure such as water or power systems and are lying dormant to potentially wreak havoc in the event of a conflict.

States such as Russia, China and the United States are widely suspected of having used cyber attacks against their enemies and in recent days teachers in NSW were forced out of their emails and online classroom technology, though the source of the incursion has not been revealed. 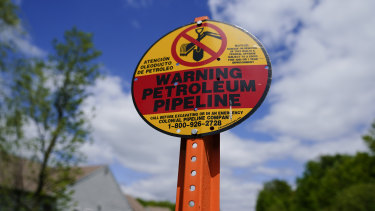 A key gas pipeline in the United States was forced to shut down in May after hackers gained access to its operator’s network.Credit:AP

“Given the capability that we’re up against and the fact that other states perhaps wouldn’t be doing their jobs if they weren’t trying to do that [against Australia], our adversaries, it’s going to be perhaps nearly impossible to eradicate that threat,” Mr Hanson said. “So I think it’s a hopeless task to try to completely eradicate that threat. But it’s not a hopeless task to be resilient to come back if we are attacked.”

Mr Hanson was giving evidence under questioning from James Paterson, a Liberal Senator and chair of the Parliamentary Joint Committee on Intelligence and Security, which is examining a potential new law to toughen Australia’s defences against online incursions.

The bill has been criticised by tech giants who argue it would give the government too much power to interfere with their complex global systems, and may lead to weaker security if Australia’s digital agencies decide to install incompatible or unhelpful software.

But it also includes several other features, including mandatory reporting of major cyber incidents and the power for the government to take over the management of severe attacks that can be used if the company under fire is not coping.

Christopher Krebs, a former director of the United States Department of Homeland Security’s cybersecurity agency, pointed to the example of the Colonial Pipeline hacking earlier this year as an illustration of the risk that cyber warfare poses.

Criminal, rather than state, hackers gained control of a huge trove of data from the company that supplies about half the fuel from Texas to the East Coast in May, prompting it to briefly shut down its distribution network and pay a $USD4.4 million ($6.5 million) ransom to end the attack. States could do a similar thing, said Mr Krebs, who was fired late last year by then-president Donald Trump via a tweet after saying the 2020 US election was not rigged.

“The concept here is you disrupt… systemically important critical infrastructure, and… it can be just like pulling the leg out underneath a stool that causes the whole system to collapse,” Mr Krebs said.

Australia has taken some major steps to reduce the likelihood that foreign states have access to local infrastructure, such as excluding the Chinese telecommunications giant Huawei from developing next-generation 5G mobile internet.

Prime Minister Scott Morrison discussed the rising number of cyber attacks, the pace of which appears to have tripled in recent months, with his British counterparts when he was in the United Kingdom in June.

China’s foreign ministry has repeatedly denied it is behind cyber attacks on Australian companies and governments, instead saying it was the victim of attacks from the United States.

“China always calls on countries to advance dialogue and cooperation and handle this challenge together on the basis of mutual respect, equality and mutual benefit,” said a spokesman, Wang Wenbin. “We also call on all sides to act responsibly in the cyber space.”