Queer Eye‘s eight episode seasons are so easy to blow through (just like the pack of tissues you’ll surely use up while watching), so you can hardly be blamed for already wanting to know if Queer Eye will return for Season 4. In just one year, the makeover (or make-better, as the Fab Five would say) show has taken the world by storm with its good-heartedness. And, it’s a great sign that the show’s popularity led to three seasons in 13 months, because it bodes well for more episodes to be on the way shortly.

Actually, there already are more confirmed episodes coming in the form of a special series. Queer Eye: We’re In Japan! is a four-episode mini-series that the Fab Five filmed abroad earlier this year. According to The Wrap, it’s due out sometime in 2019 and will feature four "make-betters" of locals in Japan. That’s its own special series, though, not the official Season 4. The show hasn’t been renewed yet, but it’s likely only a matter of time. There’s such an obsession with the series that it would be incredibly cruel not to bring it back for more ASAP.

Judging by the timeline of the first few seasons, we can determine some kind of pattern for when new episodes tend to hit the streaming site. There were four months between Seasons 1 and 2. The quick turnaround was likely because the cast had filmed 16 episodes in one go over the summer of 2017, but only released eight at a time. Season 3, which premieres nine months after Season 2, also filmed for an extended period of time, which hints that more episodes may be ready to go and lying in wait. According to The Hollywood Reporter, the crew filmed Season 3 for four months in the summer and fall of 2018. Since each episode is a real-world week, that’s 16 weeks — aka 16 episodes. That means Netflix probably has Season 4’s eight episodes ready to launch when the network sees fit. 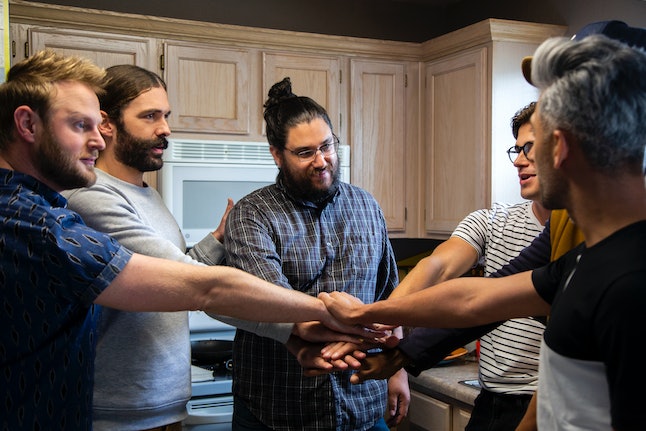 If Season 4 follows the Season 2 timeline, we could see more episodes in July. But, that may be when Netflix chooses to air the Japan series, pushing Season 4 to later in 2019 or early 2020. In any case, you can expect more Queer Eye in 2019 and beyond. Way, way beyond. Style expert Tan France told Bustle last year that he thinks the format of the show makes it perfect for a ton of seasons. "I think we could do another 50 of these and it wouldn’t make the format stale," he said. "[Audiences] have a connection with every one of [the heroes]."

Culture expert Karamo Brown also told Bustle last year that he’d come back for, like, Season 15 of the show if Netflix wanted him. "It’s the first show I’ve been on where I am actually in love with my cast mates. Like, we’re genuinely best friends," he said. "So, yes, to work with my friends and do something that’s impactful for the world? Sign me up for the rest of my life."

But before we get too ahead of ourselves, there’s still eight new Season 3 episodes to watch (and re-watch) and four episodes filmed in Japan to look forward to. As far as the future of Season 4 and beyond? It’s looking bright.