Few movie premises are more familiar than a family road trip – and though it may not be immediately clear where the nameless characters in Panah Panahi’s Hit the Road are headed, while we’re riding along with them, it’s easy to feel at home.

This family has enough quirks for a long-running sitcom, but they also seem like real people. Dad (Mohammad Hassan Madjooni) is a surly but harmless middle-aged bear with a broken leg, a bristling beard and a battered-looking nose like Walter Matthau’s. His wife (Pantea Panahiha) is grey-haired and seemingly demure, but doesn’t take long to reveal a playful side. 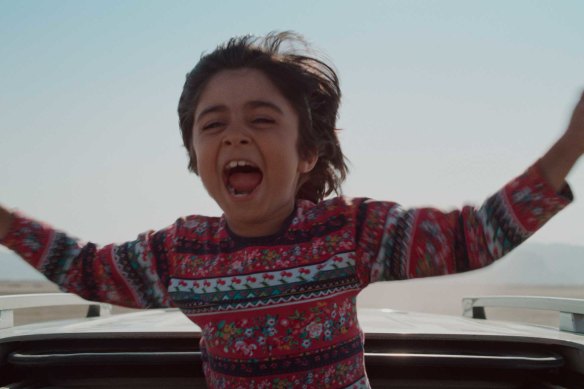 Rayan Sarlak delivers a scene-stealing performance in Hit the Road.

The scene-stealer is their excitable younger son (Rayan Sarlak) in the back seat, showing off and whinging in the manner of six-year-olds everywhere. At the wheel of the SUV, his adult brother (Amin Simiar) has much less to say, despite the journey apparently being made on his behalf (or perhaps for just that reason).

There’s also the panting family dog, seemingly the one member of the party with nothing to fret about. But this turns out to be deceptive. In the same way, the whole point of Hit the Road is that this is no ordinary outing, although those who know better strive to pretend otherwise.

This is Panahi’s first feature, but if you’re thinking you recognise his surname, you’re not wrong. He’s the son of the politically outspoken Iranian director Jafar Panahi (Tehran Taxi), who was banned from filmmaking in 2010, but has defiantly kept working and was back in the news last month when he was detained by authorities once more. 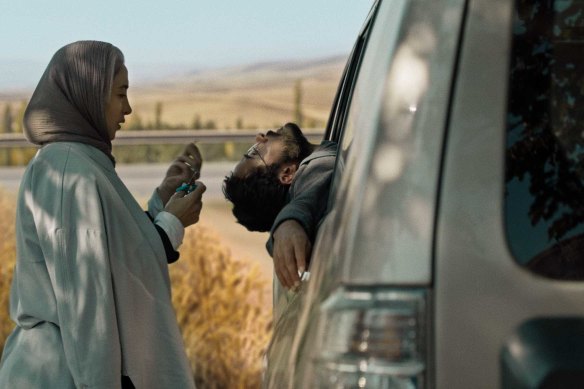 None of that is strictly what Hit the Road is about. But nor can it be put out of mind, especially as the younger Panahi is not the first in his family to set much of a film inside a moving vehicle – although his approach is less austerely conceptual than his father’s, permitting magic-realist flourishes and a soundtrack that ranges from 1970s Iranian pop songs to Schubert and Bach.

For that matter, there are times when the use of landscape harks back to the work of the elder Panahi’s mentor, the late master Abbas Kiarostami (Taste of Cherry), especially in a climactic extended long shot that turns the characters into stick figures on the distant horizon.

Where Kiarostami’s movies are open to many interpretations, in the end there’s not much mystery about what Hit the Road is driving at. For good or ill, it seems each new generation of Iranian filmmakers is obliged to acquire the art of leaving things out in a way that permits the viewer to fill in the blanks.

Hit the Road is in cinemas from August 25.