Melania Trump has been married to the American President, Donald Trump, since 2005 and according to body language expert, Judi James, they have come along way since going into the White House.  Tonight, the pair attended an exclusive bash at Buckingham Palace hosted by none other than Queen Elizabeth herself and the pair put on an affectionate display. But, body language expert Judi James points out that the dynamic between the pair has shifted.

Judi explained: “Melania arrived looking regal [to the NATO event], showing how her and her husband’s body language rituals together have changed since they first went into the White House and how much her status and confidence signals have grown.

“Tonight it was Melania getting out of the car first at the Palace, addressing the press before turning to look for her husband, who appeared to have got slightly lost behind her.”

According to Judi, Melania’s confidence has flourished since entering the White House and was seen tonight taking control of conversation around her and taking the lead on several encounters with other world leaders.

“Unlike the days when Melania would  trail in the President’s wake, tonight she was presented to the hosts by her husband and often instigated the handshakes,” explained Judi. 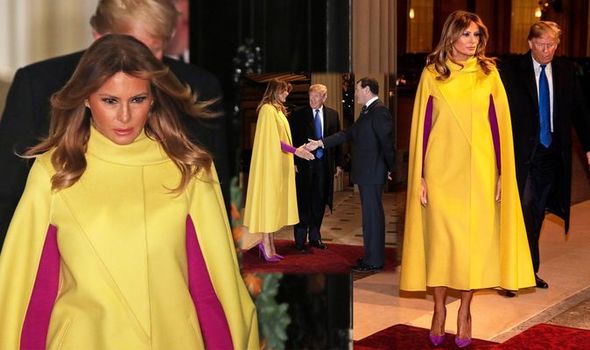 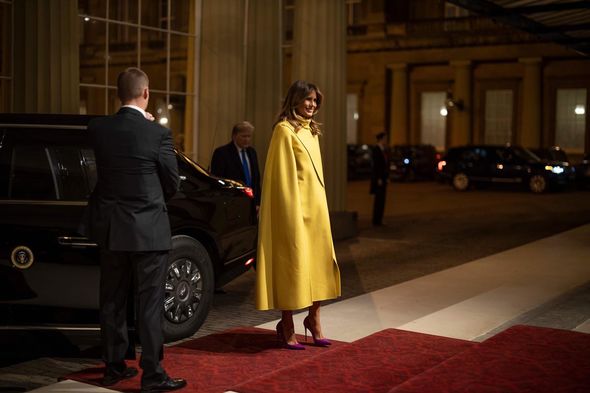 Far from being camera shy, the First Lady was seen leading her husband through the oncoming flashes of cameras and even at times turned back to show her appreciation to photographers before being guided inside the event.

Throughout the long walk to the palace the pair left holding hands showing a unified front.

Judi said: “She turned once more towards the cameras before Trump placed a hand on her back to gently guide her ahead of him as they walked inside the palace.

“The couple also walked along holding hands in what looked like a mutually affectionate ritual.”

Judi revealed: “Trump stands far more to attention with the Queen and his poses a look rather more formal and respectful, despite the closeness the two showed on his last visit.

“He even seems to stand back as they chat, with the Queen appearing to lean forward to hear his comments, suggesting a very rare moment of quiet delivery from the normally noisy President.

“[The Queen] looks genuinely fascinated by him and despite his more formal poses the reactions of people around him like Prince Charles and even Princess Anne (watching from the doorway) suggest he’s a genuinely hilariously funny guest.

“We can only see Trump from back view in the group but the reaction from the royals does seem to imply that they really do enjoy his company and hearing his comments.” 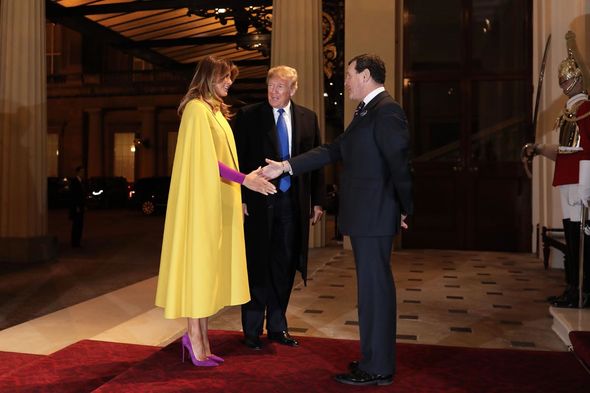 President Trump may be the joker of the party who has the royals giggling in the corners but it’s Canadian Prime Minister Justin Trudeau who Judi claims is the “charmer.”

“Trudeau is a consummate body language charmer, using mirroring signals to create empathy and rapport and adding in some attentive listening rituals to flatter at the same time,” explained Judi.

“With the Queen he performs a partial bow during their greeting ritual but, apparently unaware of the fingertips normally proffered by Her Majesty, he lightly clasps her hand in a ‘hand sandwich’ gesture, i.e. two-handed, with the spare hand on top during the shake. This tends to register a keenness to display close relationships but it is an unusual add-on to perform with the Queen.”

Ever the charmer, Trudeau’s extra long “hand-sandwich” shake doesn’t go unnoticed and the Queen looks openly “delighted” to have held his hand for longer.

Judi said: “[The Queen’s] pose suggests she’s delighted to have her hand held longer than usual and Trudeau more than makes up for the extra intimacy by cocking his head to one side in a gesture of polite humility and performing the most charming of smiles. This shake makes him look rather like a family member rather than a visiting world leader. 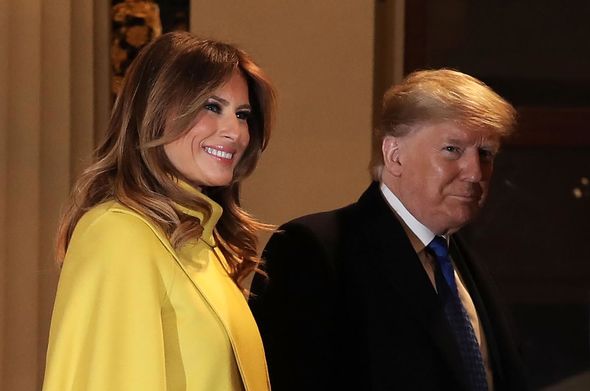 “Standing chatting with the Queen, Trudeau adopts a classic fig-leaf pose, looking down and with his head dipped humbly, looking almost like a small boy despite his height.”

Ahead of the NATO reception at Buckingham Palace, Melania and Donald Trump had tea with Prince Charles and Camilla, Duchess of Cornwall.

Melania and Donald were pictured greeting the royals warmly before entering inside the building and posing for an official photograph.

Melania was even pictured kissing the Duchess of Cornwall on both cheeks before going inside.

Judi said: “Both Trump and Melania greeted Charles and Camilla like old friends, with Camilla standing one step up for their greeting kiss in a bid to stand level with the First Lady, who responded warmly by holding Camilla by the arms as they kissed, in a gesture of fondness and friendship. “

Melania wore a striking canary-yellow Valentino cape and an eye-catching magenta ensemble with matching Christine Louboutin heels for the occasion.

Lea Michele: Look at My Baby Bump and Stop Holding Me Accountable!

FM Cavusoglu says Ankara will not be held hostage by Greece and Cyprus and called on EU to be an ‘honest broker’. Turkey will respond…