As a person in her late 30s, I like to think that I embrace my age. My face reflects my maturity, my story, my experience of the world. I don’t wish I was 20 again, and I don’t want to look like it either.

But, equally, I’d really like those fine lines on my forehead to do one, so I've done a Dermawand review to see if it can do the trick.

I don’t think my point of view is especially unusual. Whatever our age, we all want to look our fresh-faced best. Many of us (myself included) invest in the best eye creams and best moisturisers, which promise miracle results. I can tell you I’ve splurged on many, and none have quite reversed my creeping crow’s feet or deepening laugh lines.

I’ve never really considered Botox an option; the hundreds-of-quid per treatment price tag is enough to put me off, plus it feels a shade invasive for my taste. What I would like is a powerful but non-invasive way to soften those fine lines.

That’s why I thought I’d give the Dermawand a try. This radio frequency device, based on tech used by dermatologists and medispas, is a buy-once-have-forever gadget that promises to do the hard work for me, for a single investment of £89.

Could this be the holy grail? To find out, I tested the Dermawand according to its instructions for three straight weeks. Here’s what I found…

The Dermawand is an electric device that uses a stream of micro-current pulses to massage your skin. The makers say the radio frequency technology improves circulation, skin tone and texture, and that with continued use it decreases pore size and softens the appearance of fine lines and wrinkles.

Unlike something like Botox, it’s not a quick fix. You need to swipe the Dermawand’s illuminated ‘toning tip’ continuously over your face for a minimum of three minutes, twice a day — every single day — to see results. The more you use it, and the longer you use it for, the more results you should see.

It’s not a completely passive event. As you sweep, the Dermawand sends its pulses into your face, giving your skin a tingling feeling, almost like a bunch of very miniature electric shocks. If done correctly it isn’t painful, but I wouldn’t call it 100% pain-free either (especially if you don’t watch which setting you’re on — more on that later).

Rather elusively, the Dermawand doesn’t promise results within any specific time period. It does say that you can see effects in as little as a week and that ‘with continued use, you will be AMAZED!’.

Dermawand says that, in its clinical trials, 83.7% of users reported that their faces looked younger, while 95.3% reported an improvement in facial complexion.

After using it for a little under a month, I found that my skin looked brighter, fresher and healthier. As for my fine lines and wrinkles? I thought they had softened, but when I closely compared my own amateur ‘before and after’ photos, I honestly couldn’t find too much difference.

Is that because it isn’t as effective as the makers claim or that I just needed to use it longer? It’s hard to say. The Dermawand’s results vary from person to person, making generalisations almost impossible.

I have to admit that I wasn’t a huge fan of the Dermawand’s packaging. With infomercial-esque phrasing – ‘Millions sold worldwide!’ – and a dramatic before-and-after photo plastered on the box, it felt a bit hokey to me.

However, I was reassured that it was both safe to use and at least partially effective by the fact that it’s stocked at many trusted UK retailers, including Boots.

I was further reassured after reading up on how it works. The Dermawand sends low-level massage pulses into your skin, using similar technology that is found in doctors’ offices and medical spas. However, in the case of the Dermawand, this is done at a much lower frequency and amplitude, making it safe for daily home use.

The instructions were easy to follow, with handy images included. To get started, all I had to do was layer my clean, dry face with a good-quality moisturising cream, then start sweeping the toning bulb in circles and lines across my face and neck. I’d have to use it for a minimum of three minutes at a time, twice a day, moisturizing again at the end of each session.

The Dermawand is a plug-in device (though I would have loved for it to have been battery operated) and you’ll ideally want to use it in front of a mirror. With that in mind, make sure you’ve got a suitable spot in your house to use it before investing.

As instructed, I started my twice-a-day routine with the Dermawand set to the lowest setting (there are nine possible intensities). Over the coming days, I would work the intensity up gradually as my skin acclimatised. Start too high too soon, and you risk irritation (plus, in my experience, more intense ‘zaps’ from the device).

Each time I’d apply the wand to my face, I would feel an initial spark-like zap as the toning tip came into contact with my skin. This was the most uncomfortable part of the process; the moment where it felt a bit like a mini electric shock.

However, a split-second later, once the bulb was fully in contact with my face, the sensation shifted to just a gentle tingling. Weirdly, after a few days, I started finding this tingling strangely addictive. It made me feel like the wand was working!

While sweeping the toning tip over your face, you’ll find that the Dermawand also makes a gentle humming sound (a bit like a white noise machine or electric toothbrush) and that it emits a faint ozone aroma, like the smell of rain.

After a few days of doing my broad three-minute sweeps and working my way up to a ‘3’ on the intensity dial, I graduated to doing the targeted exercises outlined in the Dermawand booklet. The idea is that these will address common problem areas more closely.

The more exercises I did, the more lengthy each session became – as long as 15 minutes. And in turn, the more moisturiser I needed to apply.

It’s essential to have a well-moisturized face while using the Dermawand, as this prevents the pulse from feeling too intense and minimises skin irritation and redness. But as my moisturiser would soak in within a few minutes of using the device, I’d have to reapply once or twice.

This was a definite negative point for me. As I’ve already mentioned, I’ve invested in some pricey face creams. By using the Dermawand, I suddenly found myself going through it at three times the rate as usual. I’d have to find a cheaper moisturiser that was still effective in order to save my bank balance.

Finally, due to the continuous tingling and occasional zap, I felt a bit nervous about doing the exercises around my delicate eye area. I had trouble working out how close was too close, and in turn, I didn’t quite get into some of my most problematic spots (inner eyes and crow’s feet) as much as I would have liked. 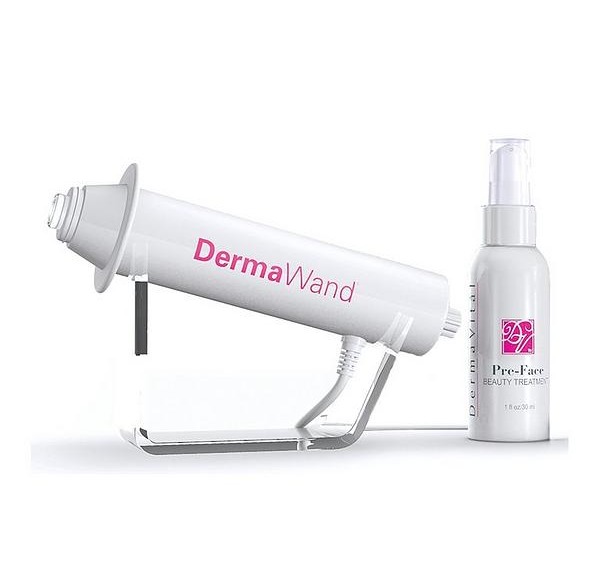 Is the Dermawand effective?

More about me: I am a woman in her late 30s with fine lines around my eyes, on my forehead and near my mouth, but with no deep wrinkles. Obviously, skin is a personal thing and so I can only speak about how the Dermawand affected me, which was generally positively.

Within a week of using it, I felt my skin already looked better. It was brighter, fresher and more even in tone and, though I might have been imagining it, a bit bouncier too. A friend of mine who didn’t know I was doing anything different in my routine even told me I looked rested.

As for the effect on my fine lines and wrinkles? The jury’s out. Anecdotally, I could have sworn they were getting less noticeable. But when looking over my before-and-after pics at the end of my weeks of use, I couldn’t find a difference. But then again, Dermawand does say to be patient. It might just be that I needed to use it longer.

My biggest personal issue with the Dermawand is the time commitment it requires. Even though I only used it for a few weeks, I found it hard to stick to the twice-a-day routine — especially the full exercise routine, which takes 15 minutes each time.

I think I would have been more motivated to keep it up if I was seeing fast, dramatic results, but as a busy, impatient person I started to get a bit bored once the initial results seemed to plateau.

Finally, it’s worth noting that the effects of the Dermawand are not permanent. How long they last is personal, but I found that around a week after stopping daily use my skin already looked a little less bright and fresh.

Where to buy the Dermawand

The Dermawand costs £89 from Boots – less than at many other retailers (some charge over £100). It is an investment, but if you used it even for just a month, that’s less than £1.50 per session. It’s about the same price as a facial at a very swanky spa.

After using the Dermawand for nearly a month, I could see a difference in my skin. It looked smoother and brighter, and my forehead and cheeks looked and felt a bit lifted.

However, how much of that was down to the device itself and how much was thanks to the fact that I was moisturising three times as much with my pricey face cream? I couldn’t exactly say.

On the whole, I do feel like the device has some kind of effect. It might not be a total miracle maker — at least not on my skin after just a month of use – but I’d be happy to continue using it to see what it can do in the long term.

Does that mean I’m going to religiously stick to the twice-a-day routine forever more?

Honestly, I don’t think I can. My schedule is just a bit too erratic, so it’s more realistic for me to aim to do it 50% of the time rather than 100%.

Then, when I have an important event coming up – say a wedding or a holiday – I’d ramp up use in the weeks before. Combined with the rest of my existing skincare regime, which includes quality moisturisers and regular exfoliation, I think it will make my late-30s skin look 10/10.