After years of being in a committed relationship, Demi Lovato isn’t dating anyone seriously, and she seems to like it that way. In March, the star opened up about her love life for an interview with InStyle. Lovato told the magazine that she is embracing being alone and has recently started to date casually.

She told the magazine,

The singer has since been linked romantically to several high-profile stars, but she doesn’t appear to be in a relationship. In 2016, she split from Wilmer Valderrama, her boyfriend of six years.

Since the split with Valderrama, Lovato doesn’t appear to be looking for a serious relationship. Instead, she seems to be enjoying a period of self-discovery while remaining open to dating. In the InStyle interview, she shared that when it comes to meeting people she’s usually the one to reach out to potential dates. "I’m normally the first one to make the move," she told the magazine, according to People. "I’m always the one who says, ‘Let me get your number.’ Or I slide into their DMs on Instagram."

Last year, Lovato also opened up about her fluid sexuality in her documentary Simply Complicated. "I am open to human connection, so whether that’s through a male or female, it doesn’t matter to me," she said in the doc. 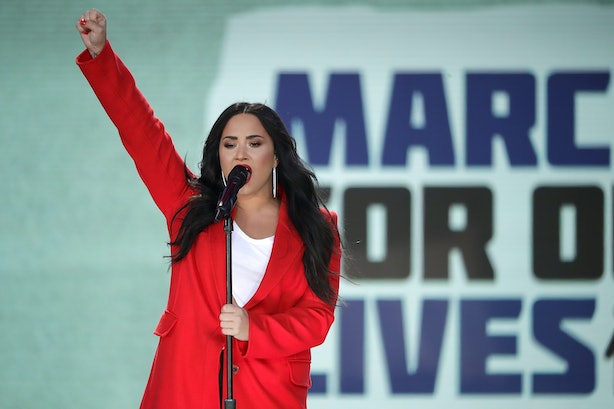 Lovato has reportedly dated some professional athletes since splitting up with Valderrama. In 2016, Lovato was linked to UFC fighter Luke Rockhold, but according to People, the two were not in a relationship. "They like each other, but they’re not exclusive," an anonymous source told the publication. "They’re both open to dating other people." The two reportedly made a mutual decision to part ways, and the singer started dating MMA fighter Guilherme “Bomba” Vasconcelos in 2017. The two had reportedly had a fling in the past, and reconnected just in time to make the relationship social media official on New Year’s Eve. Lovato and Vasconcelos split after six months, and the Sorry Not Sorry singer doesn’t seem to have settled down with anyone since.

Even though Lovato is single in 2018, there have been plenty of dating rumors this year. In February, there was speculation that she was dating actor Jesse Williams, who she co-starred with in her "Tell Me You Love Me" music video. The rumors were not true, however, and the star wasn’t linked to anyone else until she kissed fellow singer Kehlani on stage.

In April, the singer made out with Kehlani on stage, sparking romance rumors. Lovato opened up about the kiss on BBC Radio 1, and said it wasn’t planned.

While it’s clear these ladies appreciate each other, their comments pretty much dispelled relationship speculation, and Lovato hasn’t been connected to anyone since. On Sunday, Lovato will perform at the 2018 Billboard Music Awards alongside Christina Aguilera. She’s nominated in several categories, including "Social Artist", "Best Female Artist", and "Dance/Electronic Song". It’s not yet clear if Lovato will arrive at the event with a date, but given her recent dating history there’s a good chance she’s going to enjoy the evening solo.