David L. Lander, the comic actor who for seven seasons made entrance-laughter inevitable as Squiggy on the ABC series “Laverne & Shirley,” died on Friday at the Cedars Sinai Medical Center in Los Angeles. He was 73.

His death was confirmed in a statement from his family. No cause was specified, but Mr. Lander had lived with multiple sclerosis for more than 35 years.

He and his comedy partner, Michael McKean, joined “Laverne & Shirley,” a sitcom about boy-crazy brewery workers in 1950s Milwaukee, when it began in 1976.

The running gag was that just as the title characters (played by Penny Marshall and Cindy Williams) would begin to discuss something unpleasant — “smelly leftovers,” “raving sex fiends,” “something that cries, burps and wets its pants,” “pitiful souls roaming the earth” — Lenny (Mr. McKean) and Squiggy (Mr. Lander), their upstairs neighbors, appeared at their apartment door.

Squiggy (full name Andrew Squiggman) was easily identified by the greasy black curl in the middle of his forehead; his favorite garment, a black leather jacket; and his distinctive nasal voice. He always said hello first.

Lenny and Squiggy were not the brainchild of the show’s creators. Mr. Lander and Mr. McKean invented them in college (Squiggy was called Ant’ny then) and had been performing as the characters with the Credibility Gap, a comedy performance ensemble.

The characters sometimes broke away from their own series. Mr. Lander and Mr. McKean appeared on the fictional talk show “America 2-Night,” hosted by Martin Mull.

Portraying two imaginary actors who supposedly played Lenny and Squiggy (but looked and talked just like them), they made small talk and sang “Creature Without a Head.” The song was also on the album recorded by Lenny and the Squigtones, their imaginary musical group (which included Christopher Guest on guitar). Principal Squiggie (Mr. Lander) appeared in “Scary Movie” (2000), and Squiggy himself turned up on a 2002 episode of “The Simpsons.” 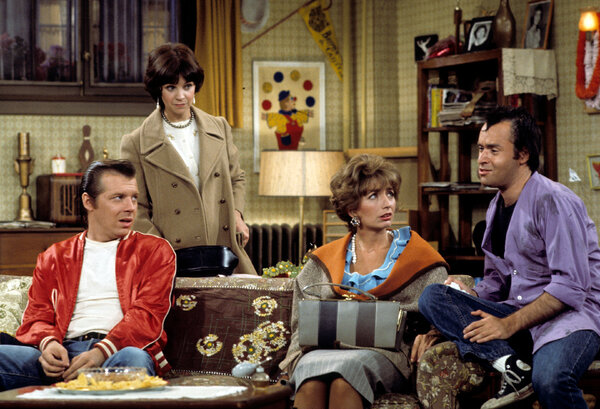 David Leonard Landau was born on June 22, 1947, in Brooklyn, to Saul Landau and Stella (Goodman) Landau, both high school teachers. David decided to become an actor, he said, when he was 10.

He studied at the High School of Performing Arts in Manhattan, where he changed his name — unofficially, at first — when a fellow student “borrowed” and registered it with the actors’ union, and at Carnegie Mellon University in Pittsburgh, where he met Mr. McKean.

In a way, Mr. Lander started in the big league. After doing three voice-acting television jobs, he had his first on-camera roles on “The Bob Newhart Show,” “Rhoda” and “Barney Miller,” all hit series of the mid-1970s.

His last on-screen role was in 2009 as a jury foreman in Steven Bochco’s legal series “Raising the Bar.” His final voice role was as Rumpelstiltskin in “Goldie and Bear” (2017), the Disney Junior animated series that stars his daughter, Natalie Lander, as the voice of Goldie.

In 1999 he publicly revealed his medical condition, then published a memoir, “Fall Down Laughing: How Squiggy Caught Multiple Sclerosis and Didn’t Tell Nobody,” and became a good-will ambassador for the National Multiple Sclerosis Society.

His first marriage (1969-76), to Thea Markus, ended in divorce. He and Kathy Fields, an actress turned film-set photographer (whose father was the producer and talent agent Freddie Fields), were married in 1979.

In addition to his wife and his daughter, he is survived by an older brother, Robert Landau.

In 2007, Mr. Lander told Brain & Life, a neurology magazine, he was determined to make the best of his diagnosis. “Wherever the chips may fall, if I fall with them, I will make it a point to do so gracefully — and laughing,” he said.