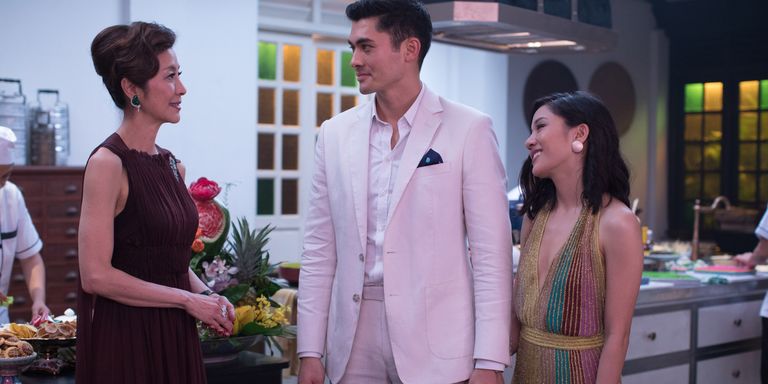 It’s finally here! After months of anticipation, the first full-length trailer for Crazy Rich Asians just premiered, and it’s everything we could’ve hoped for and more.

The film, based on the 2013 novel by Kevin Kwan, follows Rachel Chu (Constance Wu) as she travels with her devastatingly handsome boyfriend, Nick Young (Henry Golding), to meet his family in Singapore and attend the wedding of Nick’s best friend. But Rachel gets more than she bargains for when she learns Nick’s family is essentially Singaporean royalty—they’re incredibly wealthy, and Nick is like “the Asian bachelor,” as Rachel’s close friend Peik Lin (Awkwafina) puts it.

The trailer promises a lavish romp complete with first-class air travel, millions of dollars worth of jewels and to-die-for wardrobes. But the fun comes to a screeching halt when Rachel meets Nick’s elegant, severe mother Eleanor (Michelle Yeoh), who makes her disdain for Rachel clear from the start. At one point, she tells Rachel, “You will never be enough.” Later, Rachel confronts her in a tense moment: “If Nick chose me, he would lose his family. And if Nick chose his family, he might spend the rest of his life resenting you.” Brutal. The film also stars Gemma Chan, Ken Jeong, Jimmy O. Yang and Sonoya Mizuno.

The trailer demands several re-watches to take in all the exquisite detailing (That wedding dress! That aisle!), but you have plenty time to get acquainted with it—the film doesn’t hit theaters until August. We may be several months out, but Crazy Rich Asians already promises to be the rom-com of the year.