CRAIG BROWN: Why this club abhors the cappuccino! Six things you didn’t know about the Garrick

1) The entrepreneur Emily Bendell, founder of the lingerie firm Bluebella, has launched a legal challenge to London’s Garrick Club over its refusal to admit women as members.

In turn, a group of Garrick Club members has threatened a legal challenge to Bluebella over its continued refusal to stock frilly pink knickers and stockings suitable for the fuller-figured male.

The latter figure is ascribed to the disproportionate number of members who ‘transitioned’ at the age of 55. Subsection 32 (b) of the club rules clearly states that any member who changes gender after the age of 55 will be entitled to remain a member. 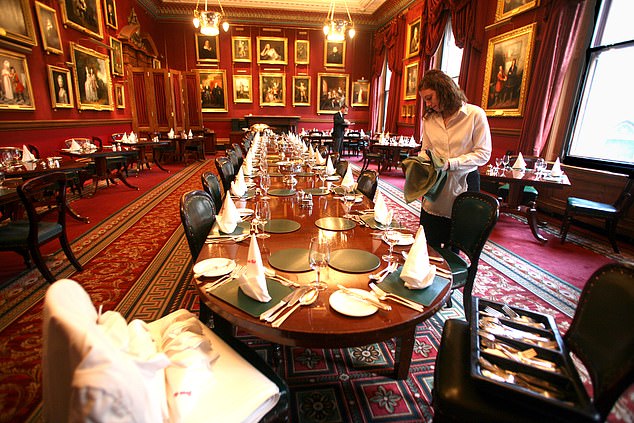 This rule was adopted when the distinguished thespian Cyril Twankey transitioned following the untimely death of his wife in 1890. Though some members pointed out at the time that her transition was not wholly convincing — her spotty dresses were too flamboyant, her 3ft high wigs improbable, her baking skills rudimentary — Widow Twankey became a fixture on the pantomime circuit for the next 20 years. She also rose to the position of Treasurer of the Entertainments Committee.

To the very end, Twankey remained proud of her Garrick membership, and would often sport a discreet pair of Garrick Club bow-ties as statement earrings whenever she took to the stage.

The entrepreneur Emily Bendell, founder of the lingerie firm Bluebella, has launched a legal challenge to London’s Garrick Club over its refusal to admit women as members

3) Every Thursday evening The Kerr-Mudgeon Room, named after The Rt Hon Sir Roderick Kerr-Mudgeon, QC, hosts a topical debate on behalf of the Dyspepsia Society. This year’s debating motions have included, ‘This House Is Appalled to Hear That Women Are Being Encouraged to Read the News on the BBC’, ‘This House Abhors the Cappuccino’, ‘This House Would Ban the Wearing of Bicycle Clips in the Upper Morning Room’, and, most recently, ‘This House Despairs’.

4) A recent survey of the Garrick Club Dining Room found that, on any given day, up to 7 per cent of diners are deceased. ‘Believe me, if one is in full-flow with an amusing anecdote, it can take quite a while to twig that your luncheon companion has died,’ explains one of the club’s leading raconteurs, Lord Fellowes of Downton.

‘Only the other day, I was barely halfway through telling my companion of the amusing occasion upon which my pantaloons got caught on a door-handle on the set of She Stoops To Conquer at the Vaudeville in 1979 — or was it 1978? — when a doctor arrived with the club thermometer and pronounced him dead.

‘So I did what anyone in my position would have done — I hurried through the rest of my anecdote, omitting some of the humorous detail. I then summoned the head waiter, and asked him to kindly remove the corpse in time for the arrival of my Welsh Rarebit.’

5) Founded in 1831, The Garrick Club was originally created with the aim of allowing ‘Members to talk about Themselves and their Achievements at Inordinate length, Without Fear of Interruption’. This noble intention continues to this day: Club Rule 18(b) states that ‘once a Member has embarked upon an anecdote, no other Member may speak until it has been completed.

‘The traditional signal for completion is the phrase ‘and the whole room literally fell about with laughter’. At this point, the floor is given to another member to tell his own self-serving anecdote. If no Member is available or willing to listen to it, members of staff may be summoned in exchange for a modest contribution to the Christmas fund.’

6) Women are permitted into the upstairs bar of the Garrick Club between 5pm and 7pm, but only on condition they talk about the quickest route from A to B, allowing for roadworks and traffic build-ups. For the past 150 years Garrick Club regulars talked of nothing else between these times.

In 1971, an up-and-coming young publisher was obliged to hand in his resignation after he was overheard predicting light showers. Feeling that this was too racy, the Chairman was obliged to remind members that the weather is an acceptable topic of conversation only after 7pm.