Jenny Mikakos was the fourth minister to leave the Andrews government cabinet in four months when she resigned on Saturday morning. Under normal circumstances this attrition rate would have led to rampant leadership speculation. 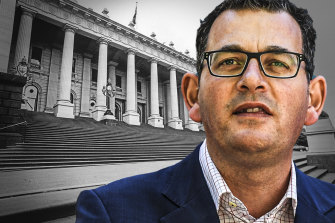 Premier Daniel Andrews is no ordinary leader, who finds himself in extraordinary circumstances. Credit:Jamie Brown

The Age has spoken to a dozen of Andrews’ caucus members from across the factional divide, both inside and outside Parliament. None were prepared to go on record because they were discussing internal party matters, but each was adamant that nobody was calling for the ALP leader’s job.

“I spent 14 hours on the phone on Saturday, and not once did anyone cast aspersions on the Premier’s leadership,” said one MP and factional ally of Andrews from the Left.

“Certainly there was much sadness about losing a colleague in Jenny and an eagerness to let the process of the Coate inquiry run its course. I did not detect any appetite for leadership change, although I could name pretty clearly a small handful in caucus who might have an interest in changing the leader for their own reasons.”

But the Premier has not emerged unscathed. With each ministerial sacking or resignation, Andrews has accrued more enemies and lost a little more internal support.

Now, many in the party room say that if the once omnipotent Andrews tried to dictate who replaced him on his departure, he would be given short shrift.

Broadly, Andrews’ support comes from his own Left faction and his detractors are in the Right, but in extraordinary times this divide is not as clear as it might seem. 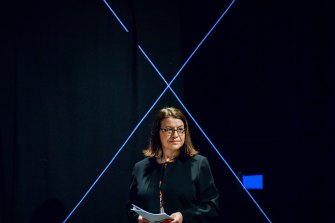 With each ministerial scalp, Jenny Mikakos being the latest, the Premier has accrued more enemies and burnt longer bridges. Credit:Joe Armao

But his list of enemies inside and outside the party continues to grow.

His appearance at the hotel quarantine inquiry, when he laid accountability for the bungled program at the feet of his then health minister Jenny Mikakos, angered many of his colleagues.

“There’s a few more people in the disgruntled camp today than there was 12 months ago,” a Right MP said. “It’s got a bit more volume, but nowhere near critical mass.”

Another source from the party’s Right said Andrews’ thinning support base did not mean anything in the short term, but it could potentially have longer term ramifications.

“For instance, if he was challenged for the leadership … he’s less likely to know what’s going on on the ground,” the Right source says.

But there isn't a rival sizing him up yet. The Right makes up more than half the party room, but in the wake of the Adem Somyurek branch-stacking scandal, they are so fractured, their sources admit there is little point counting numbers or swinging behind any alternative leader.

“The reality is, all of this stuff is quite boring,” a Left MP said. “If your job is to cause trouble, you can put out there that there are issues. When you scratch beneath their bold statements though, there’s nothing there.

“Talk to them and it broadly goes like this: Do you think Dan’s broadly done a good job? Yeah. Do you seriously think his leadership is at risk? No. If not Dan, then who are you proposing? We don’t know. Talk about emperor has no clothes.” 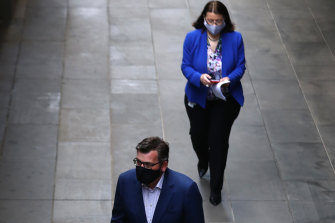 Andrews has battled major fronts over the past six years but the biggest one, with the deadliest spot fires, has been the bungling of the hotel quarantine program that the Board of Inquiry heard led to 768 deaths, infected 18,000 people and severely affected the Victorian economy.

“Daniel’s authority has been chipped away at because of COVID, and how he handled some of the events, in particular his testimony about Jenny Mikakos,” a Right MP says.

“He’s making all these calls, and [then] pushing someone else under the bus. If Daniel wants to be in total control and make all the calls, he needs to take responsibility. He pushed her under the bus, and was not prepared to take accountability.”

A Left MP urged their colleagues to ride out the storm and focus on the task ahead.

“We now have a set of consequences confronting us profoundly and we need to hold our nerve, show courage under fire as opposed to wetting the bed whenever it gets hard,” the MP said.