The ABC will rebrand its lifestyle website just two years after it was established amid criticism from within the broadcaster and commercial competitors who claimed it was an unjustifiable use of taxpayer money.

ABC Life staff were told on Monday morning that the website, which was established in 2018, will from Wednesday be called ABC Everyday. The shift comes after some ABC staff and media outlets attacked ABC Life for producing digital lifestyle content at a time when commercial rivals and the public broadcaster were under pressure to find cost savings. 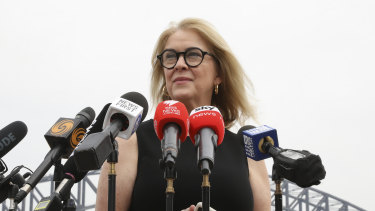 ABC regional and local director Judith Whelan during a press conference at the Opera House on New Years Day.Credit:Ben Rushton

ABC Everyday will have a reworked logo and its editorial scope will be expanded, with reporters from the ABC's rural and regional bureaus encouraged to file more stories. The changes also come after ABC news boss Gaven Morris told staff he would be happier if the public broadcaster “spent less time on the concerns of the inner-city elites and more time on the things that matter to central Queensland”.

While many have praised ABC Life for putting a spotlight on race and relationships, others have questioned the value of some of its lighter content which includes articles such as "Do you need to wear sunscreen even when inside?" and "If a zombie apocalypse came, this is how much weight you'd lose".

The website was founded to help the ABC reach younger, digital-first audiences. In March, the website had an average audience of more than 1.4 million people, according to Nielsen data.

Judith Whelan, the director of the ABC's regional and local division, said the rebrand was not a conession to ABC Life's critics.

"We have not killed Life," she said. "The same content will be there. Its archive will be there. This brings it to a permanent home. It's very closely aligned with my strategy for regional and local – which is we are every day for everyone, we connect communities through the content we create and we strengthen and celebrate those communities."

At the time of its launch, ABC Life copped criticism from commercial free-to-air broadcasters who claimed the ABC was spending taxpayer dollars on duplicating content that already exists.

"This would have to be one of the most comprehensively covered market segments in Australian media," Free TV Australia's chief executive Bridget Fair said. (Nine, the owner of this masthead, is a member of Free TV Australia.)

But Ms Whelan said it shouldn't be controversial for the ABC to deliver lifestyle content because it has always done so.

"If you look at our local radio programs around the country and also in our regional centres, they're doing exactly that; explaining issues of everyday life," she said. "The ABC is not just news. Of course we're very proud of our investigative journalism … but we also do features all the time."

In June, the ABC unveiled its five-year strategic plan in response to a funding freeze imposed by the Morrison government. ABC Life lost about a third of its staff due to the changes and was to be called ABC Local. However that name has since been abandoned.

Ms Whelan said the recent ABC Life job cuts targeted "duplication" as the website had its own production staff. It now shares a social media team, subeditors and video producers with the ABC's broader regional and local division, which includes the broadcaster's metropolitan radio stations and regional radio and news bureaus.

"Sites evolve all the time," Ms Whelan said. "All the content you're familiar with will still be found on ABC Everyday. There'll just be a lot more as we draw on our regional bureaus and capital city audio teams. It's about it growing and becoming bigger, broader and more relevant to more people."