Community organisations and unions warn up to 12,000 jobs in places such as women's refuges and homeless shelters could be lost if federal government funding to close the pay gap in the sector isn't renewed in the October budget.

The national pay tribunal in 2012 awarded the community sector's mostly female workforce wage rises of 19 to 41 per cent, phased in over eight years, in recognition that their work had been undervalued because of their gender. 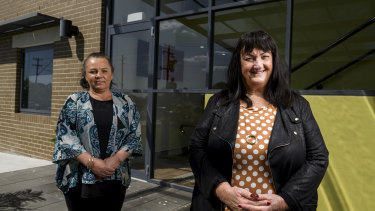 The final stage of the increase, most of which is covered by state and federal governments that fund many of the programs in the sector, comes into effect in December.

But a dedicated pot of money for community organisations dependent on federal support – the SACS Special Account – will run dry next year unless it is renewed at a cost of about $576 million annually.

Research by the left wing Australia Institute think tank forecasts this could result in 12,000 job losses or effective pay cuts per worker of up to $15,000 a year.

"It will definitely set the progress that has been made in this sector on closing the gender pay gap back [if the funding is not renewed] and that will have a flow-on effect to gender pay equality in Australia," Ms Lang said.

Economist Jim Stanford, author of the research paper, estimates about 57,400 workers are dependent on the federal funding.

Pay levels are set in the award so they cannot be changed directly but Dr Stanford argues employers could put staff on lower duties, use more contractors and cut back on allowances if the federal government funding isn't continued.

Social Services Minister Anne Ruston said she was in discussions with the sector about what to do with the special funding from next year.

'It will definitely set the progress that has been made in this sector on closing the gender pay gap back [if the funding is not renewed].'

"I have made a commitment to work with the sector on how to … best ensure the long-term sustainability of our social services system in a way that delivers real and long-lasting benefits for those who need its support," Senator Ruston said.

"As the government has demonstrated through our response to COVID-19, we are absolutely committed to supporting jobs and keeping people connected to the workforce and decisions we make will be informed by those priorities."

Narelle Clay, chief executive of Southern Youth and Family Services, which operates in the bushfire-ravaged southern region of NSW, said her staff were struggling with uncertainty.

"That's doing terrible things to their mental health, to their morale and to agencies' planning going forward if you're afraid you'll have a terrible cut to your budget," Ms Clay said, who is also an ASU official.

She believes about a third of the staff on the Commonwealth-funded programs her organisation delivers, which include help to people battling homelessness and working through family breakdowns, will be at risk if the funding disappears.

Most social organisations are dependent on government funding and state governments have largely agreed to continue funding their share of the wage increases.

The peak industry body, the Australian Council of Social Service, said the pandemic had increased demand for community support, which made it a bad time for uncertainty over funding.