Throughout Westworld‘s first season, the park’s whereabouts were never explicitly stated, but fans haven’t been able to resist forming theories. Luckily, the HBO show’s Season 2 premiere, "Journey Into Night," clarifies several of them — perhaps even eliminating others. With several references to "the mainland" and Easter eggs in the dialogue, audiences are one step closer to discovering where the parks in Westworld are located.

As a refresher, when Westworld guests first enter the park (and leave the park again, as Maeve nearly does in the Season 1 finale), they arrive on a sleek, futuristic train. After being greeted by a host and escorted up the escalators, they change into more park-appropriate clothing. They then board a second, more "Wild West"-themed train, before entering Westworld proper.

So where is that first train arriving from? For one thing, the Season 2 premiere reveals a new character named Karl Strand (Gustaf Skarsgård), who is arguing with someone in military uniform. If you turn on the subtitles, it confirms that the officer is speaking Chinese. "See this?" Strand asks him. "It’s an official statement executed by your country giving Delos and consequently me authority over this entire island." He continues, telling what appears to be his translator, "Have them sign an NDA, and then please escort them off my f*cking island."

This is hugely significant. The first clue is, of course, that the man speaks Mandarin, and that Strand refers to their location as "your country." Does that mean Westworld in China? Next is the bombshell that the characters have been on an island this entire time. Do I smell a Lost reference? Is Delos just a stand-in for the Dharma Initiative? After all, J.J. Abrams is an executive producer on Westworld. Not to mention that the tiger on the beach seems incredibly similar to that polar bear in the Lost pilot.

In any case,Vanity Fair‘s Joanna Robinson took it one step further when she examined a theory posted on Reddit by user Kurmottaja. This user mentions that the Finnish subtitles for Westworld’s Season 1 finale overlay specific coordinates over Maeve’s slip of paper, which tells the location of her daughter (Park 1, Sector 15, Zone 3). When plugged in, these numbers point to the Spratly Islands in the South China Sea. In the same thread, a user named jacurtis points out that, when Maeve is riding the escalators down to the train in the Season 1 finale, "you hear the PA play a voice recording…. in English and then Chinese." 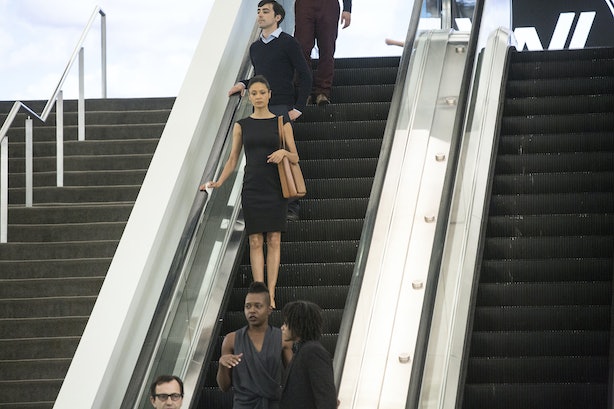 Showrunners Jonathan Nolan and Lisa Joy have been coy about the park’s whereabouts. However, in a 2016 interview with Entertainment Weekly, they hinted that, wherever the park was, it was difficult for people to communicate with anyone outside the park. "…the park is very, very vast, and you don’t rotate home often," Joy said. "You don’t have open communication where you can just pick up a phone."

Those comments are in line with the idea that Westworld is located on a remote island. However, there have also been other location theories, including that Westworld is underwater (per the blog Beyond Westworld) or even in outer space (according to Reddit user TheRealZam). So, while all of these clues may simply be a misdirect, they’re certainly something to keep in mind. The answers are all there, apparently. Nolan told EW, "By the end of the first season, if you’re paying close attention, you will know where it is."

Perhaps viewers will learn more about Westworld’s location as Maeve escapes to Shogun World later in the season. And maybe they’ll even find out how that tiger got on the beach.