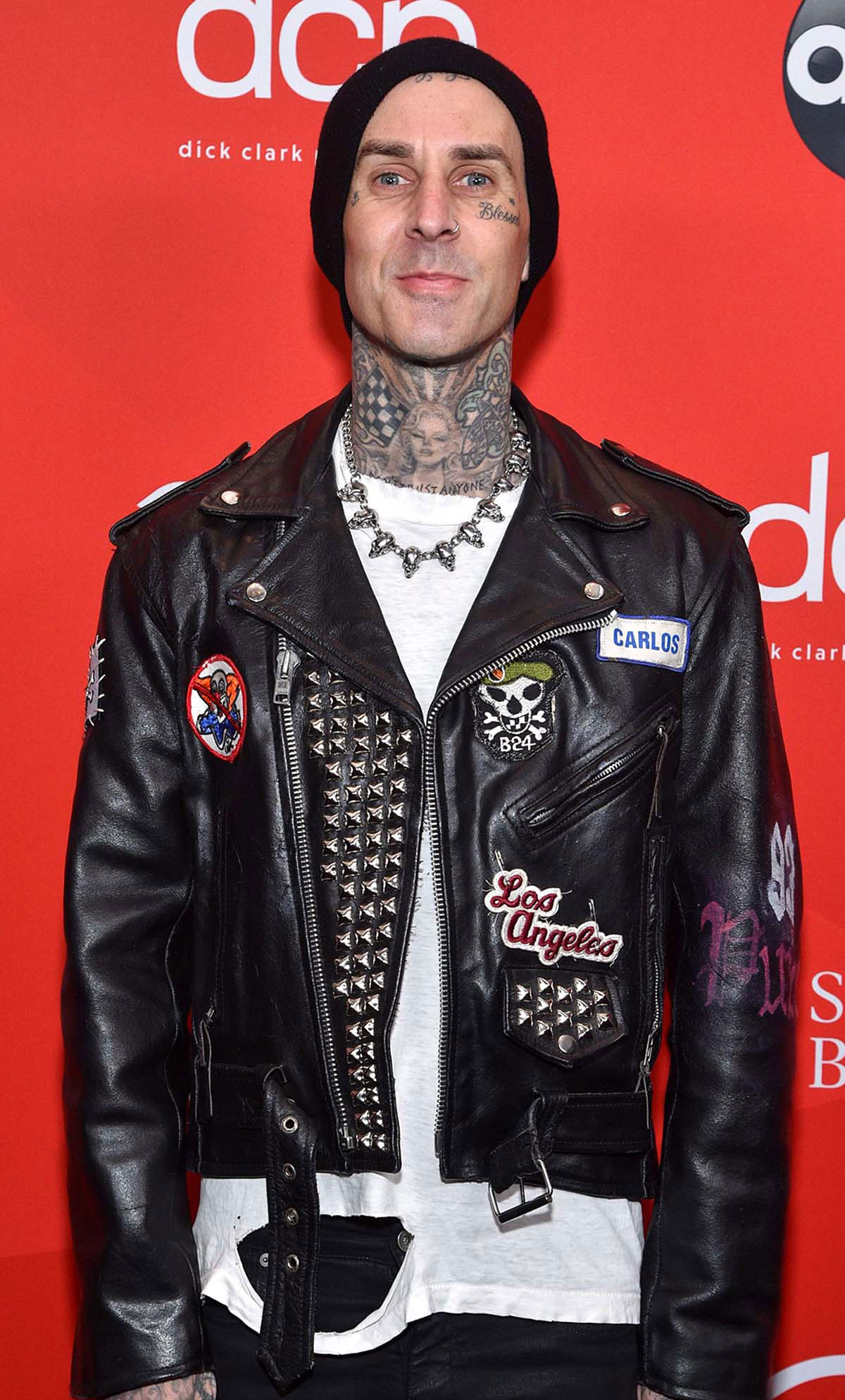 Keeping it real. Travis Barker fired back at a troll who criticized his choice to tattoo his whole body.

“The tattoos really look ridiculous, Travis,” the user commented on Barker’s Instagram post published on Friday, December 3. “When you get older, you are going to regret it.”

The Blink-182 drummer, 46, who shared both a black-and-white and colored photo of his inked torso, neck and scalp, was quick to clap back at the remark.

“When I’m older I’m probably gonna hang out with other badass tattooed dudes and generally look awesome,” Barker replied. “What are you gonna do when you just look like every other old person?”

Stars Who Got Tattoos for Love

The musician also received many positive comments about his expansive ink collection, with one writing, “Every tattoo is a time stamp, love it.”

Barker, who proposed to Kourtney Kardashian in October, has tattoos covering approximately 70 percent of his body. Some of the artwork highlights his loved ones, including 15-year-old daughter Alabama, who has a sketch of her face prominently placed on Barker’s back next to a drawing of Jesus. 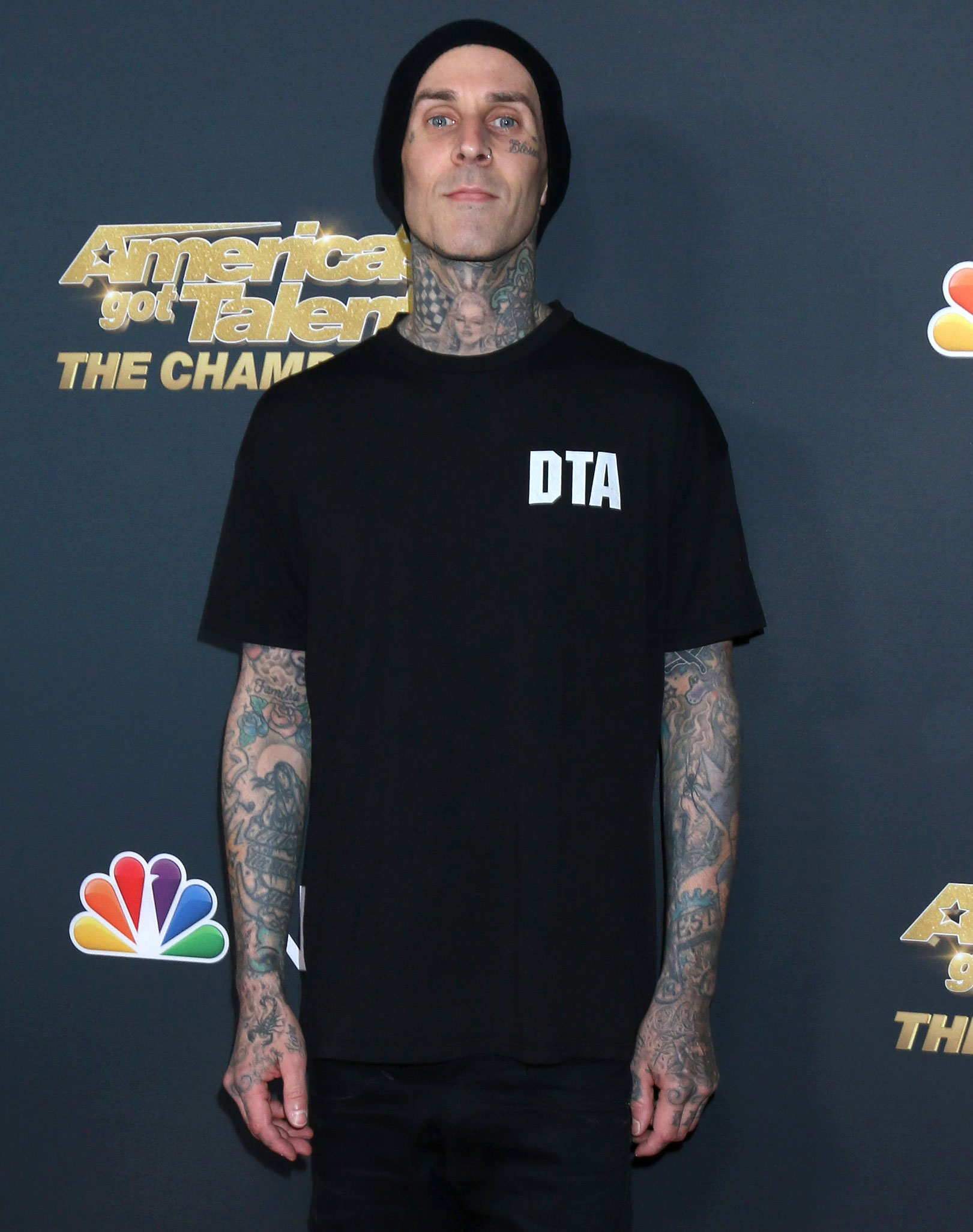 Alabama’s name is also written in elaborate script on one of the “I Think I’m OKAY” musician’s wrists. His 18-year-old son Landon’s name is featured on his other wrist.

Us Weekly confirmed in January that Barker and Kardashian, 42, had been dating “for a couple of months” after years of friendship. Three months later, the rocker debuted his “Kourtney” ink above his left nipple.

The Poosh founder revealed her own tattooing skills in May while adding a cursive “I love you” design on her beau’s lower right arm.

“Best tattoo ever,” Barker wrote via his Instagram Stories at the time. He then gushed over his love in her Instagram comments, writing, “Woman of many talents🖤 .”

Later that month, Barker appeared to subtly shade his ex-wife Shanna Moakler by adding the phrase “DON’T TRUST ANYONE” across the center of his chest. The new ink was placed partially over a tattoo of Marilyn Monroe and came amid drama with his ex.

Moakler, 46, with whom Barker shares Landon and Alabama, exclusively told Us in May that she allegedly “caught” her ex-husband having an “affair” with Kourtney’s sister Kim Kardashian while she was still married to Barker.

“I divorced my ex because, I saw them — I caught them having an affair,” Moakler told Us at the time. The KKW Beauty founder, 41, first met Barker in the early 2000s when she was Paris Hilton’s assistant.

Barker, for his part, previously denied having a sexual relationship with Kim, writing in his 2015 book, Can I Say: Living Large, Cheating Death, and Drums, Drums, Drums, that he “never touched” the reality star.

The “All the Small Things” artist’s relationship with Kourtney has since continued to blossom, with the couple getting engaged on October 16 while on vacation in Santa Barbara, California.

A source exclusively told Us at the time that the Keeping Up With the Kardashians alum, who shares Mason, 11, Penelope, 8, and Reign, 6, with ex-boyfriend Scott Disick, has already thought about having another child with her fiancé.

“They will have a baby together without any doubt, it’s just a matter of when and how,” the insider said in October. “Certainly though, she and Travis want to bring their own child into the picture, and if she can’t conceive, they’ll look at other alternatives.”