Unless Liberals heed the lessons from the complete repudiation on Saturday of Scott Morrison’s style of leadership and governing, then they are destined to spend a long time in opposition.

It certainly doesn’t mean lurching to the right. Nor does it mean unthinkingly veering left to Labor’s agenda, although to remain relevant they will have to support chunks of it, including on climate change, childcare, the Indigenous Voice to parliament and an integrity commission. 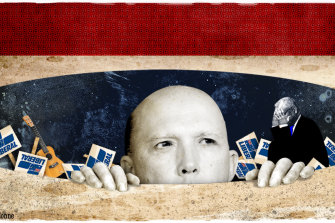 Heeding the lessons of their loss doesn’t mean the Liberals should lurch to the right, nor veer to the left.Credit:Dionne Gain

Instead of drifting aimlessly on policies, neither left, right nor centre, as they have been for the past few years under Morrison, searching for culture wars to wage or picking fights over issues which should have been settled long ago, they need to be in the sensible centre to survive with their horizons focused beyond the “Sky After Dark” mob.

They have to stand for something more enduring than whatever spin, stunt or sneaky manoeuvre will get them through the daily news cycle. They either change or they die.

The Liberals can do it more easily without Morrison on the backbench. The sooner he leaves the better. Once a good woman is found to run for his seat – no, not Katherine Deves – he should leave so the party can begin the painful reconstruction without his spectre hanging over them.

The same goes for the Nationals. If they think the result validated what they stood for under Barnaby Joyce, then they too will have years to explore the wilderness. Joyce’s leadership appears doomed again thanks to the lethal exploitation of his presence by the teals which obliterated the Liberal heartland, helping consign the Coalition to opposition. 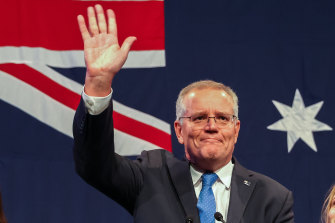 Scott Morrison concedes defeat on Saturday night. He needs to leave the parliament as soon as possible so the party can get on with its reconstruction.Credit:Getty Images

Joyce could face a challenge to his divisive leadership next week. Former leader Michael McCormack, current deputy David Littleproud, and former cabinet minister Darren Chester, are all considering running. Any one of them would do better.

Voters in their millions sent the clearest of messages. They were as fed up with Morrison as they were with politics as usual.

So far, Anthony Albanese has shown he gets it – he’s aware one of his principal tasks is to restore trust in government. It is early days with monumental challenges on the economy and national security. He has made an admirable beginning. Nobody will ever accuse him of being a smooth talker, but he comes across as an authentic, decent human being with good intentions who performed an extraordinary feat.

As he flew back from the Quad meeting in Tokyo, where he acquitted himself well, his economic team of Jim Chalmers and Katy Gallagher swung attention back to the economy. He has a good team. He needs to trust them to do their jobs because their successes will reflect well on all of them.

Peter Dutton might seem an unlikely choice as leader, but he is well liked by his colleagues, more engaging in private than in public, and the only one with any hope of keeping Liberals united while moving them back towards the middle because he knows that is where they need to be.

Albanese provides a template. In the space of three years an imperfect warrior of the socialist left dragged himself and his party to the centre and became prime minister.

Dutton spent the week calling colleagues to discuss next steps and also to commiserate with those who lost their seats including his former leadership rival Josh Frydenberg. He is a conservative who is not hardline on social issues. He has never been known to discriminate against people because of their sexuality. When he says he wants the party to resume its status as a broad church he is not talking about religion.

On climate change, which he long ago urged moderates to pursue, he is pragmatic. Because of his experience as a cop, he knows there is more to resolving Indigenous issues than endorsing the Uluru Statement from the Heart. He understands the need for a properly constituted anti-corruption body with protections to guard against “trial by media”. He is fully aware of how difficult it will be to get the Coalition to move.

Dutton’s deputy seems certain to be Sussan Ley however he needs to give Bridget Archer – and Andrew Bragg – prominent roles.

Archer had the courage to stand up for her beliefs when it mattered, not just at the end when disaster beckoned. She would be a living, breathing message to voters that there is a place in the upper ranks of the party for strong articulate women not afraid to rip up the talking points.

Morrison’s lack of empathy and shocking judgment, particularly on issues women cared deeply about, has cost the Liberals dearly.

Senior Coalition figures reckon they stopped listening to him when he failed to understand the gravity of allegations by Brittany Higgins that she had been raped inside a ministerial office. Everything he said or did after that made it worse, including in his final weeks when he chose Deves to run for Warringah because he wanted a fight on transgender women playing team sport. As if this was the issue that kept women awake at night.

You could hear the nails being hammered into the coffins of Liberal MPs from coast to coast, north to south. Bragg, a leading moderate, says the strategy was wrong ethically and politically, and the party needs to advocate modern economic and social liberalism to win back liberals.

Victorian Liberals former deputy state director Tony Barry predicted during the campaign that Morrison’s strategy of sacrificing the Liberal heartland, including his deputy Frydenberg, to court the religious right would either mark him as a genius or political roadkill.

“In the end he wasn’t just political roadkill, they reversed back over the body and drove over it again,” Barry told me.

There are many reasons why Morrison lost, why the women rebelled and why Albanese defied history and the doubters to prevail, all of which I hope to explore further in a book to be published by Scribe. Unfortunately, that means this will be my last column for a while, but I will be back writing for The Age and The Sydney Morning Herald. Thank you for your feedback, good and bad.