The good, the bad, and the VERY revealing: Celebrities who shunned ‘scary’ Halloween costumes to don daring outfits that left little to the imagination

As yet another Halloween approaches, revelers all over will be putting the finishing touches on their costumes as they prepare to transform into scary characters.

A-list celebrities are no exception, taking their fancy dress outfits as seriously as everyone else – and some can make very daring outfit choices indeed.

Celebrities are known for shunning the typically ‘scary’ status quo which dictates the theme Halloween costumes should follow, as they instead opt for revealing skirts, cut-out dresses and sometimes, hardly any clothing at all.

From singer Halsey’s barely-there interpretation of Batman villain Poison Ivy to Heidi Klum’s unrecognisable guise as Jessica Rabbit, FEMAIL looks back on some of the most outlandish Halloween outfits our favourite celebrities have dared to sport over the years…

As Halloween approaches, A-listers will no doubt be putting the finishing touches on their outlandish costumes, which can be VERY revealing. Singer Halsey shunned a full outfit for a glittered leaf bikini, leaving little to the imagination as she dressed up as Poison Ivy, the villain from Batman and Robin in 2018 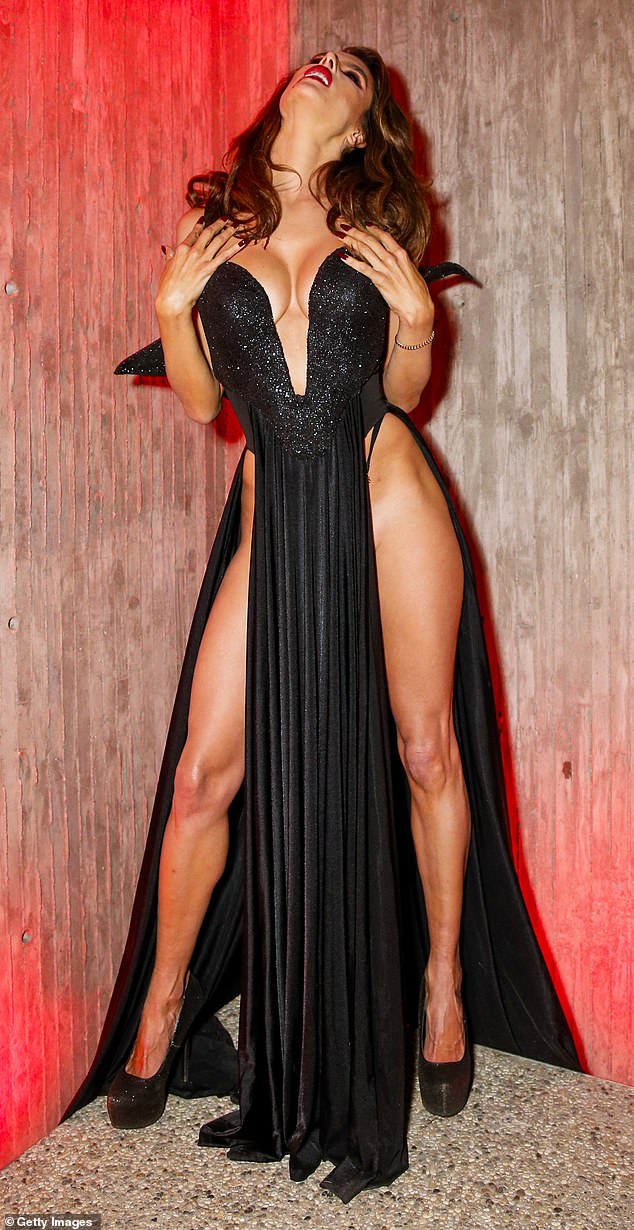 No one does Halloween better than Heidi Klum, who has become known for her parties around this time of year. Dedicated as ever to her costume, Heidi transformed herself in 2015 with a red wig, outlandish make-up and fake breasts to become Jessica Rabbit

During the height of her fame, former It Girl Paris Hilton dressed as a Playboy bunny to attend Haylie Duff’s Halloween party in Los Angeles in 2005, stepping out in white lace lingerie, a pink puffy ‘tail’ and bunny ears to create her look

Halloween queen! Mariah Carey, also known for throwing lavish parties, hosted guests at her house in LA in 2016 as the ‘devil’ for which she wore a PVC dress complete with enormous black platform shoes, a corset, wings and little horns 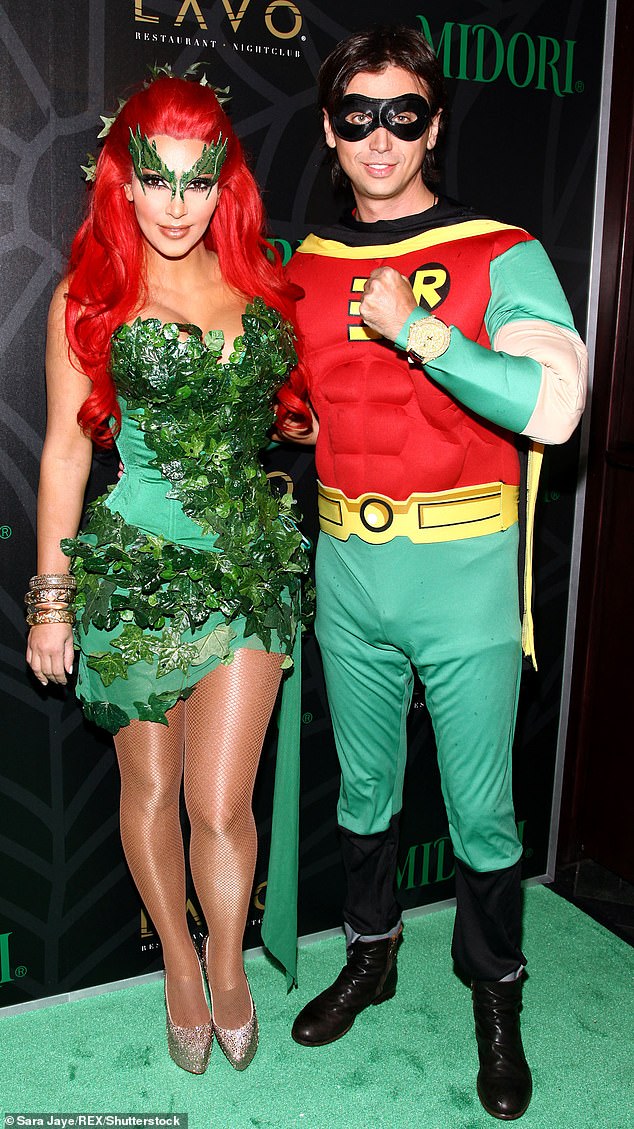 In the early days of the Kardashians’ fame, Kim also chose to dress up as Poison Ivy, complete with her very own ‘Robin’ (Jonathan Cheban) as she attended a Halloween party in New York in 2011. Kim wore a green corset dress, a lavish red wig and fishnet tights to create her look 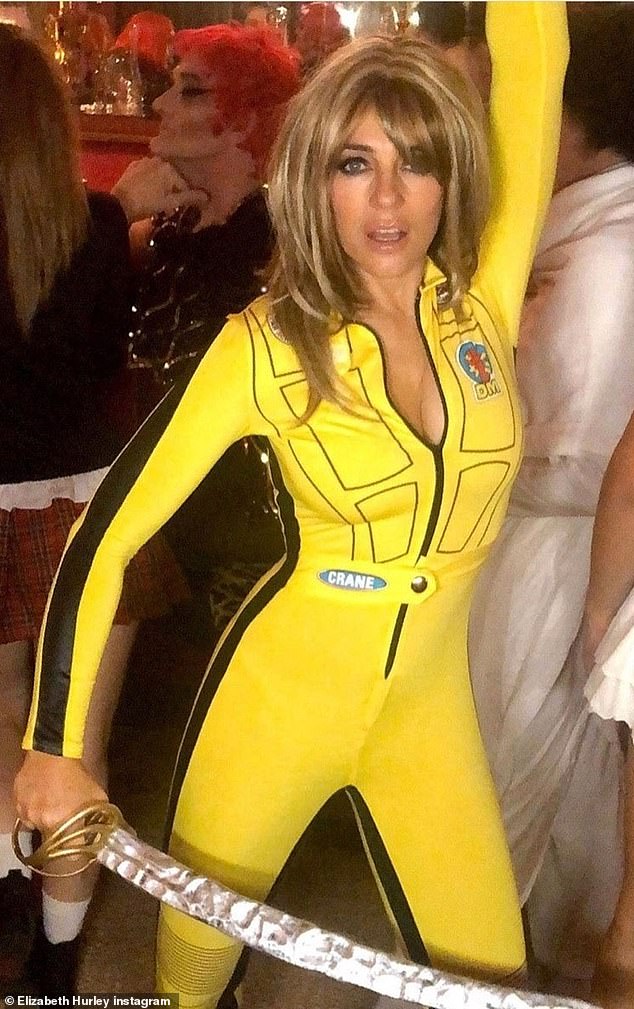 English actress Liz Hurley channeled Uma Thurman in her Halloween outfit as she donned a yellow catsuit to recreate the vengeful character of The Bride in 2003 Quentin Tarantino film, Kill Bill 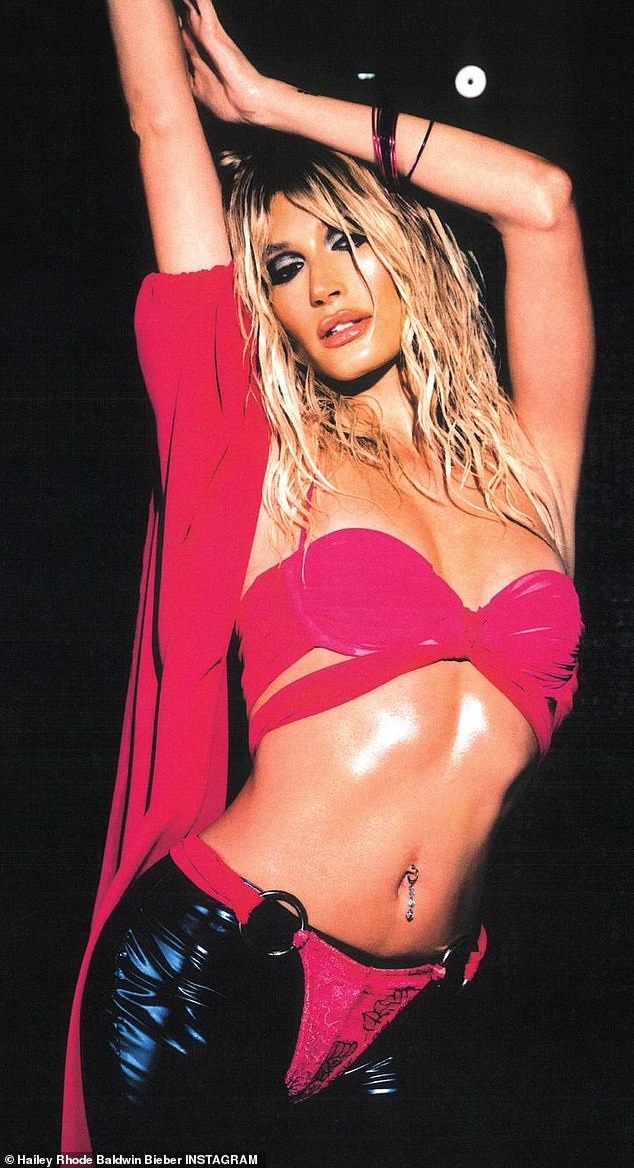 Supermodel Hailey Bieber also channeled another star in her Halloween outfit as she recreated an iconic Britney Spears look, compete with low-rise leather trousers and pink underwear as outerwear 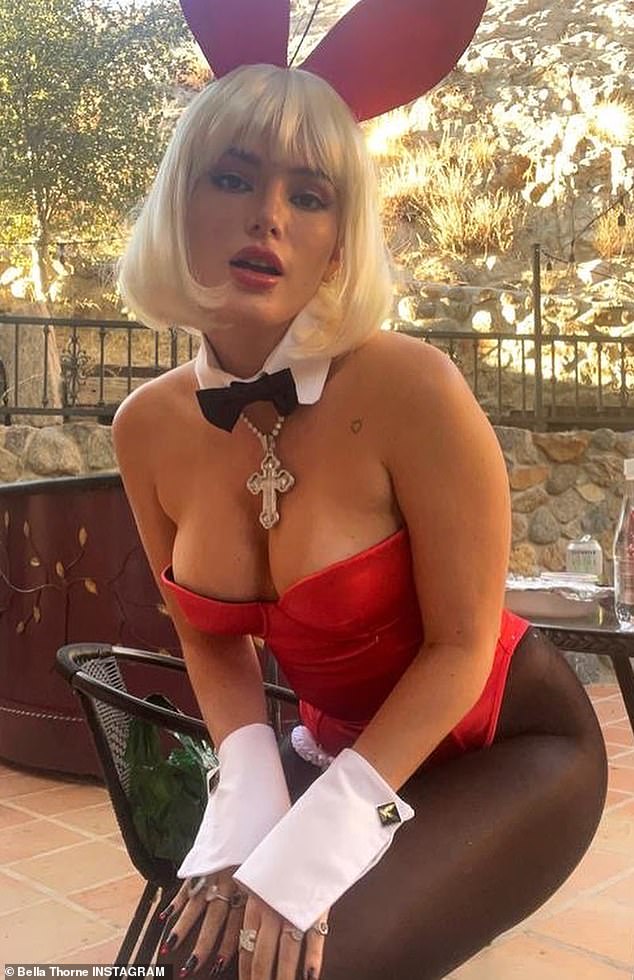 Bella Thorne took a leaf out of Paris Hilton’s book by dressing up as a Playboy bunny – but the actress chose to go for a slightly different look with black tights, a pink corset, cuffs and a collar 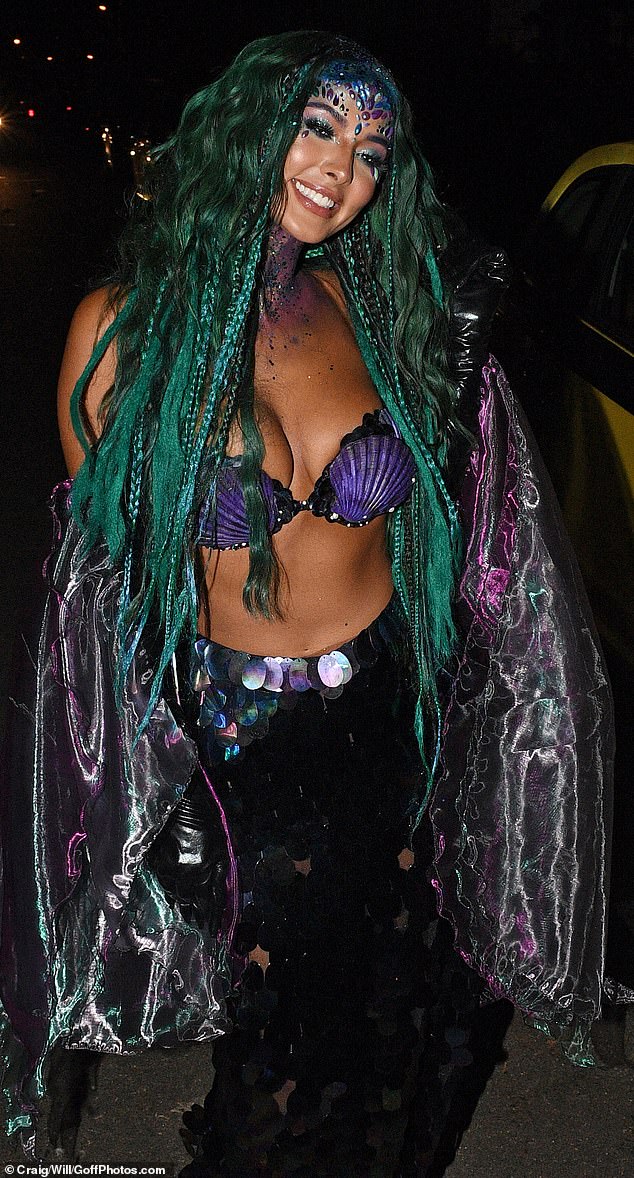 Over in the UK, TV presenter Maya Jama bared her toned abs as she donned a shell bikini and long green wig to dress as a mermaid as she attended fellow presenter Jonathan Ross’s Halloween party in 2019 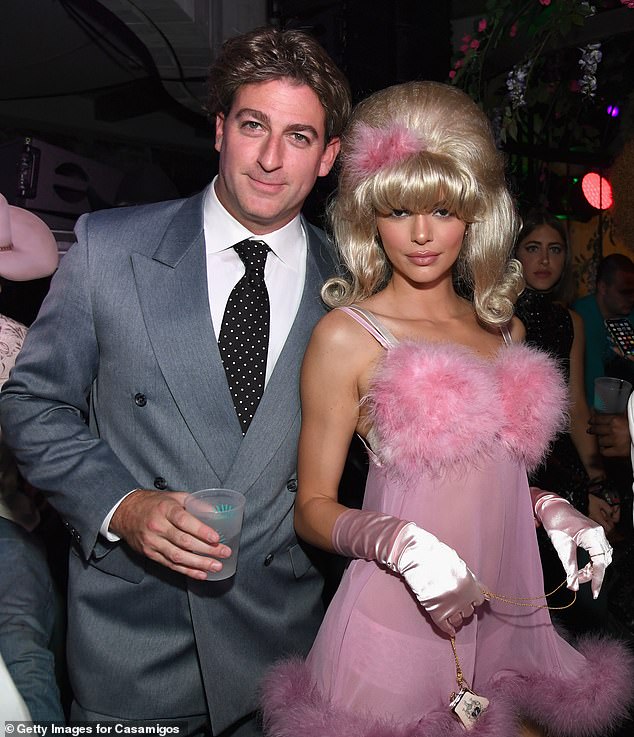 Taking inspiration from her sisters’ daring outfits, supermodel Kendall Jenner dressed in a babydoll lingerie dress with pink feathers, paired with a bouffant blonde wig to recreate one of the ‘fembots’ from the Austin Powers movies as she attended a Las Vegas Halloween party in 2018 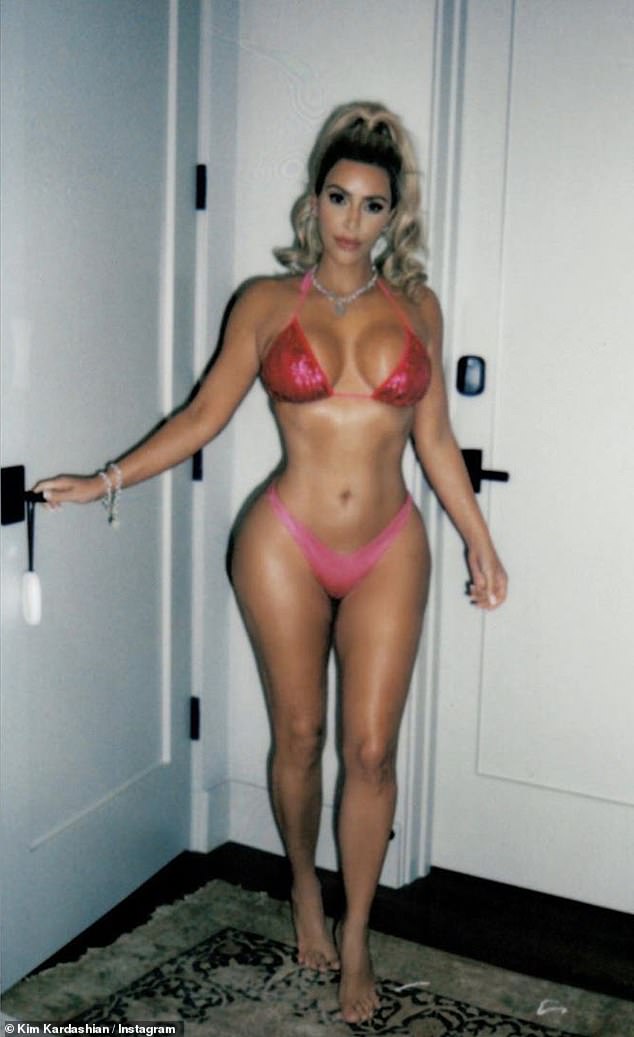 In Kim Kardashian’s second entry on the list, she donned a pink sparkly bikini and a Tiffany-style chain necklace and bracelet as she prepared to celebrate Halloween dressed as the character of Elle Woods from Legally Blonde

Supermodel Emily Ratajkowski channeled Raquel Welch as she recreated Welch’s cavewoman character from the 1966 film One Million Years B.C as she attended Travis Scott’s Halloween Bash in Hollywood in 2018

Supermodel Gigi Hadid is known for putting a lot of effort into her Halloween outfits, once donning a yellow suit and sitting for hours in make-up to transform into The Mask – but her iteration of Sandy from Grease, which she sported in 2015 at a New York party was perhaps her sexiest look