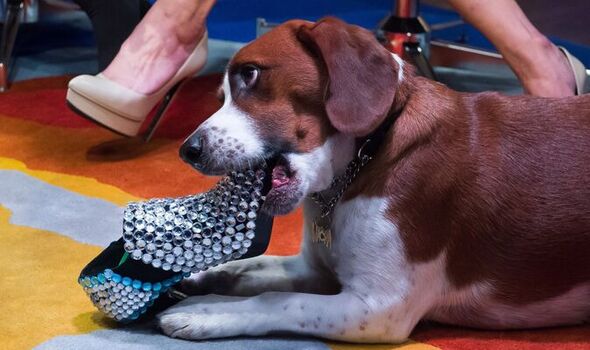 But 82 percent put the antics down to their cheeky character, while seven in ten find their misbehaviour “endearing”.

It also emerged 59 percent enjoy telling friends when their pets have been up to no good – including when they walk across their laptop while working, or beg for food from the table.

Other quirky habits included the human-like habits of refusing to go out in the rain, and making strange noises in their sleep.

Helen Skelton, TV presenter and spokeswoman for insurance provider Petplan, which commissioned the research, said: “Like humans, pets have strong personalities, and for many they are a key companion and member of the family – especially if they’ve been by our side for a while, like my dogs Barney and Spiderman.

“Lots of our pet friends have quirky traits, and mine are quite different – one is forever disappearing into the garden with a shoe, and our lab is no stranger to helping himself to the fruit bowl either, or bringing in a special “present”, or pinching sausages from the barbeque.

“Living on a farm surrounded by animals means that funny antics are a common occurrence. My dogs have been keeping me on my toes since day one, but like any other family member, that’s just their personality.”

The study also found that one in four (24 percent) have had to deal with a “gift” of live animals being brought into the house, while 14 percent have had their buttered toast licked behind their back.

And a fifth have watched in frustration as their pet totally ignored a brand-new toy – and chewed the rest of the house instead.

Despite this, three-quarters (74 percent) have a good relationship with their pet – and eight in ten believe that even when their pets are a cause of frustration, they wouldn’t change them in any way.

Helen Skelton, who is working with Petplan to launch its 2022 Pet Awards, added: “Our “pet peeves” are part of the reason why we love our pets and consider them members of the family.

“What better way to celebrate our furry friends than entering them in the awards? With categories such as Rescue and Companion of the Year, now is the time to give our furry friends the recognition they deserve, and be in with a chance of some amazing pet-friendly prizes.”