California drivers race to grab cash that rains down on freeway

A large amount of cash flew out of an armored truck and rained down on I-5 in Carlsbad, California, Friday morning, prompting drivers to stop their cars and race to pick up the money.

Authorities in Southern California are looking for the drivers who were seen grabbing large amounts of cash that rained down on a freeway Friday morning after the money fell out of an armored truck.

California Highway Patrol (CHP) troopers responded just after 9 a.m. to calls about drivers stopping in the middle of I-5 in Carlsbad to pick up "a large sum on money" that fell into the roadway, FOX5 San Diego reported.

The CHP and FBI have released images taken from several social media videos to determine the identities of those believed to have taken the cash. 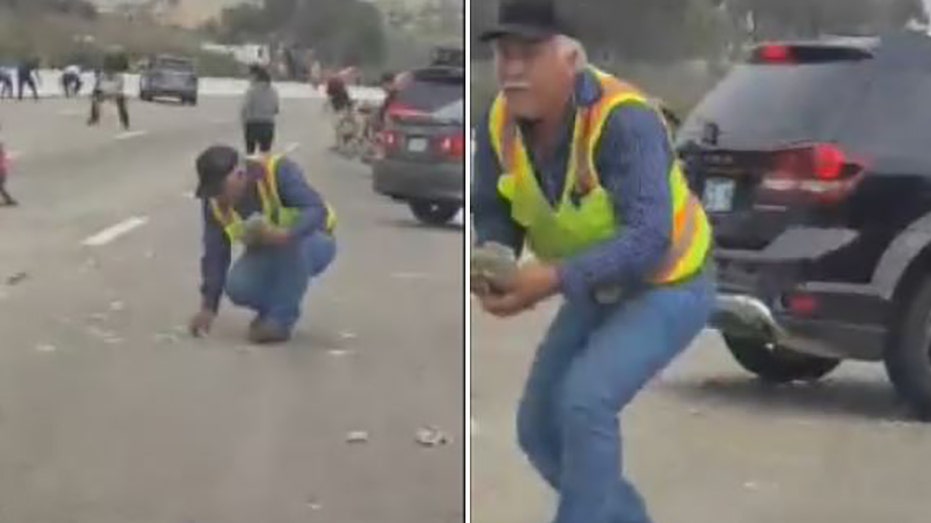 In this screengrab, drivers stopped their cars race to pick up the cash that flew out of an armored truck and rained down on I-5 in Carlsbad, California, Friday morning. (Travis Fisher)

Travis Fisher, who recorded video of the money-grabbing frenzy, told the station that he estimated there were thousands of dollars on the road.

"I see all these things floating around and I realize it’s money," Fisher said. "It was pretty crazy. Just everywhere, there was a sea of bills, everywhere." 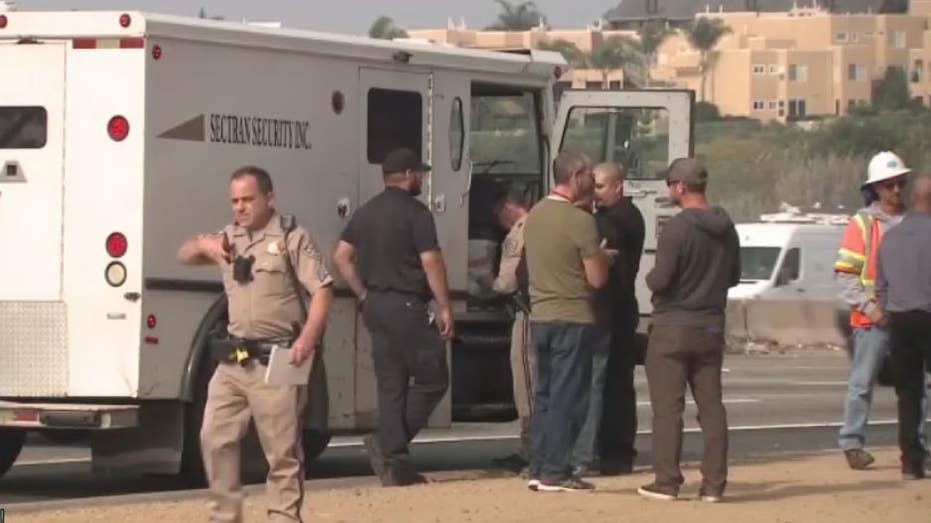 The Sectran Security Inc. truck’s doors popped open as it drove down the I-5 in Carlsbad after departing San Diego en route to an office of the Federal Deposit Insurance Corp., the CHP said. (FOX5 San Diego KSWB)

So far two people – a man and a woman – have been arrested on suspicion of taking some of the money after accidentally locking their keys inside their vehicle, which blocked traffic in the roadway, CHP officials told reporters at the scene.

Authorities urged those who took the money to return it to the CHP to avoid potential criminal charges.

"The CHP would like to thank those motorists who have already returned money to their local CHP office and remind the public to do the right thing and return any money they found on the freeway," the agency said in a news release.

Sgt. Curtis Martin of the CHP’s Oceanside division said one of the Sectran Security Inc. truck’s doors popped open as it drove down the I-5 in Carlsbad at around 9:14 a.m. Friday. He told reporters that the truck departed San Diego to an office of the Federal Deposit Insurance Corp. (FDIC).