A mother-of-two who was given just two days to live following her wedding in December is defying medical odds after a ‘remarkable recovery’.

‘We were told we were losing her and we were all called in to say our goodbyes,’ her mother Paula Milner said. 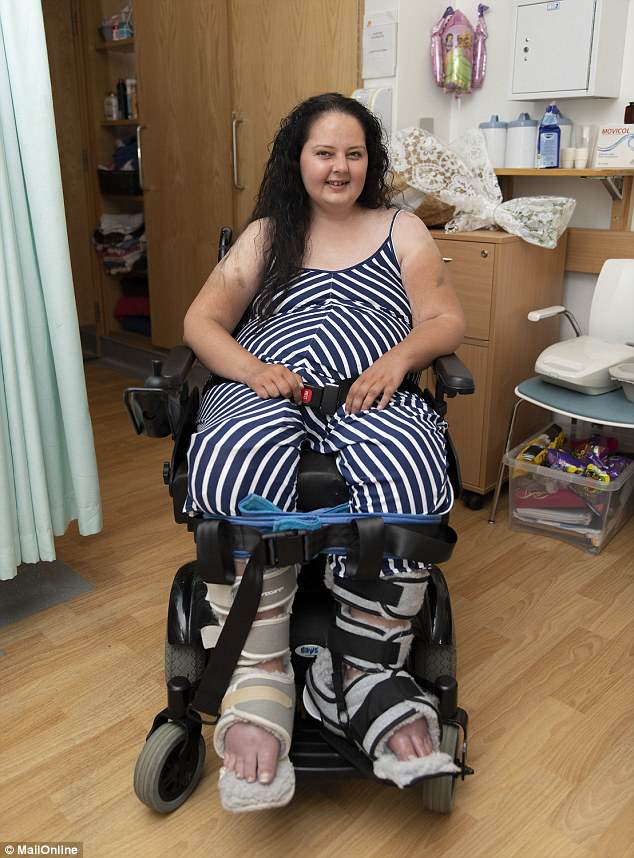 ‘She suffered a blood clot on her lung and was very, very poorly. We wanted to celebrate Christmas together, our last we thought with Martine.

‘We had to bring it forward by a few days because we were told she wouldn’t survive. We’re thrilled to say she defied all the odds, you don’t know my daughter, she’s a real fighter. She is so incredibly brave and positive and we just think she is amazing.’

Martine said: ‘Christmas came early for us in more ways than one.

‘I’m so relieved and happy I pulled through, I’d been scared of dying and didn’t want to leave my lovely family but now they’ve got to put up with me for a bit longer, maybe months but hopefully a few years.’ 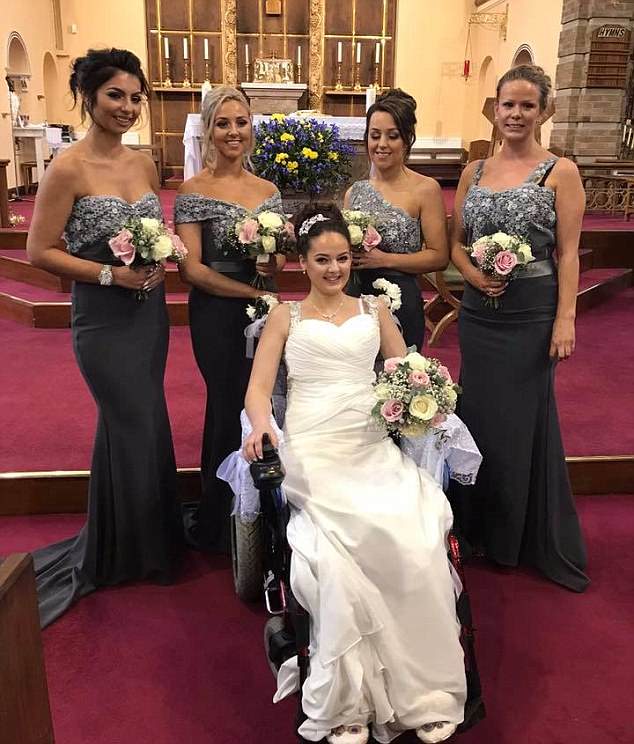 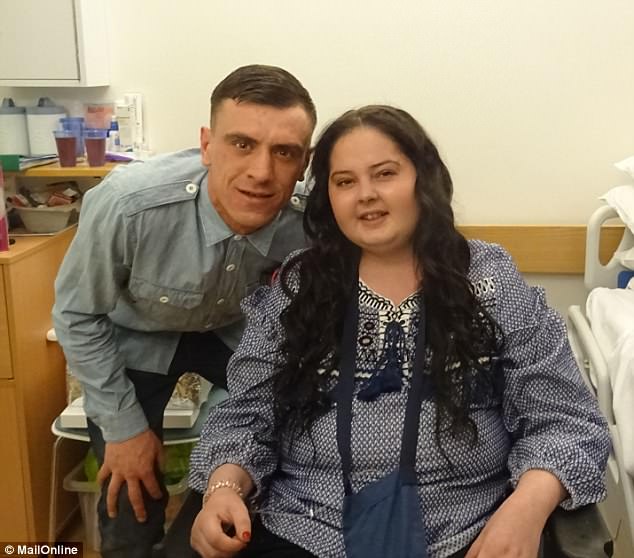 Seven months on from her wedding Martine is still being cared for in a hospice which for one special night had become her bridal suite.

Her nuptials went viral after a touching video captured the moment Martine was lifted from her wheelchair by proud groom Christopher Kilminster so they could dance to ‘I don’t want to miss a thing’ by Aerosmith.

Recalling the moment Martine said: ‘All I could think was ‘Help, he’s going to drop me!’ I hadn’t been expecting that.’

Martine and her mother Paula, 49 – her ‘angel’ – invited MailOnline to visit her after her latest remarkable recovery at the Marie Curie Hospice in Bradford. 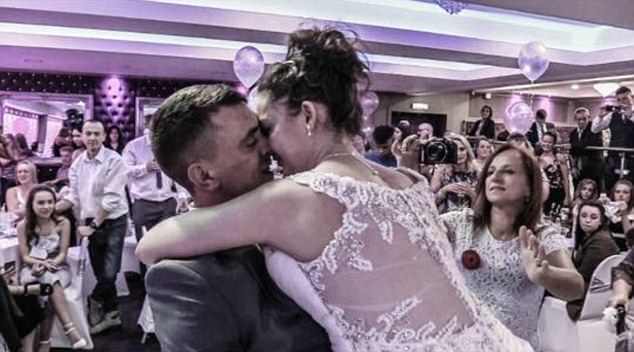 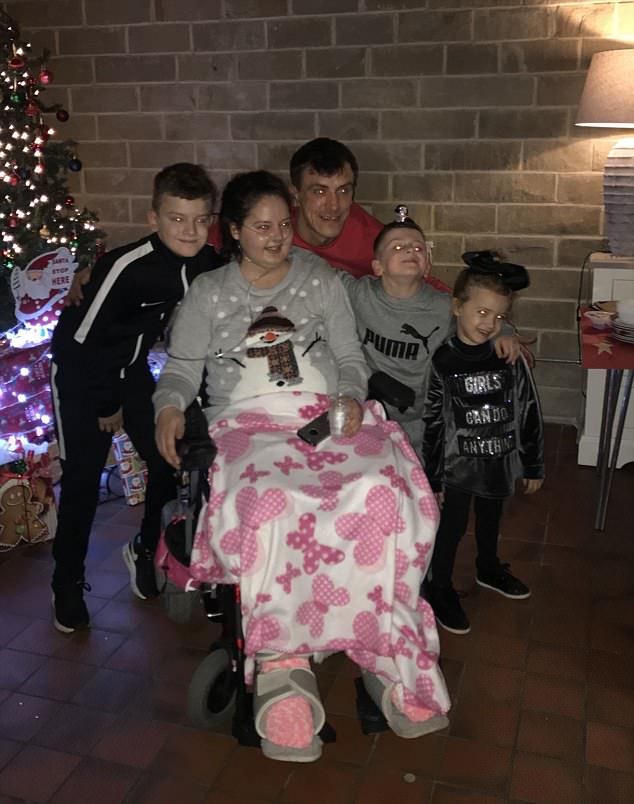 With her inspirational Northern no nonsense ‘don’t feel sorry for me, I don’t!’ attitude her mum admits it’s hard to imagine she’s dying.

Martine talks openly about her illness and the pain she battles caused by a tumour in her spine which has left her paralysed plus a secondary cancer in her neck and a rare brain tumour known as a glioblastoma.

Her arms are covered in bruises from steroid injections and her mum, who helps care for her every day and shares her bright room with a garden view at night.

Sadly for the time being Martine can no longer wear her wedding ring because steroids have make her fingers swell up and the rose gold diamond studded band is now too tight.

She said: ‘I keep it safely at home with my engagement ring. 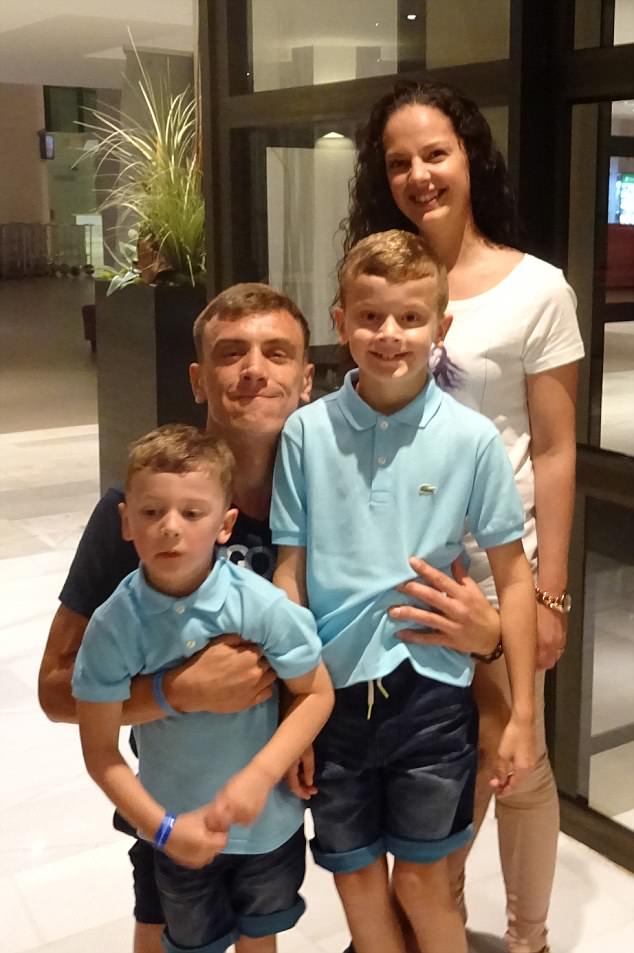 ‘I could hang them on a necklace but I think that looks tacky and I could have them enlarged but then they’ll be too big when my fingers shrink back.’

And talking about her wedding ring Martine recounts ‘a funny story.’

On her wedding day on October 28 last year, which she hastily arranged two months after being diagnosed with a terminal spinal tumour and being given 12-18 months to live, her best man Ben Kilminster, 25, her partner’s younger brother who was giving her away, lost her £500 ring.

She explained: ‘When he told me I said “Shut up, it’s a wind up” but he wasn’t joking. I could have killed him! In the end we had to borrow his grandmother’s ring.

‘We later got a new ring made up, very kindly gifted to us by the jewellers, which is inscribed with ‘Mr and Mrs Kilminster.”

After a beautiful wedding with 200 guests at St Clare’s Church in Fagley, Bradford, Martine returned to the hospice where her new husband was allowed to spend the night. 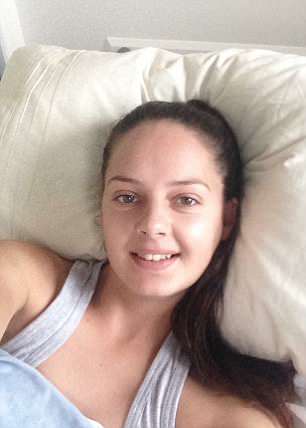 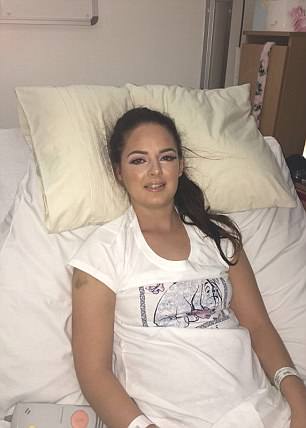 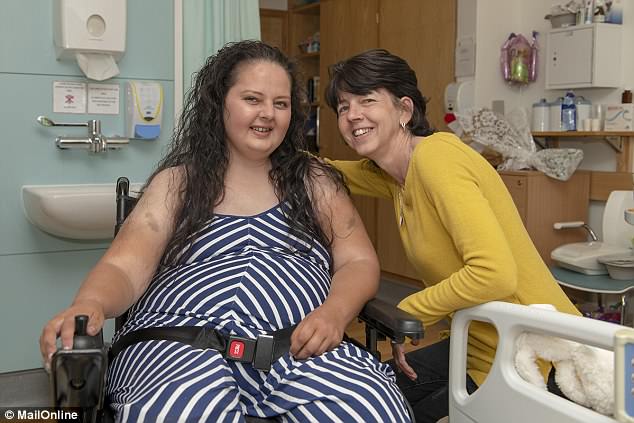 She had always been fit and healthy until she suddenly lost all feeling in her legs and medics discovered a huge stage four cancerous tumor on her spine last August which left her paralysed from the waist down.

She and Christopher, a childhood friend and partner of 11 years, decided to marry quickly which they had always intended to do ‘one day.’

The patient is now desperate to go home to begin a new independent life , to ‘start being a proper mum again’ and to stop her boys ten-year-old Christopher and Joseph, six, asking: ‘When can we be a real family again?’

But Martine needs a specially adapted home which her local council say they can’t provide.

Her latest round of chemotherapy has shrunk her tumour by more than half which will hopefully prolong her life, and although she still has to take 60 tablets daily, doctors have told her she will soon be able to leave the hospice.

Martine is having to to put up with a broken left hip after it was accidentally cracked two months ago when nurses moved her in bed.

She said: ‘My bones are so brittle and weak from treatment and when I was being turned on my side to be washed the hip broke. 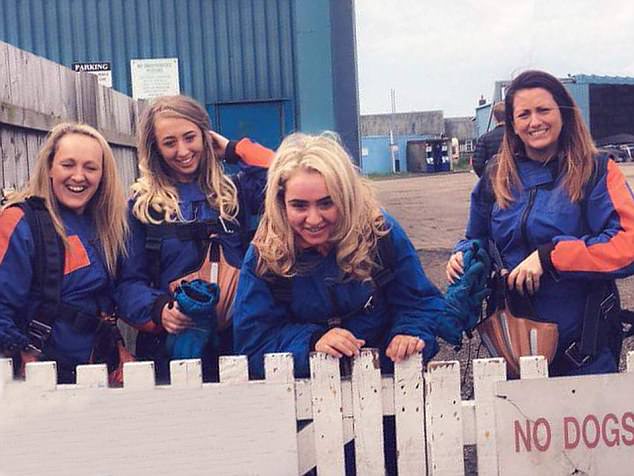 ‘It wasn’t their fault and I’m not blaming them but I’m a bit upset because it’s another setback.

‘They can’t operate but I’ve had an injection to numb the pain for two months. The hip will heal a bit but won’t fully repair.’

Martine had so many visitors at the hospital including her husband and sons, taxi driver dad Martin Milner, 56, brother Jonathan, 25, and her four bridesmaid and other friends that she ‘rarely has a chance to get bored.’

Her bed can even been wheeled into the pretty garden outside her room ‘so i can have a smoke and soak up the sun.’

WHAT IS A GLIOBLASTOMA?

Glioblastomas are the most common cancerous brain tumours in adults.

They are fast growing and likely to spread.

Glioblastomas’ cause is unknown but may be related to a sufferer’s genes if mutations result in cells growing uncontrollably, forming a tumour.

Treatment is usually surgery to remove as much of the tumour as possible, followed by a combination of radio- and chemotherapy (chemoradiation).

It can be difficult to remove all of the growth as glioblastomas have tendrils that extend to other regions of the brain. These are targeted via chemoradiation.

Glioblastomas are often resistant to treatment as they are usually made up of different types of cells. Therefore, medication will kill off some cells and not others.

The average survival time is between 12 and 18 months.

Only 20 per cent of patients live longer than a year and just three per cent survive over three years.

She added: ‘I try to take each day as it comes and daren’t think too much about how long I’ve got to live. I try not to feel sad. I’m just pleased I haven’t lost my hair after all the chemo. It’s so long and I love it.’

Husband Christoper has had to give up his job as a car trader to look after their sons and Martine can’t wait to back with her family.

She said: ‘That’s what keeps me going. When I was first diagnosed with cancer I was devastated and I never thought I’d spend my wedding day in a wheelchair. I’ve been told I’m only the 36th person in the world to have such a rare glioblastoma. I’m unique!’

‘I know I’ll never walk again but I want to have the independence of being at home and maybe getting a mobility car. I’ll always need a carer and my family will be there to help too – they’ve been amazing and so supportive.’

Her aunt Amanda Simmons from Harrogate, North Yorkshire, has recently set up a JustGiving fundraising page to raise £10,000 ‘towards helping Martine get a house that is suitable for her to live independently.’

Amanda, who took part in a sky dive at the weekend with three friends to boost the fund, said: ‘Since October 2017 Martine’s been taken care of by the brilliant staff at a hospice in Bradford but now needs to be getting home back to ‘normal’ life with her husband and two boys. Martine and her husband were due to complete on a mortgage but due to her illness is was declined.

‘All funds raised will go directly to help Martine get a house and have it adapted for her wheelchair so she can regain her independence and do all the things we take for granted, like making breakfast for her boys, getting them ready for school and doing bedtime.She is still facing a tough road.

‘I’m sure everyone who knows Martine, the first thing you think of when you think about her is her smile, lets all help keep my beautiful niece smiling and get her home?’

Martine said: ‘I’ve got a future to look forward to, how long it will last I don’t know, but once we’ve got a new home I can start planning my honeymoon.’