The Duchess of Cornwall has said we will all have to ‘make the best’ of Christmas as she invited children with serious medical conditions to help decorate her tree virtually at Clarence House on Wednesday.

Speaking before the Prime Minister announced millions would move into a stricter tier on Sunday, Camilla, 73, who donned a royal blue dress by Edina Ronay, added families would have to find the ‘safest way’ to celebrate Christmas during the holidays.

The duchess’ comments were made after her annual Christmas tree decorating event with children and families supported by Helen and Douglas House children’s hospice.

Camilla and the Prince of Wales will celebrate Christmas at Highgrove, their Gloucestershire home, after the Queen and Duke of Edinburgh decided to forego the traditional royal gathering at Sandringham and enjoy the festive period ‘quietly’ as a couple at Windsor Castle. 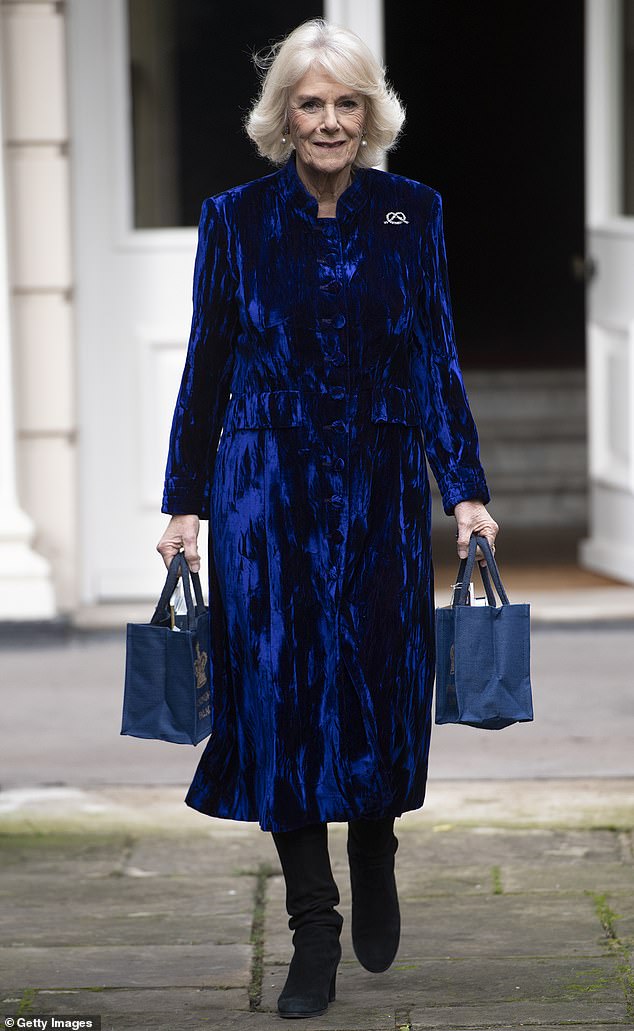 The Duchess of Cornwall, 73, arrived with gifts for the children and families supported by Helen and Douglas House children’s hospice on Wednesday 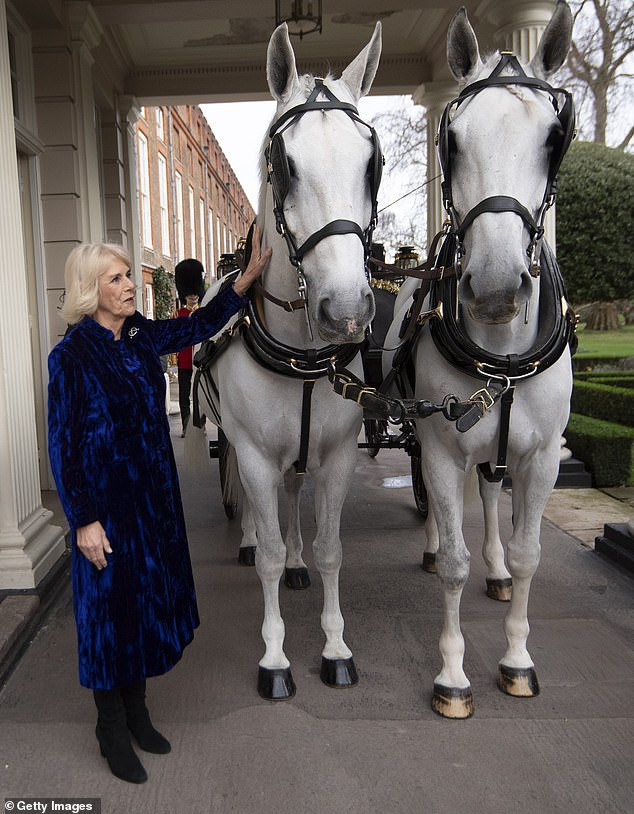 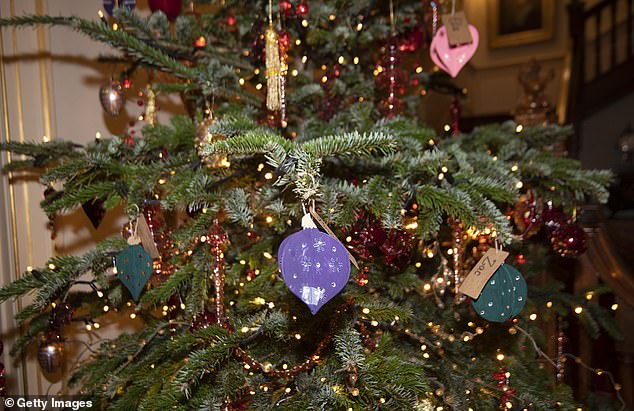 The Duchess of Cornwall decorated the Clarence House Christmas Tree virtually with children from Helen & Douglas House Hospice, on December 16 2020 in London (pictured)

On Saturday, Boris Johnson effectively cancelled Christmas for almost 18 million people when he announced London, and areas in eastern and south-east England would move from Tier 3 to Tier 4 restrictions on Sunday.

After the festive event held at Clarence House, the duchess was asked how her Christmas was going to pan out.

She replied: ‘Well I don’t really know. They are changing things every day. Every day we are going somewhere, and then it changes. I suppose we shall just be at home and see who we are going to be able to see.

‘It’s not going to be a Christmas like others this year. And we have just got to make the best of it. Even if it is just meeting up outside or in the garden. 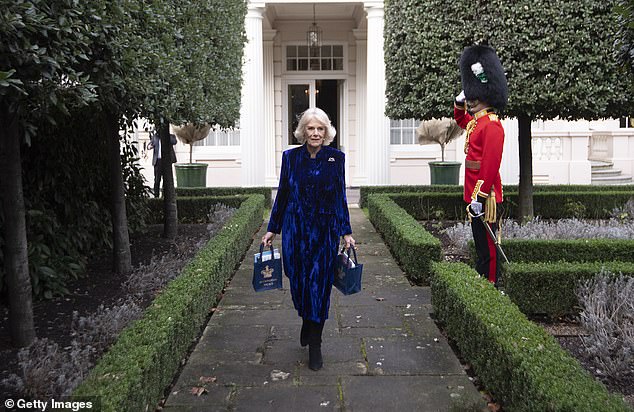 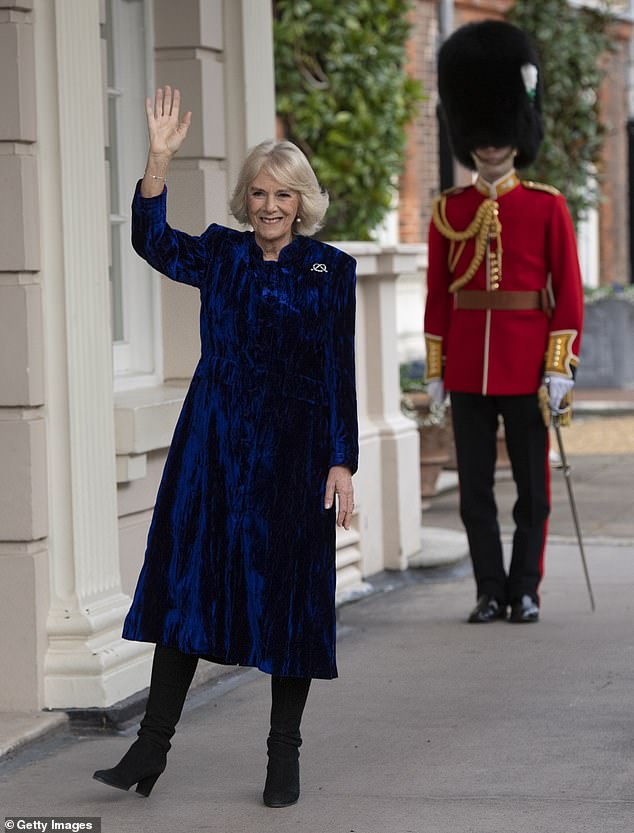 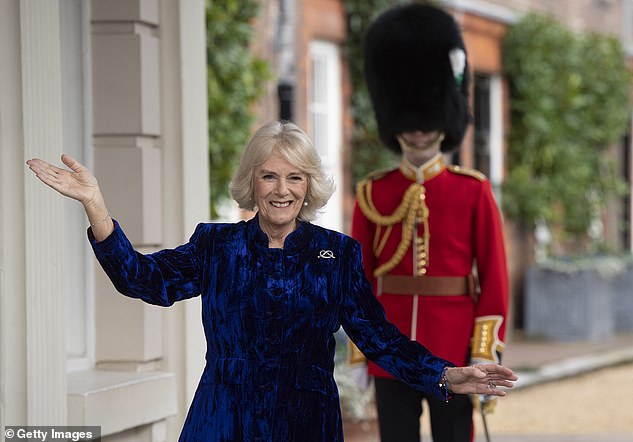 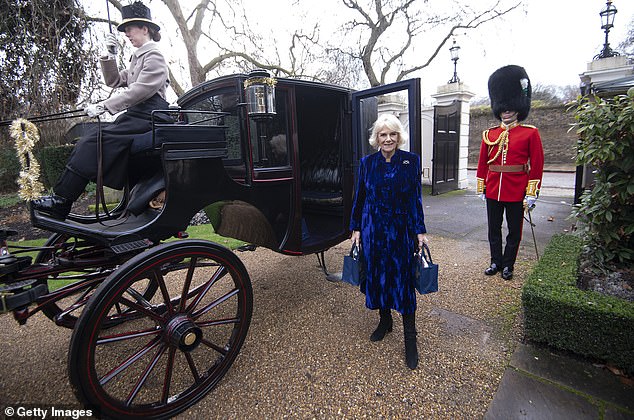 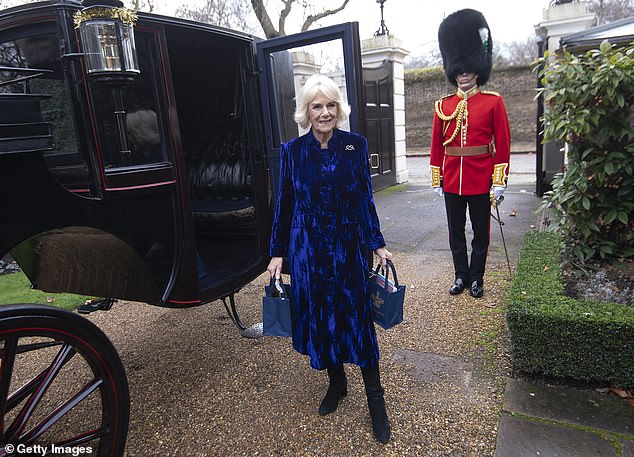 She comes bearing gifts! Dressed in an eye-catching gown, the Duchess was ready to take on the day 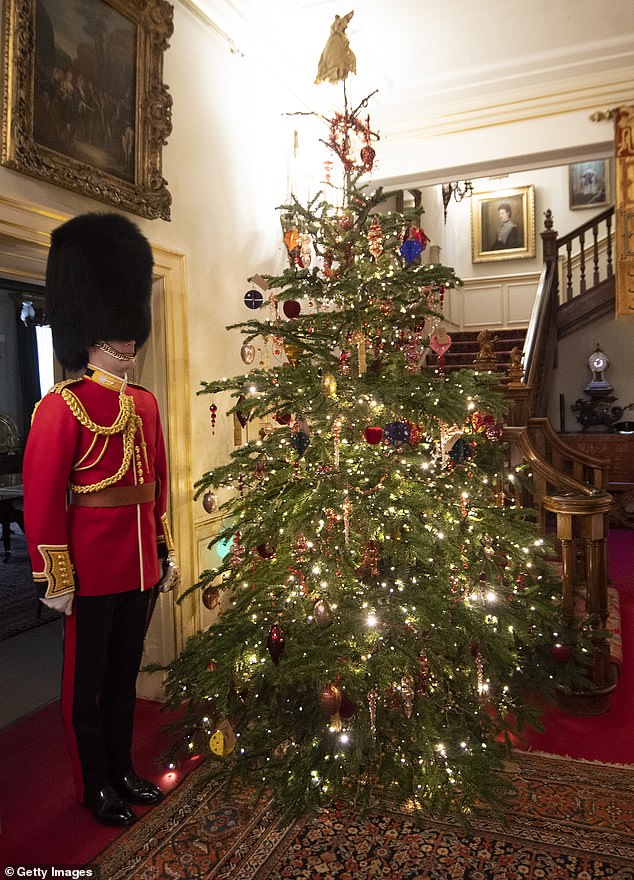 ‘We’ve got to talk to our families, it’s just a question of trying to find the safest way to do it. ‘

When the Queen and Philip announced their Christmas plans at the beginning of December, it was understood Charles would visit his parents sometime over the festive period, but people have been advised not to enter Tier 4 areas – which Windsor falls under.

The duchess held her Christmas tree decorating event via video link this year because of Covid-19, but her equerry, Captain Charlie Ross, was on hand to carefully put baubles – featuring the names of children taking part – on the tree.

When she chatted to Vicky Newell, whose seven-year-old daughter Jessica was born with a severe neurological condition, she asked if the youngster got pleasure from a colourful tree behind them. 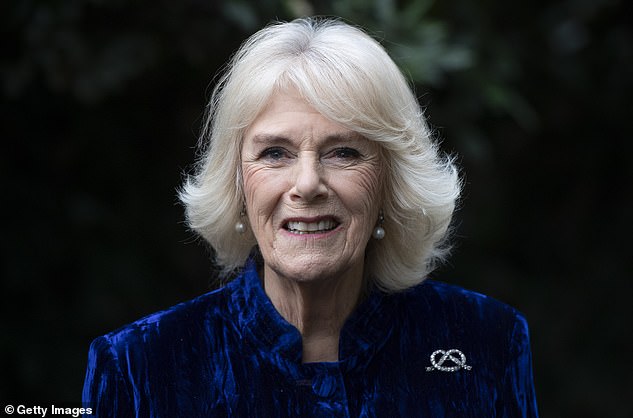 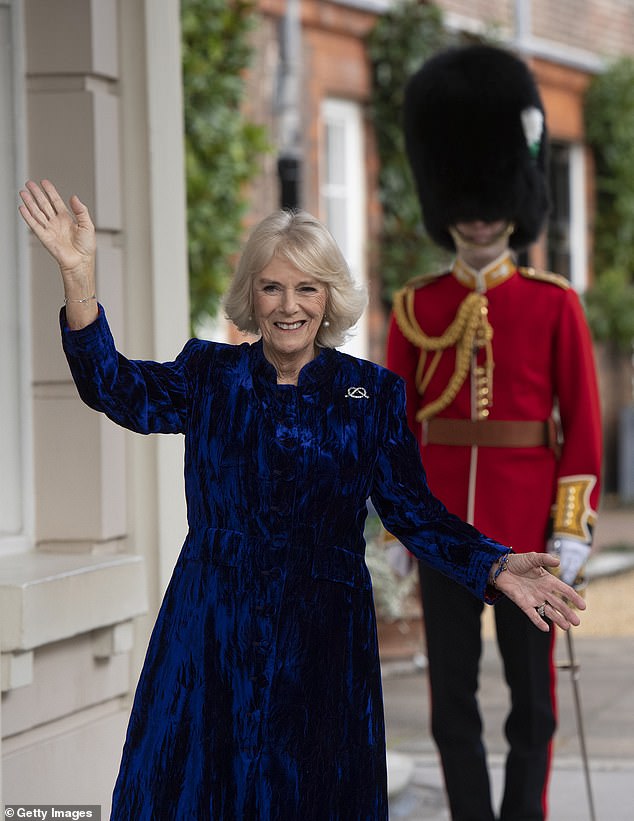 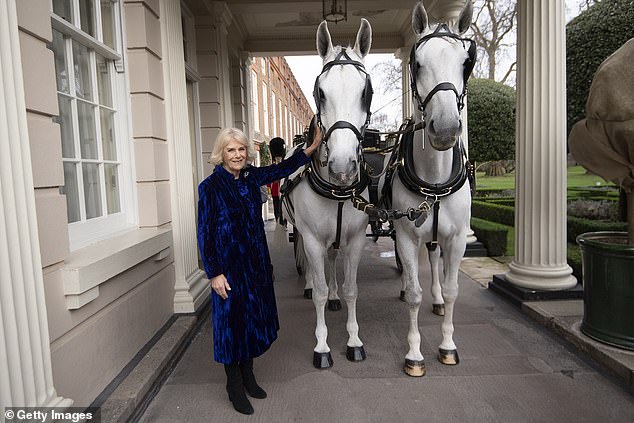 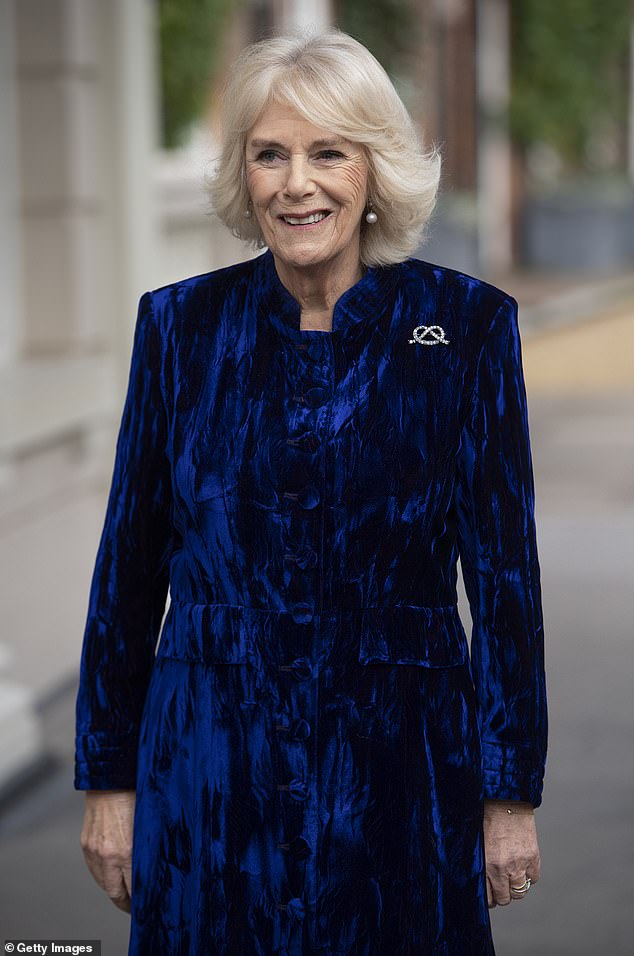 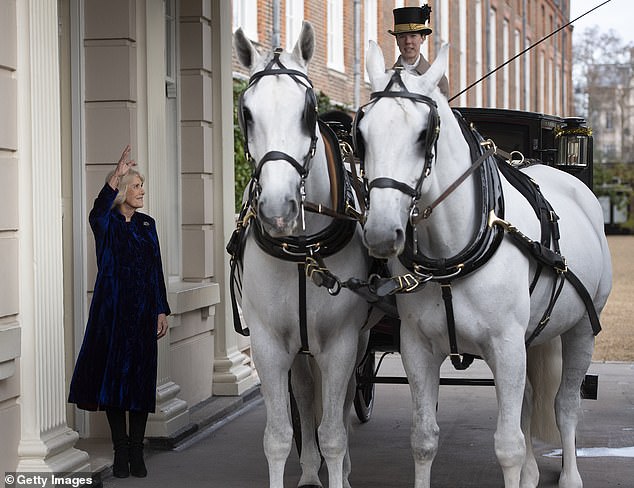 A royal wave! Camilla, who said the Helen and Douglas House hospice were ‘an incredible lot,’ stressed the importance of their help line

Ms Newell replied: ‘I think it does, yes, it gives her a lot of joy. And we can’t thank Helen and Douglas House enough, they have given us a lot of support over the years. We couldn’t do it without them.’

The duchess responded: ‘No, they are brilliant. Usually, I like having you all here, it’s very exciting getting everybody in and having lunch and seeing the Christmas tree.

‘But like many things this year, it’s gone by the by. So we are doing the best here, with these screens, that we can.’

She said about the Helen and Douglas House hospice: ‘They are an incredible lot there, aren’t they? It’s so important to have someone at the end of the line you can call 24 hours a day. 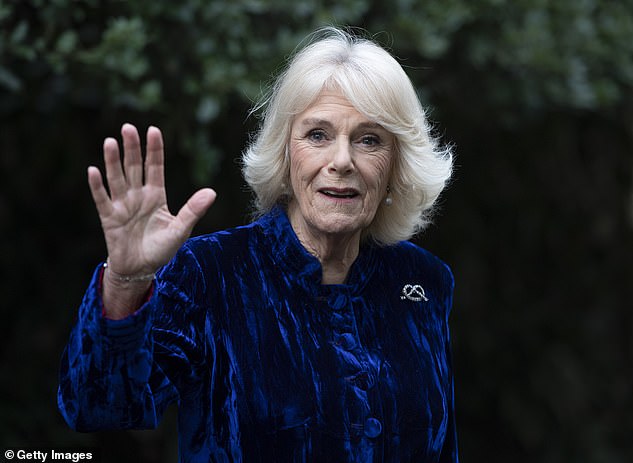 ‘They just look after all these children so well. I always notice when I go in the atmosphere is very uplifting. It’s a very happy atmosphere.’

Helen and Douglas House, which opened in 1982, provides medical, emotional and practical support for families who have a child who will die prematurely.

The duchess also arranged for the children to receive a Buckingham Palace gift shop goody bag – including a toy corgi, a guardsman Christmas decoration, a crown-topped pencil, stickers and a book by Charlie Mackesy.

The bags were whisked away from the royal residence by the Royal Brougham – a horse and carriage that transfers post twice a day between Clarence House and Buckingham Palace – before magically arriving at each of their homes. 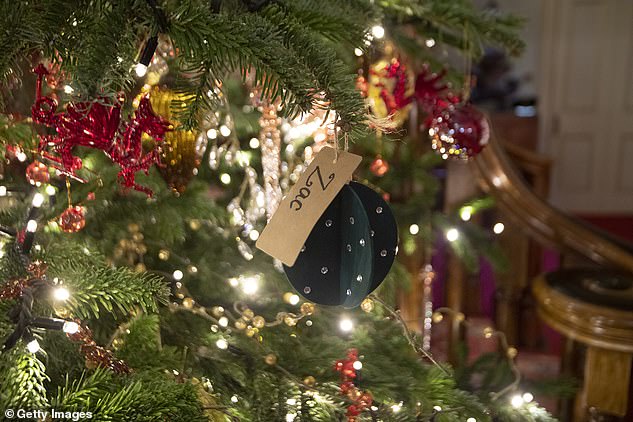 The royal’s equerry, Captain Charlie Ross, was on hand to carefully put baubles – featuring the names of children taking part – on the tree (pictured) 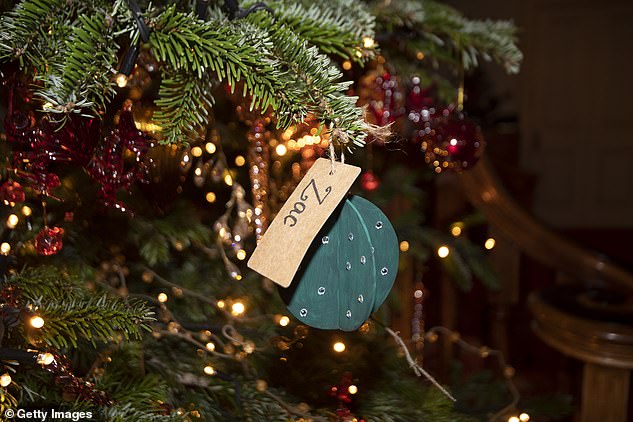 One of the ornaments put on the tree, reading ‘Zac’. The baubles seen during the virtual event featured the names of some of the children taking part