They were one of the highlights of last week’s state banquet – a glorious riot of red seasonal blooms picked from the palace gardens.

And thanks to the Queen Consort they are now bringing joy to elderly visitors at a London day centre, many of whom haven’t been able to treat themselves to a bunch of flowers in years.

Floral arrangements have always played an important role in the dressing of the table in the ballroom at Buckingham Palace when entertaining VIP visitors, providing a visual feast to complement the table.

The King is keen to carry on with the tradition, but for his first state banquet as monarch insisted on the displays using only seasonal flowers picked largely from the palace gardens and the Windsor estate as part of a greater drive for sustainability. 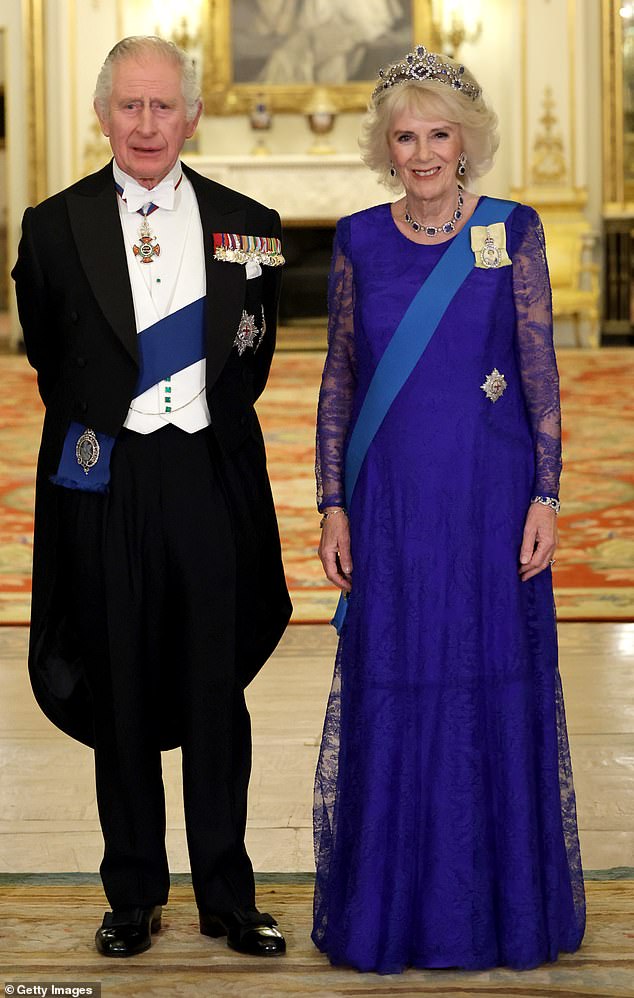 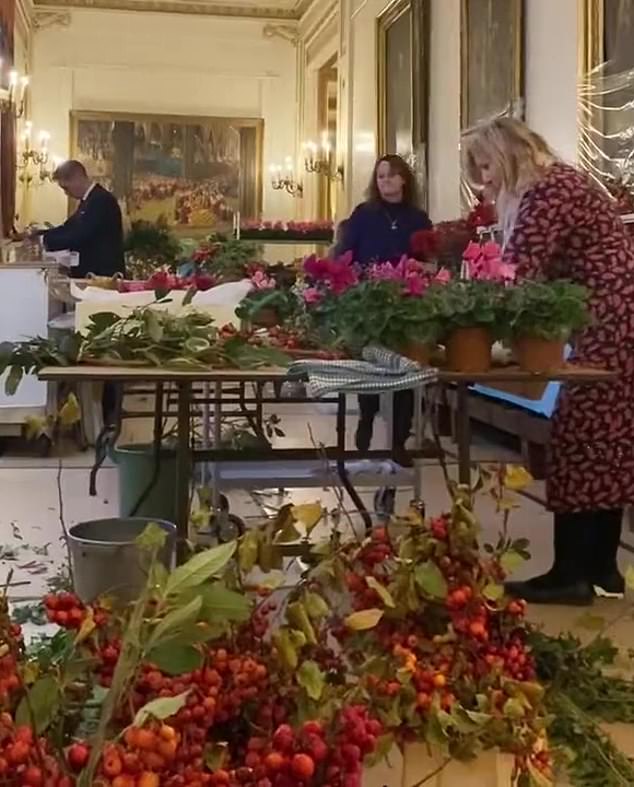 Now his wife is continuing his eco-friendly memo by ensuring that the arrangements are recycled and reused for the benefit of those less fortunate.

As Duchess of Cornwall she was a committed supporter of Floral Angels, a small but worthy charity created in 2013 to recycle and reuse flowers from events, weddings and retailers.

Staffed entirely by volunteers, it delivers bouquets and arrangements to those in the community who would not normally receive flowers including hospices, care homes, shelters and women’s refuges.

Their work also helps to support the industry in reducing waste.

Camilla, 75, has remained patron of the charity as Queen Consort and last week quietly arranged for the flowers used at Tuesday’s state banquet to honour the South African President to be distributed by the charity at a number of locations in London.

The Mail had exclusive access as the Floral Angels team, who are given free space in the capital’s New Covent Garden Flower Market in by event florists Pinstripes & Peonies, took delivery of the displays and turned them into smaller, more manageable posies. 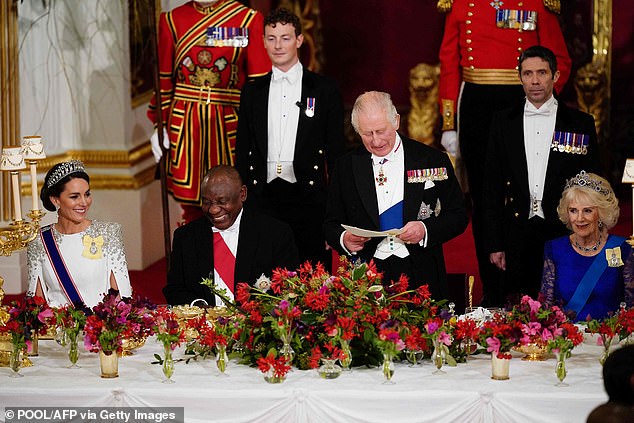 After taking centre stage at last week’s banquet (pictured), the flowers have now been redistributed by the charity Floral Angels

The charity’s co-founder Frances Hunter explained: ‘We are so grateful for Her Majesty’s continued support.

‘We know how much life has changed for her but she has been such a great source of help and encouragement.

‘How wonderful to think that the flowers from Buckingham Palace are now going to make such a difference to people’s lives. It’s such a simple thing but means a lot to those who receive them.

‘Some of the women we see at the refuges and shelters say they have never been given so much as a flower in their lives. It really brightens up a very dark and difficult time for them.’ 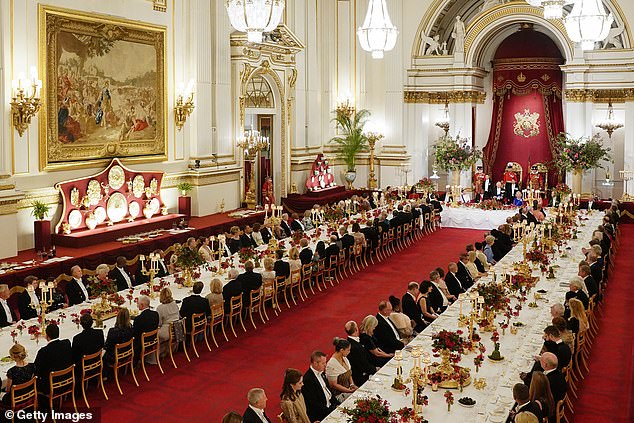 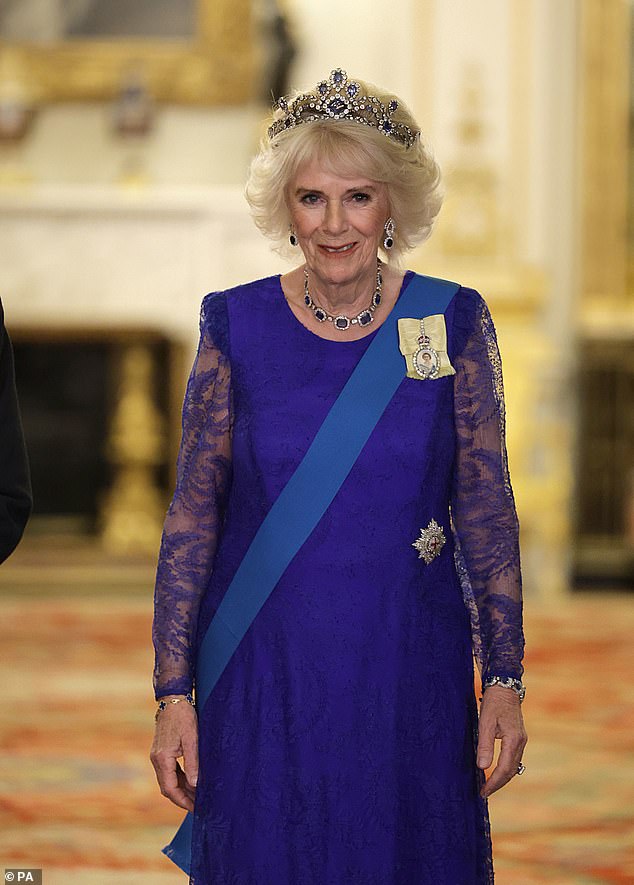 A spokesperson for Age UK Wandsworth, one of the recipients of the flowers, said is was ‘so kind of the Queen Consort (pictured) to think of us’

At the moment the charity is only able to deliver flowers to organisations in and around London, although they would dearly love to expand their services.

One of the recipients was Age UK Wandsworth, which provides social activities for around 25 elderly people a day, where deputy manager Frank Colley said: ‘When we were told that the flowers had come from Buckingham Palace we simply couldn’t believe it. The smiles on the faces of our users was really something to see.

‘It’s so kind of the Queen Consort to think of us. Floral Angels is such a brilliant charity.

‘It brightens out day when we take a delivery and everyone talks about it in the centre. Even as I am talking to you the smell of them is wafting through the centre.

‘With everything going on with the cost for living, it such gives our people such mental positivity and a smile on their face. They feel so special.’

For further details of how to support the charity see floralangels.com