Motorists will be promised new policies to encourage the adoption of electric vehicles in a federal move to examine fuel efficiency standards and lift barriers that have been blamed for keeping popular overseas cars out of Australia.

The decision clears the way for updated rules that could encourage global car makers to sell more EVs in the local market, with Volkswagen Australia chief executive Paul Sansom saying he was struggling to convince his parent company to supply more vehicles under the existing regime. 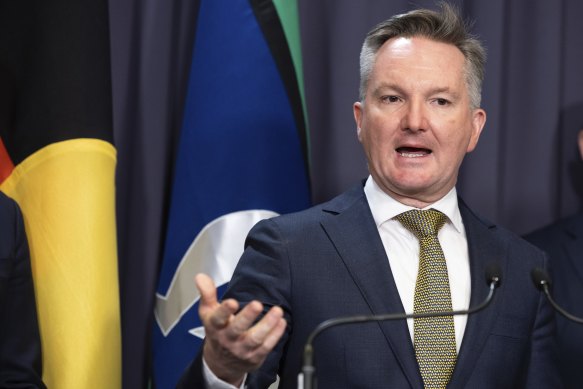 Federal Climate Change and Energy Minister Chris Bowen: “We believe that now is the time to have an orderly and sensible discussion about whether vehicle fuel efficiency standards could help improve the supply of electric vehicles into the Australian market.”Credit:Alex Ellinghausen

Climate Change Minister Chris Bowen will take the first step towards overhauling the fuel efficiency standards by putting them on the agenda at a summit on Friday as a way to make sure consumers are offered a wider range of “no-emissions” cars.

But the move is likely to renew a debate over the competing costs and benefits to households from stricter standards that could reduce greenhouse gas emissions, an issue the Coalition government considered in 2015 without a resolution.

“We are experiencing significant cost-of-living challenges. And giving Australians better access to options which allow them to never lift the nozzle on a petrol pump again is a good cost-of-living measure,” Bowen says in an extract from a speech to be delivered on Friday.

The minister will tell the National Electric Vehicle Summit in Canberra that existing fuel efficiency standards are limiting freedom of choice in the market because they create a barrier to the wider adoption of vehicles that do not need petrol or diesel.

“We believe that now is the time to have an orderly and sensible discussion about whether vehicle fuel efficiency standards could help improve the supply of electric vehicles into the Australian market, to address the cost-of-living impacts of inefficient cars, and to reduce emissions from the transport sector,” he says.

Bowen says Australia is the only OECD country apart from Russia to not have, or be in the process of developing, fuel efficiency standards.

“The lack of such standards in Australia is cited as one of the factors impacting the supply and cost of EVs,” he says.

“Why? Because while Australia doesn’t show leadership, manufacturers prioritise markets which do.

‘While Australia doesn’t show leadership, manufacturers prioritise markets which do.’

“It means consumers aren’t getting the choice available internationally and as the world moves towards more efficient and cleaner vehicles, we risk becoming a dumping ground for older technology which can’t be sold in other markets.”

Greens deputy leader Mehreen Faruqi will also call for fuel efficiency standards at the summit, saying they’ve been mandatory in the United States, China, Japan and Europe for decades.

“It is clear what needs to be done, we don’t need more reviews or consultations. We just need to get on with it,” she said in a statement on Thursday.

“At the moment we are already a dumping ground for dirty, expensive, inefficient vehicles, and it is only going to get worse.”

The Abbott and Turnbull governments began considering fuel standards in 2015 but struggled with the debate over the cost to households and shelved most of the plans.

Fuel efficiency standards work by setting an average level of efficiency for new cars to be measured by the litres of fuel needed to travel a certain distance or the volume of greenhouse gas emissions produced for every kilometre travelled.

The Australia Institute issued a call for the standards last week, saying consumers would have saved $5.9 billion on fuel costs if the government had updated the standards in 2015 and cut carbon emissions in the transport sector.

Its analysis was based on a finding that the average carbon dioxide intensity for new passenger vehicles in Australia in 2018 was 169.8 grams of carbon dioxide a kilometre compared to 129.9 grams in the US, 120.4 grams in Europe and 114.6 grams in Japan.

Sansom said Australians would only get access to popular new EV models if fuel efficiency standards were introduced because there was a global shortage of the vehicles, and companies sent them to the markets where they were compelled to sell them.

He was constantly calling on the company’s European head office to supply new EV models to Australia but was being rebuffed.

He said the standards were in keeping with the government’s broader climate goals because unless the nation’s fleet was electrified quickly, Labor would not be able to meet its net zero target.

The industry’s peak body, the Federal Chamber of Automotive Industries, recently adopted a voluntary emissions standard, but Volkswagen, which has an aggressive global EV strategy, is pushing for the government to make it compulsory.