Almost a million Australians could be stuck on JobSeeker for years after being excluded from the Morrison government's job-saving wage subsidy program amid complaints it is too focused on male-dominated industries to bring the country out of recession.

Analysts, unions and Labor accused the government of not doing enough to support women or people over the age of 35 in the budget, which Treasurer Josh Frydenberg said was focused on boosting employment. 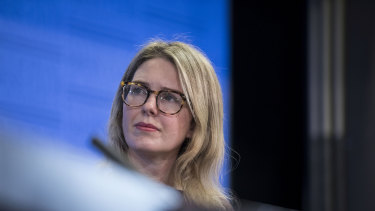 Danielle Wood says it appeared the government was relying on general economic growth to secure employment for older Australians.Credit:Dominic Lorrimer

She said it appeared the government was relying on its forecast increase in economy activity to deliver jobs to older Australians.

"Given forecast unemployment of 7.25 per cent in June quarter next year under pretty optimistic assumptions [women and older Australians] might be forgiven for feeling let down," she said.

"A recession can also lock older workers out of the workforce, and at a point in their career when it's difficult to get back in," he said.

"So we would have liked to see hiring incentives extended also to older workers, rather than pinch pennies by restricting it to the young."

"We applaud the incentive to bring youth into work but it must be done in a way that balances the needs of older women. Particularly when you look at 'older women' in this case meaning anyone over the age of 35," she said.

Labor spokeswoman Julie Collins was sceptical programs aimed at apprenticeships and the JobMaker scheme would end up with more women in work.

"If you're a woman in her 40s who's been on JobKeeper during this recession, had your hours reduced … working in one of those industries such as hospitality or retail, and come March or April you lose your job, what is in the budget for you?" she said.

SDA national secretary Gerard Dwyer said female workers had suffered the most through the recession but they had been left behind.

"It is a blue budget for a pink recession," he said.

The budget's women's economic security statement highlighted the huge number of women who lost jobs in the hospitality and retail sectors due to the pandemic.

Yet it lists support for the creative sector – including $250 million in loans and grants that Mr Morrison said were "as much about supporting the tradies who build stage sets" as helping performers – among its key measures for recovery.

The government has so far spent $2.8 billion to encourage employers to keep their apprentices on and plans to spend another $1.2 billion on new hires.

But just 14,000 of the 180,000 apprentices supported so far were women, the economic statement reveals.

The $231 million women's economic security package offers a range of grants for start-ups and leadership development, a new program offering 500 cadetships in maths and science careers, and setting up a council to address sexual harassment in workplaces.

Its largest measure, worth $90 million, changes the work test for people seeking paid parental leave so they can still get it even if they've lost their job over the past six months. It will help 9000 pregnant women and about 3500 partners.