‘I will find you, and I will kill you’: Woman issues hilarious threat inspired by Liam Neeson’s infamous Taken speech to the thief who stole her pricey make-up delivery

A beauty fan who had ordered a package full of expensive make-up only to find it had gone missing issued a sinister Taken-inspired threat to the ‘tramp who stole my parcel’.

Another tenant spotted the poster, which had appeared on the front door of the block of flats in an unknown location in the UK, and shared the image on Reddit explaining that their letterboxes were ‘not very secure’.

The message from the angry online shopper had been inspired by the famous speech made by Liam Neeson in the hit movie Taken, in which he plays a retired CIA agent who warns his daughter’s kidnappers he is coming to find them.

The make-up’s rightful owner warned ‘I will find you and I will kill you’ if the guilty party didn’t return their package from website Beauty Bay, which contained a £19 pot of Anastasia Beverly Hills Dip Brow Pomade. 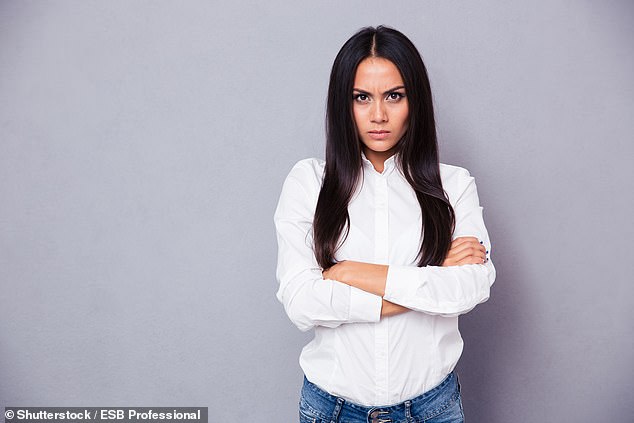 A mystery beauty fan was left seething when a parcel ordered from the internet went missing from their letterbox in a block of flats, and posted a chilling threat begging for its return 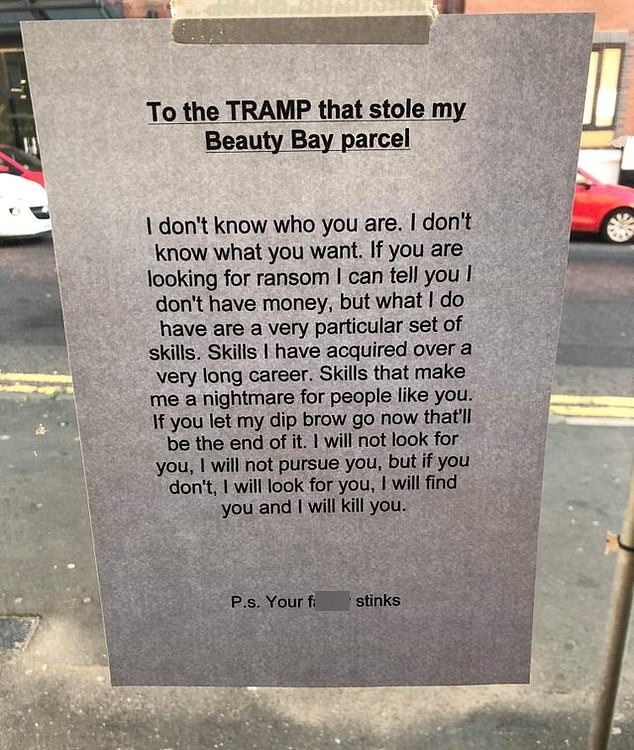 A tenant of a block of flats in the UK shared a poster that had gone up at the entrance door following the theft of a parcel that contained expensive ‘dip brow’ make-up. They posted it with the caption: I live in an apartment block and our letterboxes aren’t very secure… and this happened’

‘To the TRAMP that stole my Beauty Bay parcel,’ the mystery person behind the poster began.

‘I don’t know who you are. I don’t know what you want. If you are looking for ransom, I can tell you I don’t have money, but what I do have are a very particular set of skills.

‘Skills I have acquired over a very long career. Skills that make me a nightmare for people like you.

‘If you let my dip brow go right now that’ll be the end of it.

And then to finish they bizarrely added: ‘P.S Your f***y stinks.’ 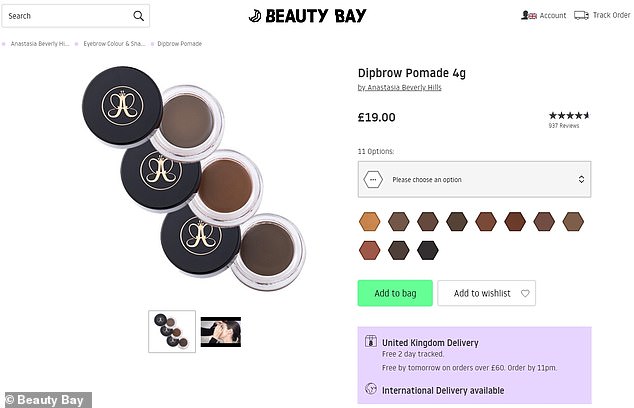 The sign was posted on a Reddit thread with users agreeing that the beauty fan had every right to be this angry because the product was so expensive.

Explaining to others who were unsure what ‘dip brow’ was one said: ‘It’s an eyebrow product, it’s like a kind of creamy stuff you apply with a brush to fill in gaps or shape your brows. And it’s pretty amazing stuff, so I’d say this is a justified response.’

Another said: ‘Yeah eyebrow pomade, and assuming it’s from Beauty Bay it’s probably ABH [Anastasia Beverly Hills] which is about 20 quid a pop, so they are completely justified in their response!’

‘If it was Anastasia Beverley Hills dipbrow then this response is completely warranted in my eyes. That s***’s expensive,’ agreed a third.