The BBC has faced criticism from women’s rights campaigners after claiming that one in ten ‘people who are assigned female at birth’ suffer with endometriosis.

An online article raising awareness of the condition came under fire for language which critics said ‘obscured data on this already misunderstood and overlooked women’s health issue.’

The backlash was led by bestselling pregnancy author Milli Hill on Twitter, and after ‘hundreds’ of complaints the article has been changed to state that endometriosis is a ‘condition that affects one in 10 women of any age in the UK’.

Milli, from Somerset, faced a furious backlash in 2020 after challenging the use of the term ‘birthing people’ while speaking about obstetric violence – medical interventions performed during childbirth without a woman’s consent.

Nickie Aiken, Conservative MP for the Cities of London and Westminster, also weighed in, stating she was ‘born with, not assigned’ her gender. 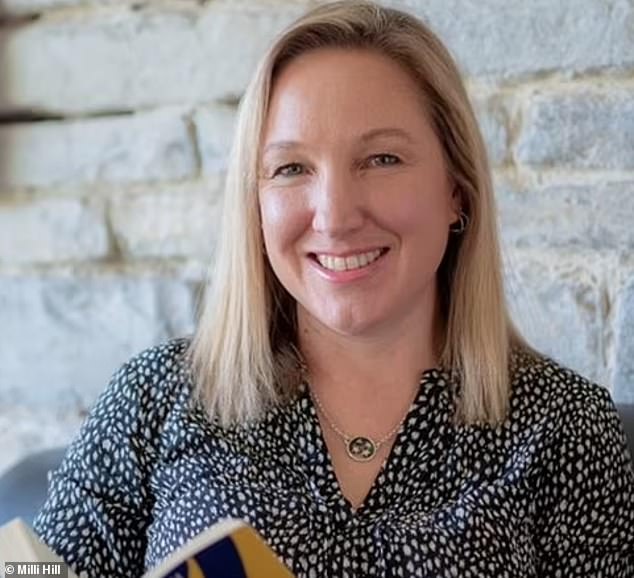 Milli Hill, from Somerset, faced a furious backlash in 2020 after challenging the use of the term while speaking about obstetric violence – medical interventions performed during childbirth without a woman’s consent 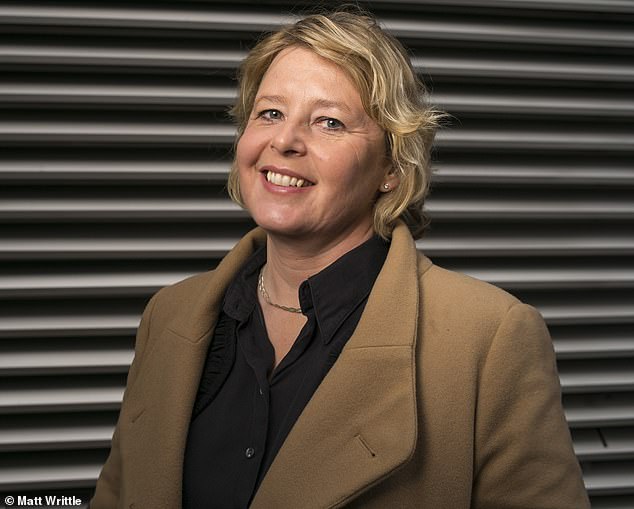 Nickie Aiken, Conservative MP for the Cities of London and Westminster, hit out at the BBC after an article claiming that one in ten ‘people who are assigned female at birth’ suffer with endometriosis 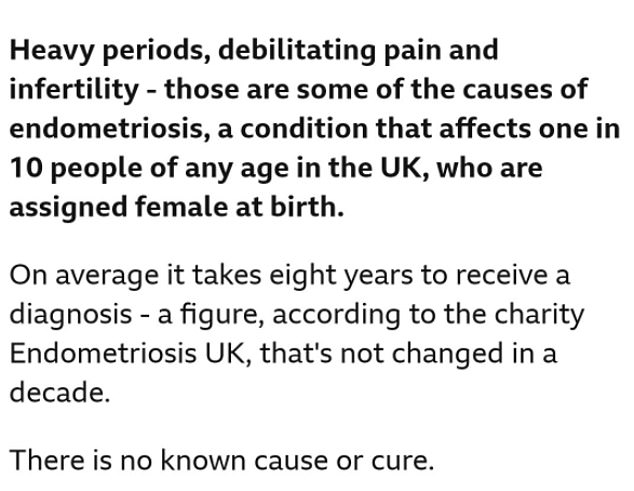 An article raising awareness of the condition came under fire for claiming that one in ten ‘people who are assigned female at birth’ suffer with endometriosis. It has since been changed.

She wrote: ‘Like 51% of the UK population I was born not assigned a woman at birth. And after circa 500 periods, two pregnancies and labours and now the menopause, I can confirm it ain’t no picnic. So I can’t imagine what it is like to live with #endometriosis as well.’

Prior to being changed, the BBC article stated: ‘On average it takes eight years to receive a diagnosis – a figure, according to the charity Endometriosis UK, that’s not changed in a decade.  There is no known cause or cure.’

Pregnancy campaigner and bestselling author Hill argued that endometriosis is a condition for which there is no cure, ‘because this is an issue that only affects women’.

Sharing a screenshot of the original article, she wrote: ‘Sex is not ‘assigned at birth’. Saying ‘1 in 10 people’ obscures the stat. Also, the reason there is ‘no known cause or cure’ is undoubtedly because this is an issue that only affects women, and has been consistently overlooked.’

Pregnancy campaigner and bestselling author Hill argued that endometriosis is a condition for which there is no cure, ‘because this is an issue that only affects women’

The backlash was led by women’s rights campaigner Milli Hill, who says ‘hundreds’ of complaints led to the article being changed

After sharing screenshots of the updated article, she later added: Before I switch off for the day can I just say that it wasn’t me who “made” the BBC change their language.

‘It was the hundreds of women who got in touch with them who agreed the article obscured data on this already misunderstood and overlooked women’s health issue.’

Twitter users were quick to share their opinions, with many suggesting that the phrasing be changed to include both ‘women and transmen’ and begrudging the fact that ‘woman has become a dirty word’. 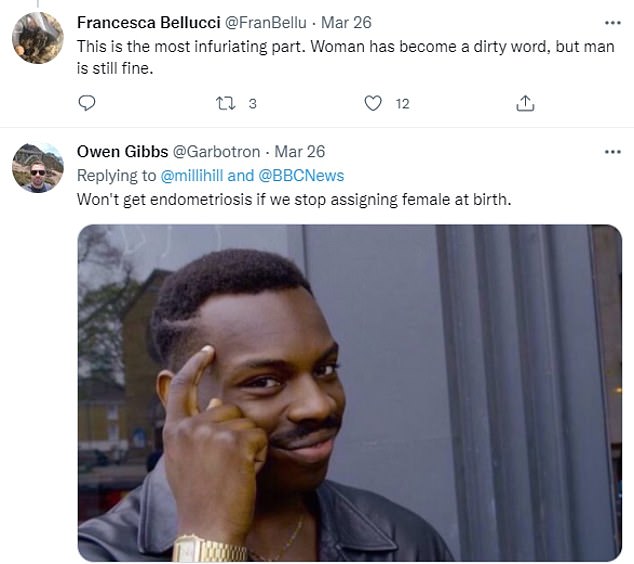 Twitter users were quick to share their opinions, with many suggesting that the phrasing be changed to include both ‘women and transmen’ and begrudging the fact that ‘woman has become a dirty word’

‘I don’t understand why they can’t just say ‘women and transmen’? That doesn’t sideline anyone and cuts out this ‘assigned at birth’ bull that makes it sound as if the fairies decide based on some kind of ethereal quota. Plus, it’s shorter’, wrote one.

Endometriosis: What is it, what are the symptoms and how can it be treated?

Endometriosis is a condition where tissue that covers the inside of the uterus, the endometrium, appears in other parts of the body and causes chronic inflammation, scarring and pelvic pain.

The endometriosis tissue outside the uterus will bleed just as it would as the lining of the uterus. According to womenshealth.gov ‘this can cause swelling and pain because the tissue grows and bleeds in an area where it cannot easily get out of your body’.

According to the NHS, it can appear in many different places ‘including the ovaries, Fallopian tubes’. Endometriosis tissue can also appear inside the stomach, in or around the bowel and the bladder.

The condition usually affects girls and women of childbearing age and is less likely to affect women who have had menopause. Endometriosis is more common in women in their 30s and 40s.

The condition affects 6-10 percent of the general female population in the US, according to a scientific paper published in the Journal of Assisted Reproduction and Genetics.

Endometriosis UK says that one in ten — around 3million — women of reproductive age in the UK have the condition.

There is no known cause of endometriosis, although one theory posits that family genetics plays a large part.

Other potential causes explored are immune system issues and complications from menstrual period flow, whereby the tissue shed during the period ends up flowing through the Fallopian tube to other parts of the body such as the pelvis.

Main endometriosis symptoms include chronic pelvic, lower back and abdominal pain that may be worse than normal during a period; experiencing pain during sexual intercourse, painful bowel movements; bloating and nausea.

Painful periods and difficulty getting pregnant are other key symptoms. Experiencing heavy periods and infertility are noted as being symptomatic of endometriosis.

The NHS recommends seeing a GP when symptoms manifest, in particular if they are ‘having a big impact on your life’.

The doctor will conduct a pelvic exam and may perform an ultrasound, however, a laparoscopy is currently the only way to confirm an endometriosis diagnosis.

A laparoscopy is a procedure that involves the doctor making a small incision in the skin and passing a small tube through it to see if there are any patches of endometriosis tissue.

There is no cure for endometriosis. However, the NHS offers treatments that can palliate the symptoms.

These include painkillers such as paracetamol, hormone medicines and contraceptives like the pill, the contraceptive patch and an IUS. Surgery to cut out the endometriosis tissue or parts of the organ affected are also options.

However, the NHS says that sometimes doctors may not start treatment immediately in order to see if the symptoms improve on their own.

Another said: ‘Over 10 years ago I was diagnosed with PCOS, gynaecologist thinks I might actually have endometriosis, my symptoms certainly fit more with endo. Also my sex was not ‘assigned to me’.

‘This is the most infuriating part. Woman has become a dirty word, but man is still fine’, wrote a third.

Milli is a journalist and advocate of women’s rights in childbirth who penned bestselling pregnancy guide The Positive Birth Book and Give Birth Like a Feminist.

She hit the headlines earlier this year when she revealed she was targeted on social media, faced calls for her books to be boycotted and was dropped by a charity she’d worked alongside for years due to her comments about the term ‘birthing people’.

She was called out by a stranger on Instagram last November, who wrote: ‘Birthing people are seen as “the fragile sex’ who need to be kept under patriarchal authority by doctors.’

Hill replied: ‘I would challenge the term “birthing person” in this context though. It is women who are seen as the “fragile sex” etc, and obstetric violence [medical interventions performed during childbirth without a woman’s consent] is violence against women.’

In 2012, Milli founded the Positive Birth Movement, a network of support groups for pregnant women, while her work for the last decade as a journalist and author has featured heavily around women’s reproductive lives.

On her blog, she explains that around three years ago, she noted a changed in language around childbirth, particularly the two phrases ‘birthing people’ – which was used alongside or instead of “women”, and ‘assigned male/female at birth’.

She says she found the latter ‘confusing’ because the sex of babies is more often than not determined in prenatal tests and scans, rather than birth, while the word ‘assigned’ implies something is given to you, not innate – like biological sex is.

Milli, who used to be a creative psychotherapist and worked with young people post abuse and trauma, continued: ‘My work and thinking around obstetric violence had led me to the view that it is “sex based violence.” Please note my use of the word sex here, not gender….

‘What I saw happening in this slide was a genuine mix up between the absolutely correct idea that the problem here is patriarchy, a system that oppresses and damages women on the basis of their sex, and obfuscating terminology that is unable to name the oppressed people.’

After being tagged in the comment online, Milli went on to say she felt the need to speak out and so responded to the account which had few followers – adding she just felt ‘moved to say what she thought.’

However, a doula posted screenshots of her comments on her stories and ‘all hell broke loose.’

Shortly after, Milli was contacted by Amy Gibbs, the chief executive of Birthrights, a charity that campaigns for human rights during childbirth.

Milli, who closed The Positive Birth Movement in 2021 in part due to the bullying she’s experienced, had worked with the organisation for a number of years.

Amy wrote that she was ‘really concerned’ to see the comments made by Milli about obstetric violence, adding these were ‘challenging/disputing that it could happen to non-binary or trans people who give birth’.