In the fictional world of Gotham City, it is Batman's name that sits above the titles. But in the shadows, doing much of the legwork, is his butler, Alfred Pennyworth.

Depending on which Batman you grew up with, the various Alfreds were quite different: genteel Alan Napier in the 1960s Batman series, Michael Gough in the Tim Burton/Joel Schumacher Batman film series and young, fit Sean Pertwee in Gotham.

Christopher Nolan's Dark Knight trilogy gave Alfred, played by Michael Caine, a broader backstory: he was a former soldier in the elite SAS of the British army who became the legal guardian of young Bruce Wayne – the future Batman – after his parents, Thomas and Martha Wayne, were murdered. 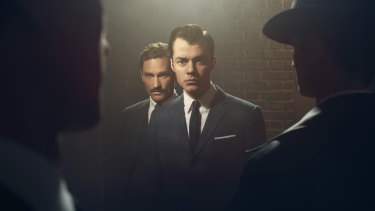 Ben Aldridge as Thomas Wayne and Jack Bannon as Alfred Pennyworth in Pennyworth.Credit:Epix

Now, in a perhaps unsurprising turn for a television genre hungry for reboots, rebirths and origin stories, it is Alfred, not Batman, who will become the centre of the story. Pennyworth, from Gotham producers Bruno Heller and Danny Cannon, is an origin story for the venerable butler, reshaped here in the Caine template: a soldier in the SAS who is, when we meet him, living in 1960s London and newly acquainted with Thomas Wayne.

In Pennyworth, Alfred Pennyworth is no mere sidekick, Heller says.

"In that last iteration of the Batman myth he's a sidekick, [but] in his own life he's not a sidekick and that's one of those fascinating things about taking a story from a different angle," Heller says. "It's a bit like Rosencrantz and Guildenstern Are Dead, you know? It gives you [a chance to look at] the elephant from another angle."

It's the peculiar quality of comic book universes, Heller adds, that means characters such as Alfred can be given their moment on the main stage. "It's like Godfather III isn't it? That's the wonderful thing about the DC Universe and the Gotham universe, in general. It is kind of infinitely expansive. Every few years you discover a new way to look at it."

Cannon, who serves as co-producer and director on the series, compares the genre to old-school westerns. "There is something about the DC Universe where you can tell stories that maybe have been told before, but they always seem different in that universe," he says. "As long as the world you create seems real and is relevant, it's like westerns. In that environment … the stories play better."

Being set in the '60s, Pennyworth frames the character roughly within the timeline set by the Dark Knight films. It was a specific choice by Heller and Cannon, particularly when you consider the original Batman comic books, as written by Bob Kane, were set in the 1930s.

"We're both British, we're both from London, and I don't think there's a better period in London than the early 1960s," Cannon says. "It's after the war, before things change for good, [but] you could see the change in the air. Things were happening culturally, artistically – it was an inspiring time, I think, that English people always revisit. That was the foundation we started with and then we made it 13 degrees more DC, 13 degrees darker, and it really came alive for us."

The character's origin story, as framed by Pennyworth, also owes its greatest debt to Caine's on-screen performance as a battle-weary soldier, whose tones were also used in Pertwee's characterisation for Gotham, Heller says.

"It's really the chance to make him the centre of a story and explain that journey: how did he get from being a young SAS soldier to being a butler in America?" he says. "It also gives us a chance to create a real world around him, a world in England that fits the whole DC universe. It's surprising to all of us the depth and range that you can go to with this character."

In a sense, Heller adds, Alfred's story is one of coming to terms with one's destiny.

"He's a young man whose father was a butler, and his father wanted him to be a butler, and it's the last thing that Alfred wants to be," Heller says. "This is a journey of someone discovering that everyone has to serve someone somehow."

That we know essentially how the story ends – in Gotham City, at Wayne Manor and in the Batcave – does not diminish the journey, says Cannon.

"It's as much a story about how the world is different back then, and how the world will change in order to create what comes after it," he says. "Why does he go to America? Why does he end up in Gotham? Why does he serve Thomas Wayne the way he does? Why will he be a good mentor to the greatest hero of all time?"