At just 25 years old, tennis champion Ash Barty seemingly had the world ahead of her when it came to her stellar on-court performances. But when the world number one announced her shock retirement earlier this week it spoke to a growing change in workplace culture. 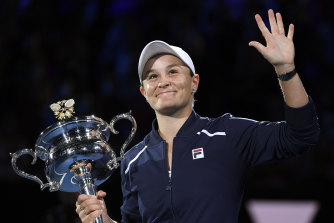 Barty: “It’s hard to say, but I’m so happy and I’m so ready and I just know at the moment in my heart, for me as a person, this is right.” Credit:AP

Instead of leaving after burnout, a toxic environment or waiting to hit the age of retirement, Barty’s decision raises questions around what a career could look like if we left on our own terms, and if the era of years in service equates to success is dead.

Explaining her decision on Wednesday, Barty said, “It’s hard to say, but I’m so happy and I’m so ready and I just know at the moment in my heart, for me as a person, this is right.”

She continued, “It’s given me all of my dreams, plus more, but I know that the time is right now for me to step away and chase other dreams and to put the racquets down.”

Dr Kirstin Ferguson, a leadership expert and company director, says the decision marks the kind of career reassessment so many Australians have experienced since the pandemic hit.

“People want to work in a meaningful way and in a way that is adding more than just dollars to their bank account,” Ferguson says, describing the move as a “realignment” of values both personally and professionally.

“A lot of people – particularly Millennials and Gen Zers – are now looking at their careers and asking big questions. If you’re being paid well but your company’s values don’t align with your own, is that really success? Or if you’ve achieved the promotion you want but are working in a toxic workplace, is that success?

“COVID has allowed a lot of us to think about redefining what success means to us, and in Ash Barty’s case, that clearly means prioritising her happiness and time to reconnect with her family over a large salary and travelling much of the year. And while her case is an extreme one given she has the financial means to retire at 25, I think a lot of people can relate to what she is searching for,” Ferguson says.

For Leah Lambart, a career coach and Director of Relaunch Me, the trend is strongest amongst Millennials and Gen Z workers.

“A high salary doesn’t make up for doing work that isn’t fulfilling. Instead of staying in a job for money, employees are looking to do work such as helping people or contributing to society in a positive way.”

“COVID has allowed a lot of us to think about redefining what success means to us.”

Even without Barty’s level of financial safety, Lambart says big change is still possible and recommends considering what type of work energises you and what will benefit your personality type. Introverts, for example, are likely to find customer-facing roles like hospitality or retail extremely taxing but could thrive in settings like IT or design.

“You definitely want to be doing your research and mapping out a bit of a plan before you call it quits. Recruitment processes can be quite slow and we keep hearing that it’s a candidate’s market at the moment, but that’s not across all industries and good jobs are still competitive.”

Lambart also says, “Success used to be that you stayed in the same job for 50 years and you got the gold watch, but these days it’s actually a negative to spend too long in the one company,” and recommends people move on from an employer every seven to ten years.

For Ferguson, it also comes down to a shift in long-term work culture and people recognising that metrics of success change and goals evolve with time.

“The old model of hustle culture of doing whatever it takes to climb the ladder is not as appealing as it once was. You still need to put in the work and there will be hard times but I think Ash Barty’s choices will help people realise that if you feel as if you’ve achieved what you set out to, it’s OK to step back and think about what’s next.”

“Priorities change over a lifetime of a career. That’s why you need to be self-aware because you could be in the same job for 30 years and suddenly wonder what it’s all for,” Ferguson says.