Melbourne Theatre Company will get a $5 million cash rescue package from the federal government, after being forced to cancel yet another expensive production due to the city’s continuing pandemic restrictions.

Executive director Virginia Lovett said that, while the company had not been on the verge of insolvency, it had been forced to draw down on its reserves to the extent that, without help, it would have “severely compromised” their artistic options for years, led to hard choices over staffing, and left a very small margin to weather future blows. 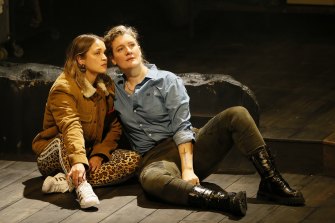 Melbourne Theatre Company’s 2021 production of Cyrano only got three previews in before lockdown.Credit:Jeff Busby

“We have been in a dire situation,” she said. “It’s like being caught in a rip and you’ve been thrown a lifeline.”

The company went into the pandemic with one of the healthiest balance sheets in Australian theatre. But it relies on box office for most of its income and has already cancelled 168 performances this year. It is projecting a box office loss of $6 million for 2021, on top of over $13 million last year.

“Every show has been impacted by the lockdowns or capacity restrictions or border closures – we just have not escaped,” Ms Lovett said. “The velocity and frequency of these lockdowns has been pretty brutal.”

Federal Arts Minister Paul Fletcher said in a statement it was important the arts and entertainment sector was “primed to restart”.

“No performances means no revenue – and that in turn meant MTC’s sustainability was at risk,” he said.

The grant comes from a fund set aside for last-resort cash lifelines to significant Australian government-funded arts organisations that are assessed to be at “imminent risk” as a direct result of COVID-19.

More than half of the $50 million fund has now been used, with recipients including Opera Australia ($10 million), Sydney Theatre Company ($2 million), Sydney’s Museum of Contemporary Art ($2 million), the Melbourne Symphony Orchestra ($3 million), Circus Oz ($400,000) and The Wheeler Centre ($500,000).

Ms Lovett said they tried “absolutely everything” to save the show.

Actors Nikki Shiels and Matt Day flew from Sydney to Melbourne via two weeks in Howard Springs, and took part in a month of Zoom rehearsals. On social media Day said he was sad and angry it had all been in vain.

However, the state government refused repeated requests for an exemption from lockdown rules to rehearse the show, Ms Lovett said.

Earlier this month the company announced its production of Cyrano, forced offstage when the latest lockdown was announced on what was to be its opening night, would not return in 2021.

They still hope to stage their last planned 2021 show, the Shakespeare comedy As You Like It, scheduled to open in mid-November. The company is in talks with the state government trying to secure permission to begin rehearsals at the end of this month.

“I do hope vaccination rates are at a level that gives the government confidence to give us that exemption,” Ms Lovett said.

MTC’s 2022 season, the last from outgoing artistic director Brett Sheehy, will be announced on September 29.