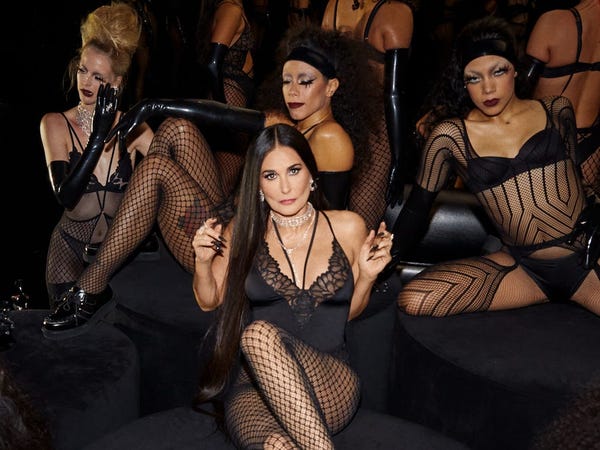 From supermodels and drag queens to movie stars and reality TV favorites, the celebrities were out in full force at Rihanna's Fenty X Savage fashion show — which is currently streaming on Amazon Prime.

While some — like Cara Delevingne and Bella Hadid — were returning to Rihanna's runway for the second time, others like Lizzo, Demi Moore, and Paris Hilton made their debut appearance for the lingerie line.

And while they all dominate different parts of Hollywood, these stars all had one thing in common: how much they love working with Rihanna. 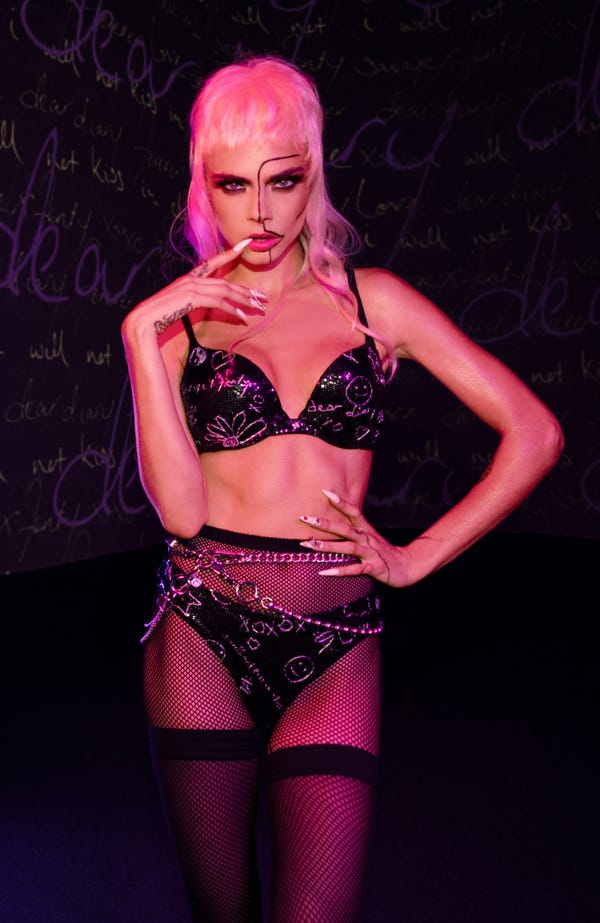 Delevingne was among the stars who gave on-camera interviews that were included during Rihanna's show.

"As a child I was definitely a bit of an alien," Delevingne said during the "Dear Diary" segment. "Or a bit of a creature. I just felt very feral."

Delevingne also called Rihanna's show a "masterpiece" in an Amazon Prime interview that was shared with Insider. She said that collaborating with the fashion icon "never feels like work."

"It's just a chance to hang out or take a brief trip inside her wonderful brain," Delevingne added.

Rosalía was one of the first singers to perform during Rihanna's fashion show. 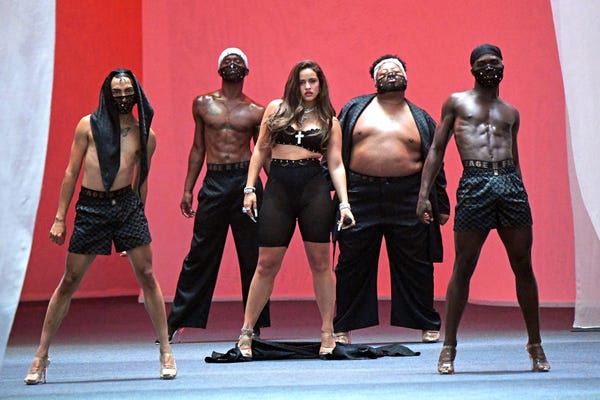 Rosalía said she was "so excited" that Rihanna counted on her to sing on the runway.

The singer added that she loved how Rihanna's lingerie line is "so inclusive."

"I think Savage is something that makes me feel like, wow, I can feel so powerful," Rosalía said. "Savage is all types of bodies, all types of shapes."

Demi Moore, who also appeared in the show's "Dear Diary" segment, said she was shocked that she was asked to be a part of Rihanna's show. 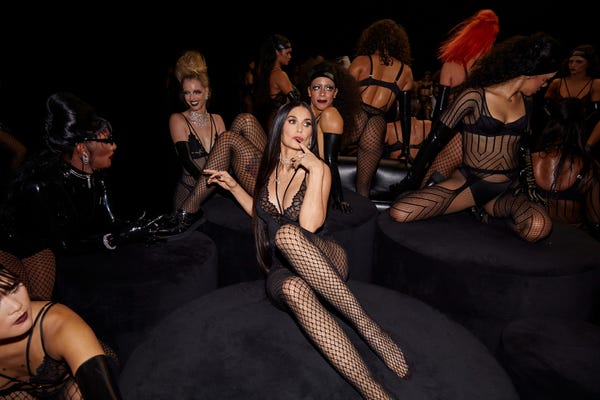 "I was thrilled," she said during the Amazon interview. "I made huge points with my daughters. It was such an unexpected, wonderful call to receive."

Moore admitted that she was "a little bit nervous" during the rehearsal.

"You know, I am a lot older than everybody else involved," she said. "But I'll tell you, the most incredible thing was the open outpouring of love and support from everyone, but especially all the women.

Moore credited that feeling of inclusion to "the messaging that Rihanna's been wanting to bring forward."

"It's not something that's just an advertising move," she said. "It really feels like it's in the DNA — not just of the line, but the whole experience."

Bella Hadid returned to Rihanna's runway with latex stockings and gloves, plus a diamond belly chain. 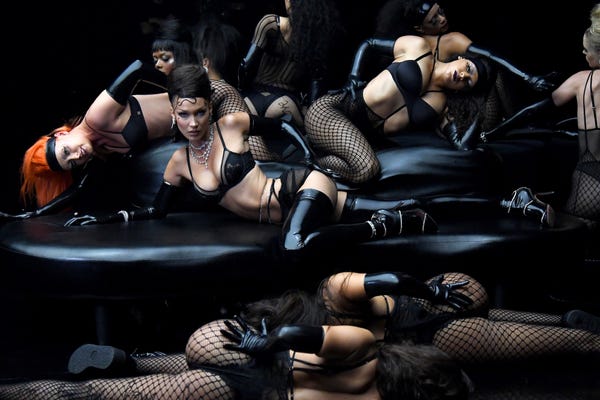 Hadid has been a vocal supporter of Rihanna's lingerie line, revealing last year that the Savage X Fenty show was the first time she felt "powerful" while modeling lingerie.

"For me, that was the first time on a runway that I felt really sexy," Hadid said during the Vogue Fashion Festival in Paris. "Because when I first did Fenty, I was doing other lingerie shows and I never felt powerful on a runway, like, in my underwear."

Jaida Essence Hall, who won the most recent season of "RuPaul's Drag Race," said it was an honor to appear alongside Moore and so many other incredible women. 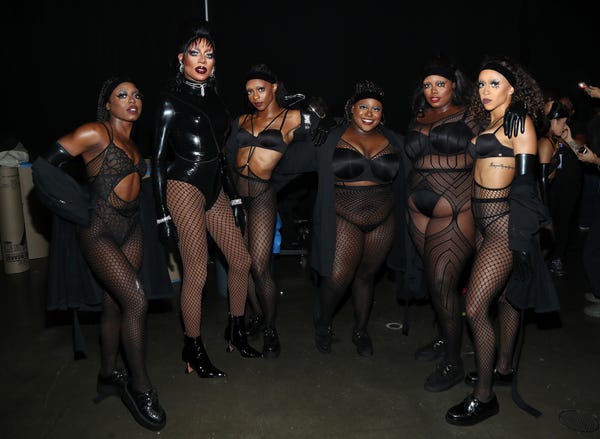 "In the show, I have the pleasure of being celebrated by beautiful dancers, models, and Demi Moore — a sex icon and goddess," Hall said during the Amazon interview. "And I get to walk in the show with some incredible women, and I'm proud of that."

While she was a dancer for the 2019 show, Normani said she was happy that she got to walk the runway for Rihanna this year. 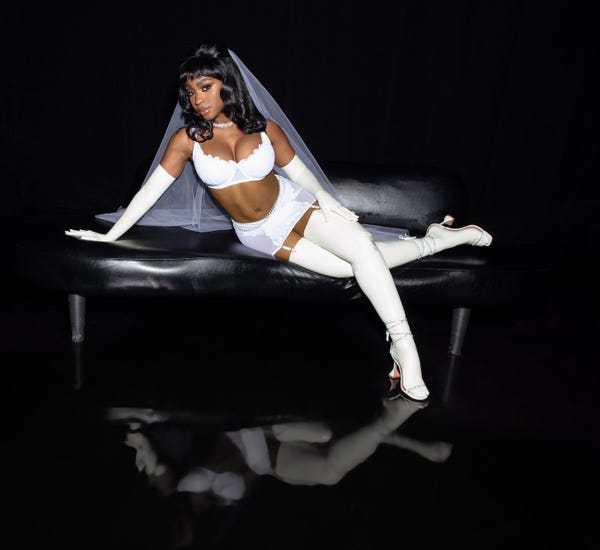 "Being a part of this show, I feel like I'm embracing my sexuality in a different way than I've ever been able to before," Normani said during her Amazon interview. 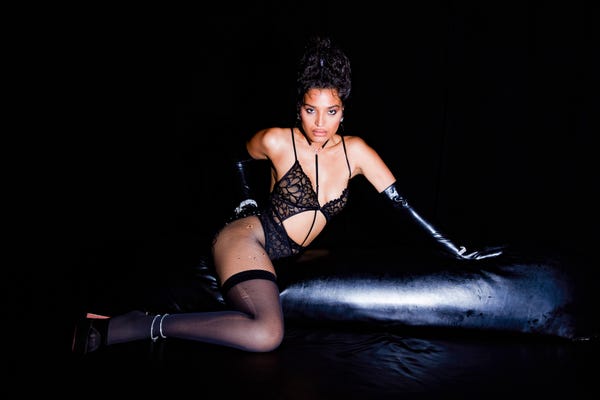 "I'm excited to watch Black women be beautiful," Moore said during the Amazon interview. "And I feel like Rihanna is giving us that."

Lizzo may be new to Rihanna's show, but she didn't shy away from the spotlight during her special dance solo. 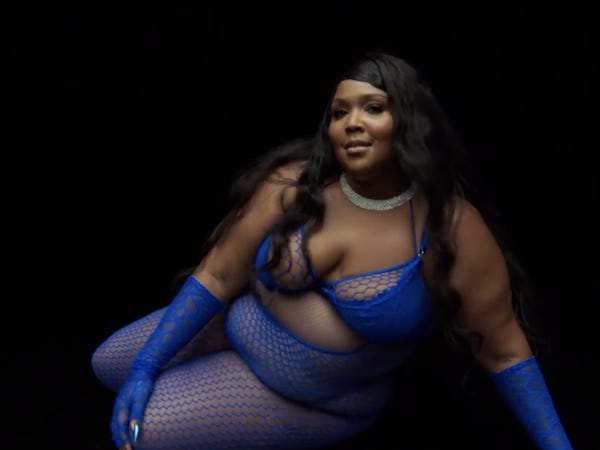 Lizzo danced to D'Angelo's "Brown Sugar" in front of a mirror while wearing an electric blue lingerie set from Rihanna's line.

She later took to Instagram to celebrate her cameo, writing in the caption: "Just when you thought I couldn't love myself any more."

It wouldn't be a Fenty show without Rihanna herself, who made her first appearance midway through the show. 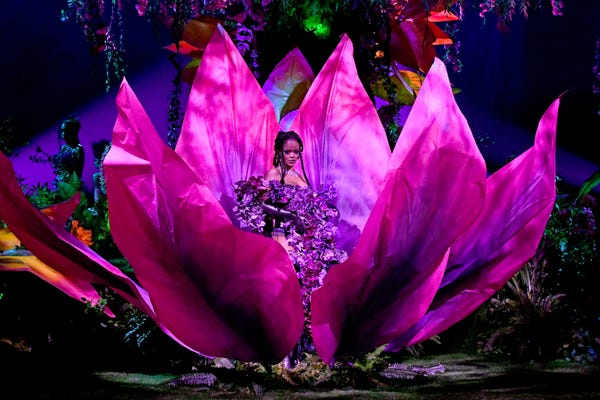 The fashion icon emerged from a blooming flower during her "Garden of Eden" segment wearing a lilac teddy and a stunning cape covered in flowers. 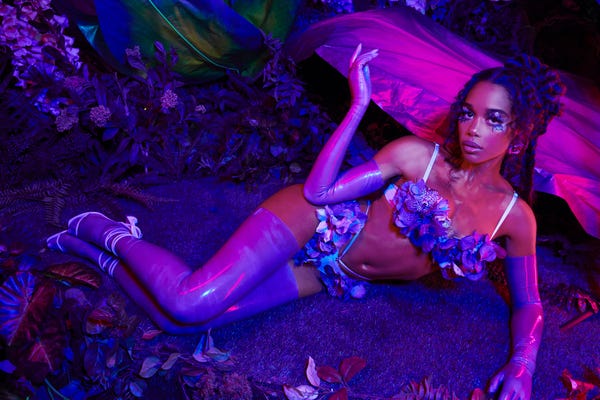 She matched Rihanna's garden backdrop perfectly in a lilac lingerie set that was covered in purple flowers, which she paired with latex gloves.

Paloma Elsesser was among the models who returned to Rihanna's runway this year. 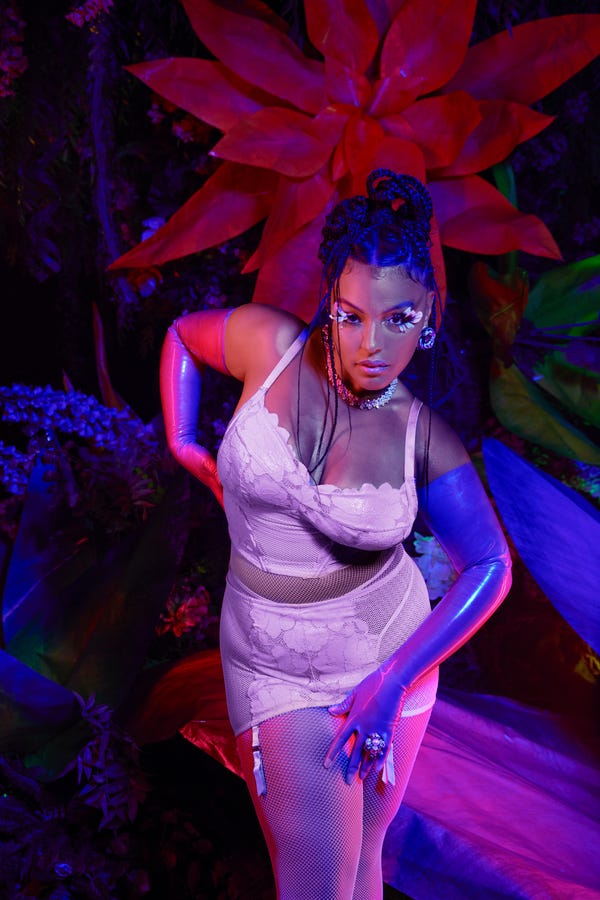 "Sexuality is inherently powerful," Elsesser said in an interview included during Rihanna's show. "It's kind of been co-opted into a performance for someone else, but sexuality is so deeply each of our own." 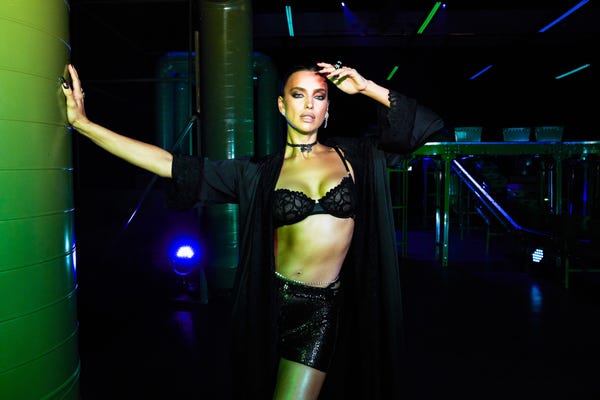 During her Amazon interview, Shayk said she loved that the Fenty show was "all about inclusivity."

"It's all about majorness and no barriers in this show," she added.

Paris Hilton has been making headlines for her surprise cameo on Rihanna's runway. 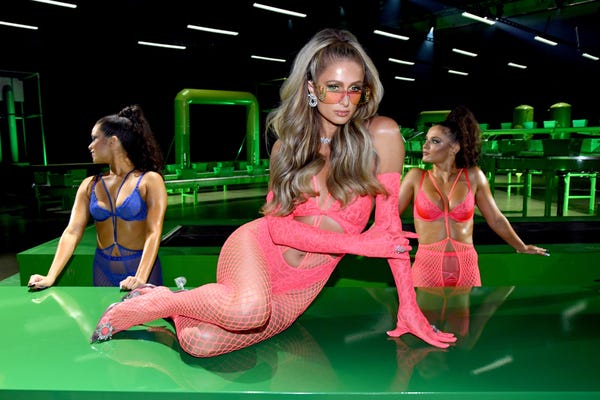 Hilton, who appears towards the end of Rihanna's show wearing hot-pink from head to toe, praised the designer's vision during her interview with Amazon.

"What I love about this show is that everybody is beautiful, everybody is sexy," she said. "It's celebrating everyone, and I think that's incredible."

Hilton was joined by fellow reality TV star Erika Jayne, who also made her Fenty debut. 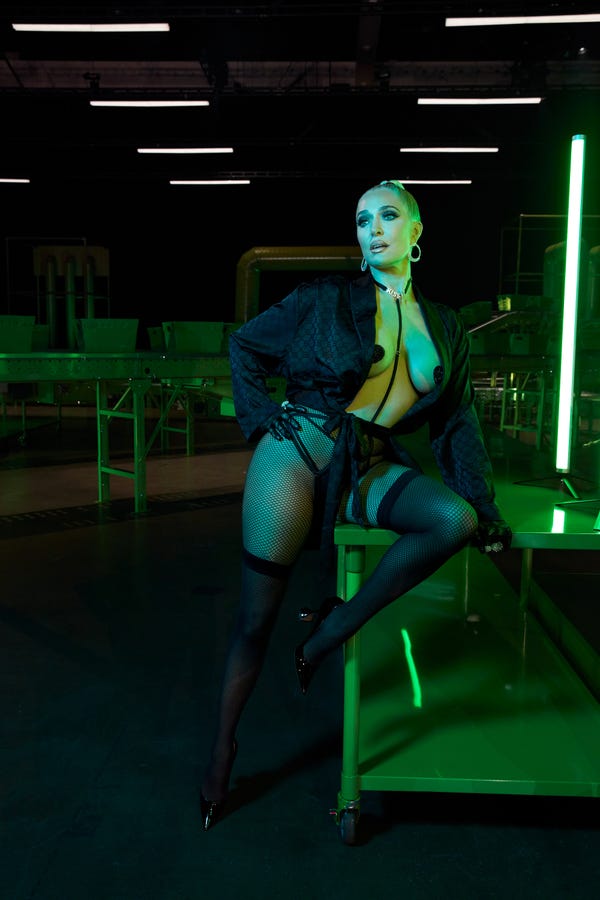 Jayne said she was shocked when her agent told her that she'd been invited to appear in Rihanna's show.

"To be 49 and in a lingerie show, I just feel so excited and honored," the "Real Housewives of Beverly Hills" star said during her Amazon interview.

Jayne called Rihanna a "global artist," who "accepts everyone."

"I feel like Rihanna's one of those special women that come along once in a lifetime, that change the game," she added.

Christian Combs made his return to Rihanna's runway, this time as both a model and a brand ambassador. 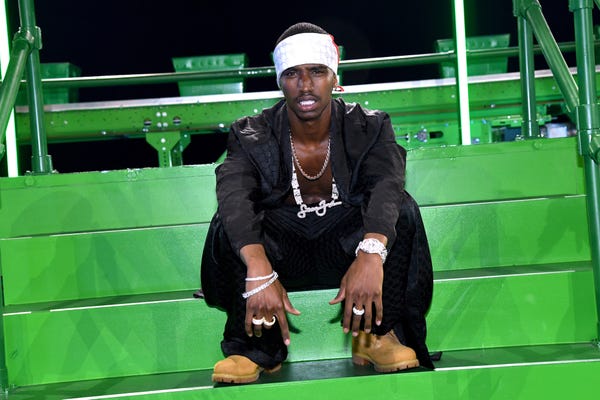 Rihanna collaborated with Combs, who is the son of P. Diddy, on her line's new boxer shorts and boxer briefs collection.

"For her to choose me as the face and design with her, it's everything," Combs said during his Amazon interview. "Being able to collaborate with her in the position she's in and what she stands for, and knowing she's a Black woman in the fashion industry, it's just an honor to be here."

Combs added that "being a Black man in America" is what makes him feel "savage, sexy, confident, and powerful."

"And seeing all my Black queens and being able to be involved with them in a great fashion show like this," he said. "That's one thing I really love about Rihanna, she doesn't discriminate."

Willow Smith, who made her Fenty debut this year, said she felt honored to be part of Rihanna's vision. 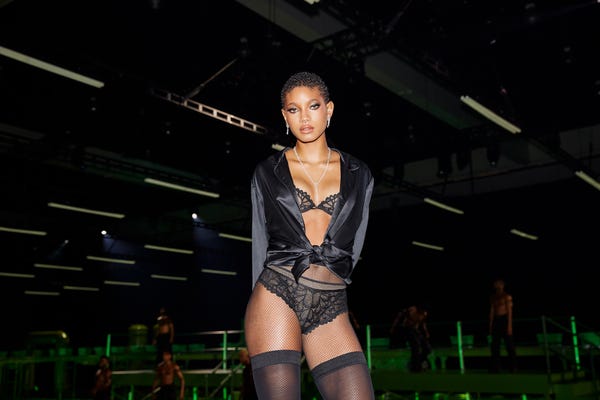 "She's a boss," Smith said during her Amazon interview. "Seeing everything she's designed and this beautiful production, it inspires me and makes me feel that sense of worthiness to be a part of this." 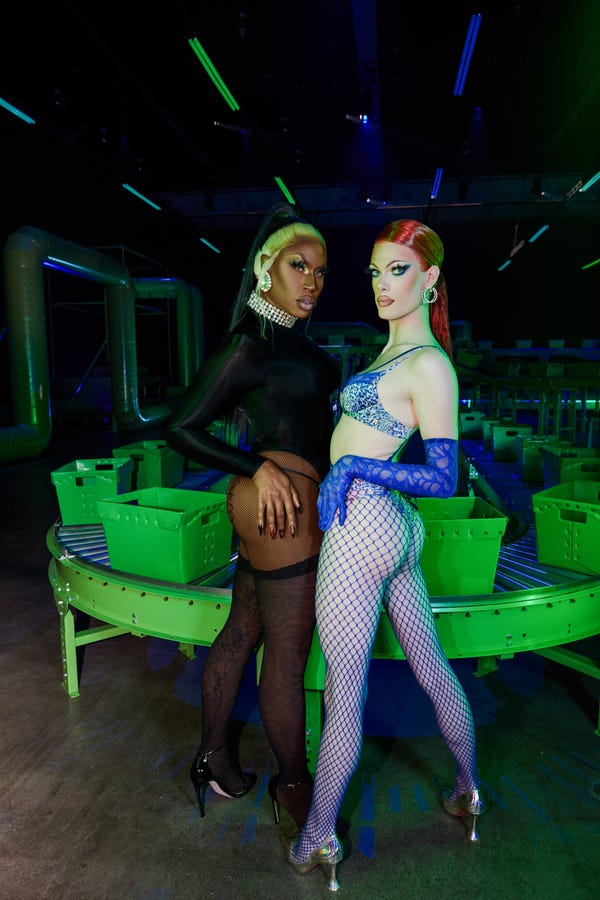 "It has been just so inspirational for me as a person being a part of it, so I can only imagine how inspirational and encouraging it will be to everyone out there watching all these different representations of people," Couleé said during the Amazon interview.

"To be able to be a drag queen and wear these feminine pieces you can just go to the store and pick up is so liberating," Goode added.

Rico Nasty said Rihanna is helping "us remember how beautiful we are" through her show. 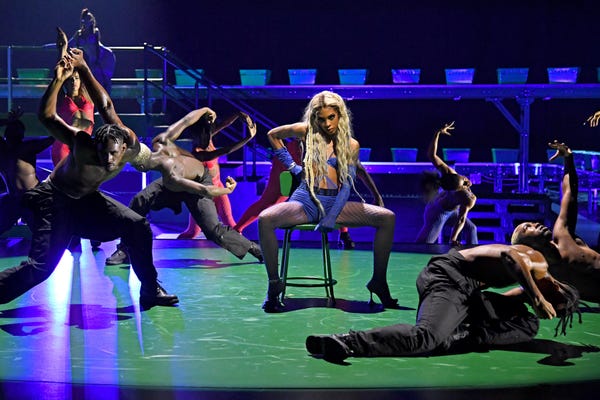 "I feel like she does this with every fashion show," the rapper added. "We've been in the house all year and she's trying to give us some sexy a– loungewear, I'm here for it!"