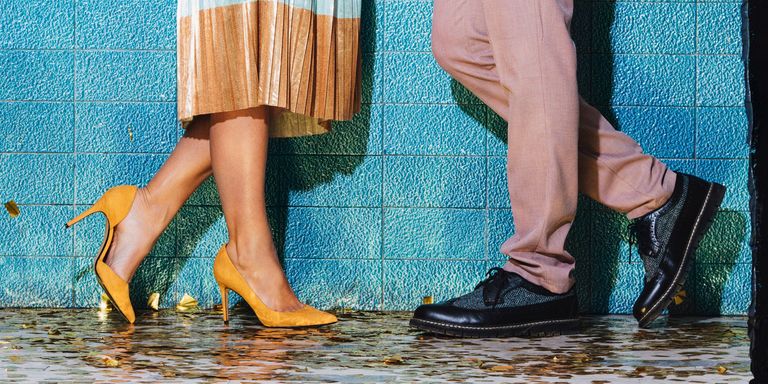 He yelled, “I thought you were going to bite my tongue off!”

After my first prom, my date — who was my boyfriend at the time — and I went back to my friend’s house. I think there was this unspoken vibe between us that we were going to have sex for the first time, but I got really nervous so I drank a bit, and smoked a ton of pot. My boyfriend was dead sober. We snuck away from the party and started making out in my friend’s living room. I was apparently really out of it at this point, and started biting his tongue so hard and for so long that I didn’t notice until he had to push me off him because his tongue was bleeding. He literally yelled, “Oh my god, I thought you were going to bite my tongue off!” — Gianna, 21, Providence, RI

“All of a sudden, he felt what he thought was my hand rubbing his head…”

My sophomore year, I went to junior prom with a guy I wasn’t officially dating yet. We were making out at our dinner table while everyone was on the dance floor. All of a sudden, he felt what he thought was my hand rubbing his head — and when he realized he was holding both my hands, he turned around and his mom was standing behind him. She was the one rubbing his head. She immediately pulled him out of the prom to yell at him for not inviting her to prom pictures. I was mortified. The principal of the school even came up to me to ask if I was okay because I looked so flustered. It was horrific. —Fiona, 24, New York, NY

“I ended up sneaking downstairs and hooked up with his best friend.”

One of my really good guy friends asked me to our senior prom. I was excited at first, but he started to throw me some awkward signals that he wanted to hook up with me, and I didn’t want to hook up with him. I tried to ignore it, but I had to swerve his attempts several times.

My friend group had rented a prom house to party in afterwards and we were expected to share beds with our dates. After drinking a lot and waiting for my date to finally pass out, I ended up sneaking downstairs and hooked up with his best friend. Worst part: at one point my date got up and creepily searched the entire house for me. When he passed by us I had to hide under the covers while his best friend pretended to be asleep. —Lindsey, 22, Guilford, CT

“My boyfriend flipped around to cover me, totally exposing himself.”

A few months before my senior prom, my high school boyfriend and I started having sex, so of course we were all over each other all the time. We went to a prom afterparty at our friend’s house. Everyone was in the basement and when people started drinking and eating edibles, we snuck off to hook-up. We went into our friend’s home gym, started going at it, totally naked — we figured everyone would be partying for a while and the door was closed. Except suddenly, [a partygoer] opened the door really wide and all the light from the party streamed in. My boyfriend flipped around to cover me, totally exposing himself. Our friend was so stoned, he just stood there starring for like 15 seconds before closing the door silently, leaving us alone. So we got back to it. —Erin, 23, New York, NY

“I was trying to put my clothes back on in front of everyone.”

I was hooking up with my prom date in the backyard of the house we were partying at after the dance and the cops showed up. We were hooking up on one of those swing-sets people have, on the platform on top. The platform was exposed. Naturally, everyone ran outside to get away so they didn’t get caught by the police, but here I was, trying to put my clothes back on in front of everyone. —Kelsey, 22, Denver, CO

“We ended up hooking up in his hot tub, but never managed to get undressed.”

After prom, my date and I went back to his house — just the two of us. We somehow ended up hooking up in his hot tub, but never managed to get fully undressed. The next day I came home in wet clothes and my parents took my phone away for not coming home the night before. [And then] my dad decided to read my texts. He saw every one about our hot tub hookup. I was mortified, and soon grounded. —Lexey, 22, Niskayuna, NY

“My prom date was banned from the prom, but turned up regardless.”

My prom date in high school was banned from the prom, but he showed up regardless. He was outside the front door smoking, and we found a window in which to kiss through. Getting dressed up, arriving in a limousine, and then kissing a stale smoke-smelling guy through a window was not quite the glamorous night I’d had in mind for my first prom. — Sophie, 28, Leicester, England

“My date made out with one of my friends directly in front of me.”

I brought a friend from another school as my date to junior prom. We went to someone’s house for an afterparty (no alcohol involved) and my date made out with one of my friends directly in front of me. —Jess, 25, New York, NY

I had been hooking up with my prom date since February, and had a huge crush on him. When the dance finally rolled around, we still hadn’t gone to “third base.” My friends all knew and were rooting for it to happen. I got nervous and wimped out the first night at our after-prom house (we had rented it for two nights). The second night, I finally gave him a blowjob and all of my friends started clapping for me when I came out of the room. It was mortifying. Funny thing is, I’m still dating that guy seven years later, so I guess it wasn’t so bad after all! —Olivia, 25, Chicago, IL