While royal commentators noisily fuel the competition between the always appropriate Catherine, Duchess of Cambridge and the luxe Calabasas cool of Meghan, Duchess of Sussex, Princess Beatrice has steadily become a fashion frontrunner with cool choices that almost erase her past sartorial errors.

Flame-haired Beatrice, 33, became the butt of “toilet hat” jokes following her appearance at the wedding of Prince William and Kate in 2011, wearing an excessively original hat by Irish milliner Philip Treacy. But the 10th in line to the throne has emerged from marriage and motherhood with an eye for designer labels that combine youthful flair with the subdued sensuality required for a granddaughter of the Queen. 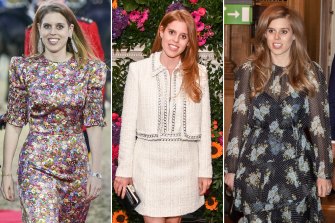 The recent fashion hits of Princess Beatrice of York: Wearing The Vampire’s Wife at Windsor Castle, May 11; Wearing Alice + Olivia at the label’s London store opening on May 26; In Australian label Zimmermann in Sweden, April 27.Credit:Getty

“She used to dress like the boarding school friends I had growing up in England,” says Perth-based Grace Lam, fashion director and former fashion editor of Vogue China. “It was very much that traditional English rose approach, with lots of florals. Very Laura Ashley.”

“She’s come a long way and really moved towards high fashion. Her look is quite sophisticated and now a bit edgy. A lot of it is to do with timing. The ultra-traditional, stuffy royalty look might not suit the current climate.”

When Beatrice stepped out in a green metallic dress from The Vampire’s Wife in 2018 for the wedding of pop singer, Ellie Goulding, it was clear that sartorial change was afoot. The modest gothic glamour of the label, co-founded by Susie Cave, wife of singer Nick Cave, had already attracted the likes of Kirsten Dunst and Kate Moss.

Kate followed suit in a green dress from the label on a tour of Ireland in 2020 and on a visit to Belize in March, wearing a hot pink, metallic silk maxi-dress from The Vampire’s Wife. In May, Beatrice took the trend further in a floral dress from the label at the Royal Windsor Horse Show.

“The great thing is that she continues to do things her way,” Lam says. “The florals are still there, but it’s more grown up. She also loves a statement headband, which is a shift away from the Philip Treacy hat she wore to Prince William’s wedding.”

A statement headband caught the eye through the windows of Buckingham Palace for Trooping the Colour on Thursday with Beatrice watching the Platinum Jubilee festivities inside with Meghan. 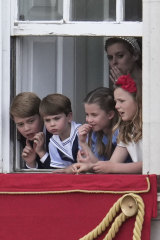 Princess Beatrice in the background wearing one of her signature embellished headbands with Prince George, Princess Charlotte and Prince Louis during Trooping The Colour.Credit:Getty

Teams of seasoned posh professionals have carefully guided Beatrice towards the best dressed lists that her mother Sarah, Duchess of York, remains a stranger to. Former British Vogue stylist Mary Fellowes, Sarah’s second cousin, was originally called on to update the looks of Beatrice and Eugenie in 2012.

“I said to them, ‘If you let me do what I think I should do, I promise you I’ll get you in the Vogue best dressed list by the summer’,” Fellowes told a British newspaper in August. “They were like, ‘No way.’ And I did. I’m very proud of them for that because I think they’d had quite a mixed style journey until then.”

It was when Beatrice began dating her future husband, property developer Edoardo Mapelli Mozzi, that her tastes matured towards labels with cool credentials, with stylists Lady Emily Compton and Olivia Buckingham coming on board in 2019. The grown-up look has helped distance the princess in the media from her father Prince Andrew, who paid an undisclosed sum earlier this year to Virginia Giuffre, who accused him in a US lawsuit of sexually abusing her two decades ago when she was 17. The prince did not admit wrongdoing in the settlement.

Along with her work with the Helen Arkell Dyslexia Charity, Beatrice has gained attention by wearing outfits from Maje, Alaïa, Self-Portrait, Mary Katrantzou and handbags from Gucci. Australian label Zimmermann has also gained royal favour, with the princess wearing a Zimmermann floral dress to announce her engagement in 2019, and another design on a visit to Sweden’s Drottningholm Palace in April.

“Zimmermann suits her,” says Australian stylist Mikey Ayoubi, who has worked with Hilary Swank, Lara Worthington and Jessica Mauboy. “This is something that she has really grow into, wearing them with effortless charm that complements her masculine, boyish features.”

Beatrice was able to maintain her newfound sense of style throughout her recent pregnancy, giving birth to Sienna Elizabeth Mazzopardi Mozzi in September.

“When she wore a polka-dot dress to Wimbledon and wasn’t hiding her belly, she looked great,” Lam says of the belted Self-Portrait dress. “She was celebrating her pregnancy, which was a bit different to the way celebrities might dress because there are still guidelines that royal family has to follow.” (Translation: No exposed Rihanna baby bumps for royalty.)

For Lam, the most important change is that Beatrice is finding her own voice through fashion.

“What is great is the way that she is using her voice through fashion,” Lam says. “There was a strong message of sustainability when she wore her grandmother’s vintage dress for her wedding.”

Beatrice wore a re-worked Norman Hartnell dress loaned from the Queen’s private collection. “She could have asked anyone to design a dress but made this incredible decision. She is also an advocate for eco fashion brands like Veja, Reformation and supporting independent brands too.”