Fashion is all about the next big things, but it’s occasionally important to look back and celebrate style wins, as well as learn from sartorial mistakes. Here’s your cheat sheet for fashion’s biggest moments in 2022, while bracing yourself for what 2023 has to offer.

Almost as underwhelming as florals for spring is finding Kim Kardashian at the centre of this year’s biggest fashion scandal. 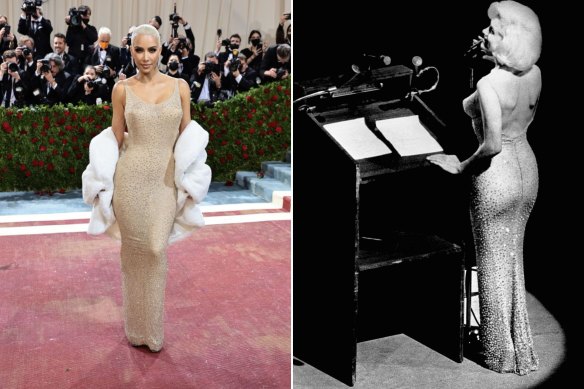 In May at the Met Gala, when Kardashian wore Marilyn Monroe’s Jean Louis gown from 1962 on loan from the Smithsonian Institute, commentators of varying degrees of credibility were outraged. Critics stopped just short of calling Kardashian sacrilegious for donning the legendary actress’s dress, which was the centre of its own controversy 60 years ago when Monroe sang Happy Birthday to her alleged lover President Kennedy. Jackie Kennedy declined to attend.

Most criticism centres around whether Kardashian damaged the dress or should have been permitted to wear a piece of history. Musician Lizzo managed to dodge similar criticism in September when she played a crystal flute that a French craftsman had made for President James Madison in 1813.

Very Peri, the Pantone colour of 2022 and steady rise of Bottega green failed to stifle the spread of hot pink. 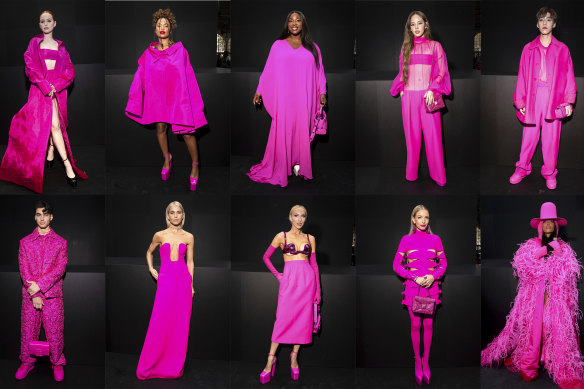 Valentino creative director Pierpaolo Piccioli devoted his entire autumn/winter collection at Paris Fashion Week to a retina-searing pink that made its way onto dresses, suits and accessories.

The trend was given an extra injection with the rise of Barbiecore fashion anticipating Margot Robbie’s starring role in director Greta Gerwig’s movie about the doll.

Rather than fade away, pink continues to play a role in upcoming collections from Christian Dior, Chanel and Carolina Herrera.

“Fashion is always about dopamine,” says Genevieve Smart, creative director of womenswear label Ginger and Smart. “We select fashion based on our mood and how we want people to see us and pink is a highly emotive colour and has always had that ability to take one’s breath away.”

Honourable mention: The power suit is growing in strength thanks to Julia Roberts, Michelle Obama and Cate Blanchett on the red carpet.

With the rise of digital media the attention-grabbing power of covers has diminished, forcing editors to lean into shock value to generate buzz. The tried-and-true pulling power of a Kardashian only worked for Interview in September when Kim donned a jockstrap, but British Vogue managed to take a more sophisticated route” to the top. 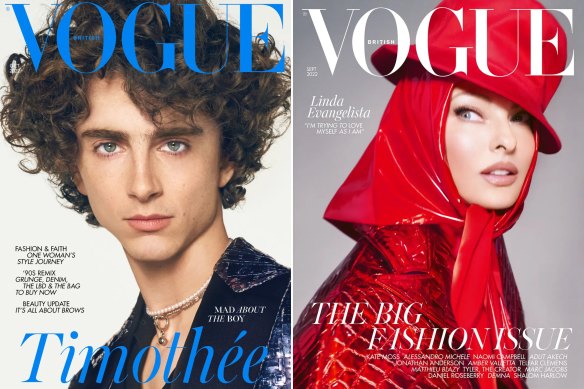 “So a man on the print cover? Perhaps I was waiting for the right man,” said British Vogue editor Edward Enninful. “Certainly I was waiting for us all to evolve a little further, for the moment to feel right, to have it feel like less of a ‘thing’. I wanted it to feel effortless.”

In a year that marked the loss of fashion greats such as Issey Miyake, Thierry Mugler (whose brand is having a super-renaissance, thanks to a slew of Millennial celebrity fans such as Cardi B, Kylie Jenner and, locally, Melissa Leong at the NGV Gala) and Vivienne Westwood, it was the death of Queen Elizabeth that arguably left the greatest dent in the fashion sphere. 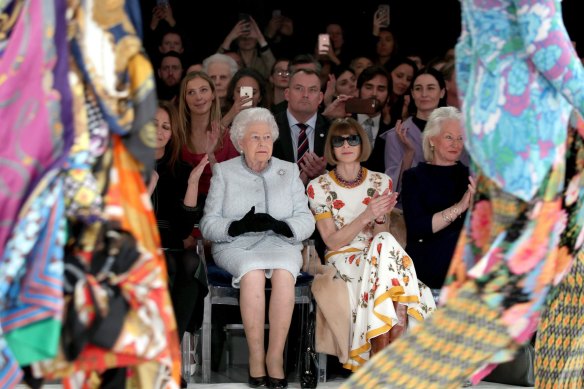 For 70 years, the Queen extolled a dedication to British design, bold colours (a tactic to help her stand out in a crowded photograph) and sustainability. Not one to shout her “green” credentials from the rooftops of Buckingham Palace – she left that to her son, King Charles, before he acceded the throne – Her Maj quietly rewore or upcycled garments, and when they were retired, they often found new homes with her staff.

One of the Queen’s biggest fashion moments in recent times is when she took a front-row perch alongside Vogue magazine’s editor-in-chief, Anna Wintour, at Richard Quinn’s show at London Fashion Week in 2018. In deference to this honour, Quinn paid homage to the late monarch in his most recent show, which took place only weeks after her death.

Honourable mention: Andre Leon Talley, Wintour’s once right-hand man at Vogue, died aged 73 from a heart attack in January, months after publishing his memoir, The Chiffon Trenches. Those unfamiliar with his grand persona ought to add the fly-on-the-wall documentary The September Issue to their holiday movie list.

The looks we want to leave behind in 2022

Blame Miu Miu, blame Julia Fox (who was in a relationship with Kanye West for a hot minute) but the itty-bitty mini skirt, a cousin of the ultra-low-slung jean, was a trend most of us will be happy to see the back of come Auld Lang Syne time. 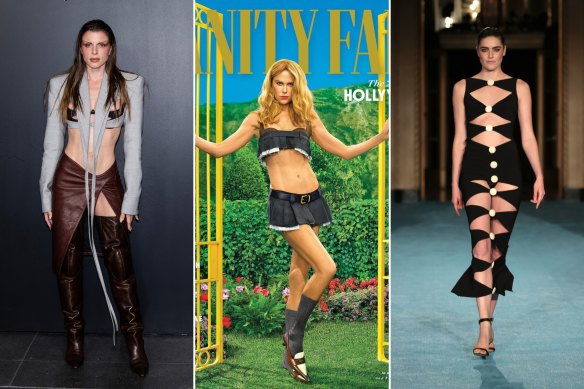 Debuting on the runway in October 2021, the skirt was a harbinger for the return of the aughts’ “heroin chic”, and a disturbing, though important, conversation about thin worship in fashion. Australian actor Nicole Kidman was a bit-player in the drama when she appeared in the skirt on the cover of Vanity Fair.

Honourable mention: Daring cut-outs that require not only specialist (or no) underwear, but also a step-by-step movement guide with the care label have reached new extremes. We’re paying more than ever for less material, and it’s time designers return to using pinking shears sparingly. No one needs to see half a pelvis with their lunch at Bondi or Sorrento this summer.