THESE passionate lads won't be getting a wink of sleep tonight… unfortunately, their fed-up girlfriends have nothing to do with it.

Yes, as Arsenal and Chelsea fans fret ahead of tomorrow's FA Cup final, a nation of football widows will be cursing the beautiful game – hearing of nothing else all day and resigning themselves to a Saturday night alone. 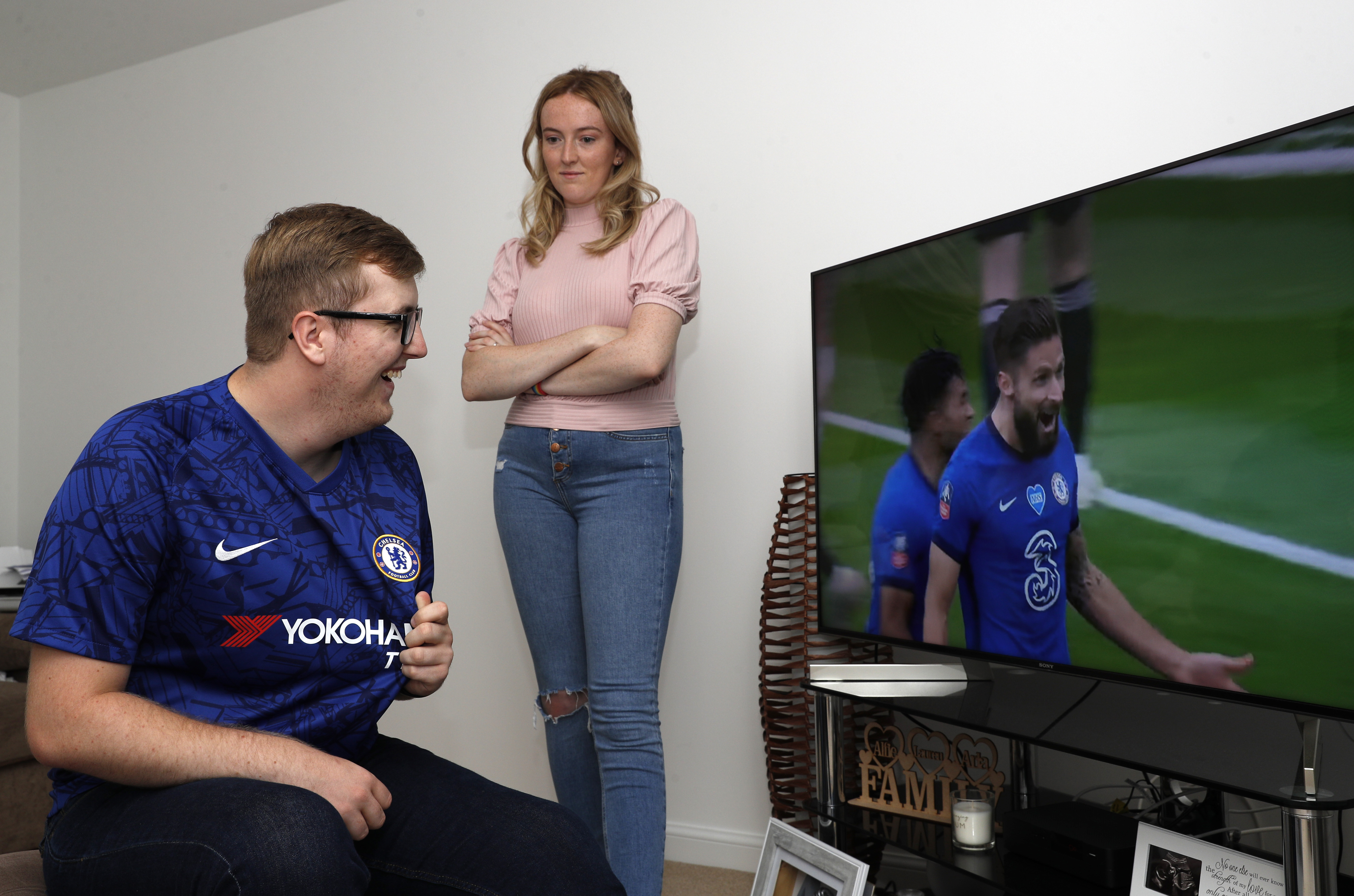 It’s made all the worse by the fact that during lockdown they never had it so good. According to a new survey, the pause on live sports had a positive impact on romantic relationships.

After coronavirus stopped play on the pitch, a THIRD noticed they were enjoying far more action between the bed posts. But as soon as football resumed, fans turned their passion back to their favourite team.

Of the 2,000 couples surveyed by OnBuy.com, more than half say they’ve noted a deterioration in their relationships since the first post-lockdown Premier League match in June. 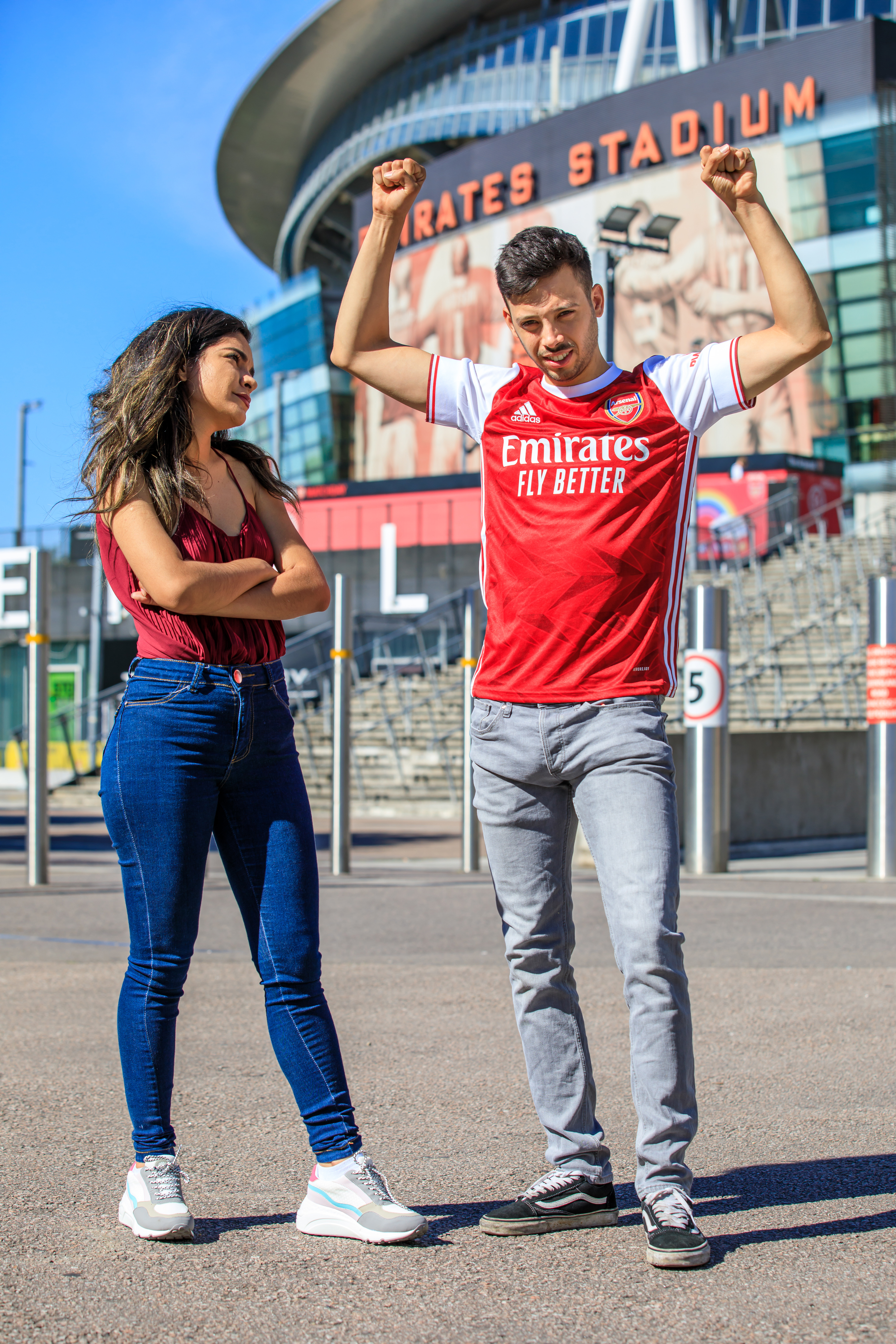 She says: "Lockdown was truly wonderful for my relationship. My football fanatic boyfriend Ranen went from constantly checking scores on his phone, to actually talking to me.

Once live games stopped, we suddenly had all this time together. We did lots of Netflix and chilling almost every day, which translated into having lots of sex. I even lost count how many times on some days.

I noticed our bond grew much stronger too. We felt more in love and a lot more connected with each other.

As a result, I felt more confident to try out new lingerie, and we teased each other more. We tried new things in the bedroom; there was nothing to distract us – it was just us two.

We first met eight years ago as we studied together but we only got together a year and a half ago. 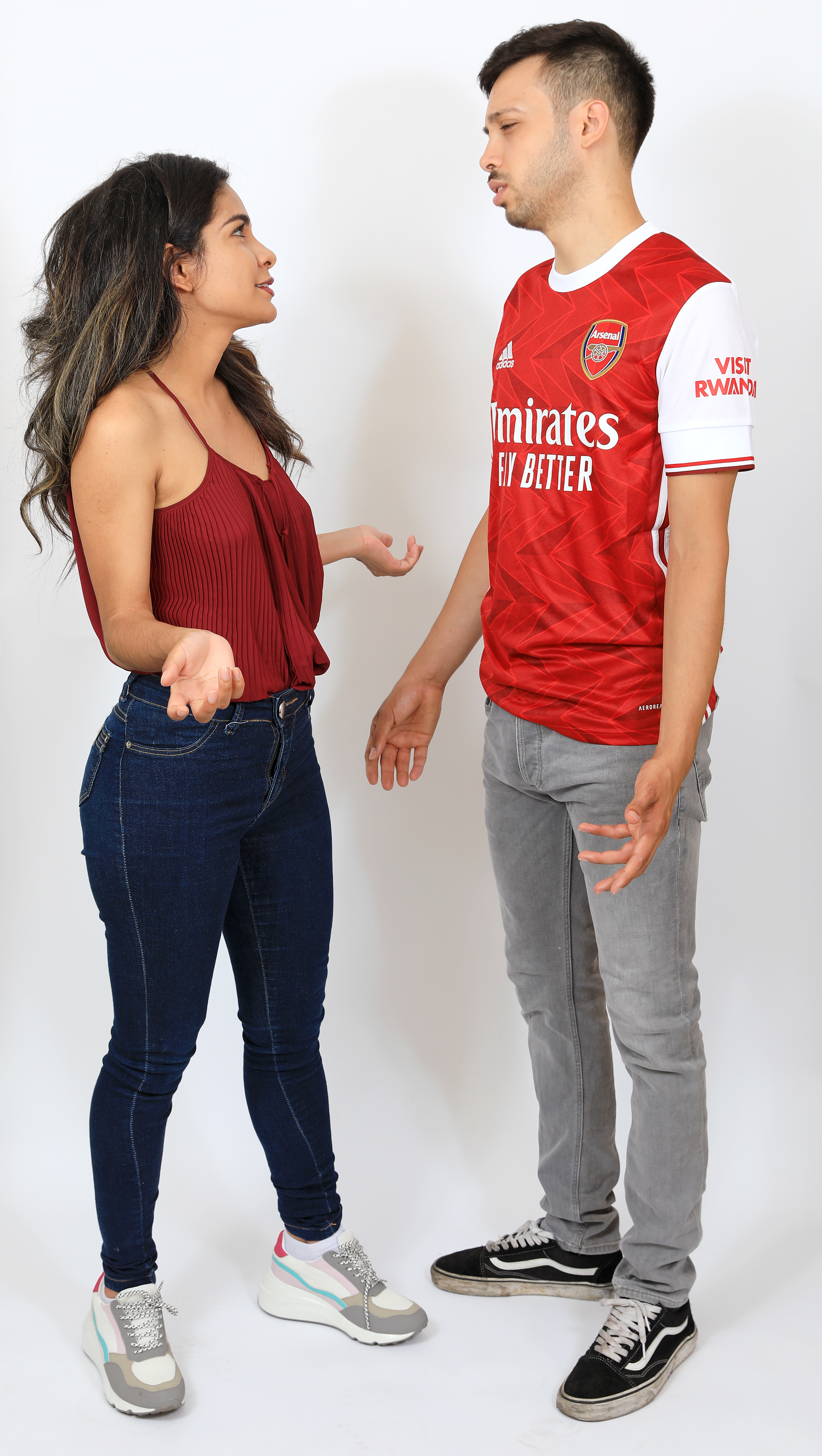 I always knew he was a strong Arsenal fan – we would go to watch matches together.

But as things got more serious between us, I realised football was literally taking over our relationship. It was like his second girlfriend, and I wasn’t sure who came first.

If an Arsenal match is due to be on, he won’t be able to focus all day. I just hope they win otherwise he’s in the worst mood. Sometimes I would try to cheer him up with romance but he’d be too busy messaging his friends about the result.

It got to the stage when we were only having sex once every two weeks. If I complained, he would always remind me that I knew what I was getting into – what could I say to that?

So you can imagine my delight when the live games stopped in March.

We have gone from sex marathons to sex starved.

Things were perfect for around three months and then the German league started again. I didn’t mind him watching that because he wasn’t obsessive.

But now the English teams are back, he has reverted to his old ways.

Whenever I try to give him a hug or be flirty, he’ll still be gawping at the match.

I even try to tease him to say it’s me or the football, but I always lose that.

We have gone from sex marathons to sex starved. 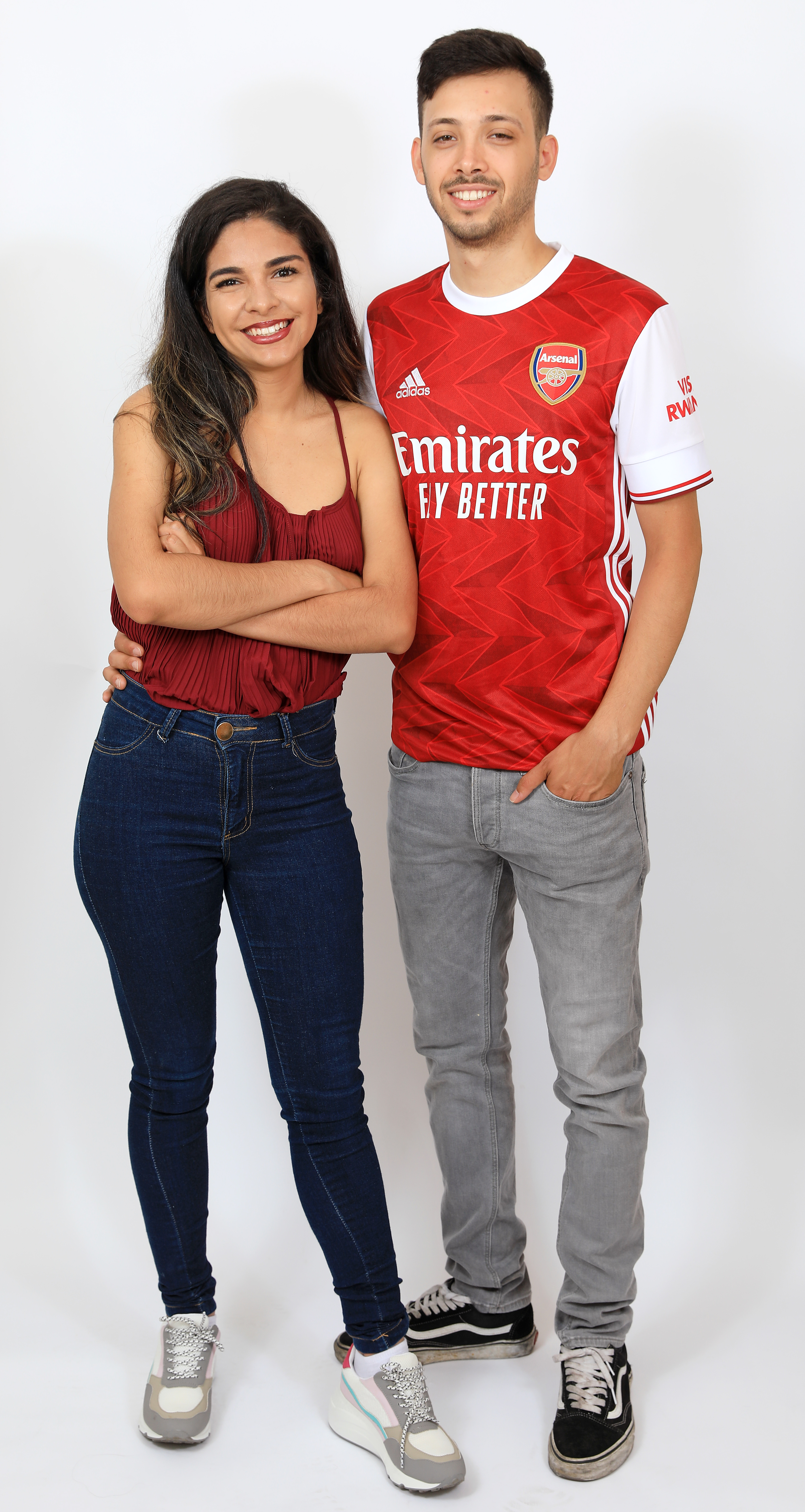 He is so excited about tomorrow’s big game. As soon as he knew Arsenal were playing Chelsea, he was on the phone talking to his friends about it.

I had taken the day off to spend with him but he’s told me he has to have the whole day free for the final. He said I can’t complain because it’s such a big deal."

Ranen says: “I really loved the quality time I spent with Even during lockdown, we did have a lot of fun together.

But I love Arsenal, they are my team, I have missed watching them play and they are part of me.

I know my mood gets to Even, but it’s hard for me too. Now we are coming out of lockdown, I will keep trying to make her smile and surprise her every now and again to keep the spark going.” 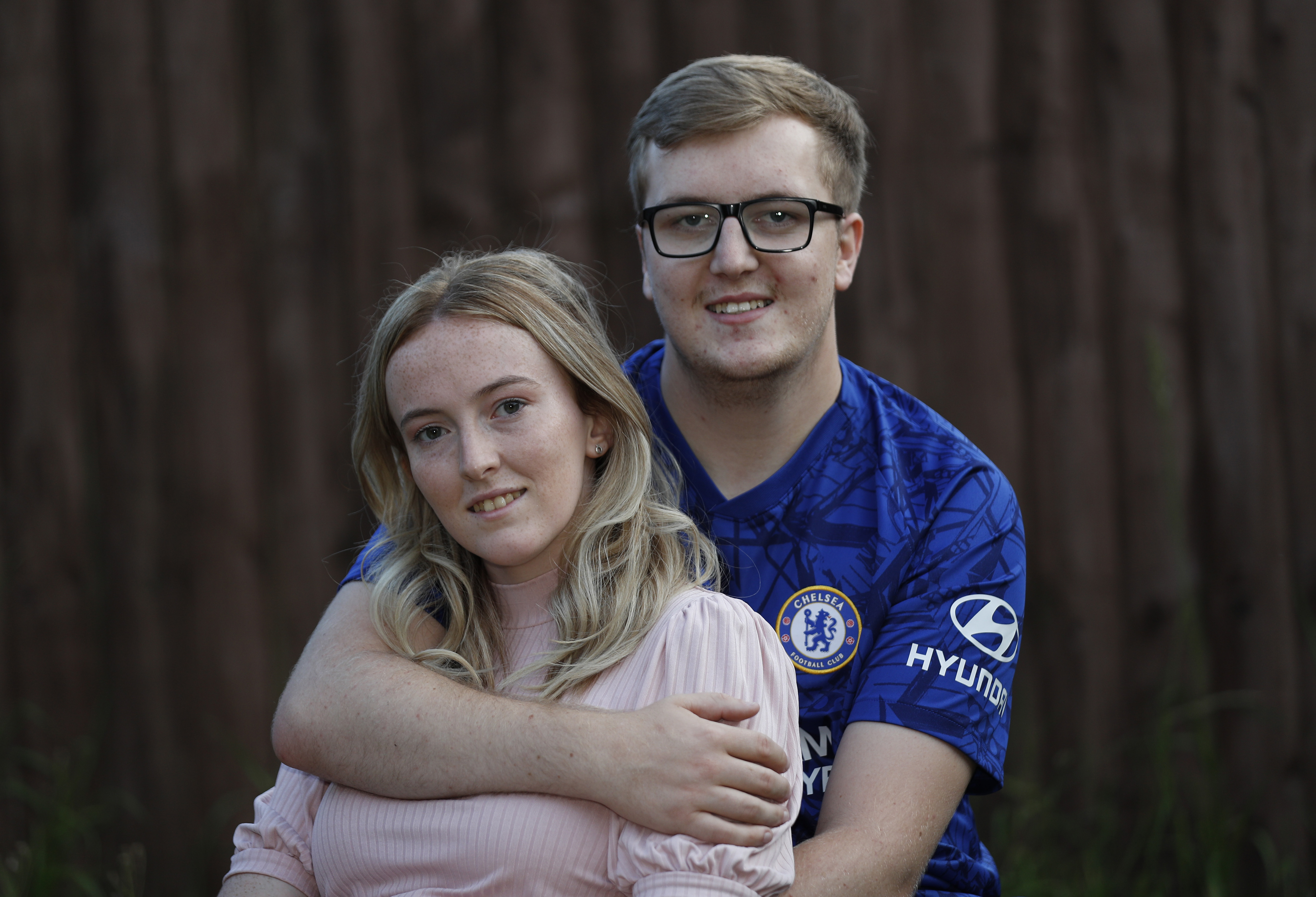 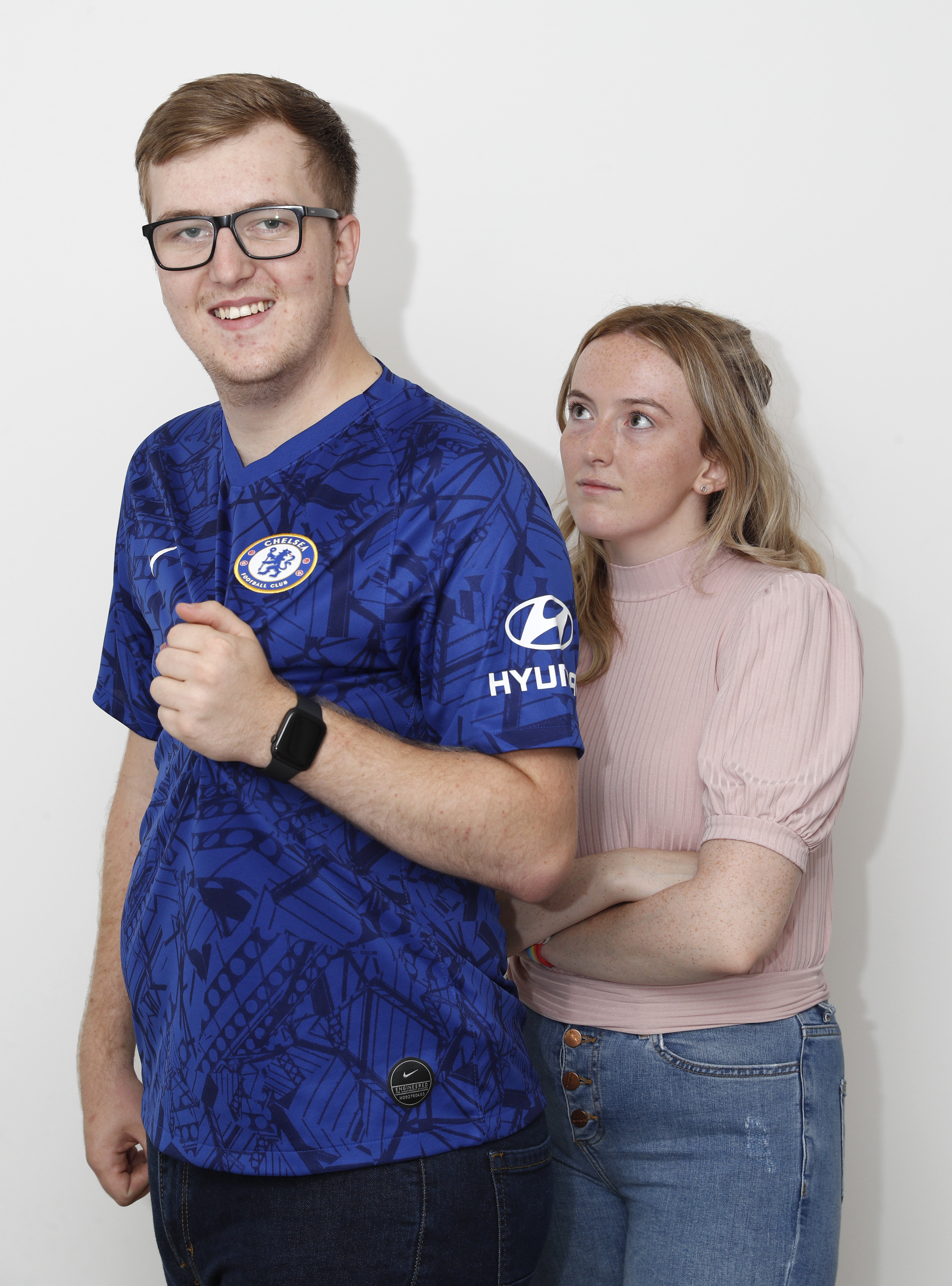 She says: “Alfie is football crazy, and he is a true Chelsea blue boy.

Our social schedule is dominated by when and where Chelsea play, our holidays are booked around it, and date nights don’t happen if his team is in trouble.

He will travel to watch nearly all of their games, and I quickly learnt that being in a relationship with Alfie meant accepting his obsession with Chelsea.

But when lockdown started, I saw a completely different side to my man. It was pure bliss!

I was pregnant at the start, and suddenly Alfie had all this spare time to spend with me.

Date night was happening every day and we both enjoyed ourselves more in the bedroom than ever before.

With no football and a baby on the way, I was determined to enjoy my man’s love more than ever. 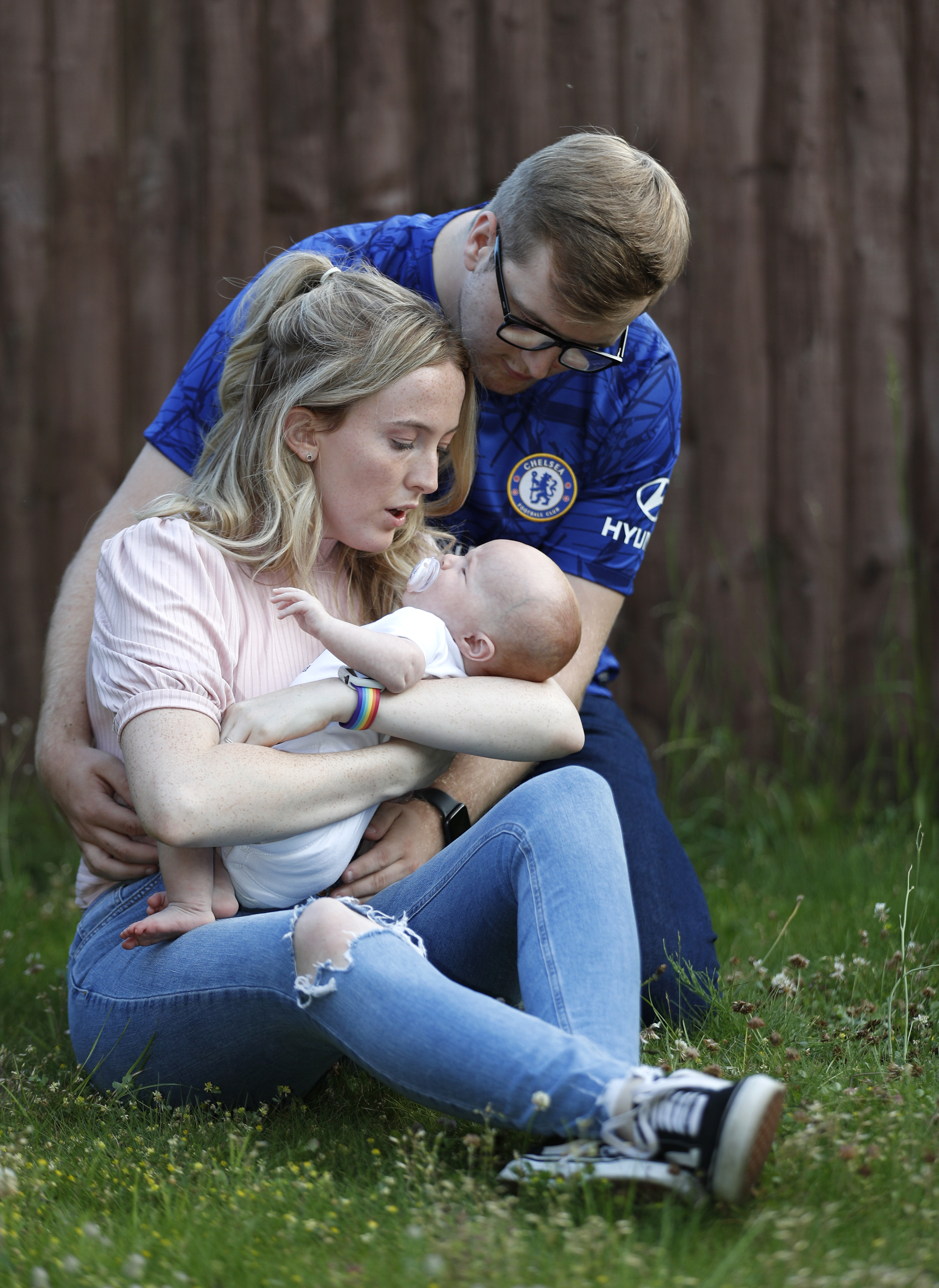 He was amazing both in and out of the bedroom.

Alfie would cook me a romantic dinner, with wonderful bedroom sessions and morning lie-ins that would stretch all day.

Having no football meant we rediscovered each other, and match days were mine.

Whenever I needed love and attention he was there.

When our daughter was born in May, Alfie was cheering me on not Chelsea, and it made me fall in love with him all over again.

But now games have restarted, I have been football widowed again.

Now my lockdown loving is a thing of the past, and he cannot wait for the big game tomorrow – it is all I have been hearing about.

He has been discussing the strategy, like he is the football manager and I can’t get a word in edgewise.

He’ll be at the pub with his Chelsea buddies this weekend.

I’ll be at home trying to work out how to convince him lockdown is back on! 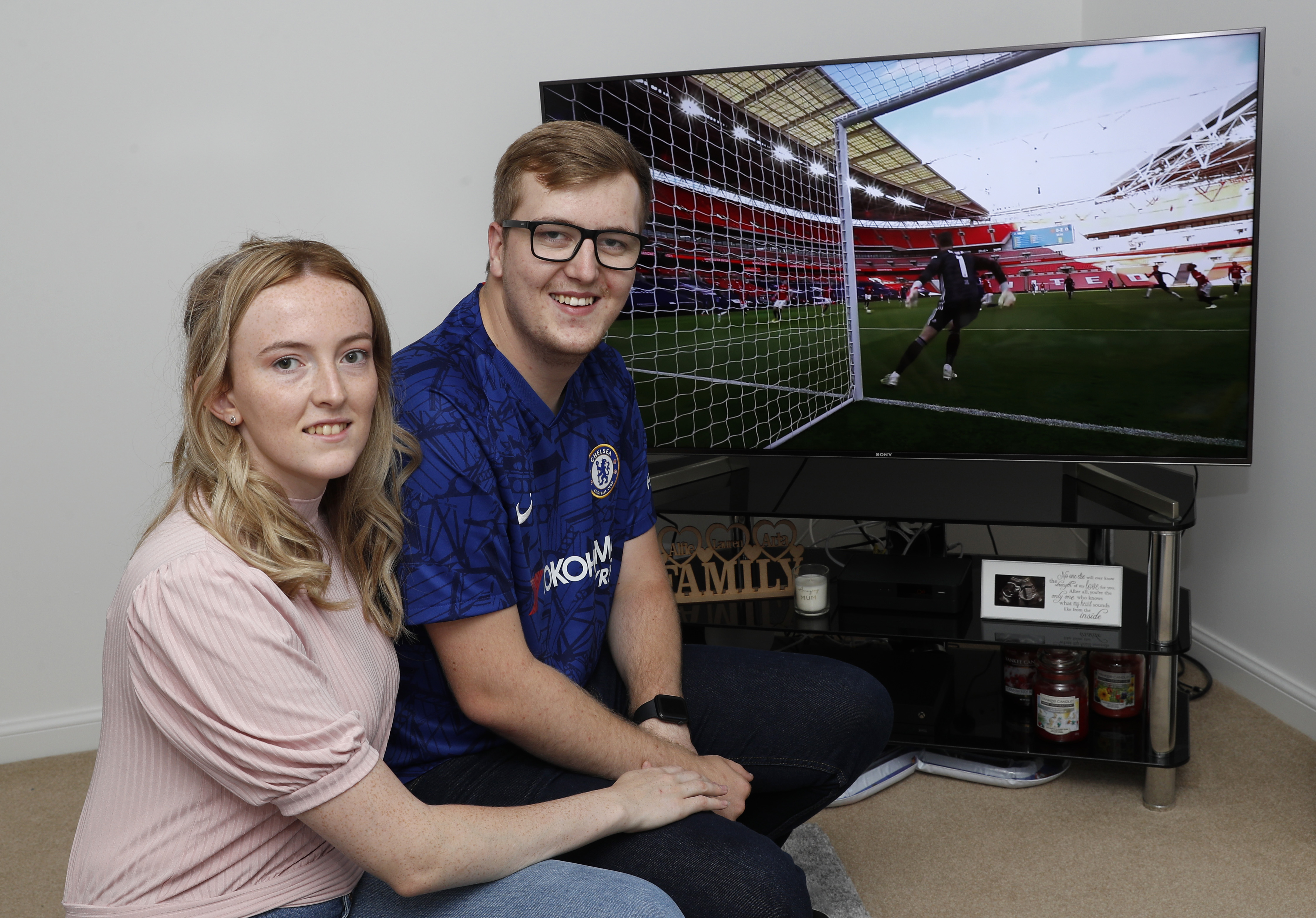 Alfie says: “I love my missus but when it comes to Chelsea playing nothing gets in the way of that.

“I am living for this weekend, I’m Chelsea through and through and I cannot wait for the kickoff.

“It’s a sure sign life is back to normal. Following Chelsea is our family tradition and I love it”.

‘When we had sex in front of the TV, he was staring at the footie!’

Laura Myers, 40, a nail technician, lives with boyfriend Ags, 38, a duct fitter, and their daughter, Sophia-Mae, four, in Barking, Essex. Laura has two sons Lewis, 19, Samuel, 12, from a previous relationship. 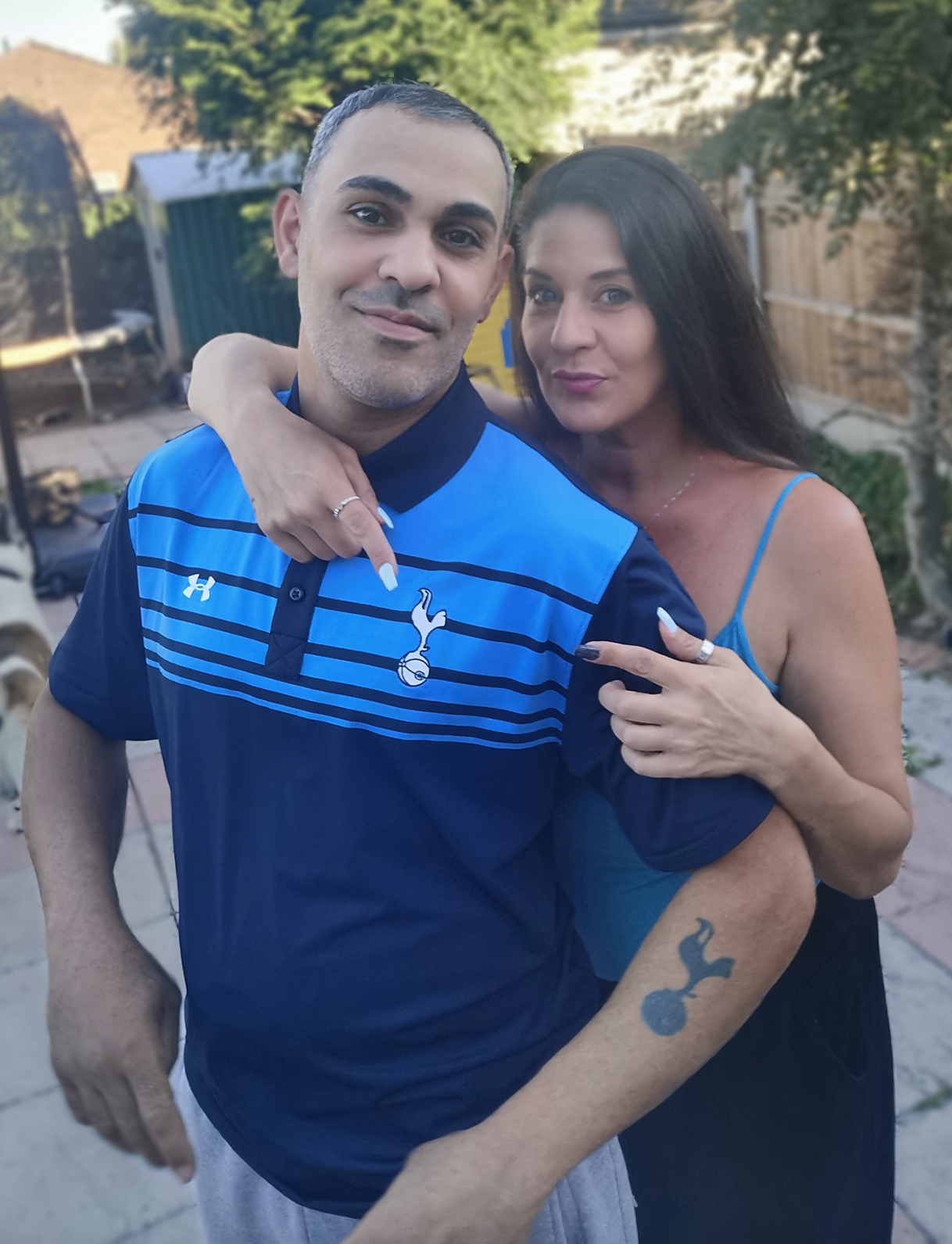 She says: "I’ve always hated the football season. We have a big television in the conservatory and every single night Ags watches back-to-back matches – armed with a cuppa, a bar of chocolate and some popcorn.

He is a Tottenham supporter and I have tried to be the enthusiastic partner and watch it with him. But unless it’s an England game, I find it hard to stay focussed.

We even had sex once in front of the TV. I wanted to see where he would focus his attention. He wasn’t looking at me though – he was concentrating on the action on the screen instead. Deep down, I already knew I couldn’t compete.

That’s why life was so much better when live football was halted.

Lockdown was great for us as a couple. Our sex life was super-active all of a sudden.

Even with the children at home we made time for a quickie together. And because we weren’t going out of an evening when our daughter went to bed, we would do the same. 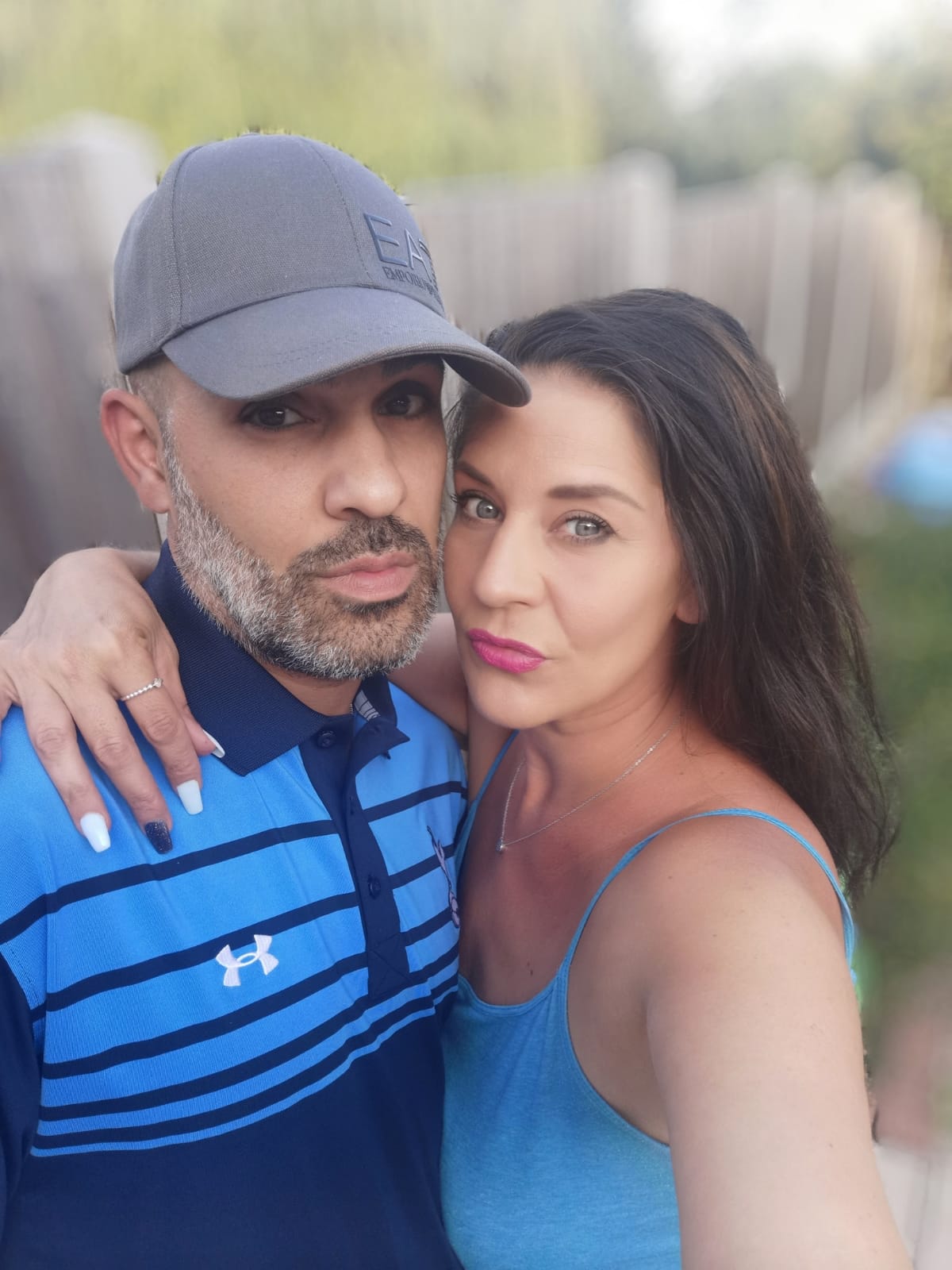 When the football started up again, however, the twice daily sex sessions dropped off immediately. I used to look forward to our early evening sessions. Now there is no chance of that.

I know Ags loves me but I’m now second place in his affections. What’s more, I have to make do with the smaller TV in the living room."

Ags says: "Obviously I was devastated when the football stopped. I know there is a pandemic but even so I missed it.

Laura and I have a great relationship and we were closer during lockdown. But if I am honest I am relieved the football is back on."

‘We had lockdown sex every night – what else was there to do?’

Clare Clark, 35, an admin assistant, lives with partner Micky Clark, 33, and their three children in Peterborough. 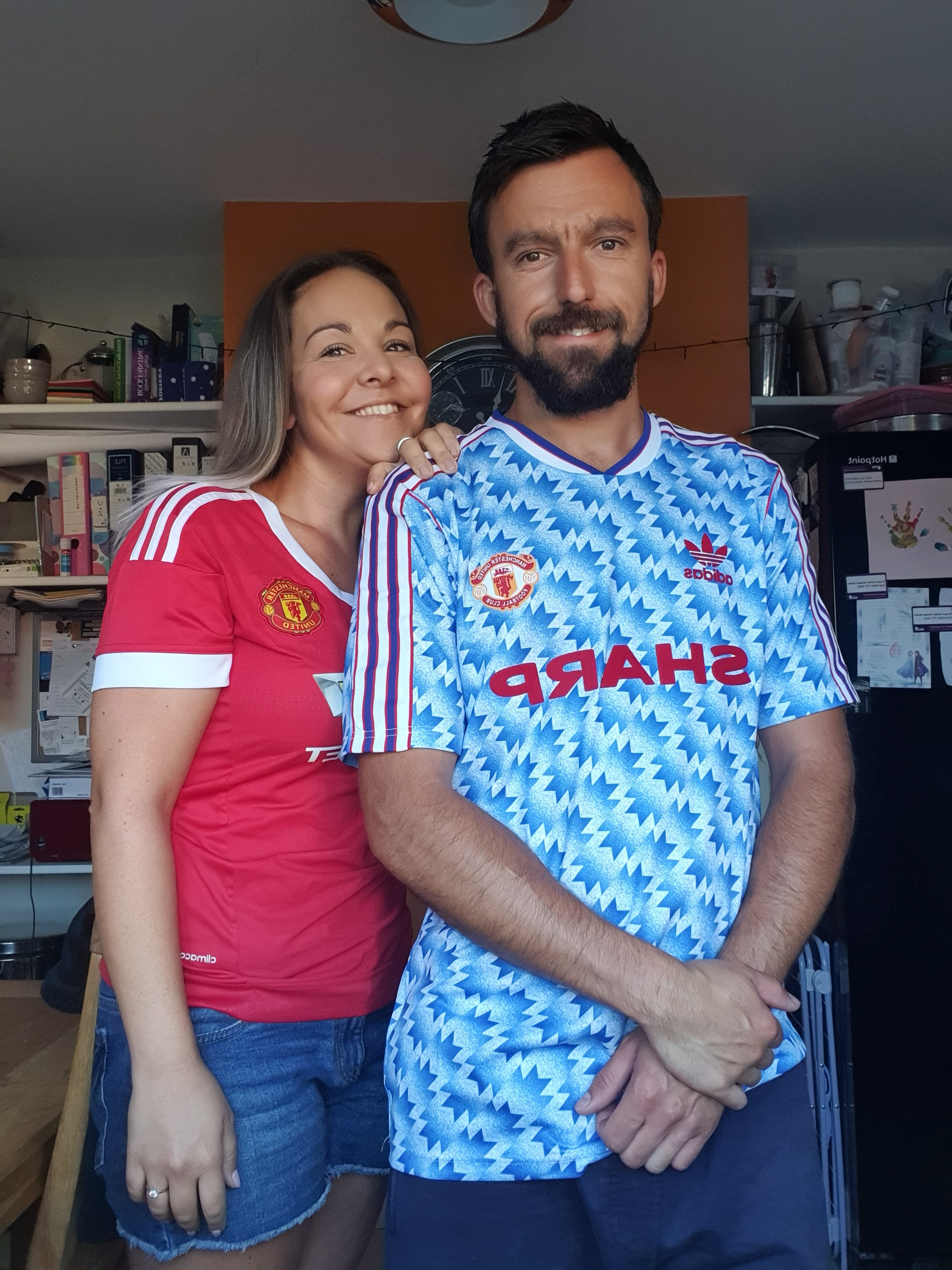 She says: "When Micky found out the football was cancelled it was like someone had died.

He is a massive Man United supporter. My own family are obsessed with the game – it’s like a religion – so I knew I was signing myself up to life as a footie widow.

When we got together seven years ago, I accepted it. I even got myself a Man United top to get his attention.

My family are Arsenal fans so the betrayal nearly killed me. Let’s just say when we finally got together it was definitely worth it!

It wasn’t until lockdown that I realised just how football monopolised family life. The children are glued to it too and a normal football season is followed by summer tournaments, so it's always on the television.

But with all live games off, Micky was suddenly focussed on me. We are a close couple and have an active sex life anyway – normally two to three times a week.

But suddenly we were having sex every day – what else was there to do? 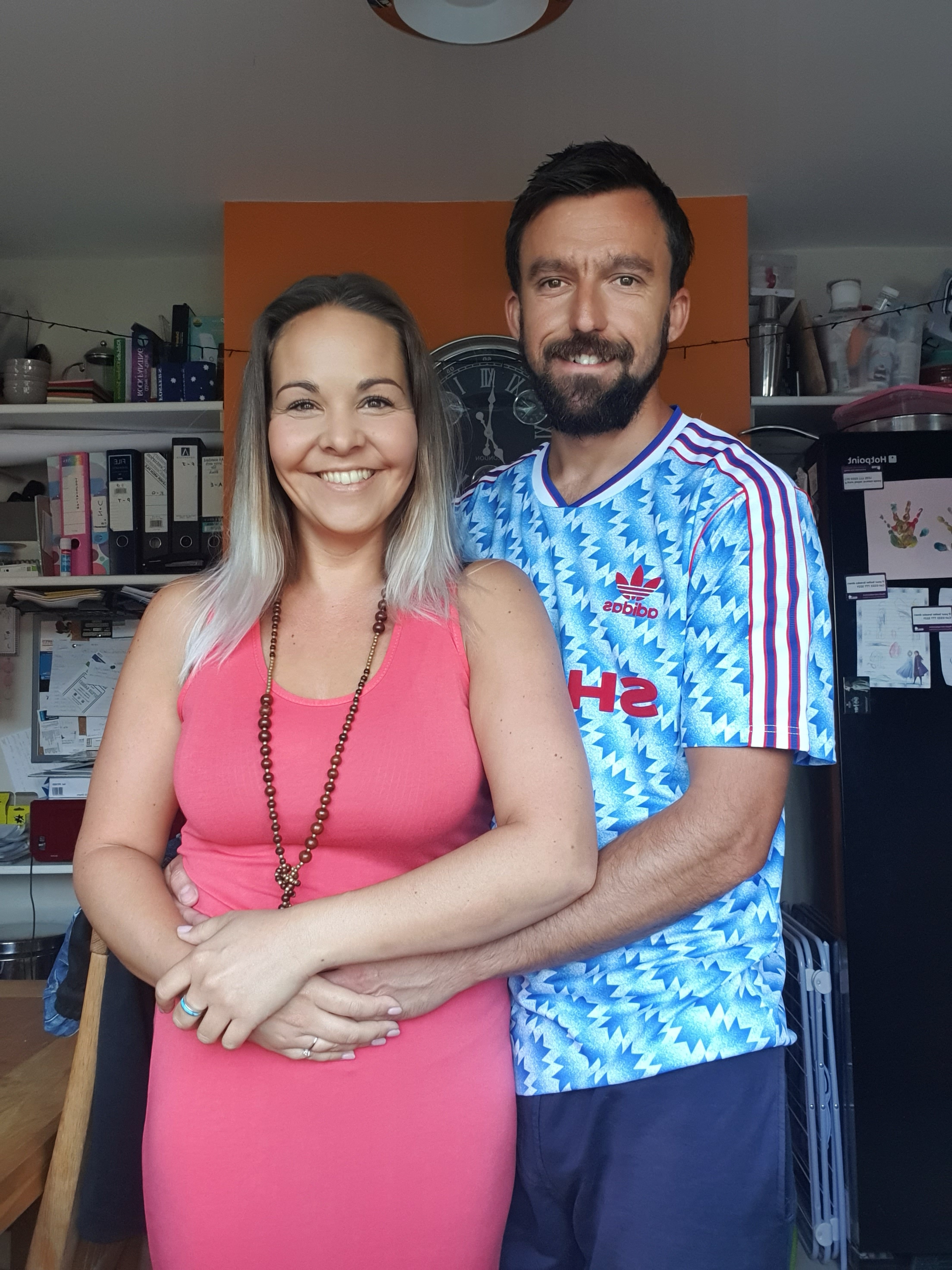 Our relationship improved massively – Micky wasn’t working so instead of me having his evening meal being ready when he came home from work, we’d cook it together.

We had a laugh playing puzzle games together too. I didn’t realise how competitive I could be and it took Micky by surprise too. He still ribs me about it now.

When football came back, it was bittersweet for me. Micky was beyond excited but our romantic evenings faced instant relegation."

Micky says: "Clare gets my attention when the football is on television or not.

She’s a very attractive woman and a dream partner. She totally gets that football is like a religion for me and is happy to take second place when the games are on."