Western luxury money has been pouring into China at a rapid rate this fall.

In the last four weeks alone Richemont, the Swiss owner of brands like Cartier and the e-tailer Yoox Net-a-Porter, announced a joint venture with the Chinese online retail giant Alibaba in a bid to crack the online shopping market of a country now responsible for almost a third of all luxury sales worldwide.

Next, Condé Nast International unveiled plans for Vogue Hong Kong, the 26th global version of the fashion title with a print edition published in the traditional Chinese characters used in Hong Kong and a bilingual website, in Chinese and English. Then, in its latest earnings call, Ralph Lauren said it had opened 10 additional stores in mainland China in the last quarter, putting it on track to open more than 50 by the end of 2019. And Coach said it would stage its first runway show in China on Dec. 8, a blockbuster spectacle and after-party titled “Coach Lights Up Shanghai.”

China’s great luxury promise appears to have the sector’s biggest power players well and truly in its thrall. But in the background, dark clouds have also been gathering.

A brewing trade war with the United States, the weakening renminbi and the sputtering growth of China’s economy in recent months all have executives on edge. During the fall Golden Week, a holiday period around the Oct. 1 National Day observance when many Chinese consumers splurge on travel and luxury goods, sales grew at the slowest pace since 2000, according to data from China’s Ministry of Commerce.

The painful luxury industry downturn that occurred worldwide between 2013 and 2016 in the wake of a Chinese government clampdown on corruption and a spate of terrorist attacks in Europe — ending years of soaring sales growth — is still fresh in the minds of many. Could a similar situation be about to unfold again?

An inflection point came in early October, at the end of Golden Week, when social media posts showing emptied shopping bags, luggage searches and snaking lines at airport customs checks suggested that the state was cracking down on the practice known as daigou, when Chinese travelers buy high-end merchandise on trips abroad and sell the items at a profit after they return home. Spooked that the appetite for luxury goods in China could tip into a rapid slump, investor jitters prompted a global market sell-off, largely hitting European players such as LVMH Moët Hennessy Louis Vuitton, Kering, Richemont, Burberry and Prada. Companies in the United States, like Tapestry and Tiffany & Co., also felt the strain.

Some brands have sounded notes of caution about the current and future state of Chinese consumer confidence.

“In the past few months I would say there has been a slowing down of consumption, and probably the Chinese consumer is becoming more careful in what he or she does,” said Ermenegildo Zegna, chief executive of the Italian men’s luxury house of the same name. “I am more cautious than three months ago. For next year, we are going to plan a conservative budget because there are many uncertainties in the air and you have to be realistic.”

LVMH, the world’s largest luxury company by sales and the owner of big-name brands like Louis Vuitton, Christian Dior and Givenchy, acknowledged the customs crackdown in China alongside the risks of operating globally “in an uncertain geopolitical and monetary context,” pointing to Louis Vuitton’s slightly weaker sales to Chinese shoppers in the third quarter. Meanwhile, Kering, which reported a total third quarter revenue rise of 27 percent, to 3.4 billion euros (more than $3.8 billion), and a China revenue jump of 30 percent in the first half of 2018, has still seen a fifth of its share price wiped out since June on fears of a Chinese consumption contraction. According to RBC Capital Markets, a global investment bank in Toronto, similar concerns have produced an average share price decline of 20 percent at luxury companies since mid-May.

So what will come next for a sector that Bain & Co. still predicts will grow by 6 to 8 percent, to €281 billion from €276 billion, this year? Given the money still being plowed into the region by brands and investors alike, could the stock market be overreacting?

“Clearly stocks were hit dramatically in past weeks, with investors keen to avoid being stung as they were in the last downturn,” said Erwan Rambourg, global co-head of consumer and retail research at HSBC. “However, it is possible that these macro fears are overextended and we can expect more of a soft landing.

“We believe the current ‘slowdown’ is more to do with being a period of normalization, after two years of phenomenal growth,” he added. “The sector decline will not be on as steep a slope as the market seems to expect.”

Thomas Chauvet, head of luxury goods equity research at Citigroup, concurred. He noted that many luxury brands had re-evaluated their expansion strategies in China in recent years, particularly around retail networks, targeted digital marketing and pricing, so their business — and bottom lines — are better protected in the event of another cyclical downturn.

He also added that luxury’s latest bull run had not been wholly dependent on Chinese spending: The American market has improved significantly in the last year, while many brands have posted double-digit sales growth in both Europe and Japan.

“Clearly China has been the white-hot engine for luxury growth lately — but this is also a global story, and price harmonization across markets is better than it was a few years ago,” Mr. Chauvet said. “The central question now should be whether international demand drivers are still in place to support a healthy level of sales and earnings growth over the next 12 months as China moderates.”

However, some market observers have highlighted positive consumer trends in China. As the country looks for ways to shore up its domestic economy, the government crackdown on daigou and the lowering of import duties this summer to encourage consumers to make purchases at home rather than chasing lower prices abroad are likely to make their mark, according to Angela Wang, a partner at the Boston Consulting Group and co-author, with the Chinese investment holding conglomerate Tencent, of a recently published study on China’s luxury market. She said that, although Chinese customers now are responsible for 32 percent of luxury goods sales worldwide, that number is still expected to grow to 40 percent by 2024 and power 75 percent growth of the global market. Unsurprisingly, millennials — particularly educated women — will be the driving force. 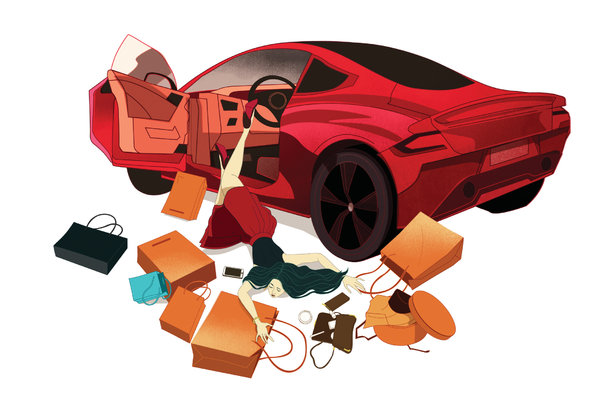 “Luxury shoppers in China have an average age of 28, a majority have college degrees and are far better educated than their parents,” Ms. Wang said, noting that more than 50 percent of luxury customers now lived in second- and third-tier cities like Tianjin and Dalian, bolstering the importance of online platforms as there are few premium malls in those locations.

“Social shopping is now 11 percent of total luxury commerce in China and growing at a tremendous rate,” she added. “All this momentum won’t disappear in the wake of the recent slowdown.”

The fact that many major players have continued to double down on their presence in China despite the recent uncertainty suggests that long-term opportunities will continue to trump short-term volatility. Richemont’s deal with Alibaba will allow sites like Net-a-Porter to begin business on Luxury Pavilion, an invitation-only luxury platform on Alibaba’s Tmall site — even as many Western brands are continuing to be cautious in their embrace of Chinese e-commerce and alliances with local internet platforms, primarily because of fears of counterfeiting and the risk of diluting the exclusivity of their products. Also, the action follows an investment last year by JD.com, Alibaba’s rival, in the luxury online marketplace Farfetch.

“Our digital offering in China is in its infancy,” said Johann Rupert, Richemont’s chairman, “and we believe that partnering with Alibaba will enable us to become a significant and sustainable online player in this market.”

Western companies are not the only ones looking farther afield to secure growth prospects.

Despite the vast market on their doorsteps, a handful of Chinese luxury investors have been exploring a new market of their own in search of greater returns: Europe. This year, Shandong Ruyi bought the Swiss leather brand Bally while Fosun acquired the French fashion house Lanvin, both moves devised to reap profits from their countrymen’s appetite for luxury marques that otherwise would go into the pockets of Western companies.

And for all the jitters around Golden Week, Singles Day — the annual one-day shopping festival founded by Alibaba as a time for Chinese consumers to celebrate being single — smashed all records Nov. 11 to become the biggest sales event in history. A record $30.8 billion in sales were made in 24 hours, a 27 percent increase on the total last year. Looking forward, the company said, expectations are that those figures will continue to rise.

The day after the event, Michael Evans, president of Alibaba Group, talked about it at The New York Times International Luxury Conference, held in Hong Kong: “Part of the reason we invest so much into the infrastructure of Singles Day — a day where we delivered over one billion packages in 24 hours this year — is because we believe a time will come when we will be operating at that scale every single day.”

Now, eyes are turned to see how consumer desire for high-ticket handbags, ready-to-wear and sneakers — as well as lower-priced items such as cosmetics and fragrances — will fare during the important fourth quarter of the retail calendar.

“To say that the luxury sector is entering another perfect storm would be too aggressive,” said Mr. Chauvet, of Citigroup. “Then again, when consumers don’t feel a sense of optimism or feel worried about the world around them, luxury purchases are often the first to go. For now, the industry mode has got to be ‘wait and see.’”