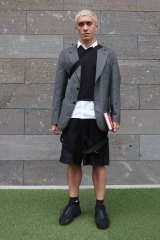 Hunter Robert Eagle: I like things that are simple, not too fussy.Credit:Arianna Lucente

I AM AT the National Gallery of Victoria.

I study law mostly and biomedicine. I also work at a research institute for law.

I AM WEARING this jacket, vest and shirt is Comme des Garçons Hommes Plus. They've got a lot of diffusion lines so that's their main men's line, and the shorts are Black Comme des Garçons, which I think is a line that was made around 2008 as a lower cost option. The shoes and socks are Nike. The bag is a little Prada bag. The rings… I think that was from Pandora and this one's a Maison Margiela one that my mum got for me for my 21st. I picked it.

MY STYLE IS Oh, that's a really hard question. I really like Comme as you may have guessed, so I kind of seem to go towards that. I like things that are simple, not too fussy. I like fairly classic male dressing but with something interesting about it, and I think Comme does that well where it's like a nice suit jacket but then they'll make it more interesting by playing around with it a bit. That's the best way to describe it.

I ADMIRE THE STYLE OF I don't know if there's any one person. There are a few models who dress nicely. I really like this guy called Jacob Bixenman. I like thinking more about how people dress, if that makes sense. Ways of dressing are more appealing. Also, I think Rihanna always looks good, not that I try to look like her. I like her approach to dressing. I don't really try to dress in a certain way, I just dress comfortably. I don't know if I'm brand-driven. I say that while wearing entirely one designer. I like that sort of thought that somebody has put behind the clothing.

MY FAVOURITE PLACES TO SHOP ARE I do a lot of online shopping. I buy mostly everything second-hand from Japan. It's pretty affordable. Shipping's not so bad. There's a Japanese retailer called Rakuten. It's kind of like Amazon or eBay and there are lots of retailers who use that platform. There are quite a few shops that have physical spaces but then they'll also have an online store. That's mostly where I shop. Brands I like… I like Comme a lot. Margiela, Prada. Uniqlo. You can't go past a good T-shirt.

MY BIGGEST FASHION MISTAKE WAS I don't think I really have any. Not because I like everything that I've worn but I think it felt right at the time. I wore some awful shit in high school but I don't think about it. I don't think there's any mistakes.

WHEN I WAS A KID I WORE I used to like wearing all of one colour for a single outfit, so just a monochromatic outfit. I don't know what brands we wore as kids. I wasn't really paying attention but this is probably the only thing I can remember. I wore an all-beige outfit once. When I was in primary school, I got asked if I was going on safari and I got really upset about it. I think I was a well-dressed kid. I think my mum spent a bit too much money on kids' clothes, like OshKosh B'gosh and stuff like that.

I WOULD NEVER BE CAUGHT DEAD IN boat shoes.