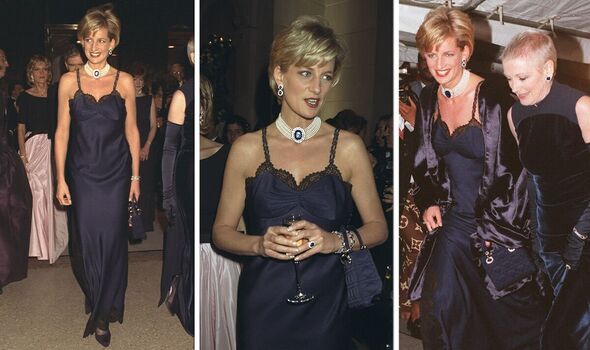 For the 1996 Costume Institute Gala at the Metropolitan Museum of Art in New York (The Met Gala), Princess Diana turned up in a slip dress that has since been described as “racy”. Because of this, she almost decided against wearing it, for fear of embarrassing those close to her.

Princess Diana’s slip dress was a floor-length, silk, navy blue version with a black lace trim at the bust.

By Christian Dior, the dress was one of Diana’s most daring looks, and she paired it with sheer black tights and pointy, black heels.

Her accessories were also eye-catching: she wore her sapphire and diamond dangling earrings, which now belong to Kate, Princess of Wales.

To match these, the late Princess donned her infamous choker, which is made of strings of pearls with a huge sapphire at its centre.

This was the choker she famously wore when dancing with John Travolta at the White House in 1985.

However, Diana reportedly almost didn’t wear the dress to the Met Gala because she was worried it might embarrass her son, Prince William, who was 14 at the time.

Diana feared the gown was “so racy”, according to the Daily Mail.

A source said: “In fact, [she] very nearly didn’t wear the dress to New York’s Met Gala for fear Prince William, then 14, wouldn’t like it being so revealing.”

Royal biographer Katie Nicholl has previously claimed that William was sometimes “embarrassed” by his mother.

She explained that William was upset by the media attention Diana got during her and then Prince Charles’ public divorce.

In Ms Nicholl’s 2010 biography, William and Harry, the royal expert spoke to William’s childhood friend Kitty Dimbleby, who was close to the young royal.

She said: “I do remember William being distracted by what was going on at home.

“At the time there was a lot in the newspapers about Charles and Diana’s marriage being in trouble.”

She added: “William told me, ‘Papa never embarrasses me but Mummy sometimes does’.”

The Dior slip dress wasn’t the only racy dress Diana wore during her lifetime.

Another revealing garment was her “revenge dress”, which she donned to a party at the Serpentine Gallery in London, in 1994.

This black dress was coined “the revenge dress” as Diana wore it following Charles’ revealing interview, during which he confessed to having an affair with Camilla Parker-Bowles.

Sarah Bradford wrote in her biography, Diana: “On the evening the program was shown, she fulfilled a long-standing engagement at the Serpentine Gallery, photographed wearing a sexy, clinging black dress which showed off her tanned, toned legs.

“Her whole manner radiated confidence [….] The underlying message was, ‘Look at me…look what you’ve thrown away and see how much I care’.”

Diana had owned the off-the-shoulder dress for several years – and had originally been planning to wear a Valentino gown to the gallery event, before switching to Christina Stambolian’s design.