Peace be the journey. It’s a phrase of Jamaican origin — immortalized in 1993’s Cool Runnings, a beloved comedy about the Jamaican Olympic bobsled team starring John Candy — that encourages one to go in peace. However, it means something more to footwear designer and renaissance man Salehe Bembury. A New York native who now resides in Los Angeles, Bembury has quite literally managed to find peace in his journey — namely the two-hour, 4,000 foot-ascent hike he embarks on each morning at 7 a.m. before the start of his day job as Vice President of Sneakers and Men’s Footwear at Versace. That journey has translated into some of the inspiration for his first-ever collaborative silhouette: the New Balance 2002R.

“I spend that time on the hike thinking and analyzing,” says Bembury. “In a society filled with screens and notifications, it’s been fulfilling to unplug. There’s a thick tension in the air that you can almost taste during these times, and I’d hike 4,000 feet above it all, to a destination above the clouds. There, I’d meditate, observe and listen. That was my newfound peace. This consistent experience with nature has given me what most designers claim to never have: time.” The end result of this literal and figurative expedition? A rich, Antelope Canyon-inspired color palette on a cult favorite New Balance sneaker. 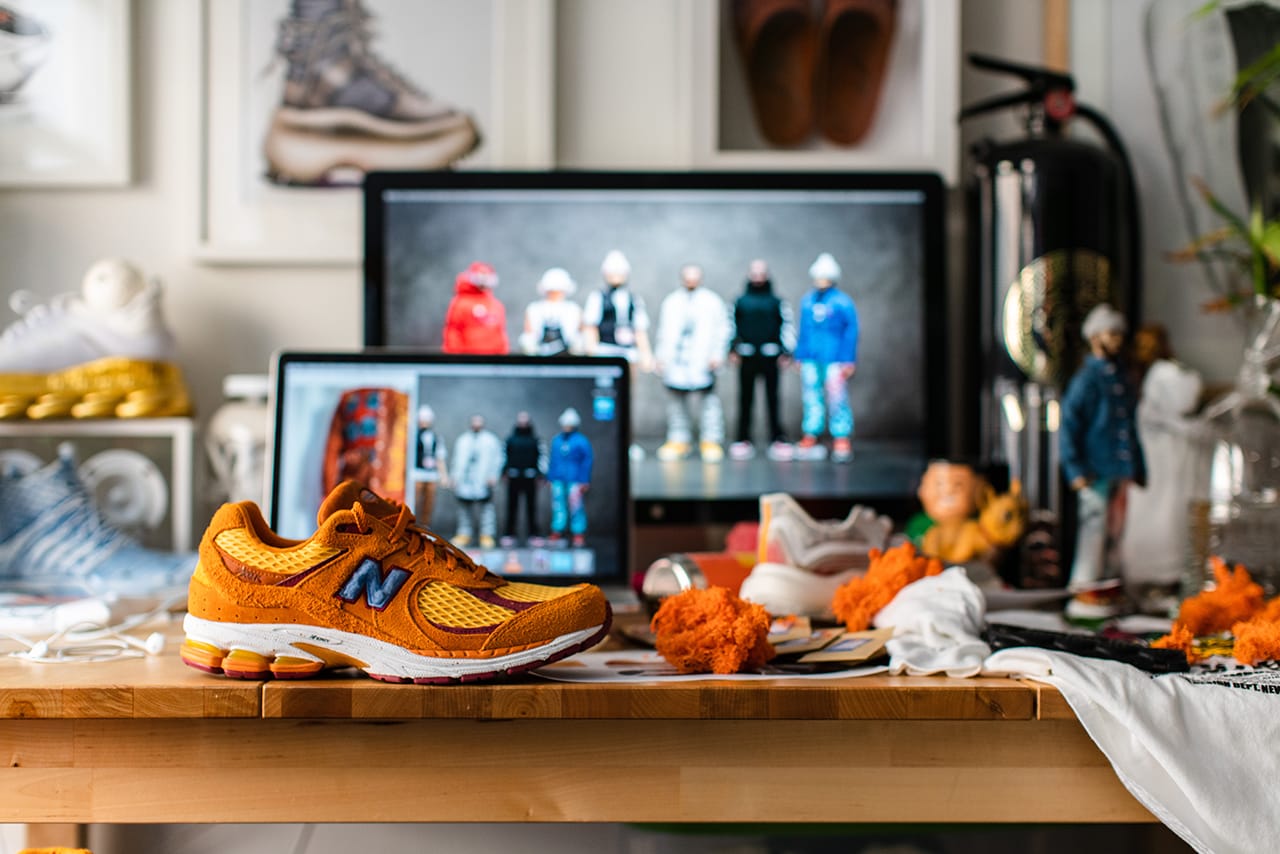 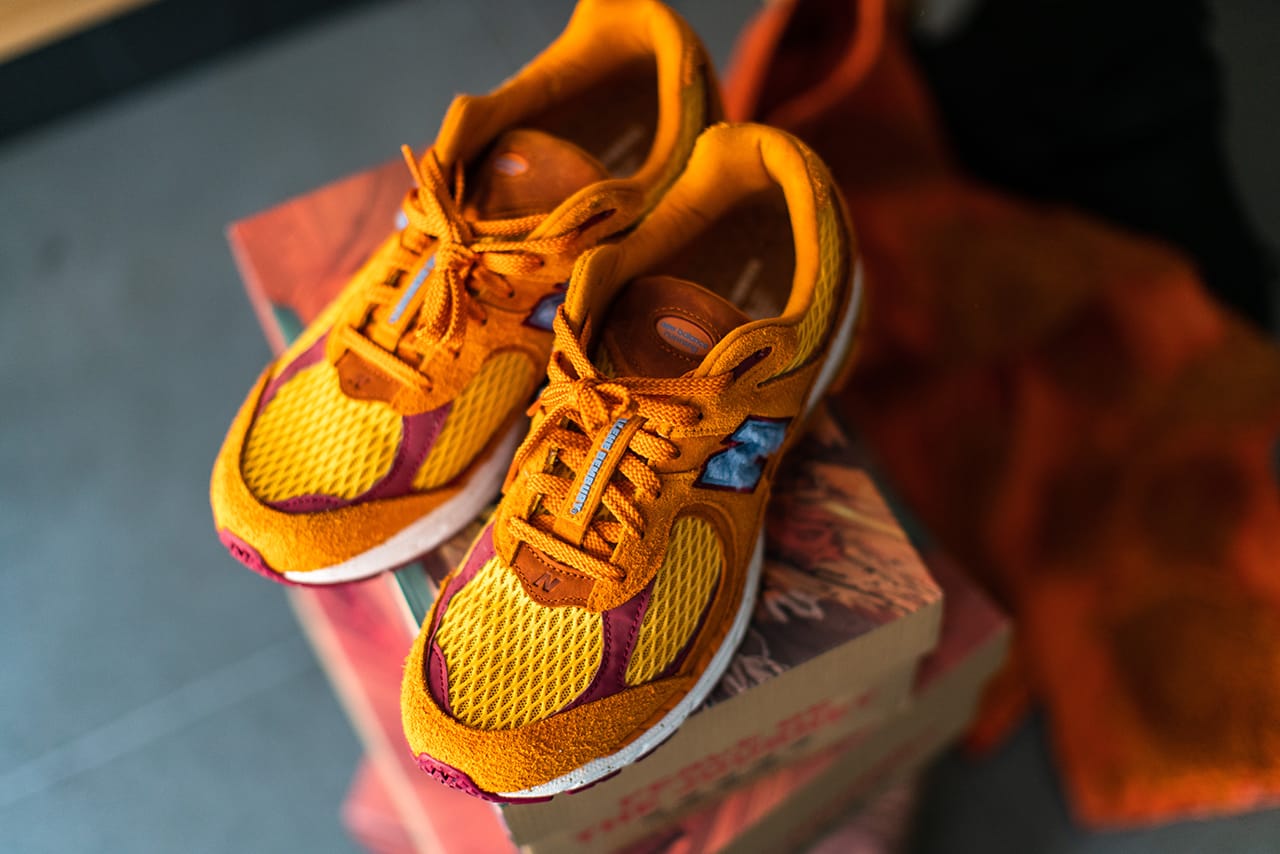 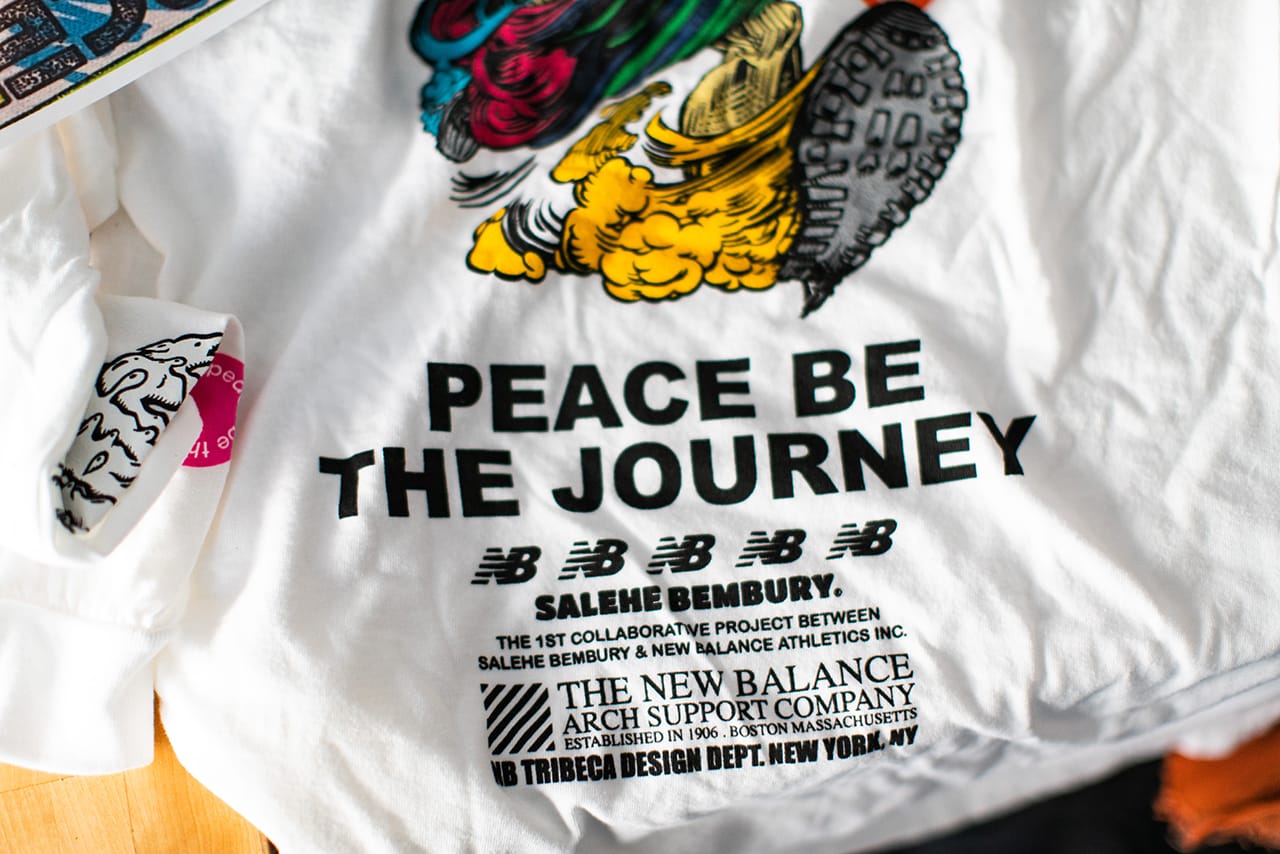 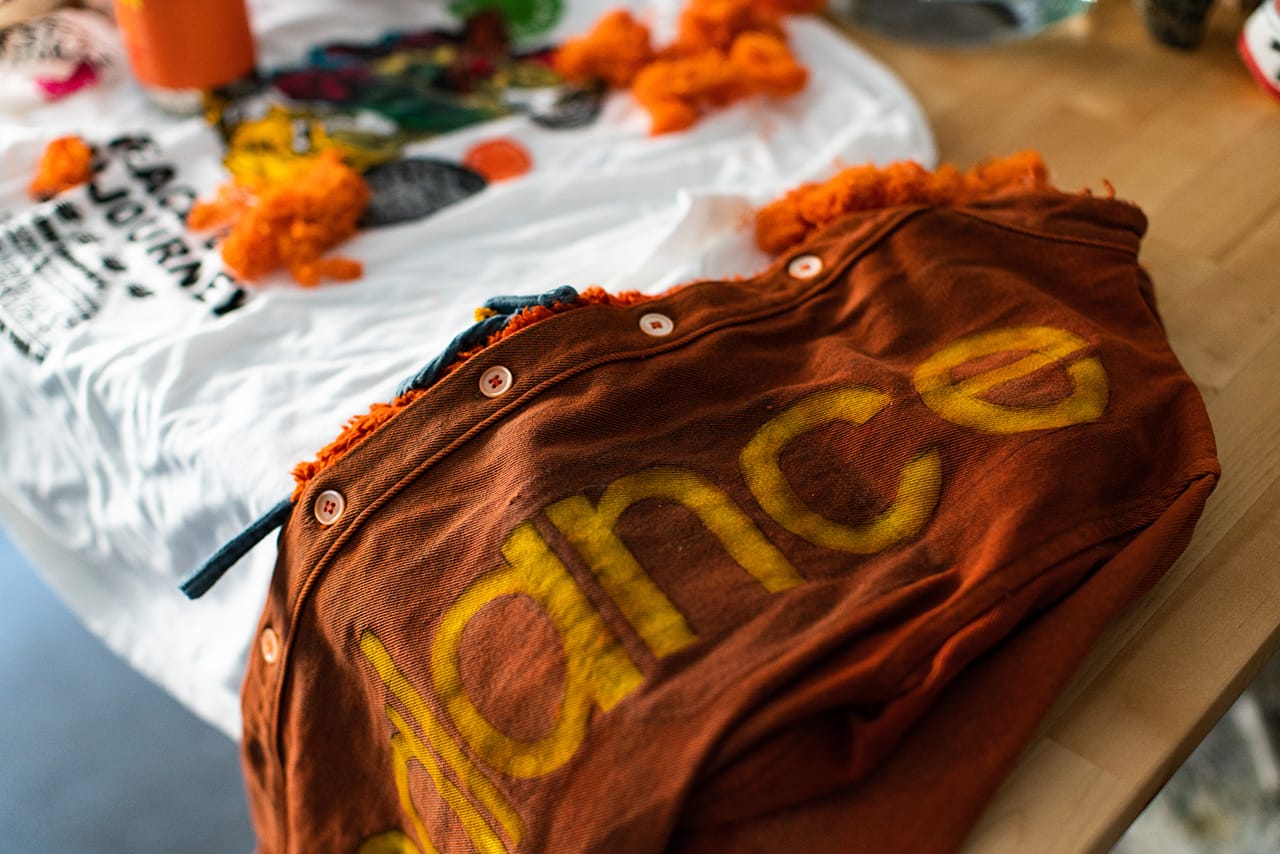 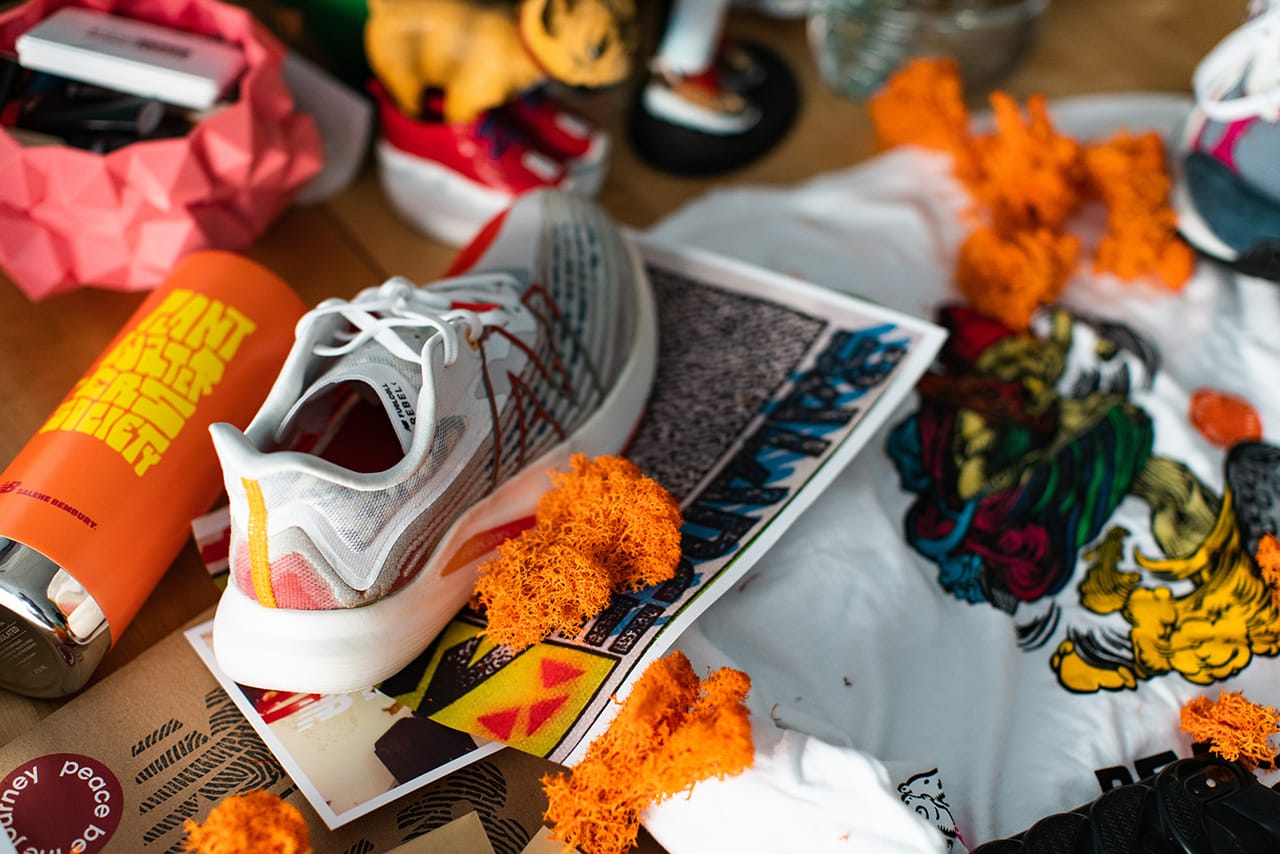 Why the 2002? A core running model from the aughts, the 2002 is emblematic of New Balance’s wildly successful year on the collaborative front: it’s stylish, sport-focused and solid in its storytelling, even in turbulent times.Yes, it’s poised for a resurgence this fall. Yes, it’s still a favorite among hard-core runners. But when a sneaker connoisseur thinks of New Balance, they’re predispositioned to think of a silhouette like the 990v5, 992 or 998, the “classics” in footwear parlance.

Bembury understands this mindset perfectly, and he himself was in the same headspace when he sat down with NB for the first time at Paris Fashion Week. “[New Balance Head of Collaborations] Joe Grondin said he wanted to show me some samples, and — while my perspective of the brand was a great one — my assumption was that he’d pull out a model from the 990 line and a Pantone fan and tell me to ‘go crazy.’”

“Joe displayed a valuable quality that until that point I’d only seen in Kanye: the ability to build a team as if he was the conductor of a symphony.”

However, what Grondin showed Bembury surprised, delighted and — along with his love for the great outdoors — inspired him. “I saw the recent Snow Peak boots, Jaden Smith’s Vision Racer and other innovations I can’t mention yet. It almost felt like I was sitting down with a certain Oregon-based brand, but all the shoes had an N.” The designer then contrasted his meetings with Grondin to his time working for Kanye West’s adidas YEEZY line from 2015 to 2016. “Joe displayed a valuable quality that until that point I’d only seen in Kanye: the ability to build a team as if he was the conductor of a symphony.”

So the question arises: what’s the main difference between working on collaborative projects and creating in-house footwear for a brand? “The majority of my career has been spent bringing someone else’s ideas to fruition, designing for a specific consumer, or choosing colors because they perform well in the market,” says Bembury. “This project was an opportunity to create with no restraints. In some cases, a larger operation may have too many opinions that can influence a product negatively. This collaboration allowed me to dissolve any distracting noise and create exactly what I envisioned.”1 of 5 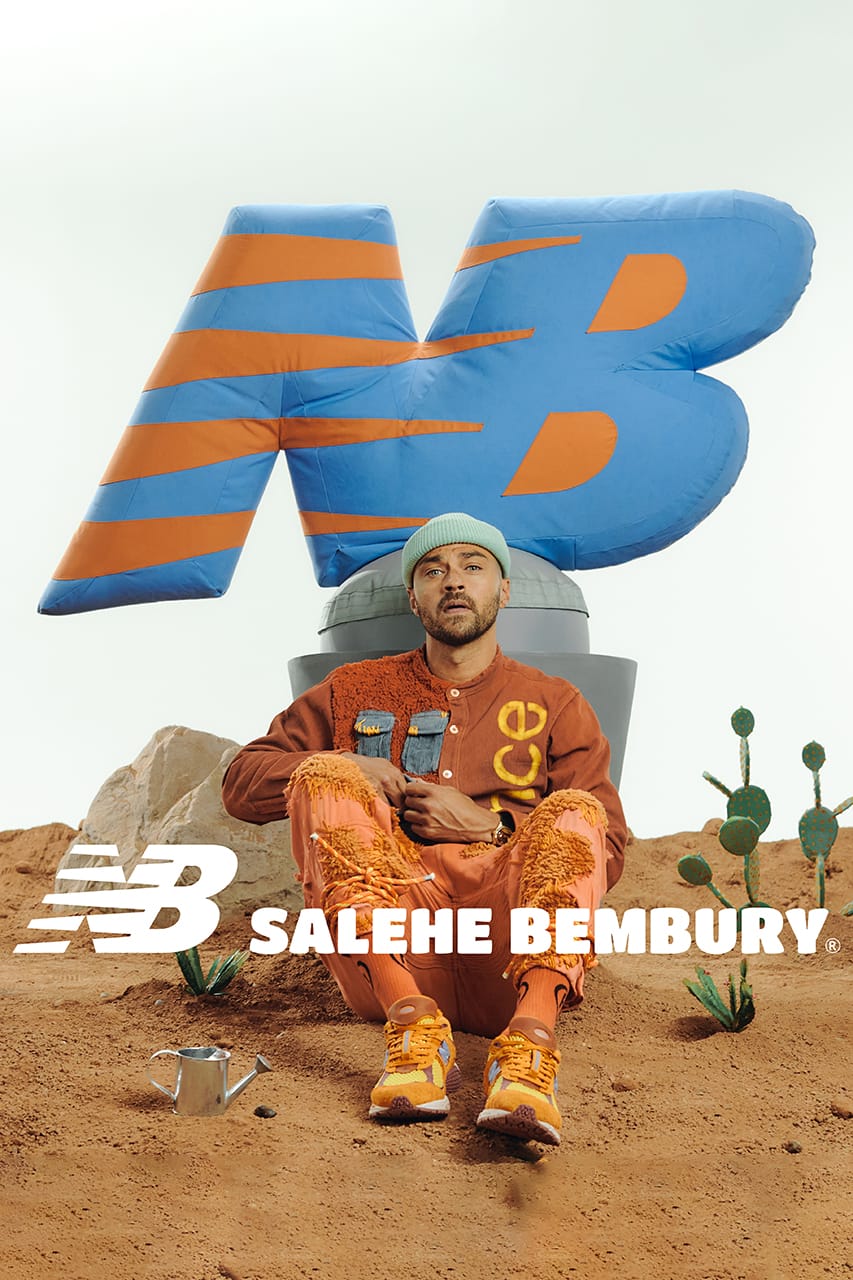 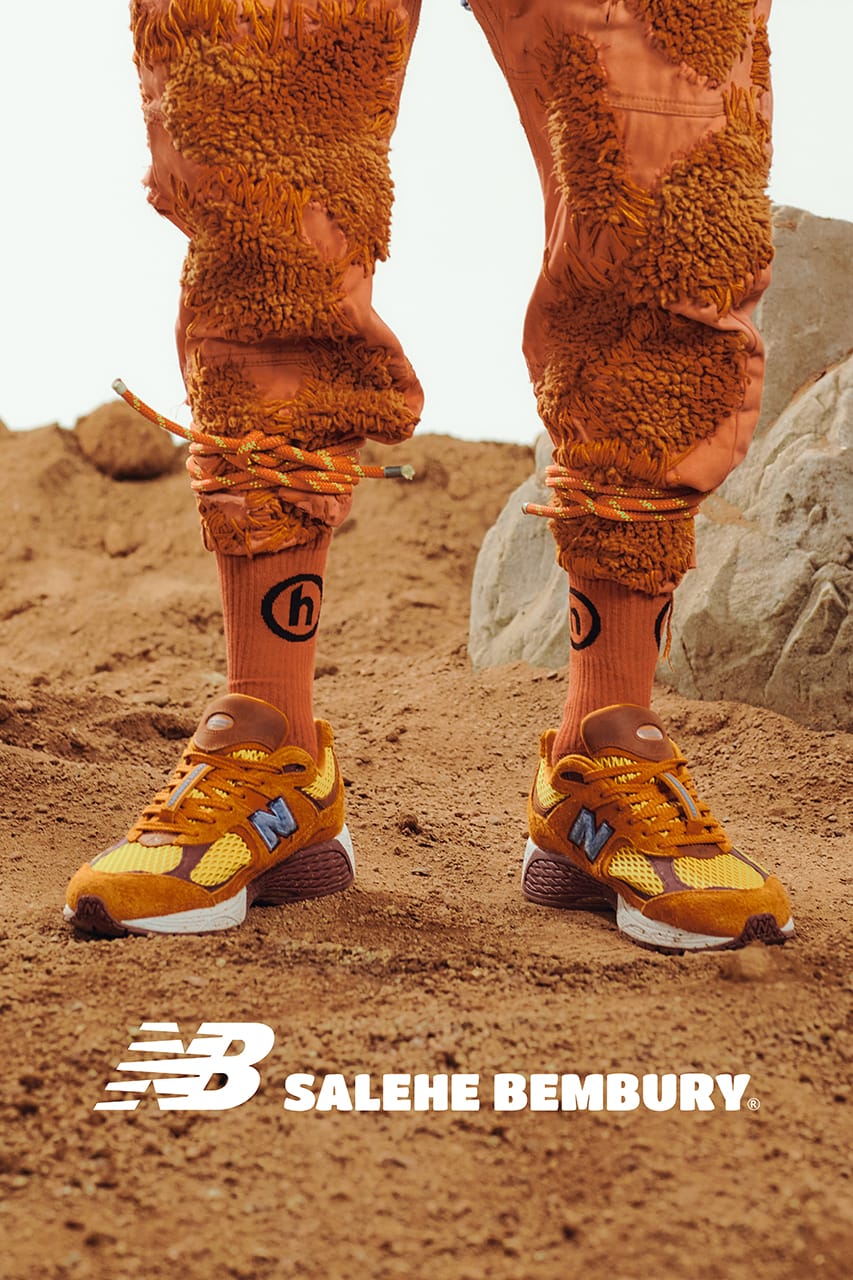 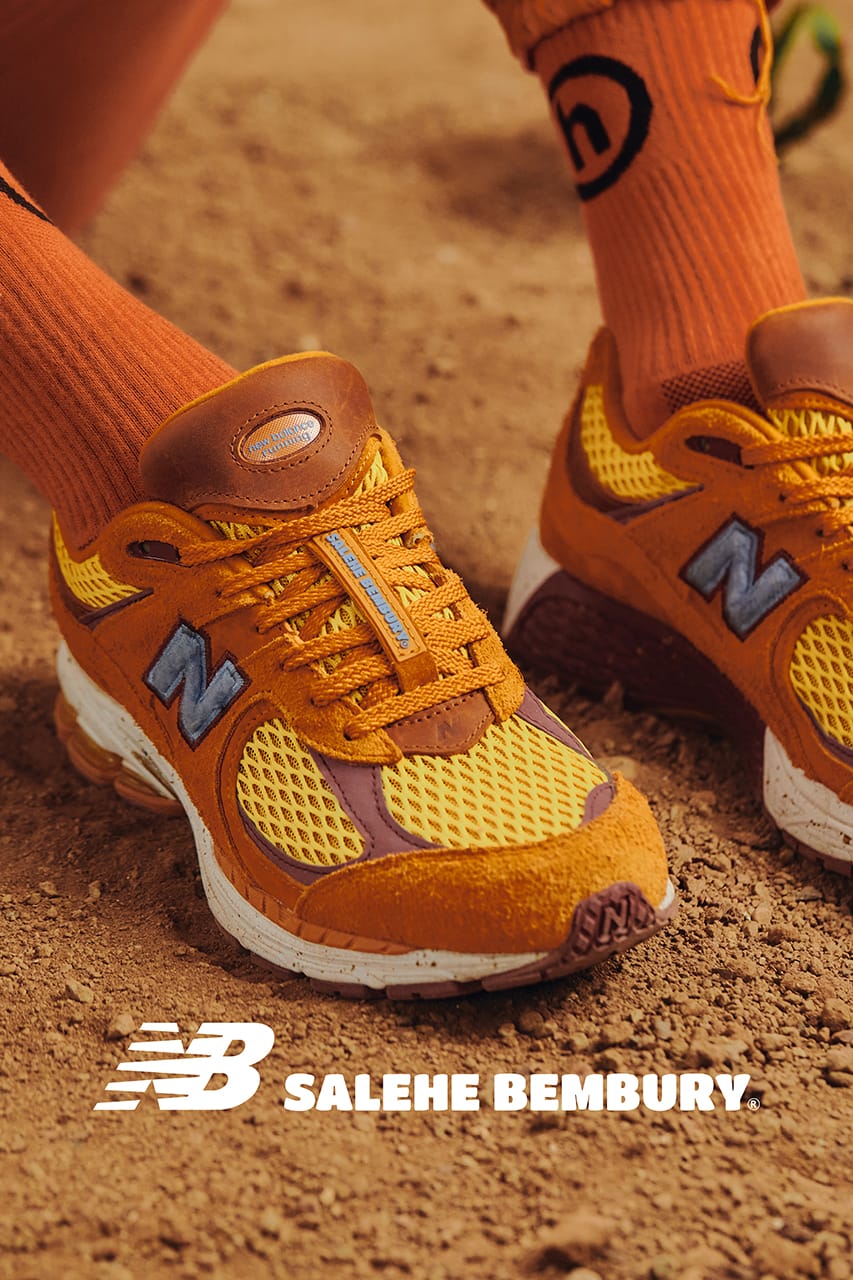 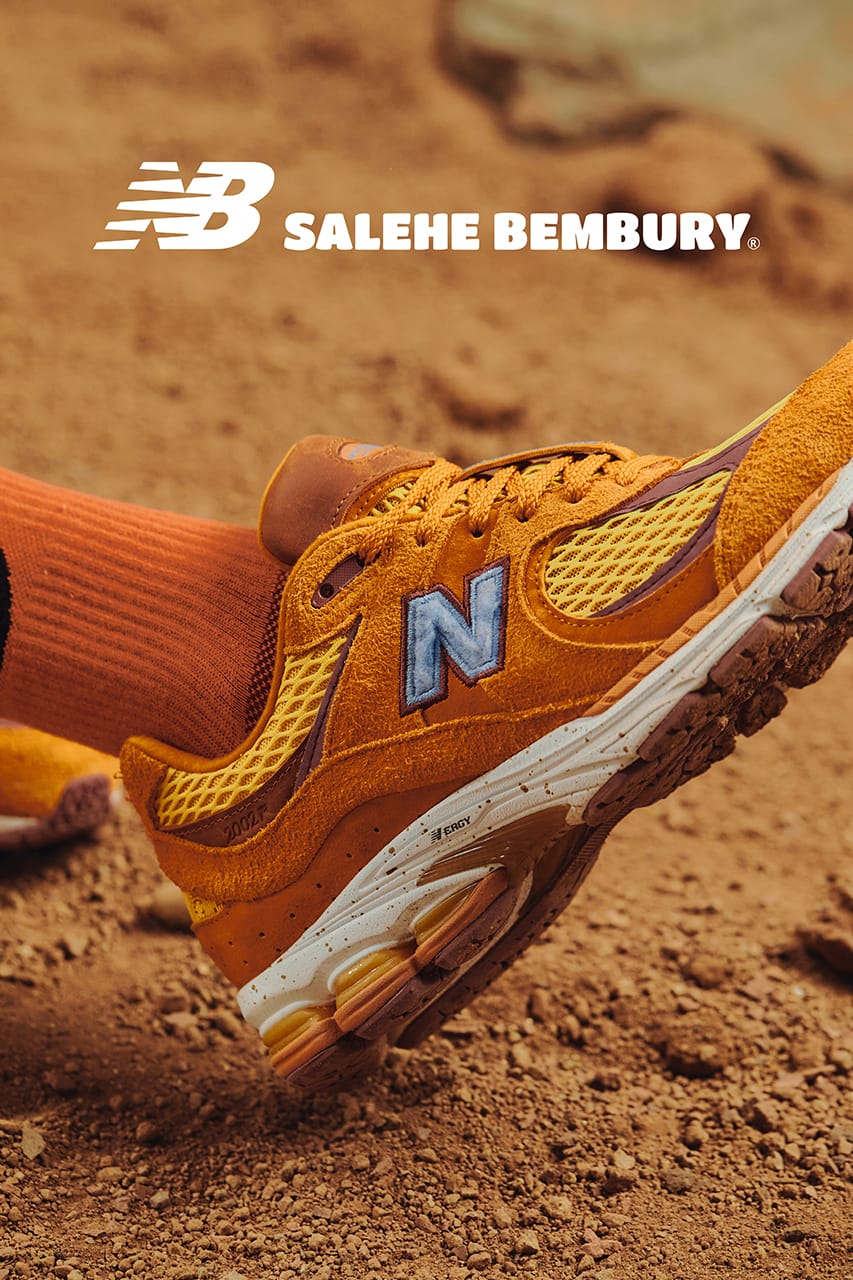 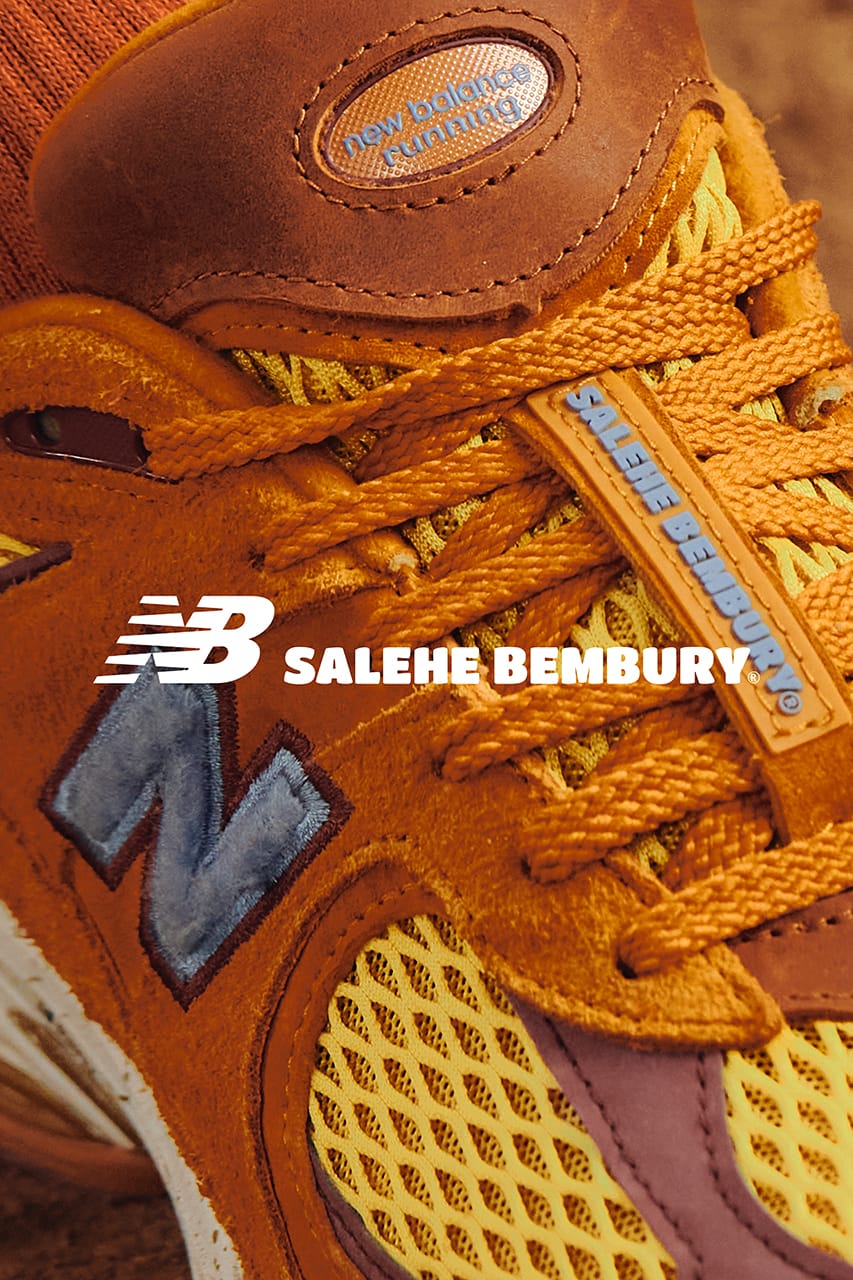 Bembury refers to his shoe as “furry.” It’s an apt depiction: shaggy orange suede covers the majority of the upper, working with a blaze orange mesh and burgundy details. Light blue on the fuzzy shearling midfoot N logo and the throat’s Bembury branding diverge from the swath of bright hues just enough, providing a compelling yin and yang of hot and cold atop an 860v2 sole unit. This mix of materials and attention to detail makes sneakerheads — including this writer — salivate. The shoe is priced at $150 USD as well, roughly 15 percent the price of the Bembury-designed Versace Chain Reaction.

What’s most interesting about Bembury’s 2002, however, is that it’s a shoe made strictly for civilized society, but inspired by the inverse: heading into nature to escape the endless hustle and bustle of city life.

This is, of course, not the first time the lines between the backcountry and the city have been blurred. Over the last few years, outdoor-geared fashion has become somewhat of a luxury,owing to both the quality construction of the goods and the ultimate extravagance that they represent: leisure time, which is becoming increasingly scarce thanks to America’s work-until-you drop (and then work some more) culture. Asked if outdoor gear and what it represents is a luxury, Bembury pauses for a moment. “If you describe having the time to be physically active as a luxury, I would agree,” he says. “However, I would categorize physical activity, in this case outdoors, as necessary for maintaining a healthy body and mind.”

“Problem solving through design is a right, not a luxury.”

His musings on general health and wellness expands to trail gear as well. “Outdoor fashion is not exclusive to the outdoor recreator. Having a jacket that fits in your pocket or a water-resistant hood is something anyone can benefit from. Problem solving through design is a right, not a luxury.”

Bembury fully believes that everyone wants — and can use — highly functional clothes. “Outdoor gear lives within function. Function will never go out of style. Who doesn’t want more pockets? Who couldn’t use a little more traction on their shoe? Why wouldn’t you want to be more visible with reflective details? Why wouldn’t you want a solution for rain or wind? Similar to the new opportunity that collaboration creates, it is the union of fashion execution and outdoor problem solving that yields a new opportunity that has yet to be fully explored.”

And with his first-ever New Balance collaboration releasing on October 23, Bembury is striking out on that path less traveled, attempting to find the perfect balance of form and function. He may have gone from New York to California, from YEEZY to Versace, but he’s still taking a moment to soak it all in, and enjoy the fruits of his labor while looking ahead. “The great equalizer is time,” the designer says. “We all have the same amount of it, but we all use it differently. I believe our individual journeys are all on a road to peace.”