A MUM claims a cruel stranger sent her a "vile" letter branding her garden "the worst one on the whole estate".

Joanne Partridge, 32, was at her home in from Telford, Shropshire, with her two-year-old son Jenson on Friday when a stamped envelope landed on her doormat. 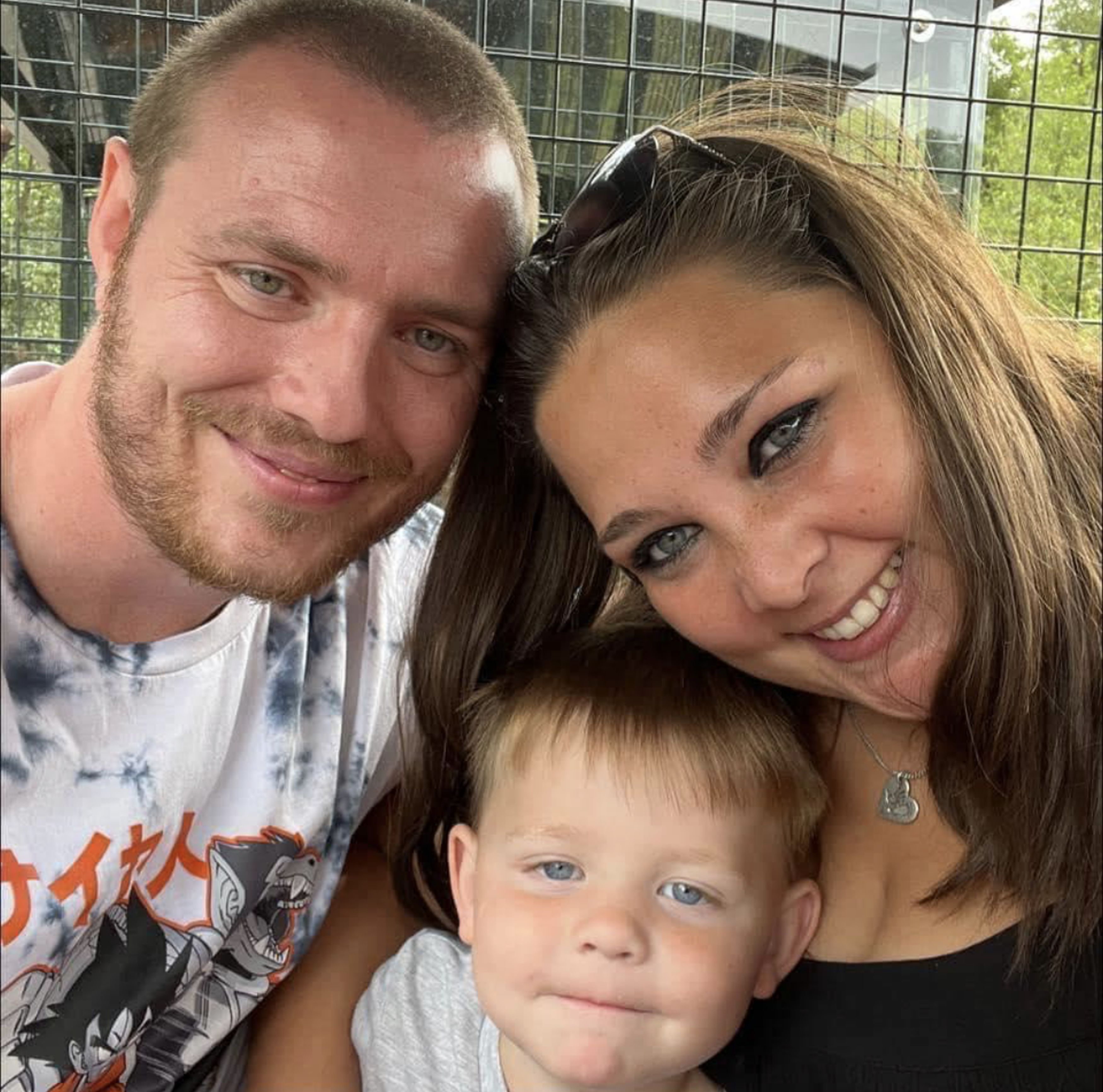 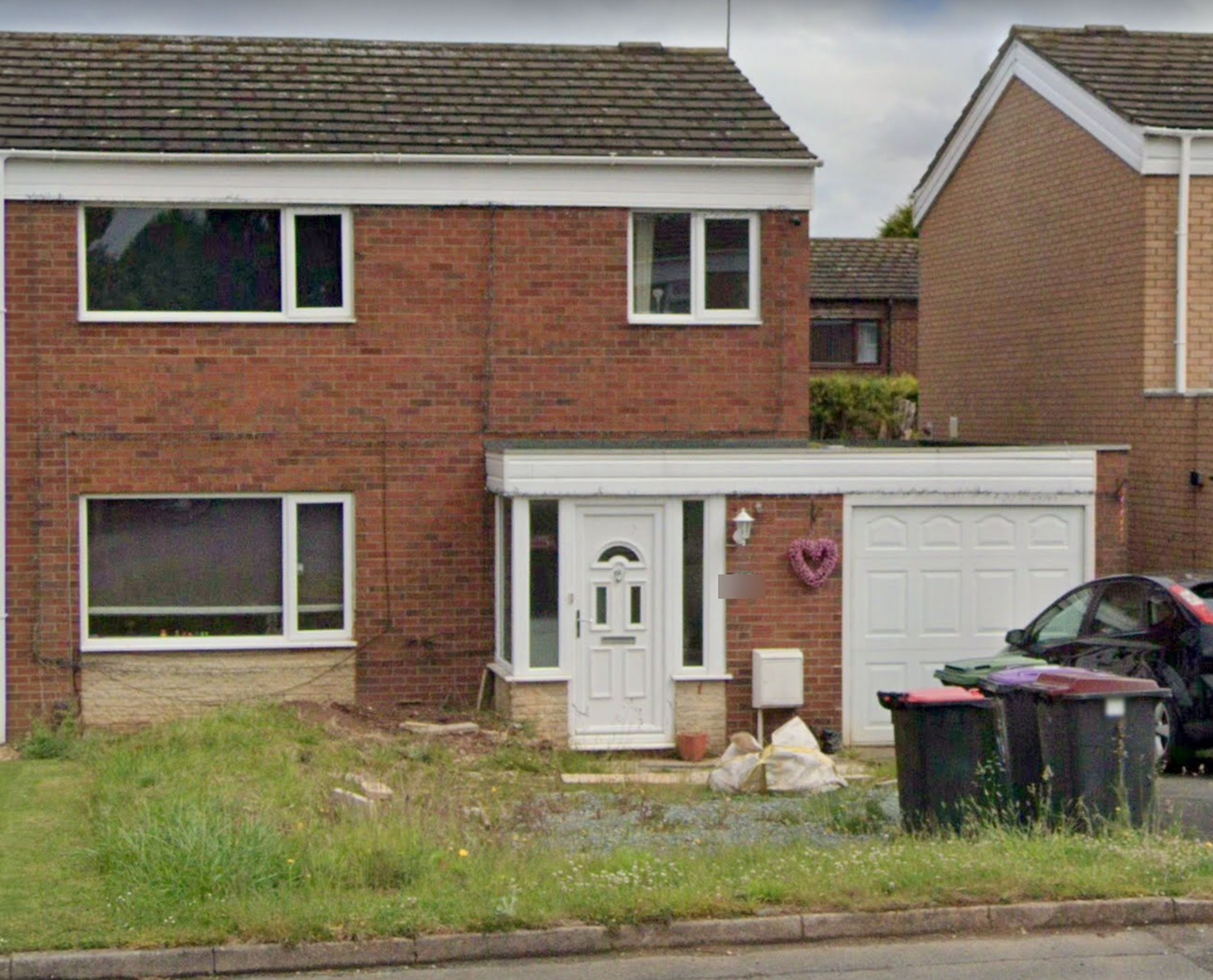 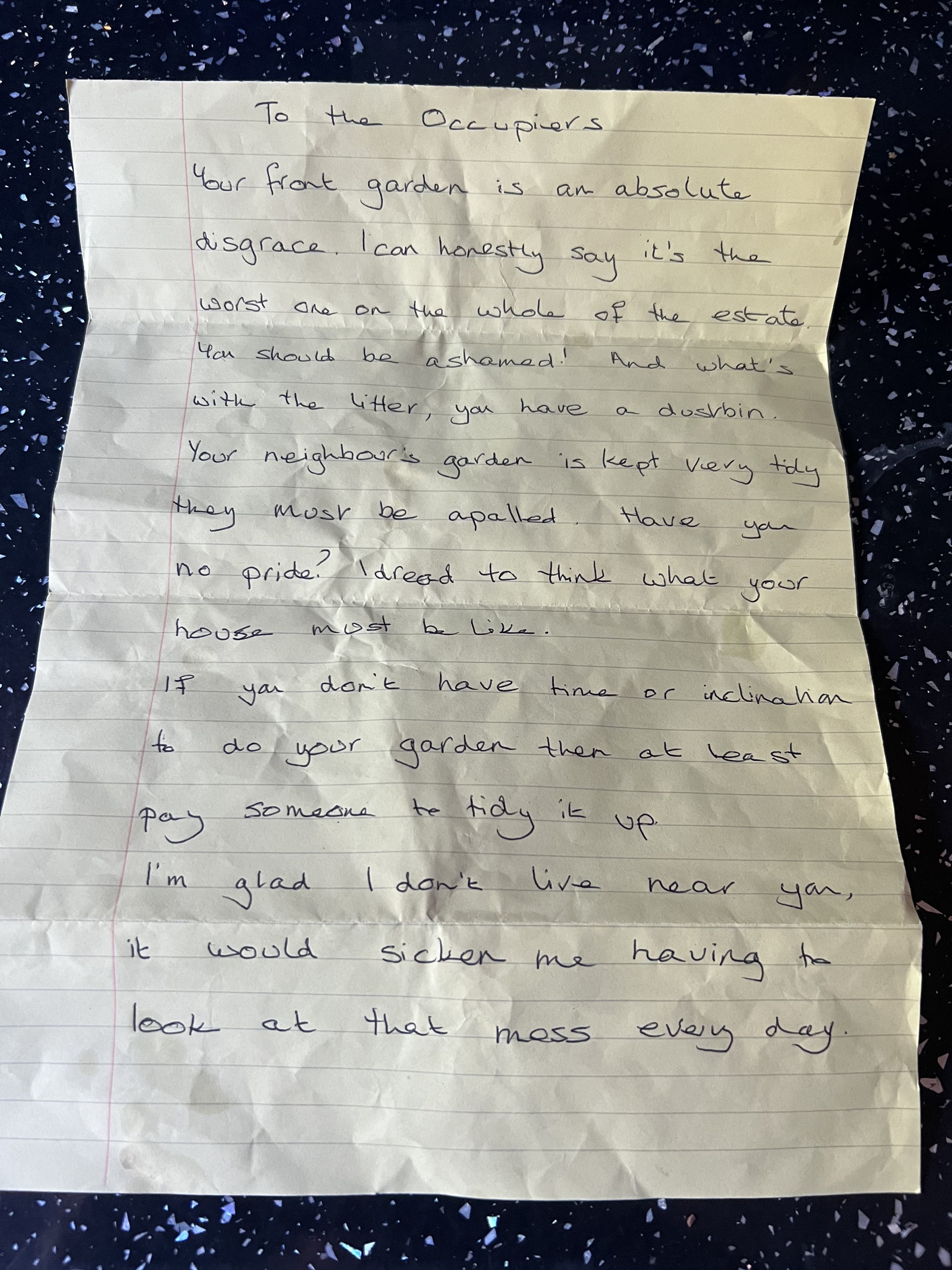 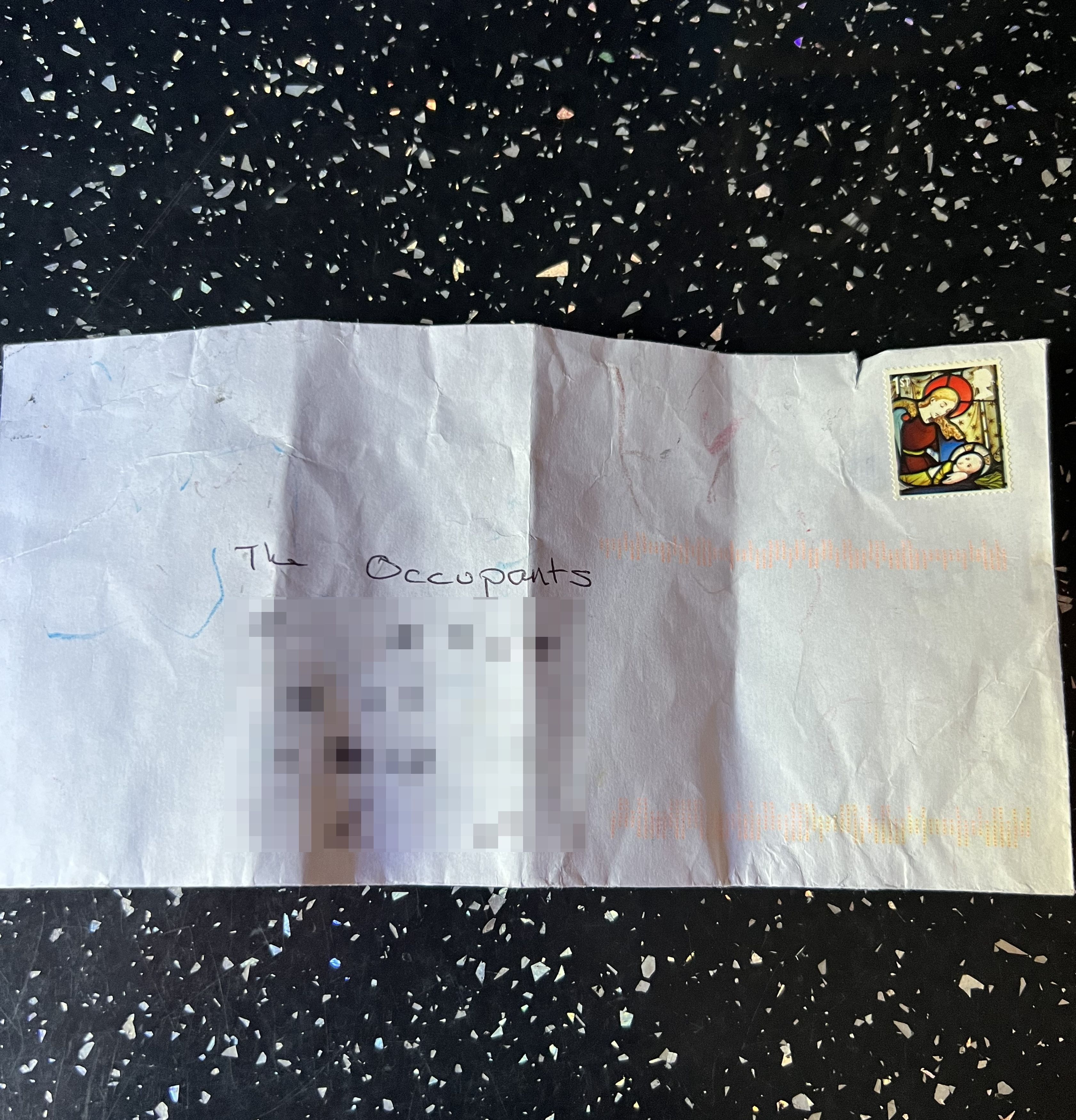 She then opened the letter after realising she didn't recognise the handwriting to find a note complaining about the sight of her front garden.

The letter accused her of having litter in her garden, which she denies, before boldly asking "have you no pride?".

Joanne and her husband Andy, 34, were urged to hire a gardener, with the writer even claiming they would be "sickened" by the sight of it every day.

The couple bought the house five years ago and began work on the front garden two years ago but were working on it "slowly but surely" due to the time and costs involved. 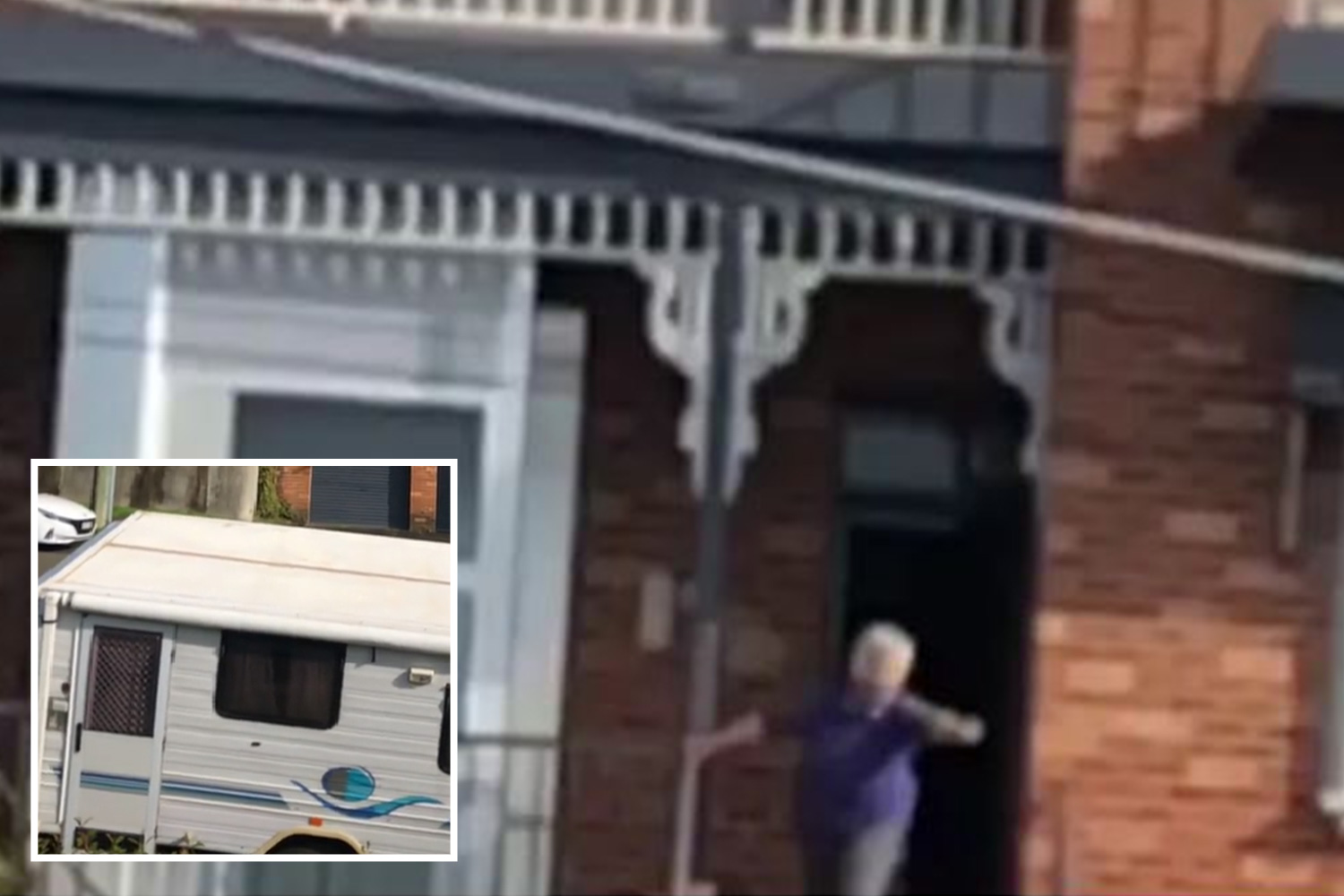 Raging homeowner explodes at neighbour over caravan – but who’s right?

But Joanne said they were not rushing as they did not think it was causing any problems – admitting that it was "unsightly" but not dirty.

Joanne has since shared the note on social media and hopes it encourages others to think twice – revealing the work is "not cheap".

She said: "We're good neighbours and I'm absolutely gobsmacked. I don't know if I'll ever find out who wrote it.

"On Friday, I was just inconsolable. It's cruel. It still blows my mind every time I look at the letter with the stamp on it.

BBC Breakfast viewers have a big complaint about host's outfit

"I stood in the kitchen, read it and I sat on the floor and sobbed. I'm embarrassed to say I didn't just laugh. I cried."

Joanne spent the weekend wondering who could have sent the note – concluding it wouldn't be any of her immediate neighbours.

The couple bought their house five years ago after an elderly person who passed away had struggled to maintain the garden.

Long wild grass was sprawled across the front of the home and the couple wanted more room for their cars.

Their plan was to dig everything up and Andy was going to get the materials and have a go at block paving himself.

"To the occupiers, Your front garden is an absolute disgrace.

I can honestly say it's the worst one on the whole of the estate.

You should be ashamed! And what's with the litter, you have a dustbin.

Your neighbour's garden is kept very tidy they must be appalled.

Have you no pride? I dread to think what your house must be like.

If you don't have the time or inclination to do your garden then at least pay someone to tidy it up.

I'm glad I don't live near you, it would sicken me having to look at that mess every day."

Joanne said: "He started it two years ago. We kept having to hire skips and we filled three in total. It was £95 a time.

"It's a big area so it was always going to be a slowly-but-surely job until we had the time and money.

"We focused on the back garden this year for our little boy and the front's been on hold for a while. It's not cheap, even doing it yourself.

"We're nowhere near finished but he's made a good start and at the moment the front garden is soil, grass. It's unsightly but it's not dirty.

"It's not got rubbish in it and it's not attracting rats. There's no dirty nappies or mouldy old fridge freezers. There's nothing like that."

Joanne says she has no idea what they're talking about with the litter.

"I know there are worse things going on in the world but that really got me.

"It's so vile and to not have the courage to put who you are." 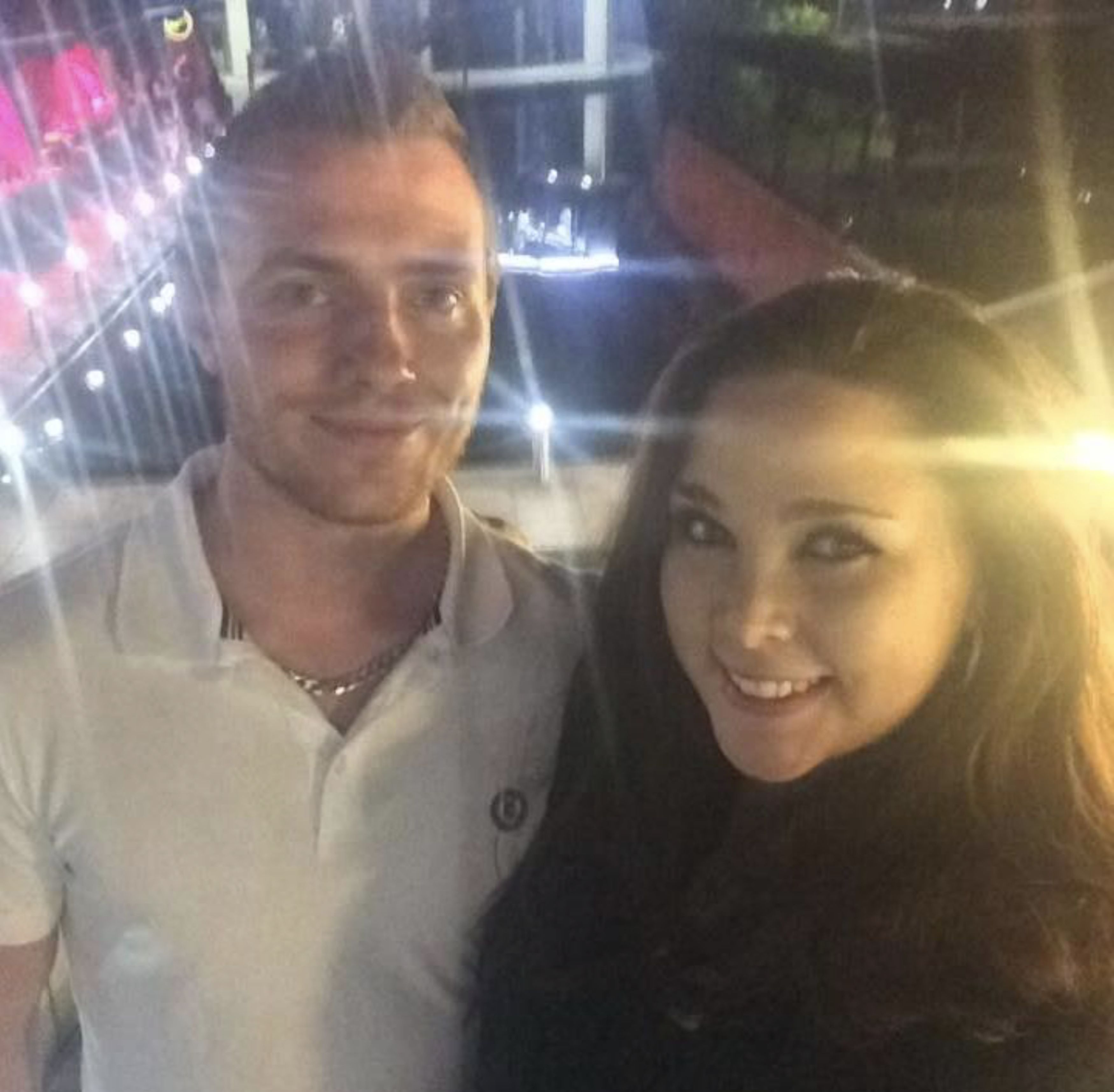 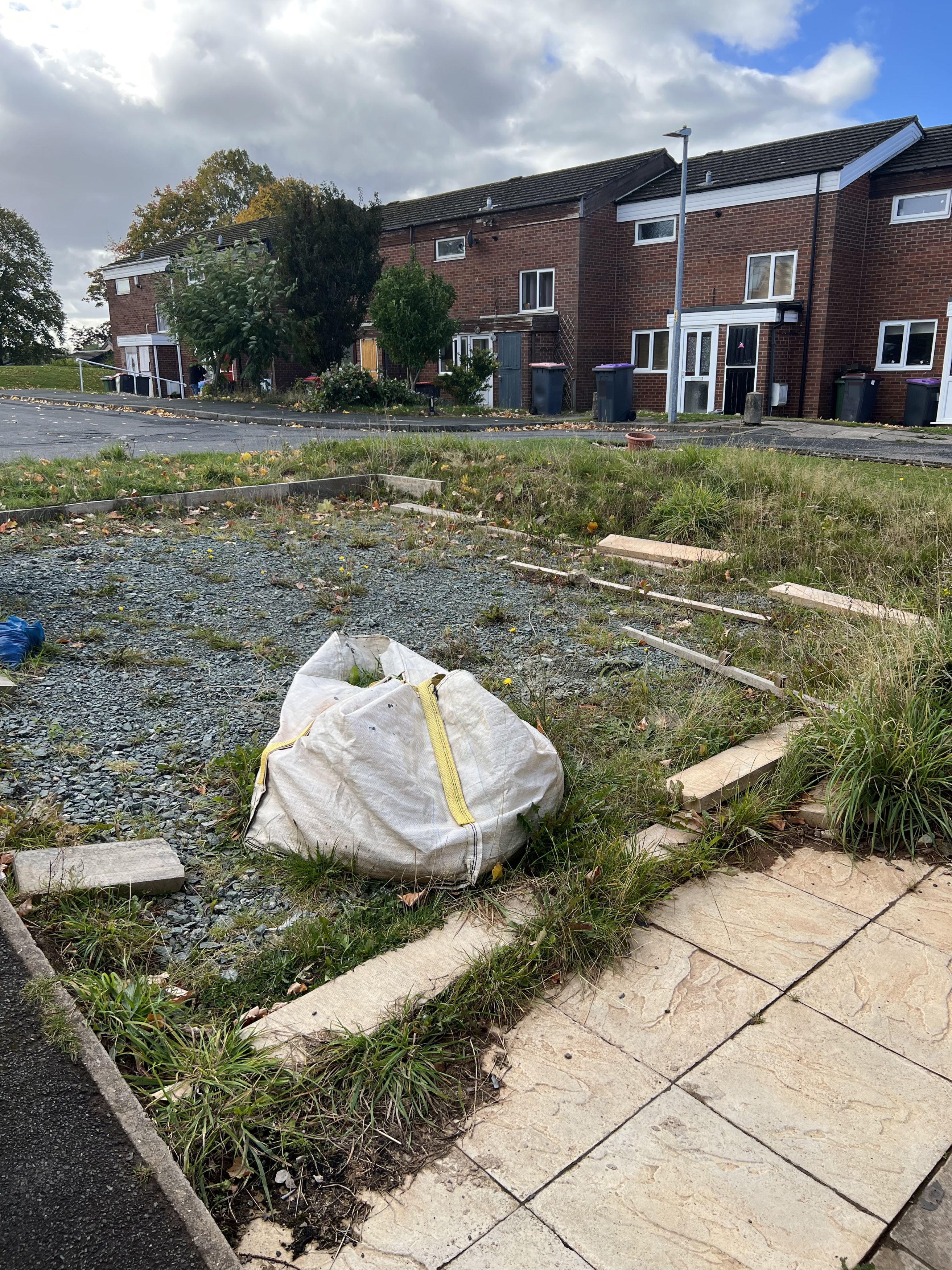