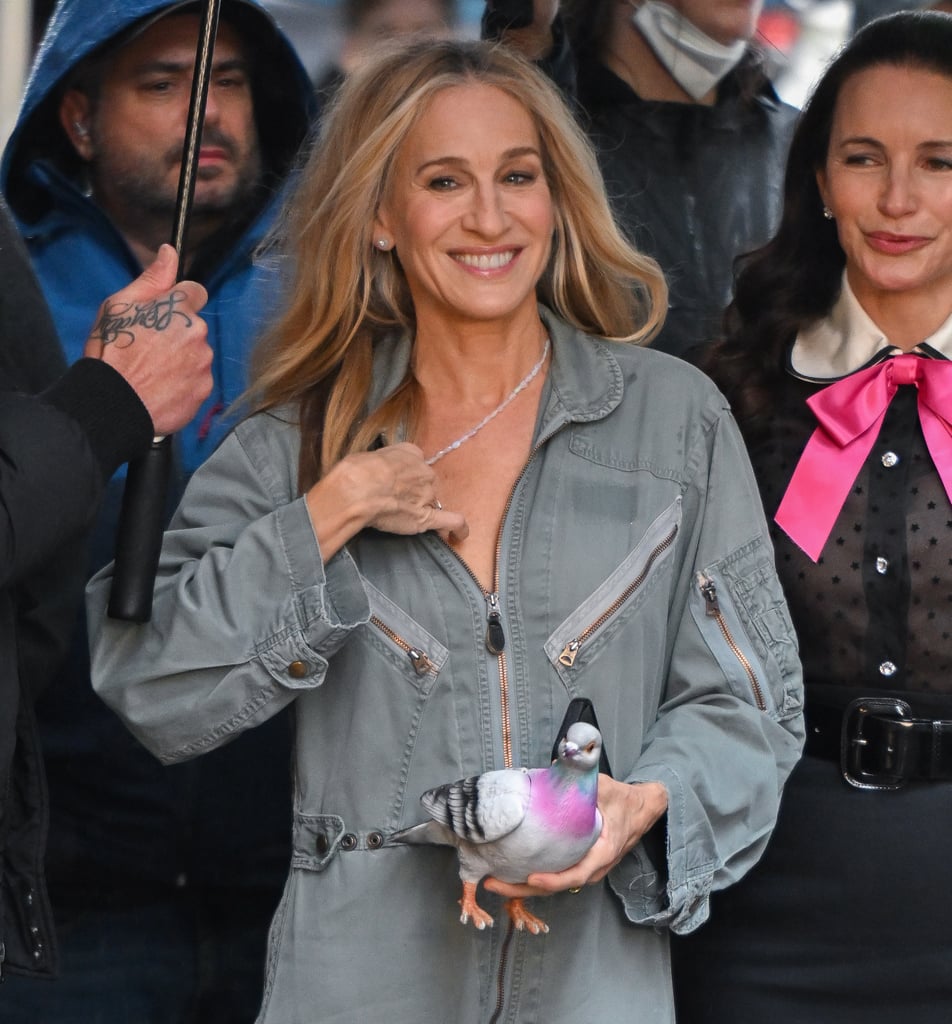 If anyone can make JW Anderson’s pigeon clutch feel wearable, it’s Carrie Bradshaw. On Oct. 5, Sarah Jessica Parker was spotted toting around the unusual handbag while filming “And Just Like That” in New York City, offering fans a first glimpse at her character’s eclectic style in the show’s forthcoming second season.

Shaped like a life-size pigeon, the 3D-printed resin bag hails from JW Anderson’s fall 2022 collection and looks so realistic, onlookers may have assumed Parker plucked an actual bird from the nearest trash-strewn Manhattan curb before acting in the scene alongside costar Kristin Davis. Now that would really solidify Carrie’s status as queen of the Big Apple, wouldn’t you say?

Over on Instagram, the “And Just Like That” costume designers teased Carrie’s kitschy purse by sharing an up-close look of her outfit for the first exterior day of shooting season two. The look also features a zip-up jumpsuit that’s actually a US Air Force flight suit from the ’60s, refurbished and upcycled by British fashion activist and Converted Closet founder Kate McGuire. Finishing touches include a silver Fendi baguette anklet, beige socks, and brown gladiator-style Dior heels, just like the ones Carrie wears throughout the original “Sex and the City” series and in the franchise’s first film.

In the comments, dedicated fans were quick to point out how Carrie’s pigeon purse is a potential callback to the swan clutch Big gave her in “Sex and the City” season two — you know, the jewel-encrusted Judith Leiber design that prompts her to awkwardly drop the “L” word for the first time. She memorably despises the gift back then, but perhaps this is a sign she’s made peace with fowl-inspired accessories following what happened to Big last season?

Symbolic or not, the pigeon bag is an indication that Carrie’s style will remain as quirky as it’s always been — a steadfast element fans can rely on throughout the franchise’s many phases. Plus, it has us wondering what other unexpected pieces the costume designers have snagged straight off the runway for season two . . . maybe Loewe’s enormous bow heels or Balenciaga’s viral trash-bag pouch?

As we wait to see Carrie’s pigeon bag on “And Just Like That” next season, check out photos of Parker casually cradling it on set, and keep reading for a closer look at the JW Anderson design.