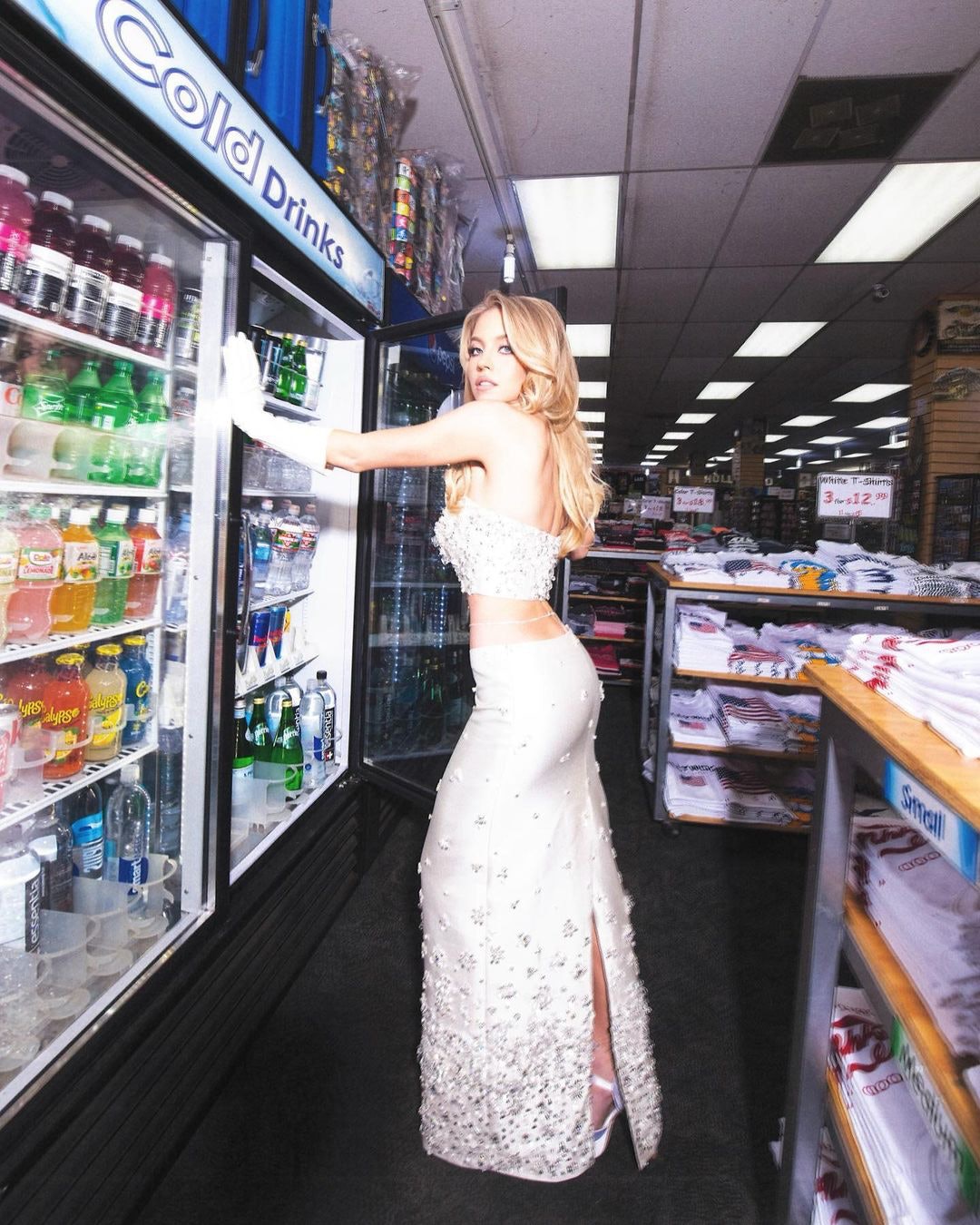 It’s official, bougie markets are on their way out and bodegas are in, at least in the world of fashion. Last month, Bottega Veneta pushed Italian shops and products with their holiday ad campaign “Bottega for Bottegas,” and now Sydney Sweeney is taking that energy over to Los Angeles, where she just staged her second impromptu high fashion shoot at a corner store.

On Wednesday night, Sweeney stepped out for Euphoria’s non-premiere in a custom Miu Miu two-piece set, covered in gorgeous crystal appliques. The current Omicron surge prevented a typical premiere night, which, under normal circumstances would have probably ended at an after party somewhere in the Hills. Instead, HBO halted the evening after the red carpet photo opp, but it seems like Sweeney didn’t want the night to end. So, she grabbed celeb-favorite photography Amber Asaly and headed over to a nearby shop on Hollywood Boulevard. There, the two engaged in a photoshoot around the tourist destination.

The result is a set of delightfully fun and comically contrasting shots. Sweeney looks like a classic ingénue, wrapping herself in a fur stole outside of the Hollywood Wax Museum. Inside the souvenir shop, she uses her Miu Miu gloved hands to show off novelty license plates and to grab a drink from the fridge. Shelves of colorful L.A.-embroidered hats work as a perfect backdrop to show off her all white look, as she dramatically flaunts for the camera. It is the contradiction between Sweeney, in her custom French look and bombshell beauty, up against the everyday monotony of a Hollywood souvenir shop that makes the photos so enjoyable. The actress seems very at ease in the setting, despite the fact that she in no way fits in.

This isn’t the first time Sweeney has found herself overdressed at a corner store. In fact, she’s made it a bit of a habit. Following last year’s Golden Globes, the actress hiked up her pink cloud of a Ralph & Russo dress and headed to the nearest 7-11. That time, lensed by Sam Dameshek, Sweeney sipped on a Big Gulp, while posing on the concrete sidewalk, most likely because she couldn’t get the dress through the door.

There is something so pleasing about seeing a gown-adorned Sweeney in the most pedestrian of places. Probably because who doesn’t have the urge to stuff their face with junk food after a night of squeezing into formal clothes and making small talk? Sweeney is making the move we all wish we could—leaving a night of rubbing elbows with stars to grab a Slurpee and maybe some Oreos, and looking gorgeous while doing it.