THERE'S nothing more satisfying than snapping yourself up a bargain in the sale, especially when it's for a fraction of the price.

And one mum couldn't resist showing off her sale win after stopping by TK Maxx's recent bumper sale and bagging herself a huge saving. 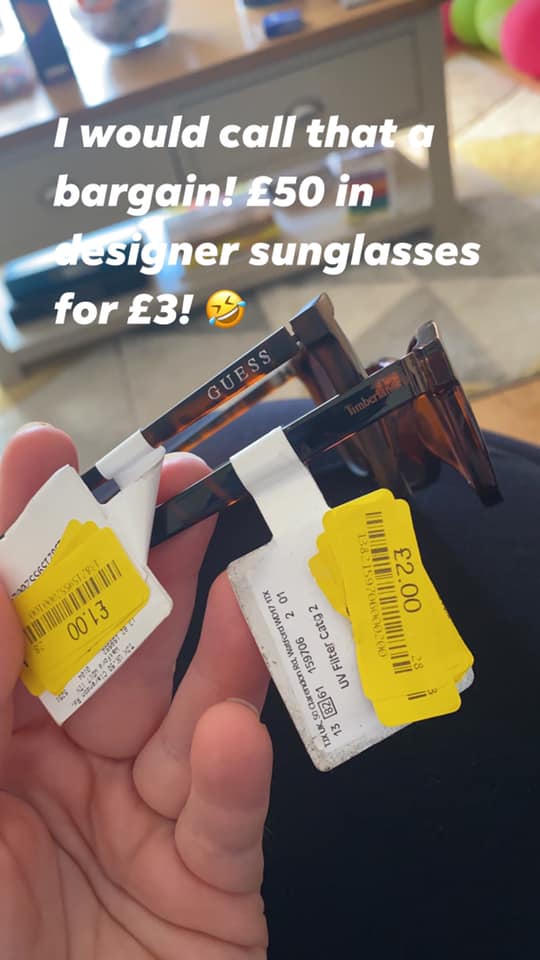 Making the most of what's left of the summer, she headed straight for the designer sunglasses and couldn't believe her luck when she saw just how much the prices of the high-end accessories had been slashed.

Posting to Facebook, she revealed in group Extreme Couponing and Bargains UK group that she managed to find two pairs of designer shades for just £3.

The mum shared a photo of her purchases; a pair of Guess tortoise shell shades that were reduced to £1 and a similar pair of Timberland sunglasses for £2.

She revealed that originally both glasses would have cost £50 – meaning she made a huge saving of £47 and ended up paying less than 10 per cent of the original total.

The mum posted alongside her photo: "TK [Maxx] had a pretty good sale on today!! They also had other majorly reduced items."

Thousands of people liked the mum's post, with hundreds of fellow shoppers commenting how impressed they were with the bargains she found.

One person raved: "I think yours is the best bargain this year well done."

"Wat a bargain.i paid 300 for my guess sun glasses (sic)," commented another.

A third wrote: "Call that a freebie. Great find!"

One shopper revealed they were just as successful in the sales, as they posted: "I got a pair this week for 6 quid and when I googled them they were being sold for 190.00 in an online discount shop."

One thrifty mum shared: "I got my daughter crocs for 70p and my other daughter a bra reduced from £55 to 30p!!"

Meanwhile, one savvy mum stocks up on huge Asda baby clothes haul thanks to mega sale and saves herself over £40.

Plus, a savvy shopper shows off massive Superdrug haul as she bags £183 worth of stuff for just £13.

And mum-of-two who struggled with money saves £1.5k on food shopping and shares her best tips so YOU can too.