She’s one of the UK’s top influencers, with nearly 650,000 followers on Instagram.

But last month Alice Liveing, who gained her following under the name Clean Eating Alice, shocked the world by revealing that at the height of her celebrity she was in the grip of an eating disorder and a dangerous addiction to exercise. 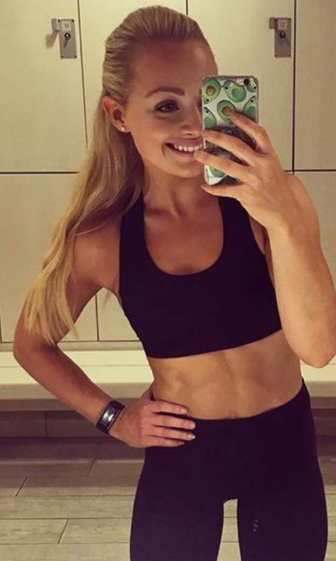 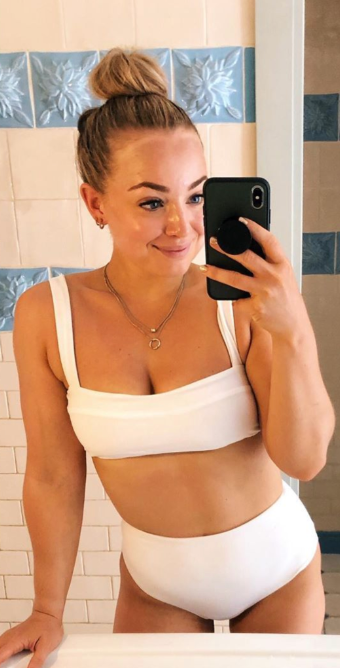 In the post, the 26-year-old personal trainer and author shared a photo of herself from three years ago with rock-hard abs, toned biceps and a tiny waist.

Next to this image was a photo of her body now, where she admits to being a stone heavier and feeling happier and healthier.

Underneath, Alice wrote: “It’s crazy that I thought I was at my healthiest at this point, and actually that couldn’t have been further from the truth.

"It’s sad that I didn’t see at this point how entrenched in obsessing over food and exercise I was. It makes me angry that I didn’t realise how harmful this body can be.”

Back in 2015, when Alice was in the midst of her struggles, she was one of the pioneers of #fitspo.

Today, the hashtag brings up more than 67 million posts on Instagram, accompanied by pictures and videos of men and women working out, eating “clean” and showing off their toned physiques.

But amid accusations of fake posts and links to poor body confidence among young girls, the tide is beginning to turn.

In May, fitness guru and Fabulous cover star Lucy Mecklenburgh – who used to post almost daily #fitspo pictures – shared a photo (left) of her bloated stomach with her 1.4 million followers, revealing that she kept quiet about her gut issues for 10 years for fear it might be a bad advert for her health and fitness business.

Talking exclusively to Fabulous, Alice admits that striving for the perfect body led to irregular periods, fatigue and an obsession with exercise.

“I got so caught up in working out all the time to look a certain way,” she says. “It became my whole identity, and every time I posted a picture I’d get thousands of likes and comments from people saying I looked amazing. It was the validation I craved.

“I was also very competitive with other fitness influencers who had ripped abs and tiny waists – if I wanted to be at the top of my game then I thought I needed to look just like them.

"I was completely consumed by being as muscular and tiny as possible, but my body fat was so low that my periods became irregular, and I was sleepy and groggy. 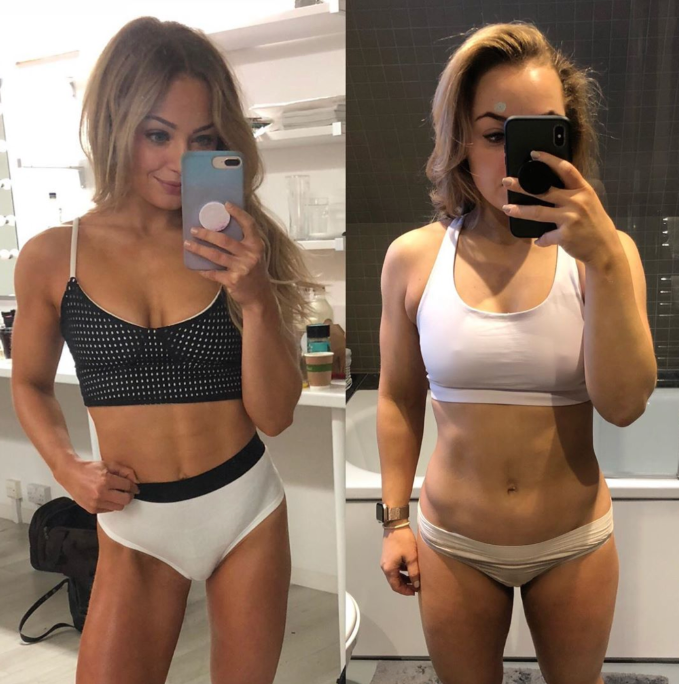 “At the time I felt focused, but I eventually realised that I wasn’t happy any more and that I had a responsibility to be real with the people that looked to me for advice.”

Alice says she still feels guilty about any damage she may have caused her followers.

“Social media is a different place now. There’s a wave of people being more open and honest, so it’s a much more refreshing place and I think we’ve all learned our lesson. I still feel guilty for promoting that body shape as healthy.

"I worry about it a lot and the damage I could have done to others. That’s one of the main reasons why I shared such a candid shot last month – I’m trying to undo any harm I might have done. Having ripped abs doesn’t necessarily mean you’re happy or healthy.” 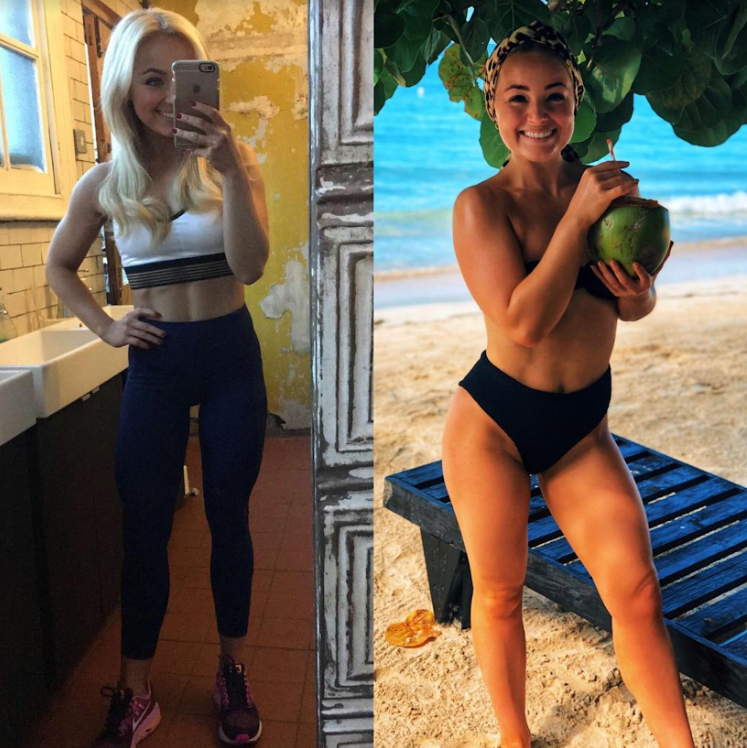 The new anti-fitspo movement couldn’t have come soon enough. A survey by the Mental Health Foundation revealed that 22% of adults and 40% of teenagers confessed that social media caused them to worry about their body image.

Meanwhile, recent research from the University of West England found that students shown #fitspo images scored lower on body positivity than those who were asked to read inspirational quotes.

On top of this, psychologist and author John-Paul Davies says that it’s possible viewing fitspiration posts could cause bulimia, anorexia, body dysmorphia and even suicidal thoughts.

“By looking at these ‘perfect’ images we may become disconnected from our own bodies, even beginning to see them as repulsive and hateful because they don’t fit with what we see online.” 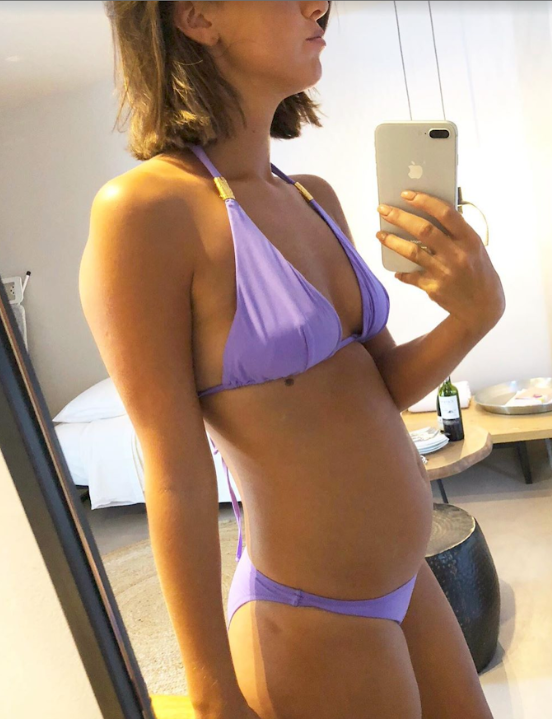 For personal trainer Aimee Long, 26, from Yorkshire, trying to look like her fitspo idols led to obsessive exercise, an eating disorder and laxative abuse. She joined Instagram in 2014, and at the time she weighed 10st at 5ft 2in.

“I’d scroll through Instagram constantly and followed lots of Australian influencers who would pose and work out in bikinis.

"They also documented the healthy foods they said they ate and their meal prep and exercise regimes, as well as before and after photos as they trained for fitness competitions. Some also posted about taking laxative teas and fat-burning pills, so desperate to look like them, I did the same.

“I’d stare at their perfect bodies for hours and would work out like crazy in the hope that my abs would be ripped or that I’d get a thigh gap, too. In my pursuit to eat ‘clean’, I became obsessed with the nutritional content of food. 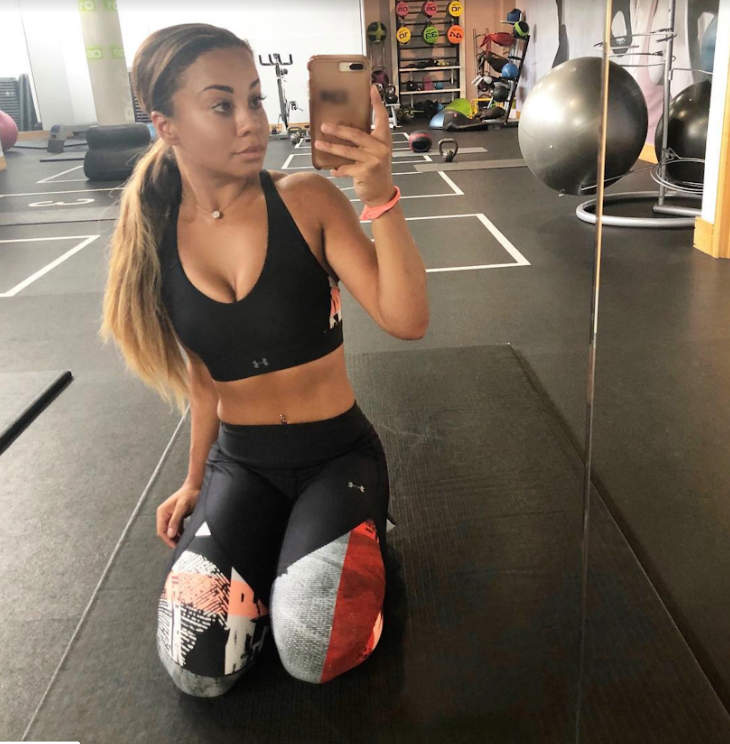 "Even fruit was no longer on my ‘allowed’ list – most days I was just having a green juice and coffee. Then, one day I had a panic attack after checking the sugar content on a small tub of pineapple.

"These ‘perfect’ girls on Instagram said they wanted to inspire women like me to be fit and → healthy, but they made me feel like a fat failure because no matter what I did I couldn’t look like them.”

By 2016, Aimee was working out for two hours at least four times a week.

“If I ate chocolate, I’d go back to the gym and spend an hour on the treadmill trying to burn it off. On the advice of the influencers I also started meal prepping and would eat only chicken and veg for days on end.

I took laxatives, diet pills, hunger suppressants and would secretly wake up in the middle of the night to make myself sick

"When I felt I wasn’t losing weight any more, I took laxatives, diet pills, hunger suppressants and would secretly wake up in the middle of the night to make myself sick,” she admits.

Aimee’s weight soon dropped to 8st 7lb, and in June that year, after seeing her becoming more and more obsessed with her diet and exercise regime, her worried parents intervened.

They forced her to see an eating disorder specialist to deal with her mental health issues, including orthorexia – an obsession with healthy eating.

Aimee resisted treatment for six months before her therapist finally managed to help her to see that she had a problem. She upped her calorie intake and started cognitive behavioural therapy (CBT).

Now she has been in recovery for a year and has deleted all of the fitspo accounts she used to religiously follow. She’s since used her experiences to campaign for more genuine and candid fitness content to her 70,000 followers.

“Most influencers aren’t going to admit the extreme lengths they’ve gone to for their bodies,” she says.

“Not only are they not being true to themselves, but it’s so harmful for the women following them and struggling to get the same results.

“I even think a lot of them doctor their photos to make themselves slimmer. I know what these fake posts did to my self-confidence and that’s why I’m now determined to be totally honest. I tell the truth about what I’m eating, how I’m training and if I’m feeling down or sick.” 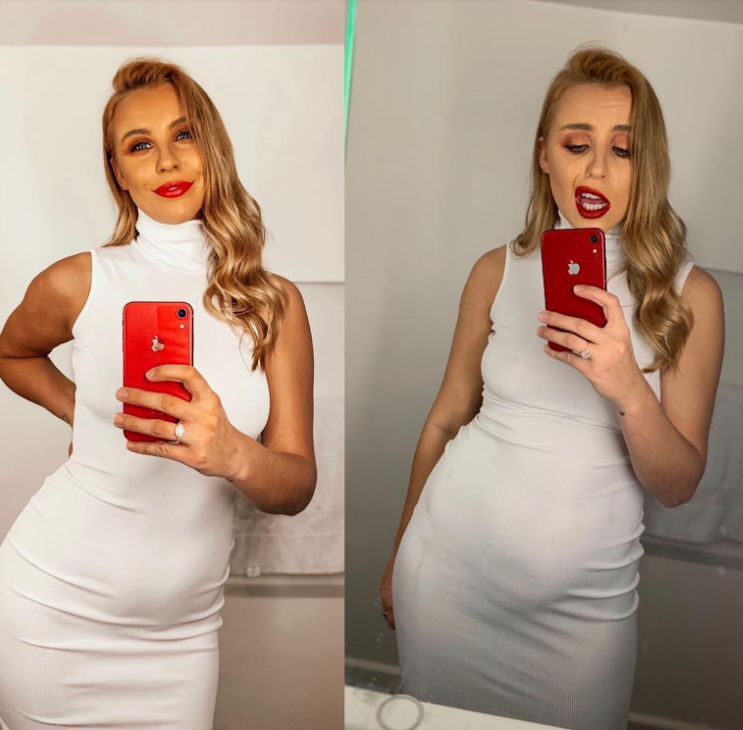 Like Aimee, Sara Tasker, an Instagram expert and writer, also believes that many of these fitspo images have been heavily edited.

“When it’s your business to look good, you can’t afford to have human flaws, especially as the industry gets more and more competitive,” she says.

“On top of going to extreme physical lengths to get these bodies, I believe that around 60-70% of the popular fitspo posts I see on Instagram have been subtly edited – drawing the waist in here, adding a little curve there. 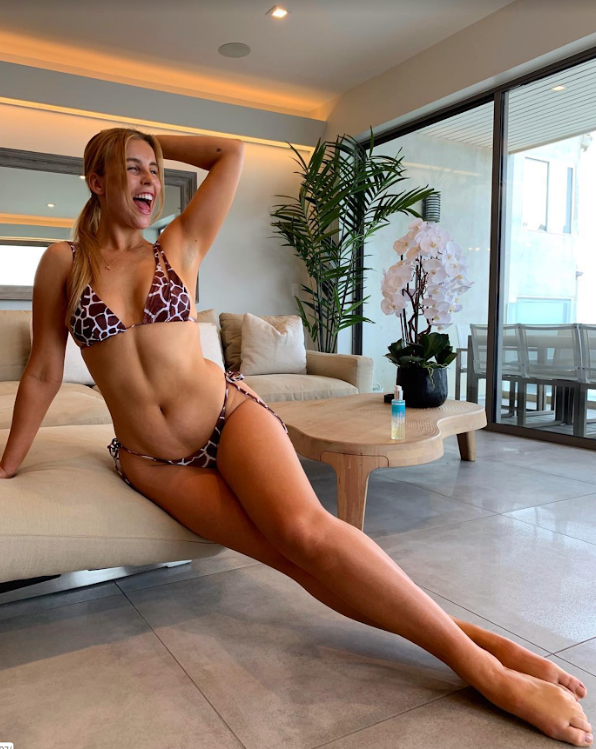 "There are smartphone apps that will give you impossible proportions in a single click. The worrying thing is that there will be comments below these photo from women admitting this is their ‘body goals’.”

Even Beyoncé – who recently endorsed a paid-for diet and exercise plan, which she claims to have followed to get her post-baby body ready for Coachella last year – has been accused of doctoring photos to make herself look slimmer.

In 2015, fitness influencer Essena O’Neill was one of the first influencers to publicly quit Instagram, appearing on camera in tears to reveal that many of her posts had been “contrived” and that she often “starved herself for days” to get a flat stomach.

“Stomach sucked in, strategic pose, pushed-up boobs. I just want younger girls to know this isn’t candid life, or cool or inspirational. It’s contrived perfection made to get attention,” she wrote, admitting she made thousands of pounds per post from clothing brands. 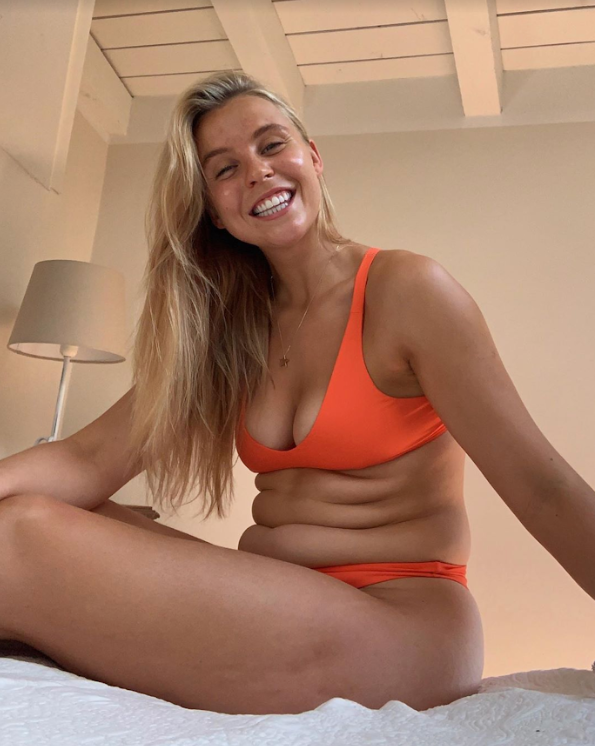 Since then, dozens of fitness influencers have either quit or changed the way they present themselves on social media.

In 2017, after suffering panic attacks, Sophie Gray stopped posting pictures of her body and lost 70,000 followers. And British influencer Chessie King, who has half a million followers on Instagram, is one of a new wave of social media stars leading a backlash against fake pictures and pioneering a “real fitspo” movement.

Many of her “Insta V reality” posts showing off her tummy rolls and cellulite have gone viral for their honest portrayal of a woman’s body.

Chessie, 26, explains: “It takes a lot to be brave enough to post a real photo, and I was apprehensive at first, but I had such an amazing reaction from my followers.

Now I don’t think twice about showing my wobbly bits because I know it’s helping people. I’m not unhealthy – I diet and exercise – but the reality is most women have rolls when they sit down and cellulite on their bum. I think it’s extremely important for people with a following online to understand their responsibility.”

Alice is also more considered about what she puts out to her followers, and has vowed to be more honest in her posts.

“I’m at a point where I realise that a dose of realness is what we all really need. I want to help my followers feel good about themselves, not worse. We need to see people as they are so that we don’t live in a state of striving for a perfection that doesn’t actually exist.”