Children of diplomats are usually accustomed to pulling up roots, so jumping rather than easing into a relationship can seem practical.

This may help explain why Christine Chang packed her bags to go away for a weekend with Josh Mateo before they had gone on a single date.

“I was so into Josh that even though he could have been a serial killer, I didn’t care,” said Ms. Chang, the daughter of Wei-ta Chang, a deputy director-general of Taiwan’s Foreign Ministry and the former consular general to Hamburg, Germany, and Munich. “I knew we were going to have a great time.”

She was reasonably sure his record was homicide-free, too, based on his behavior around colleagues and his appreciation for baked goods. 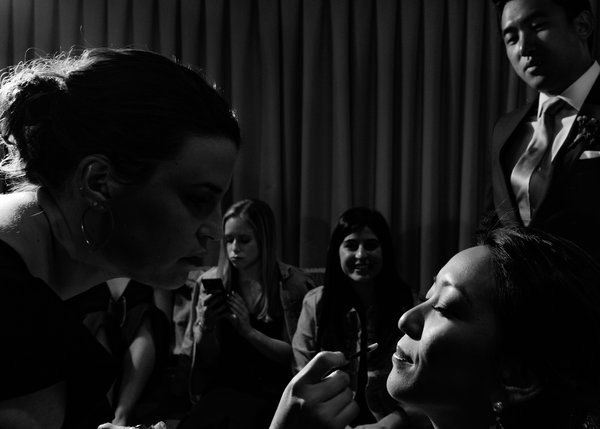 Ms. Chang and Mr. Mateo met as office mates at the Barbarian Group in Manhattan two months before their get-to-know-you getaway, in the summer of 2012. Ms. Chang, 28, had recently graduated from Cornell and was working as an intern at the marketing agency. Mr. Mateo, 30, was a year into his first job as a designer after graduating from the Rochester Institute of Technology in 2011.

Both liked company culture enough to mix business with pleasure.

“We had a usual crew of half a dozen people we’d go out to lunch with, and then we’d go out at night as a group of 10 or 20 people to parties,” said Mr. Mateo, a product designer who recently left his job on the central design team at Spotify to accept a design system lead position at Netflix.

Group coffee outings also happened regularly. After Ms. Chang mentioned her love of the salted chocolate chip cookies at the coffee roastery La Colombe, Mr. Mateo, who was attracted to her easy laugh and wavy-haired beauty, made a practice of buying one for her daily, dropping it at her desk.

Ms. Chang didn’t assume the treats signaled a crush. “I thought we were just friends,” she said.

That the cookies were a flirtation device started sinking in when, on a Friday afternoon in August, Mr. Mateo asked Ms. Chang to spend the weekend with him in Avalon, N.J., at his parents’ beach house. To avoid seeming creepy, he said she should ask a mutual friend, a fellow intern, to come along. She did. But the friend declined, citing concerns about feeling like a third wheel because the pair had obvious chemistry.

So Ms. Chang made the decision to go alone, which, according to her older brother, Jochen Chang, was not out of character.

“We became really accustomed to knowing how to be versatile in our childhood,” said Mr. Chang, a Chicago financial adviser. “Christine was born in 1990 in Germany a few months after the Berlin Wall fell, at a time when borders were going away and people were moving freely. That attitude of freedom and movement was instilled in her.”

This mind-set followed her to the cities in which she and her brother grew up, like Taipei, Taiwan; Jakarta, Indonesia; and Washington.

The family, including Ms. Chang’s mother, Wei-Chia Hsueh, moved every three years, following Wei-ta Chang’s diplomatic work. (Such intervals are typical for diplomats, though the spectrum of countries the Changs might have lived in was not. Because Taiwan, a self-ruled democracy that Beijing considers Chinese territory and because of Beijing’s “one-China” policy, Taiwan has only a few full diplomatic missions abroad.)

Ms. Chang and Mr. Mateo’s weekend sojourn started with a Greyhound bus to the Jersey Shore, during which earned them icy stares from fellow passengers. “We talked the whole bus ride. Everyone around us wanted to kill us,” Ms. Chang said. In Avalon, they kayaked, biked, roamed the beach and watched the Summer Olympics with John and Randee Mateo, Mr. Mateo’s parents, and his older sister, Ashley.

“I think by the end of that weekend we knew it was a slam dunk,” said Mr. Mateo, who grew up in Medford, N.J., and whose parents now live in Collingswood, N.J.

Back in Manhattan, they deepened the grooves of their new relationship. After work, “we would hang out for a few hours, then I would walk Christine all the way from the Battery Park area to Penn Station so she could go home,” Mr. Mateo said. Ms. Chang was living with an aunt in Roslyn, on Long Island, while looking for an apartment. Mr. Mateo was living with a roommate in Brooklyn.

Six weeks later, though, came a jolt of real life. Ms. Chang’s mother, then living in Germany with her father, needed help recuperating after major surgery, a result of Crohn’s disease. With her internship at Barbarian nearing its end and without a new job lined up, Ms. Chang volunteered to do what she was accustomed to doing: She uprooted herself, this time to help her mother.

Just before she boarded her plane for Germany, the couple had what Mr. Mateo called an open-ended conversation.“I was like, ‘Obviously I feel really deeply for you. Things are so in the air, why don’t we play it by ear,’” he said.

Ms. Chang agreed. And then they started talking, via Skype, every day. Three months later, when her mother was stronger, Ms. Chang booked a return ticket to New York, ready to pick up where she had left off with Mr. Mateo.

“I was so worried that the chemistry wouldn’t be the same,” she said. “I had told Josh that I wasn’t coming back just for him, but I was 100 percent coming back for him.”

In late 2012, on her L-train trip to reunite with Mr. Mateo at the restaurant Five Leaves in Brooklyn, Ms. Chang was nervous. “My heart was pounding,” she said. Then “all my doubt went away when I saw him walking down the street. I knew with great clarity he was the one I wanted to spend the rest of my life with.”

That moment of clarity was held aloft by an instinct they shared to let the world spin, ignoring its borders and boundaries. Since his first trip abroad to Israel as an 8-year-old, Mr. Mateo has been committed to exploring, one country at a time. Ms. Chang knows the value of that kind of cultural curiosity. “It’s made me empathetic to different viewpoints,” she said.

Mr. Mateo would soon show he could be culturally adaptable, too. When he met Ms. Chang’s parents for the first time over Memorial Day weekend in 2013, while the diplomat and his wife were visiting New York, he at first had trouble connecting.

Both kept up their efforts to communicate, though, over fried chicken at restaurant Pies ‘n’ Thighs in Brooklyn. Mr. Mateo even got a few laughs in. “My dad is a pretty stoic person, but the most I see him laugh is with Josh,” Ms. Chang said. “They had a lot of nonverbal communication going on, but it worked.”

So much so that a little more than a year later, when Ms. Chang and Mr. Mateo moved into an apartment in Williamsburg, Brooklyn, together with Sully, a rescue dog they adopted, her parents didn’t object.

“Josh is cute,” said Wei-ta Chang, diminutive and, like his daughter, quick to smile. “He doesn’t speak Chinese, but he just follows along anyway. He is thoughtful and caring.”

By the summer of 2016, Mr. Mateo and Ms. Chang were settled into new careers — his at Spotify and hers as an account manager at Expedia. Talk about marriage had surfaced, but neither seemed in a rush to get engaged. Mr. Mateo floated the possibility to Mr. Chang on a trip to Taiwan that year anyway, asking and receiving permission to marry his daughter. A weekslong ring shopping expedition during which Mr. Mateo vacillated between buying what he called “an artistic, very Brooklyn” salt-and-pepper diamond or a simpler solitaire, in keeping with Ms. Chang’s minimalist taste in jewelry, followed. Then came a prolonged search for the right moment.

He plotted a spur-of-the-moment March trip to the Turks and Caicos. Ms. Chang didn’t know he had settled on the solitaire, or that he had stashed it in his backpack when they left New York.

On the morning of March 31, 2017, Mr. Mateo woke Ms. Chang at dawn to watch the sunrise. Ms. Chang was so sleepy she didn’t notice Mr. Mateo’s nervousness. But evidence of it would surface later.

“I brought a GoPro out on the beach because I wanted to record the engagement,” not just the sunrise, Mr. Mateo said. In his eagerness to finally ask Ms. Chang to be his wife, he didn’t anchor the camera in the sand sturdily. After he dropped to one knee and tearfully presented the solitaire, and after Ms. Chang also cried before saying yes, he made a discovery. The GoPro had shot only his rear end. Still, both said, it was a perfect day.

On March 8, at the Roundhouse hotel in Beacon, N.Y., Ms. Chang and Mr. Mateo were married by Jochen Chang, who was ordained by the Universal Life Church.

Beneath a huppah, and before their 115 guests and dozen combined attendants, Ms. Chang and Mr. Mateo read handwritten vows. “When we first met we jumped right in, like we were in love in another life and found each other again,” Mr. Mateo said. “I promise to continue to love you more and more every day.”

“I love your wonderful weirdness,” Ms. Chang said. “Every day I feel perfect in your eyes.”

Mr. Chang closed the ceremony with a twist on the traditional Jewish breaking of the glass. For Mr. Mateo, he said, stepping on the glass symbolizes good luck. But in Chinese, “the more the glass is broken, the more peace will be upon you,” he said, cuing Mr. Mateo to stomp, especially hard.

Where The Roundhouse hotel, Beacon, N.Y.

Down the Aisle Ms. Chang, wearing a strapless Vera Wang gown bought by her brother, was escorted by both parents to a huppah built by the groom’s father. The groom wore a tuxedo from Suitsupply that covered his sleeve of tattoos; his older sister, Ashley, purchased it.

Jet-lagged but Happy Ms. Chang’s parents flew in from Taiwan for the ceremony, though the couple will hold a second celebration for about 30 family members in Taiwan later this month. “I’m jet-lagged,” Mr. Chang said. “But we’ve been waiting 20 years for this day.”

Wedding Feast A cocktail hour and reception at the hotel followed the ceremony. Guests snacked on carvings from a whole roasted Berkshire suckling pig and concocted their own tacos at a Mexican food station before dining on short rib or cod, and devil’s food cake with vanilla buttercream.

Better Than La Colombe? At her son’s request, Randee Mateo made more than 400 chocolate chip cookies to pass out to wedding guests