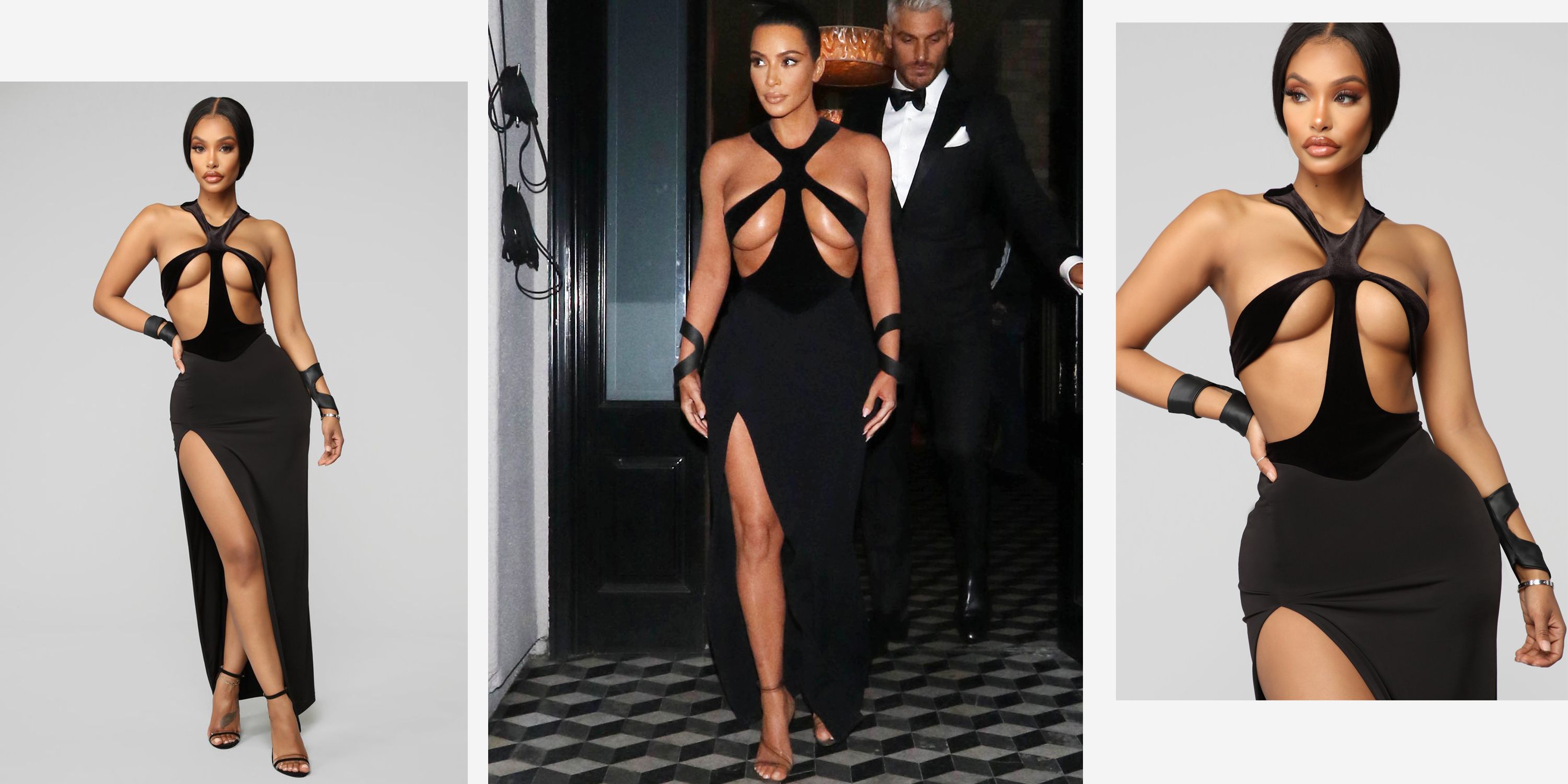 Over the weekend, Kim Kardashian stepped out in an insanely cut-out vintage dress from Thierry Mugler’s 1998 archives. Less than 24 hours later, Fashion Nova posted an identical copy of the dress retailing for $50. Fast fashion is fast, but is it really that fast?

Eagle-eyed fashion watchdogs behind the popular Instagram account Diet Prada were first to call out the suspiciously fast timing. The account then came in hot with some screenshot receipts suggesting Kardashian may have leaked her borrowed designer look to Fashion Nova before wearing it.

According to a screenshot captured from Fashion Nova model Yodit Yemane’s Instagram account, photo shoot images of the site’s Mugler knockoff were dated February 14, four days before Kim wore the gown in public. Moreover, the original file name of the photos was labeled “Kim dress,” though the product name was later dubbed “Winning Beauty Cut Out Gown” on the site.

UPDATE: See “MUGLER” story highlight for a screenshot of the date of the Capture One session (it’s labeled 02-14-19). Fashion Nova Mugler knockoff shot 4 days before Kim wore it on 02/18/19. Kim, you’ll never fess up to your sneaky lil collaborations, but we got all the receipts ?. • ⠀⠀⠀⠀⠀⠀⠀⠀⠀ At some point recently, a fast fashion photo shoot happened featuring a vintage Mugler dress that @kimkardashian just happened to wear on Sunday night to the Hollywood Beauty Awards…and yes, it appears to be a real dress, not photoshop. Ahead of Fashion Nova releasing the dress at 9pm EST tonight, house model Yodit Yemane may or may not have accidentally leaked a story 2.5 hours earlier of photo options from her shoot featuring the Mugler replica. The file names were even labeled “Kim dress” while it’s now being called “Winning Beauty Cut Out Gown” lol. This begs the question: Did Fashion Nova whip up the dress overnight in their Los Angeles atelier after seeing Kim in it or is she peddling her vintage finds to mass retailers ahead of debuting them for a calculated, timely release? ⠀⠀⠀⠀⠀⠀⠀⠀⠀ • ? : Getty • #kimkardashian #mugler #thierrymugler #manfredthierrymugler #bodycon #cutout #barelythere #strappy #straps #black #vintage #dress #velvet #fashionnova #wiwt #ootd #kuwtk #hollywood #beauty #kkwbeauty #kardashian #ecommerce #shady #smh #photoshoot #model #fashionmodel #dietprada

Diet Prada told BAZAAR.com it was first tipped off to the suspicious activity when all Kylie Jenner’s 21st birthday party looks were copied on Fashion Nova within hours of Jenner stepping out. A later Instagram caption from Kim asking “fast fashion brands, can you please wait until I wear this in real life before you knock it off?” added fuel to the fire, “Her [Kim’s] glib attitude towards Missguided in her caption for the gold Yeezy dress seemed fishy…especially considering it’s a knockoff of her husband’s work and he apparently wrote her a $1,000,000 check to turn down a fast fashion collab,” Diet Prada said.

Hey Kim, we're onto your little game. Just when you thought nothing would top the fake-out "confession" of Kendall's Proactiv ad, the Kardashians do it again. @kimkardashian posted a picture of herself in an old dress Kanye made for her, presumably under his Yeezy label, with a pithy caption pleading for fast fashion brands to let her wear the dress before knocking it off. ⠀⠀⠀⠀⠀⠀⠀⠀⠀ ⠀⠀⠀⠀⠀⠀⠀⠀⠀ Three hours after her post, it popped up on quick-turn retailer @missguided , who has entire website sections dedicated to kopying the Kardashian style. Last year, Fashion Nova famously dropped their own versions of Kylie's custom birthday looks mere hours after she posted them. The lack of transparency around celebrity endorsements is a big problem facing social media. We think we smell a rat. Dieters, is this a thinly veiled collab, or does Missguided have a secret atelier of magical elves making stretchy dresses round the clock and shooting them on Kim K doppelgängers? Lol. ⠀⠀⠀⠀⠀⠀⠀⠀⠀ • ⠀⠀⠀⠀⠀⠀⠀⠀⠀ #kimkardashian #missguided #literally #fastfashion #collab #transparency #designer #yeezy #ye #kanye #kimye #collaboration #magicalelves #speedtomarket #retail #luxurybrand #kardashian #kuwtk #fashionnova #ootd #wiwt #dietprada 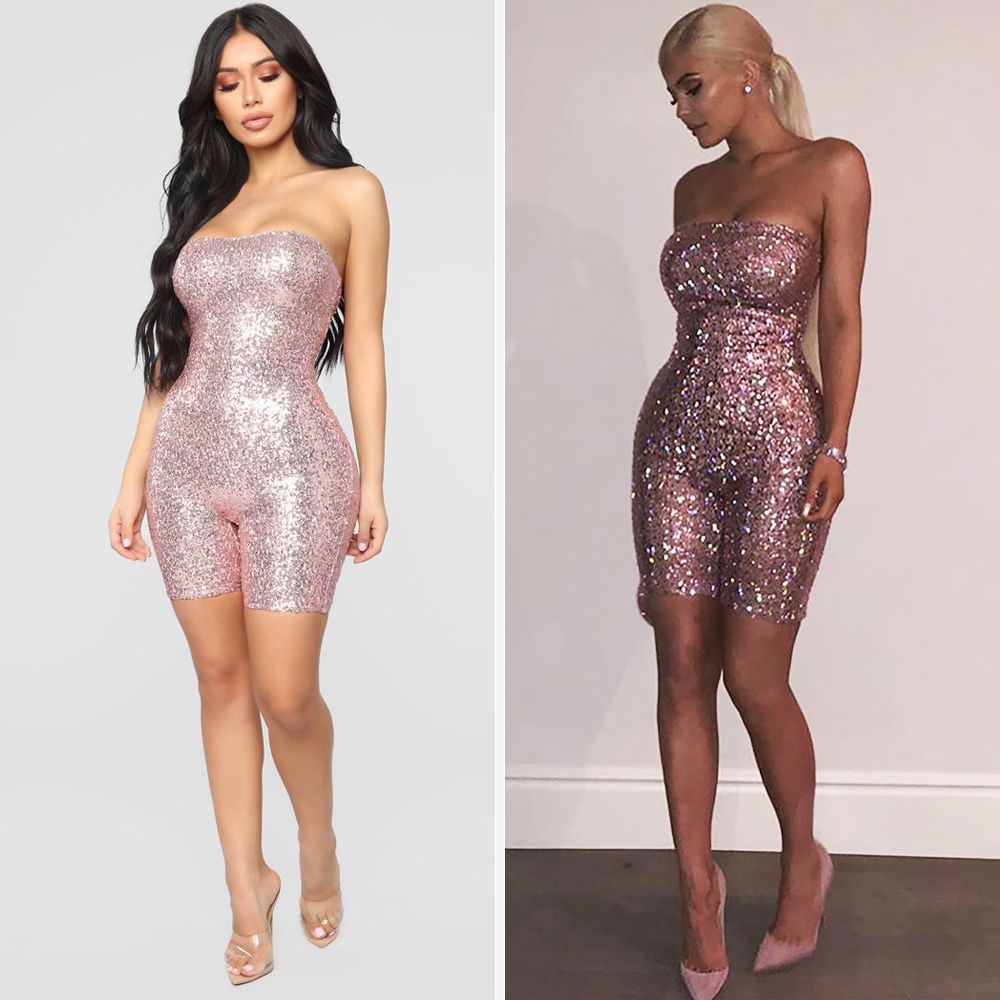 After the allegations of peddling her looks to Fashion Nova, Kim took to Twitter to defend herself, putting the onus on fast fashion companies. In a string of tweets, she called the knockoffs “devastating” and concluded by saying, “I don’t have any relationships with these sites. I’m not leaking my looks to anyone, and I don’t support what these companies are doing.”

Could sites like Fashion Nova and Missguided just be extremely fast in shooting their replicas? Diet Prada tells BAZAAR.com: “It’s possible, but the date stamp on the file names of the images from the shoot are telling. Both Kris and Kylie Jenner have also already officially partnered with Fashion Nova, so the family connection is there.”

If Kim is secretly leaking her designer outfits to fast fashion sites ahead of time, are there legal implications? It’s complicated, but Julie Zerbo, attorney and founder of The Fashion Law, says it’s technically legal, “I don’t know of any embargo on the imagery of borrowed or lent designer looks, so I don’t think there would be a contract issue.”

It could, however, be an issue if Kim does in fact have a secret deal with Fashion Nova or Missguided. “If there is a partnership of some kind, then that would need to be disclosed by both the celebrity endorser and the brand itself,” Zerbo explains.

Another potential red flag: “What might be an issue is if Kim and Fashion Nova or Misguided are working together to create these looks in connection with her posting something on Instagram, like ‘fast fashion companies please don’t copy this look’ and mentioning a specific one and then that specific one turning around and promoting it on Instagram. That is very likely one of the ‘material connections’ that the Federal Trade Commission would be hoping to see disclosed for the benefit of consumers,” Zerbo adds. 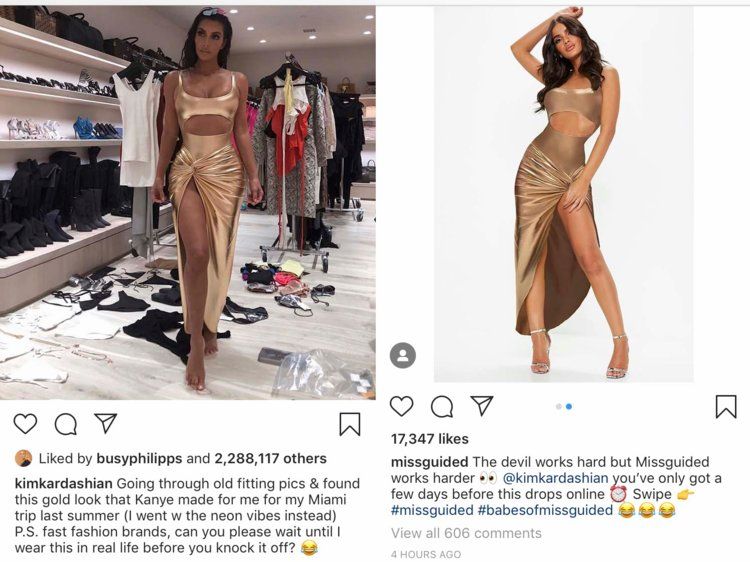 Ultimately, one has to ask why Kim, who has worked hard to be taken seriously in the fashion world, would jeopardize her designer connections for the sake of a Fashion Nova partnership? Diet Prada speculates that because “Kim is the queen of monetizing her physical appearance, it makes sense that the rewards of a fast fashion partnership would outweigh the risk. In this case, she probably got the dress from an archival fashion dealer and thought it was fair game as opposed to knocking off a contemporary designer who created something custom for her, or is currently selling on the market. I think she may have underestimated how beloved Thierry Mugler’s work is.”