JENNY Marr will have her hands full this Christmas – after giving birth to surprise QUADRUPLETS. 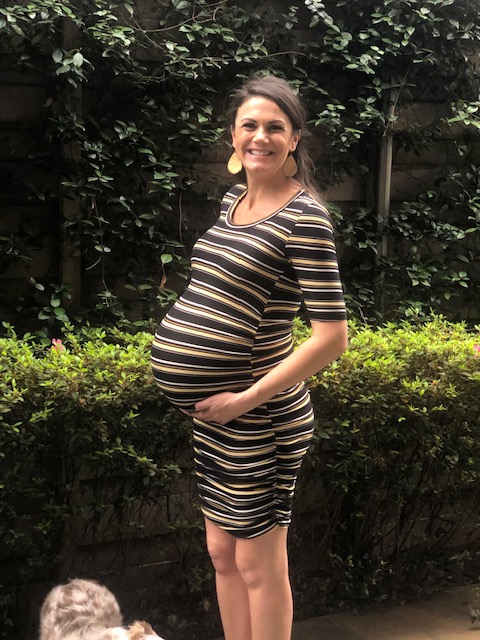 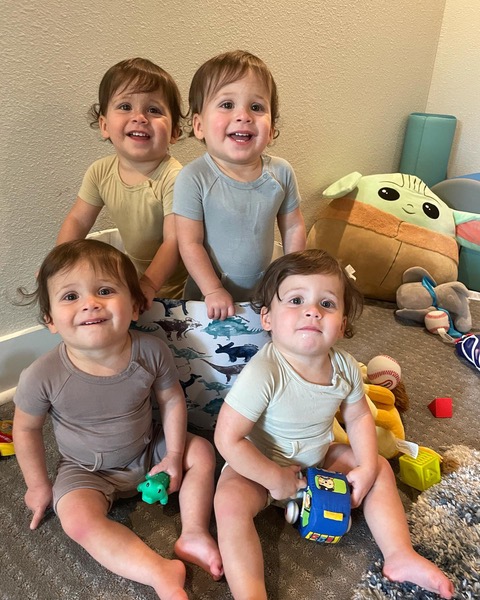 It has thrown life into a whirl for Jenny and her hubby Chris, who changes 24 nappies a day and spends a massive $300 [ £225] a week on grocery shopping.

Jenny said: "Life has completely changed for Chris and I now that we suddenly have four babies to look after.

"We go through 1.5 gallons of milk every couple of days, and I do try and cook homemade food, but sometimes I’m so exhausted that I just heat up something that’s frozen for Chis and I to eat.’

The foursome were a massive shock for Jenny and Chris who had been  trying for a baby for a few months.

"We had been together for four years after meeting in a local pub," said Jenny, 36, who lives in Texas, USA.  "We had enjoyed holidays and time relaxing together, but now we had decided that we wanted to have a baby together.

"In March 2019, we had decided that we wouldn’t use any contraception, and if I fell pregnant, we would be thrilled. It only took six months before I was staring at a positive pregnancy test, and telling Chris the good news."

The couple were thrilled, and couldn’t wait to meet the new addition to their family. But a few weeks later she went for a scan, and received some startling news.

"She turned the screen away from me and told me everything was fine, but she was still looking hard at the monitor.  So I knew there was something up.

"I started laughing and nervously asked her if I was having twins. But nothing could have prepared me for her answer.

"No, you’re having triplets,’ she told me, finally. I saw Chris had gone a ghostly shade of white, and with a thump he passed out on the floor. 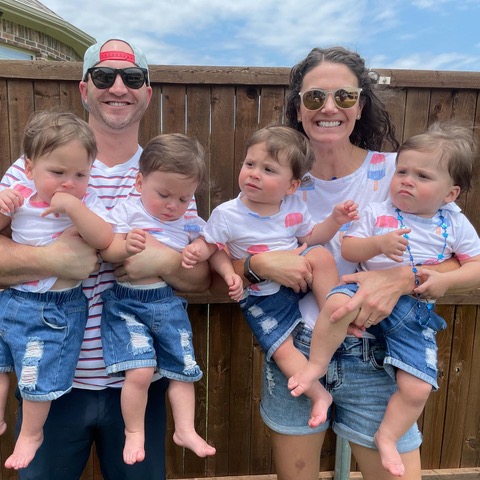 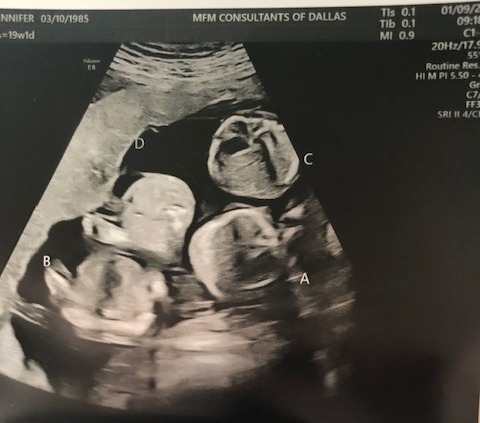 "One of the nurses helped him up and gave him a glass of water. He was still in shock as he came to, sitting on a chair.

"I was still lying on the scanning table in complete shock too. I had thought I was pregnant with just one baby, now I was being told there was three in there.

"It’s the first time in my career I’ve ever told anyone they are having naturally conceived triplets,’ the sonographer told us."

Still in shock, the couple drove home. Because Jenny was pregnant with multiples they had to see a specialist the following week.

"They wanted to do another scan too," said Jenny. "So once again I got on the scanning table, this time more prepared to see three heartbeats. The scanner went over my stomach, and the nurse looked at me in shock. ‘You’re actually having four babies,’ she said. ‘Not three.'

I saw Chris had gone a ghostly shade of white, and with a thump he passed out on the floor. I had thought I was pregnant with just one baby, now I was being told there was three in there.

"This time Chris and I both laughed, and he didn’t faint straight onto the floor. We just found it funny. ‘We’re not coming back next week,’ we told the nurse, laughing. I was pleased that it was going to be four, as I’ve never liked odd numbers.

"‘They will be able to pair up,’ I told Chris happily. ‘There is never going to be an odd one out.’

"But the doctor told us that our case was incredibly rare – not only was I expecting quadruplets….but they were all identical! They were all sharing one placenta. The chances of it happening were a staggering 15 million to one!

"We couldn’t believe it. I’d been pregnant with one embryo, which had split very early on into my pregnancy, and then both halves had split again. The hospital told us that there were only 75 recorded cases of it ever happening in the world before.

"It was a very risky pregnancy. The doctors told Chris that the babies had less than a 0.01 per cent chance of them all surviving. He kept that awful secret to himself all the way through and never told me, as he didn’t want me to panic about it. If I’d known, I would have been distraught. 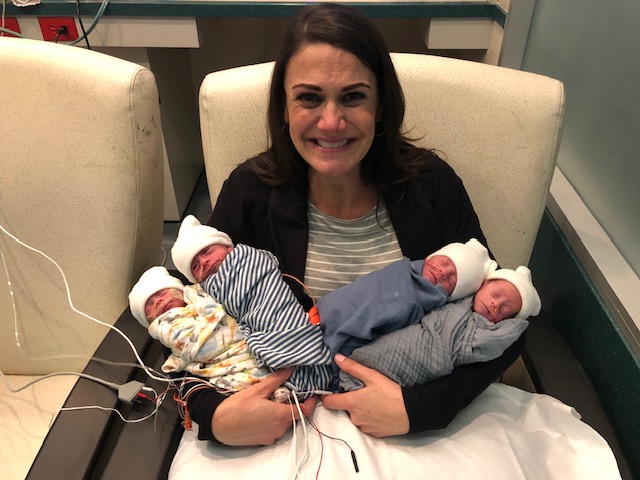 "I always knew it was very risky, and I had to be scanned every week, but I never knew just how much the odds were stacked against them. Every scan I dreaded hearing the doctor’s voice telling me that one or more of the babies hadn’t survived.

"But at each scan, there were the four little heartbeats pumping strongly away. They were really hanging on by a miracle."

Then in March last year when Jenny was 28 weeks pregnant, she went for my weekly scan and was told everything was fine. But then two days later she woke up at 1am with contractions.

"I rang the hospital and was told to come in straight away.,’ said Jenny. "Chris and my mum drove me to the hospital and doctors tried to stop my labour, but it was too late. The babies were on their way."

The foursome were delivered by caesarian, Harrison weighing 2Ib6, Hardy at 2Ib10, Henry at 2Ib6, and finally Hudson at 1Ib15.

Amazingly his three brothers all needed oxygen support afterwards, but Hudson didn’t, despite being the tiniest one.

They all had to be tube fed because of their size, and they stayed in hospital until the end of May. "Lockdown had started, but luckily we were given special visiting rights, and both Chris and I could see the babies every day," said Jenny.

"Hardy came home first, and he was only 5Ibs. Chris and I were so nervous that first night, and barely slept a wink. Then the other three came home shortly afterwards, and since then, our house has been crazy.

"It’s been one whirlwind of nappy changing, feeding and sleeping. But we have got them into a routine where they all nap at the same time, which is great. People ask how we tell them apart, and when they were just weeks old, I would line them up in the order of who was born first, so I knew which one was which.

"But now, even though they look identical, to me, they have four individual faces. And their personalities tell them apart. Harrison is the big brother and likes all the attention, Hardy is so funny and relaxed, he just goes with the flow.

"Henry has an infectious smile and loves going outside, and Hudson is the little mother hen, and is always checking everyone is ok.

"It’s going to be a great Christmas this year – so different to when it was just Chris and I. We are going to spend it together just as a family watching Christmas movies together – and the babies are going to be so excited when they see the lights and decorations.

"Life is so hectic for us now, we will need to spend Christmas definitely relaxing."

For more real life stories, this dad shared the sneaky way he gets his kids to behave like angels from now until Christmas.

And this funeral director revealed what happens to people’s bodies after they die and the secrets customers never know.

Plus this woman fell in love with a jailbird she hadn’t met – she's had his initial tattooed & he showers her with gifts.