Teresa Giudice got in some quality time with her look-alike daughter, Gia, and posted a photo from the outing on April 13.

Gia Giudice had a girls’ night with her mom, Teresa Giudice, this week, and she looked amazing while dressed up for the outing! The ladies hit up American Dream in New Jersey, and posed for a photo with the New York City skyline in the background. Gia looked like the spitting image of her mom, albeit with lighter hair. She wore a snakeskin, cutout bodysuit, which she paired with leather pants and boots.

Meanwhile, Teresa also looked fierce for the girls’ night out. She rocked black pants and a black leather jacket, along with sky-high snakeskin heels. Her dark hair was styled in loose waves and parted in the middle. “Love having you by my side,” she captioned the pic, along with a red heart emoji. She also used the hashtag #firstborn, as Gia is the oldest of Teresa’s four daughters. With her ex, Joe Giudice, Teresa also has 17-year-old, Gabriella Giudice, 16-year-old Milania Giudice, and 12-year-old Audriana Giudice. 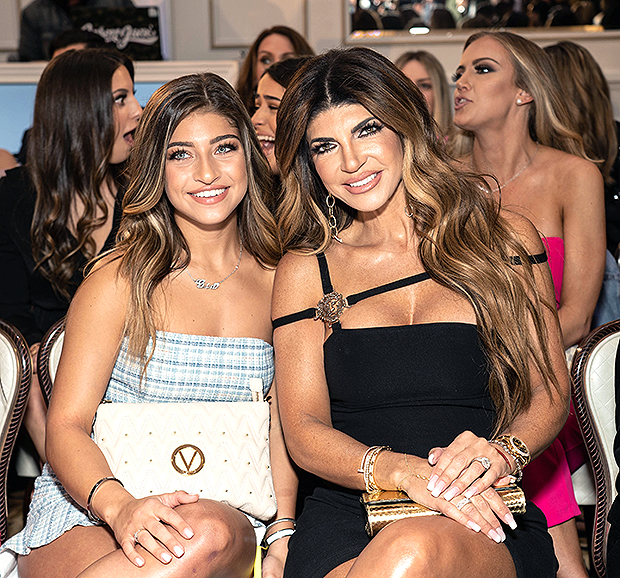 Gia has literally grown up in front of fans’ eyes, as her mom has been a cast member on The Real Housewives of New Jersey since 2008. In recent years, since Gia has become an adult, she’s been proudly showing off her evolving sense of style on social media and on RHONJ. On the current season of the show, Gia has also been more vocal and involved in some of the major storylines.

Teresa’s relationship with her now-fiance, Luis Ruelas, has been a big storyline this season, and on the March 8 episode, Gia expressed some concern about her mom moving too fast in the romance. “In any relationship you’re obviously going to be in the honeymoon stage for the beginning,” Gia warned her mom. However, Teresa insisted that she had nothing to worry about. Teresa and Luis wound up getting engaged in Oct. 2021 and are set to wed this summer.