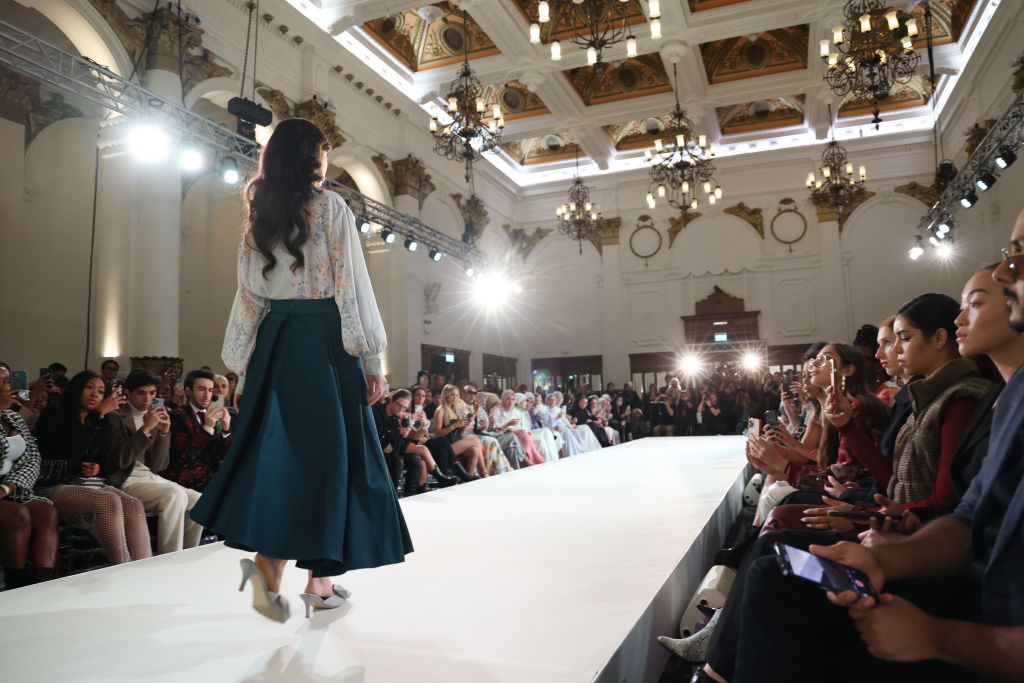 From models cocooned in zip up jackets that would make South Park’s Kenny proud, to low – and we mean low – rise jeans, the designers at London Fashion Week brought glamour and fun to the runway.

While some shows were cancelled due to the Queen’s death, the week went ahead – while still paying tribute to Her Majesty.

Some designers opened their shows with all black outfits, while JW Anderson – the only designer to ever have had the Queen on his frow – showed a t-shirt that read: ‘Her Majesty The Queen, 1926-2022, Thank you.’

And as usual, the incredible creations gave us a hint as to what trends we might find in our wardrobes for SS23.

Here, we pick out the five hottest trends from the week’s shows.

We know, if only Miranda Priestley could see. But florals have taken over the runway at LFW.

And of course, Peckham based designer Richard Quinn displayed his signature florals in the week’s hotly anticipated finale. Models were adorned in graphic floral print capes and jumpsuits.

It’s no secret that early 2000s fashion is back, and the designers at LFW did not disappoint.

We hate to break it to any millennials reading this, but low rise waistlines were very much a thing, displayed in the form of flippy skirts and flares.

Ballet flats are still threatening to trickle down to the high street as there were seen on the feet of models walking for JW Anderson and Molly Goddard. But never fear, if we have to contend with 00s footwear, at least Simone Rocha is bringing back the iconic jelly show.

We also saw the micro-mini skirt a la Paris and Nicole, and the piece de resistance, JW Anderson included graphic dolphin motifs on his bodysuits.

Nothing reminds us of Y2K quite like the humble dolphin.

If Emily Ratajkowski wears something, you know it’s going to be big news.

The supermodel closed Nensi Dojaka’s show in a sheer crimson floor length gown, which featured a mesh bodice with frills, and see through skirt.

We saw sheer panelled tops and cut outs at Jawara Alleyne and Standing Ground too.

From the millennial shade to barbiecore, pink has been a firm favourite for many a season now, and after the latest crop of shows at LFW, it’s clear the colour is here to stay.

But instead of the hot pink trend of late, we’re seeing more muted tones.